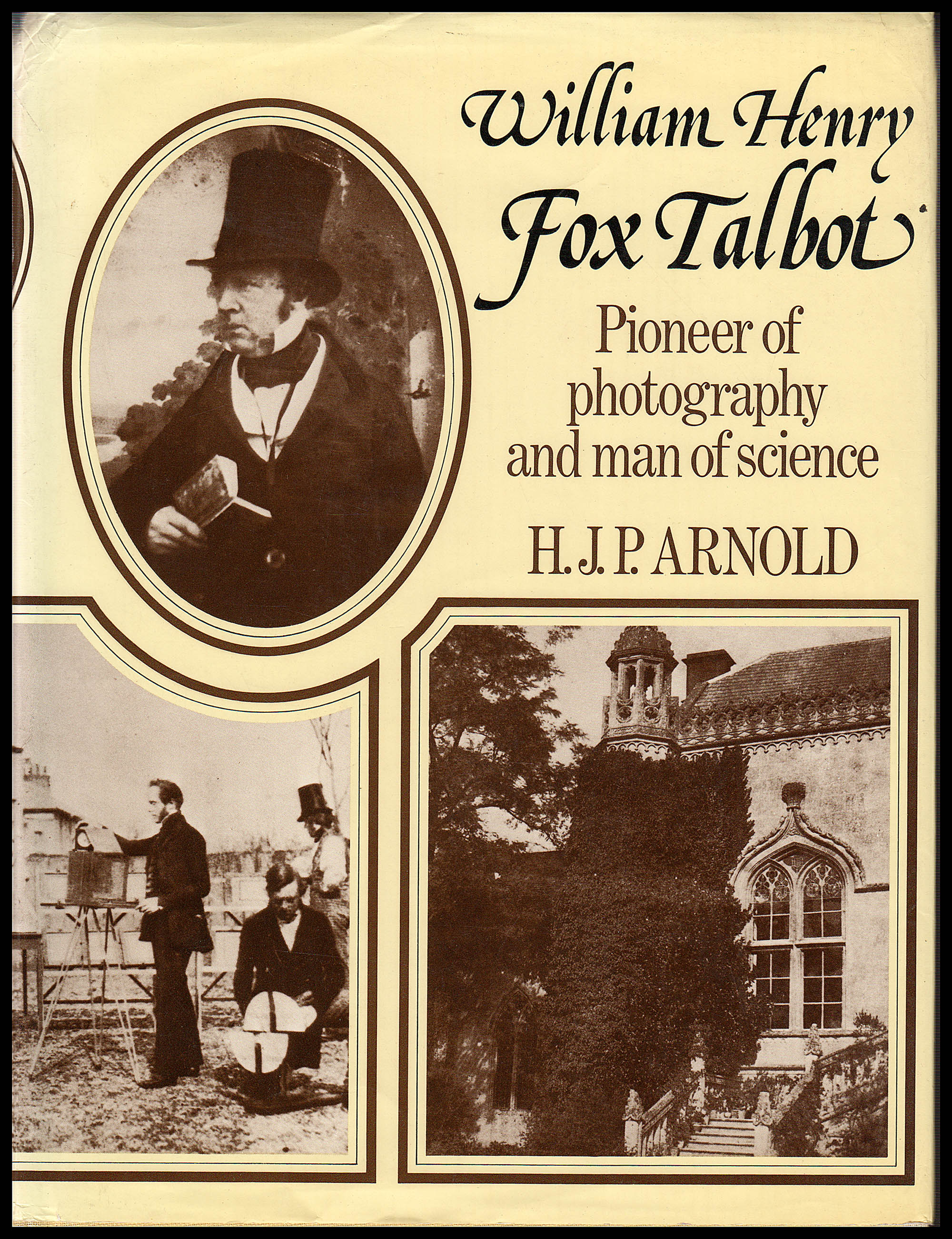 The most detailed biography of Talbot remains the late H.J.P. ‘Doug’ Arnold’s 1977 William Henry Fox Talbot: Pioneer of photography and man of science (London: Hutchinson Benham).   Several aspects of Arnold’s varied career came to bear on this text.  A graduate of Wadham College, Oxford, at various times Arnold was the Soviet Affairs Correspondent for The Financial Times, the Head of Public Relations for Kodak Limited, the founder of Space Frontiers Limited, and an avid Roman re-enactor.  We formed a friendship over matters Talbot and in 1979 when he visited me in Austin, Texas, we talked about how his book had come about.  Kodak Ltd. had supported him for eighteen months to work full-time on this project. 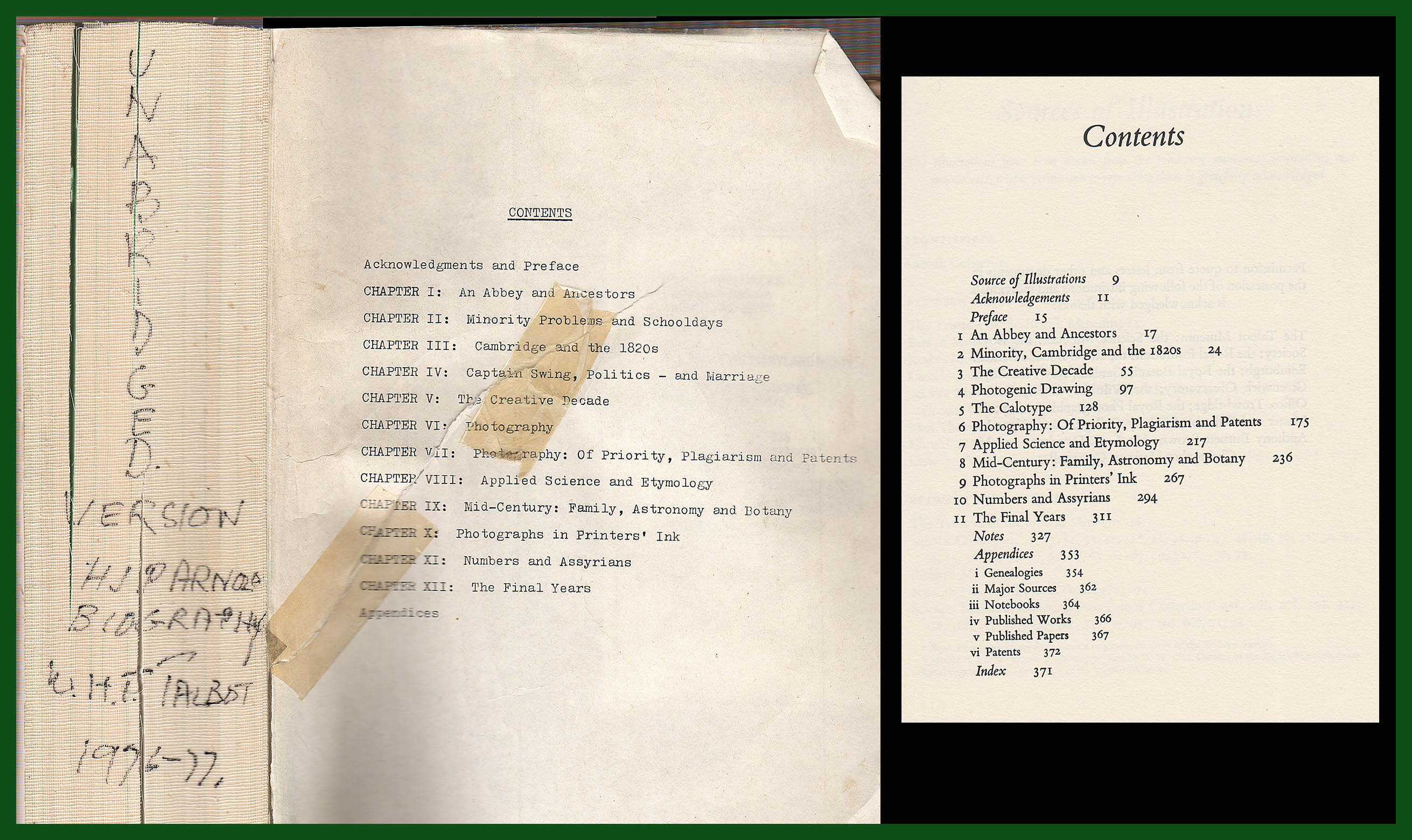 When it came time to publish, however, about 30% of Arnold’s text was cut.  The publisher, and presumably the sponsor Kodak, felt that there was too much ‘extraneous’ material and that the story of photography needed to be more prominent.  Nearly all the cuts fell in the non-photographic sections.  A comparison of the contents pages of the full typescript (pre-word processing days!) and the published book above is revealing, for it demonstrates where the non-photographic material was combined and condensed. Although photography is obviously central to the goals of the Catalogue Raisonné, the analytical and research apparatus being established surrounding these images explores the full context of Talbot’s wider interests.   A start on this sort of analysis was made at a 2010 conference in Cambridge: ‘William Henry Fox Talbot: Beyond Photography.’   Experts from diverse fields examined non-photographic aspects of Talbot’s thinking, including his contributions to mathematics, botany, and the study of Assyrian cuneiform. We are fortunate that Talbot left such an extensive archive for posterity.  Some of this was self-conscious: at the age of eight, young Henry Talbot wrote to his stepfather: “tell Mamma & every body I write to keep my letters & not burn them.”  The Fox Talbot Archive recently acquired by the Bodleian Libraries contains a wide variety of artefacts that – at least on the peripheries – serve to illuminate the story behind many of Talbot’s interests, and hence the nature of his photographs.  It is a wonderful microcosm of 19th century life and concerns and its physicality provides evidence often lacking in the written record.  The Archive is a separate undertaking from the Catalogue Raisonné, but they complement each other and together they promise to provide a much greater understanding not only of Talbot himself, but also the period and social context in which he lived. 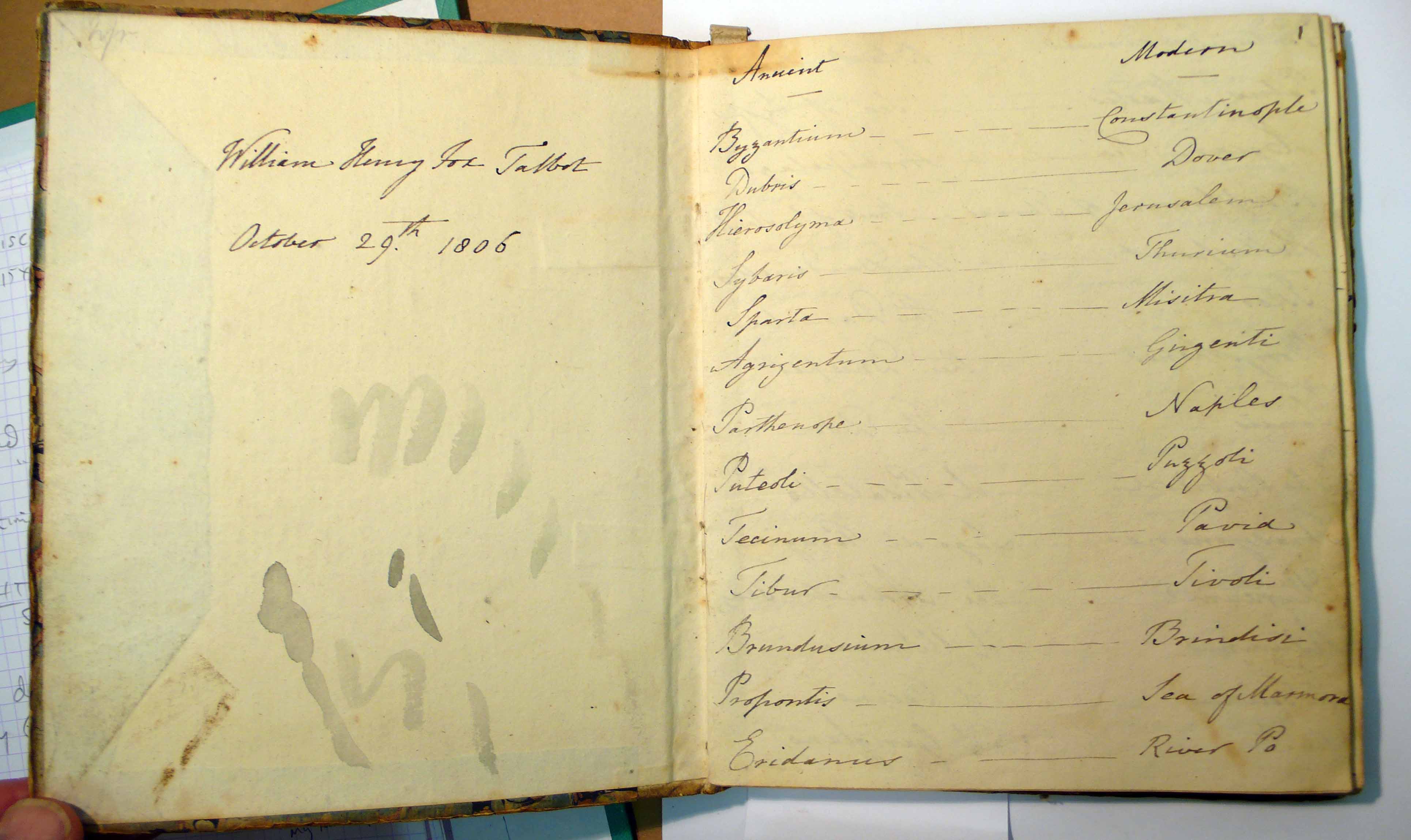 Perhaps the greatest influence in Henry Talbot’s life was his mother, the Lady Elisabeth Theresa Feilding, née Fox Strangways (1773-1846).  Judged not the prettiest of her sisters, there was no doubt about her powerful intellect and standing in society.  Since Henry was only six months old when his father died, it fell to Lady Feilding to raise and tutor him, and that she did exceptionally well. This notebook, started when Henry was six years old, is actually in the hand of Lady Elisabeth and demonstrates the early interest he had (or she imparted?) in philological studies.  This interest grew throughout his life and by mid-century Talbot was one of the leading figures in the new science of the translation of Assyrian cuneiform. 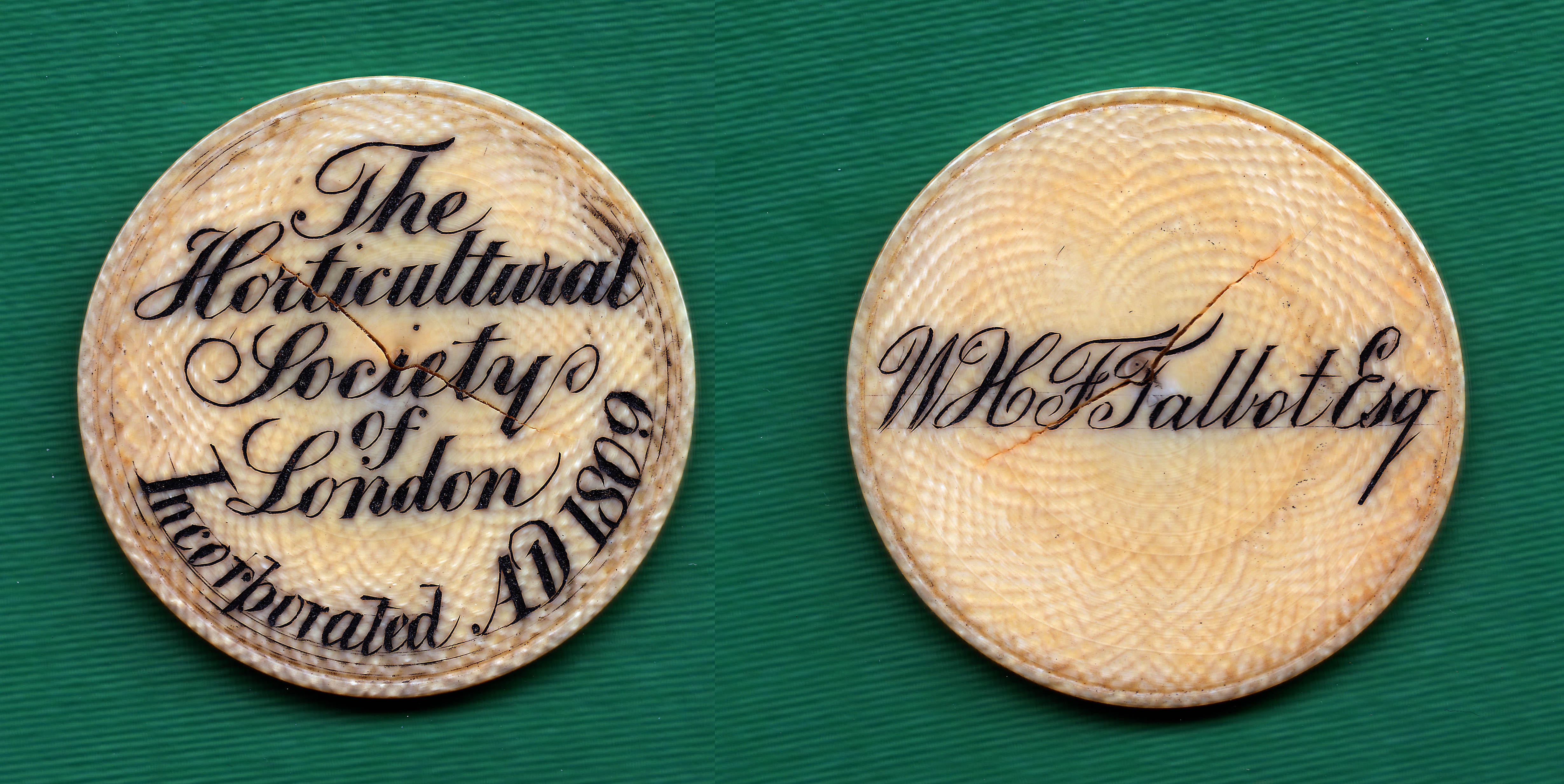 Botany and gardening strongly appealed not only to his mother, but also to other family members, especially Henry’s favorite uncle, William Thomas Horner Fox Strangways (1795-1865).  Membership in societies such as the Horticultural Society, attendance at exhibitions, and intensive work in his own hothouse and gardens intrigued Talbot.  Botany also cemented his relationships with other scientists, including the noted botanist Sir William Jackson Hooker (1785-1865) and Sir John Frederick William Herschel (1792-1871). 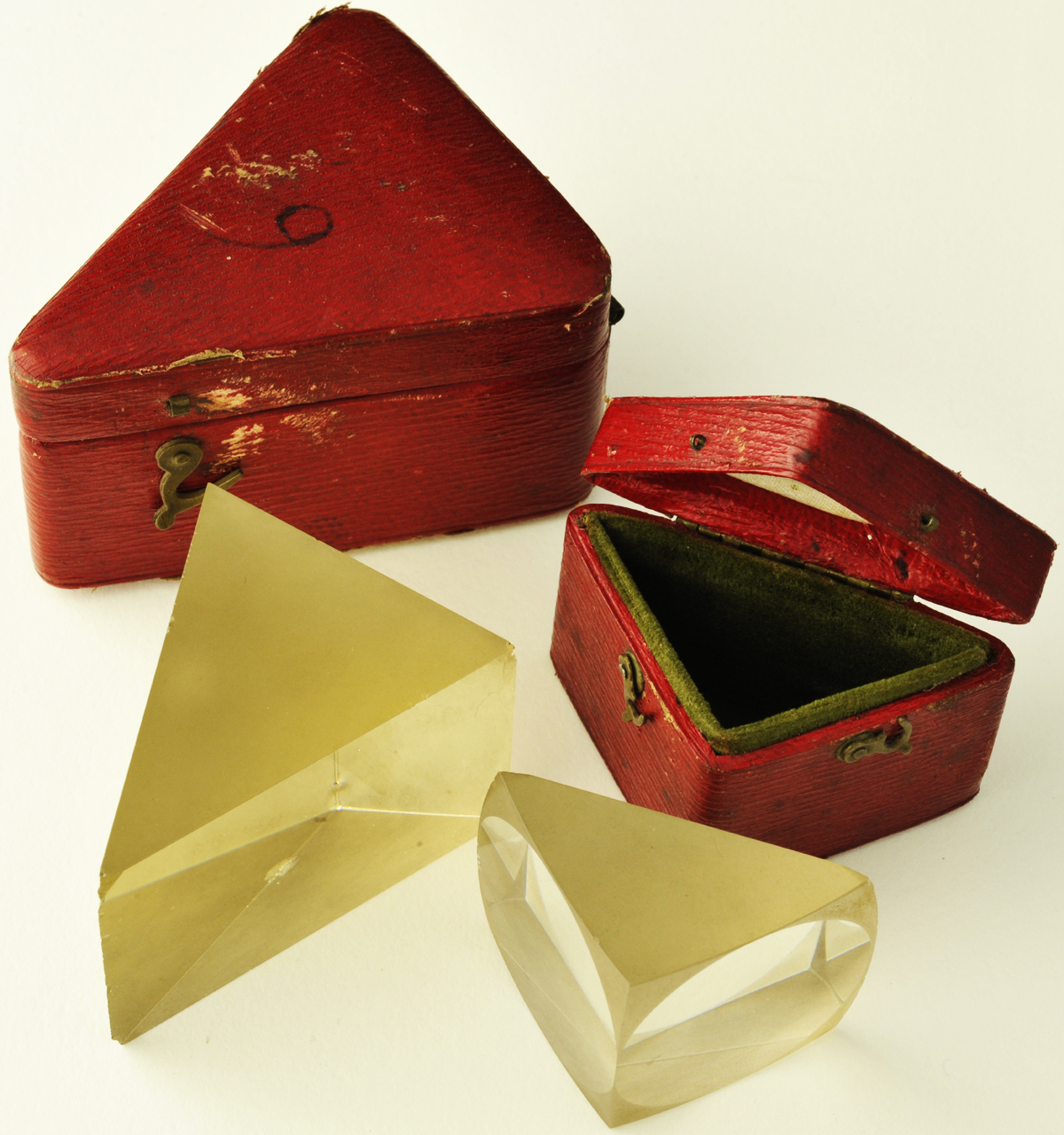 Although Talbot’s first published papers were in mathematics, meeting John (later Sir John) Herschel in Munich in 1824 ignited his interest in the physical sciences.  Herschel introduced him to one who would become a lifelong friend, Sir David Brewster (1781-1868), and Brewster’s interest in optics spurred Talbot on.  Records survive of optical instruments that Talbot commissioned, and many of his published papers centred on optics, but having some of the actual optical instruments that he used available provides promise of further in-depth study of his accomplishments. These finely-made glass prisms were clearly meant for experimental use or demonstration, rather than as part of an everyday optical tool.  Talbot marked the case on the left in ink ‘6’ and the one on the right ‘4’, which is all that is known at present about them. 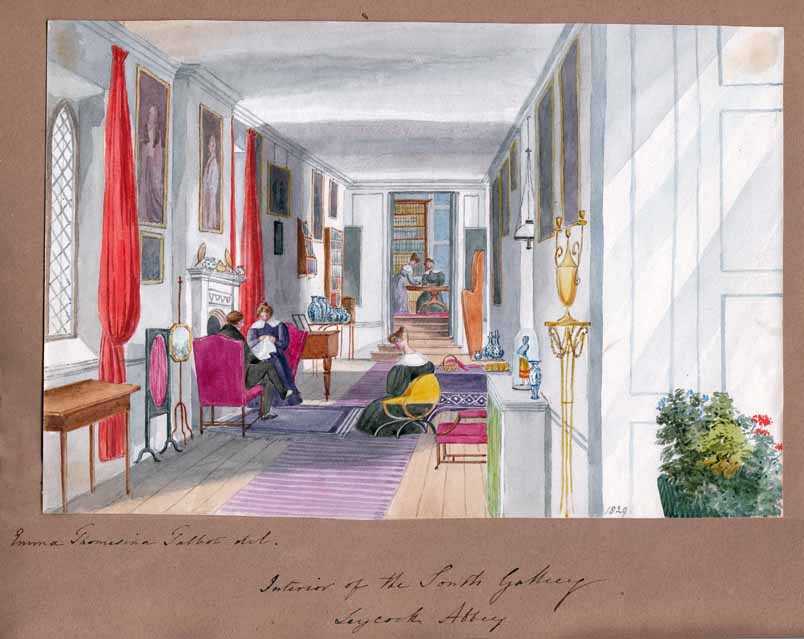 Talbot was not able to occupy his Wiltshire home of Lacock Abbey until 1827 and at first he did not particularly care for it.  However, Lady Elisabeth fell in love with the house and its grounds and slowly won him over.  He embarked on an extensive program of re-building and modernising it.  The South Gallery, home of the Oriel Window so famous in photographic history, was recently completed at the time his Welsh cousin Emma Thomasina Talbot (later Llewelyn, 1806-1881) painted this domestic scene.  If one ignores the various banners, posters and signs that now crowd the space, the gallery looks much the same today.  Talbot photographed the gallery little more than a decade after this; while no small technical achievement at a period when the art was young, it failed to supply the colours and human presence of his cousin’s watercolour.  Uncle William hoped that Talbot would start a collection of art to fill its walls, a hope never realised, but Strangway’s bequests form a major part of the old masters collections of the Ashmolean Museum and the Christ Church Picture Gallery in Oxford. 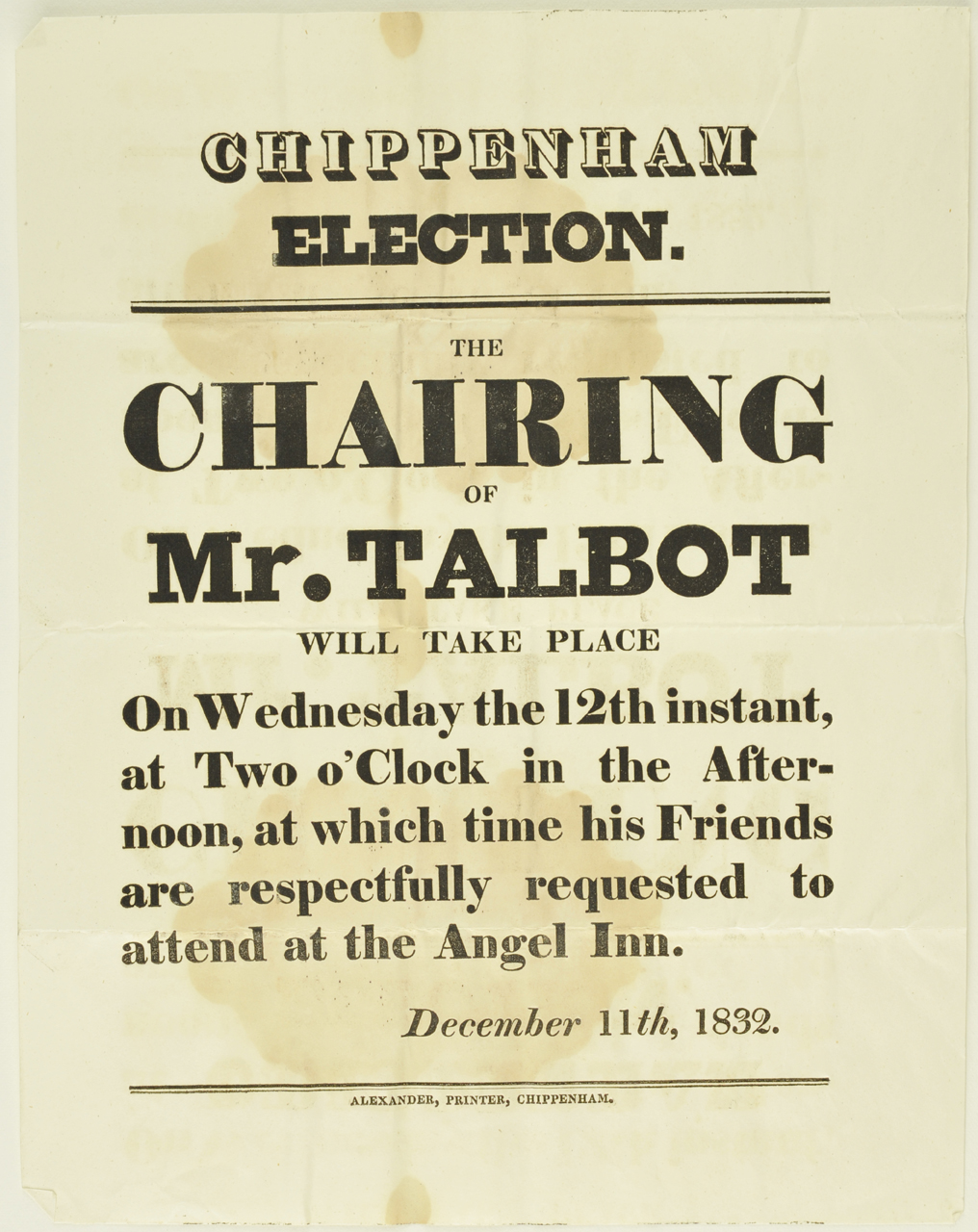 One ambition that his mother did not approve of was Henry’s foray into politics.  The 1820s had been a time of social upheaval and Talbot and his estate managers were quite skillful in guiding the village through the corn riots and other disruptions.  Perhaps out of a sense of duty, Talbot stood for and won election to the first reform Parliament in 1832, serving only one term. He met and married Constance, née Mundy (1811-1880) during this period and in October 1834, nearing the end his time in office, Talbot had his inspiration to invent photography on the shores of Lake Como in Italy. 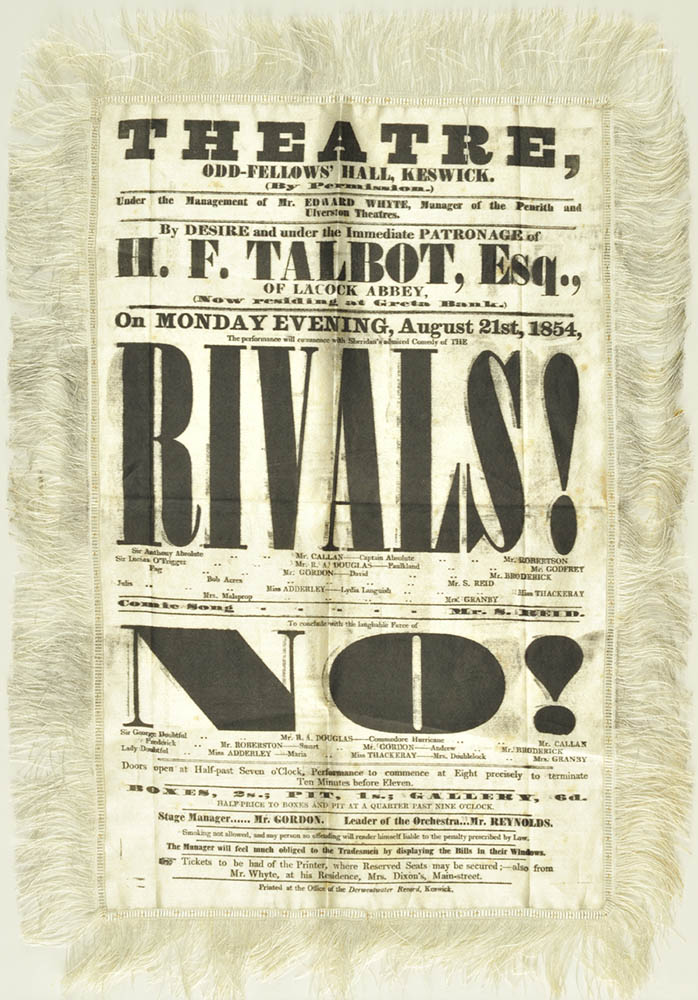 Especially when his mother was alive and his two half-sisters were courting, Talbot was plunged into a social life that was perhaps more active than he wished.  He was not a joyless figure, however, and counted a wide circle of non-scientific friends throughout his life.  This fringed invitation was a bit more of an extravagance than might be usual, but demonstrates that his achievements had to fit into their spaces in a much more crowded life. 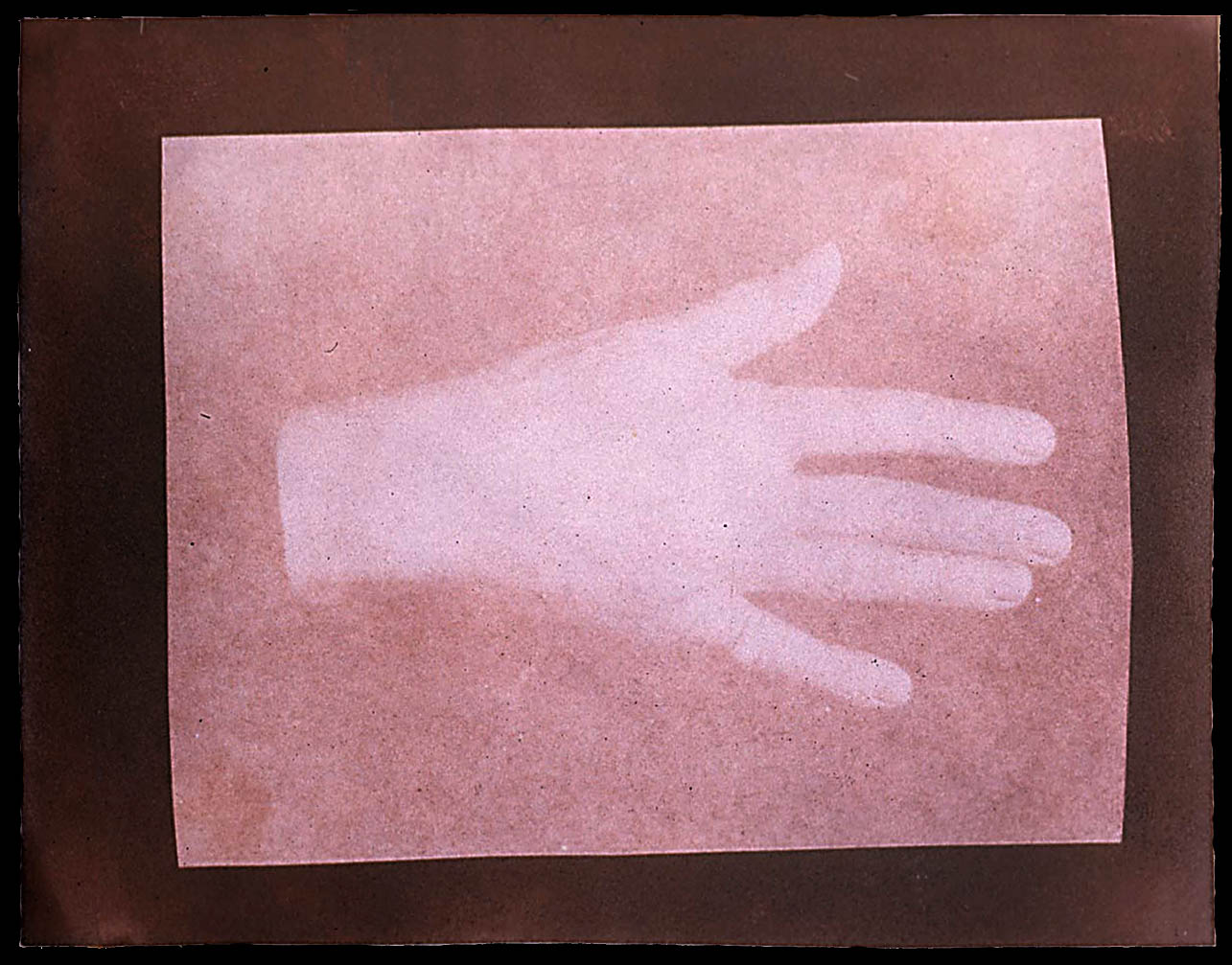 One of the most enigmatic of Talbot’s photographs is this detached hand.  He sent one print to Brewster and placed another in an album of primarily portraits that can be dated to 1841-1842.  No explanation for this bizarre composition has been found and it has been interpreted variously as a self-portrait all the way through to a Masonic sign. 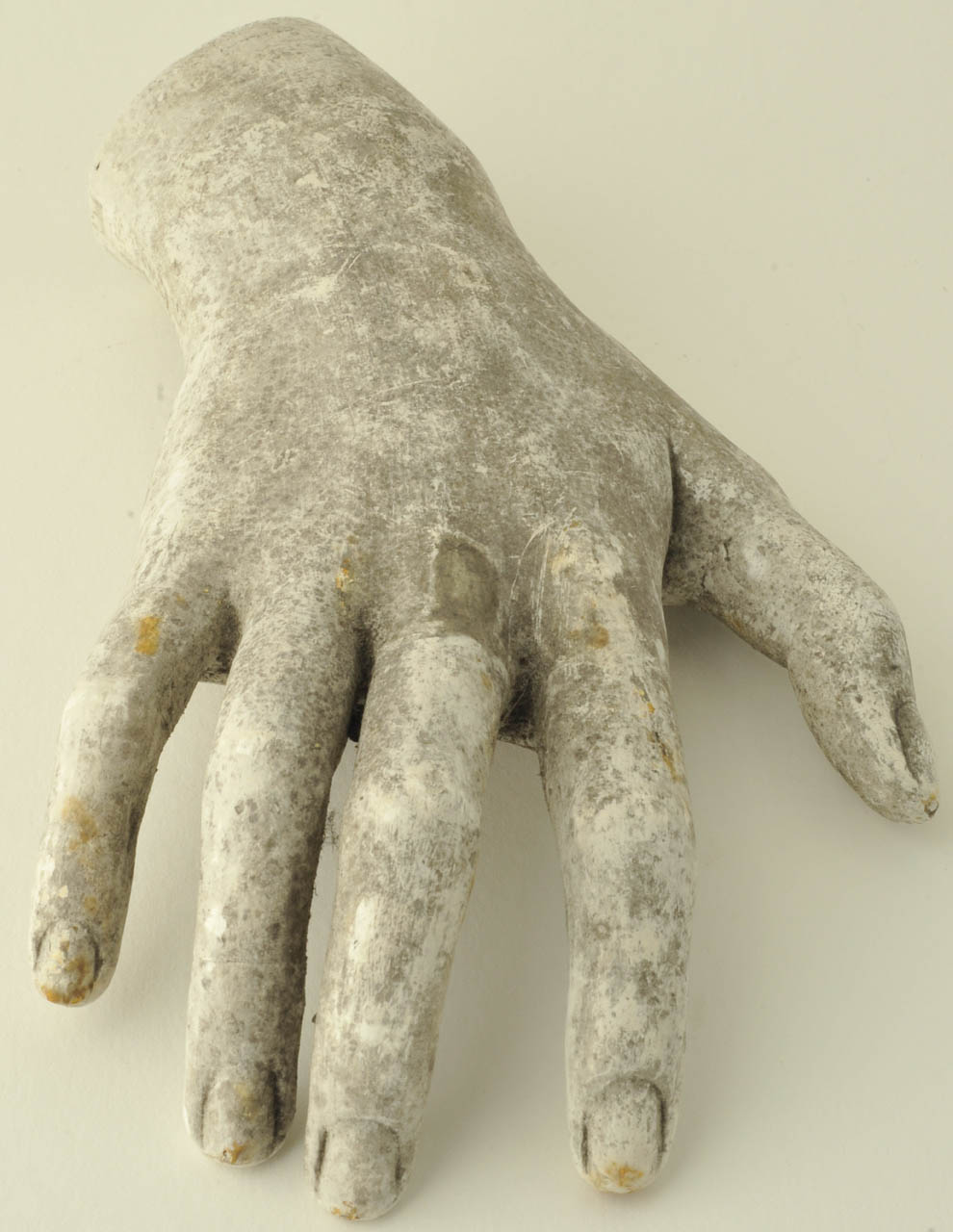 Objects such as this force us to re-examine our interpretation of photographs such as the above.  While the photograph appears to be of a live hand, is it possible that it instead is an indirect record of someone close to him?  This plaster cast is of his younger half-sister’s hand, Henrietta Horatia Maria Feilding (later Gaisford, 1810-1851).

Current plans are for the Fox Talbot Archive to be catalogued in more depth this summer.  The full development of the Talbot Catalogue Raisonné will take longer to complete, but the two projects will grow up together and undoubtedly will nurture each other.

• Questions or Comments? Please contact Prof Schaaf directly at larry.schaaf@bodleian.ox.ac.uk  • The typescript shown above is from a private collection.  Doug Arnold donated a second copy to the Humanities Research Center at The University of Texas, Austin (MS-4151).  A third copy, formerly on deposit in the Fox Talbot Museum, was generously donated by the Talbot family to the British Library, London and will soon enter their catalogue. • The spirit of the 2010 conference is reflected in a recently published collection of papers; one of the editors for this volume was Dr Mirjam Brusius, a Mellon Post-doctoral Fellow at Oxford who is concentrating on Talbot: William Henry Fox Talbot: Beyond Photography (New Haven: Yale University Press, 2013). • Talbot’s 27 May 1808 letter to his stepfather, Rear Admiral Charles Feilding (1780-1837), is one of the more than 10,000 letters included in the online Correspondence of William Henry Fox Talbot, Doc. no. 00492.• The artefacts above form part of the Bodleian’s Fox Talbot Archive: the notebook is FT10459; the medallion FT00532; the prisms are FT10510 and FT10511; the watercolour is FT00348; the broadside is FT10425; the playbill is FT10499; and the plaster hand is FT11194. • Talbot’s photograph is a salt print from a calotype negative, in an album in the Talbot Collection of the National Media Museum, Bradford; 1937-369/29; it is Schaaf 3684 in the Catalogue Raisonné.