One of the unexplained facets of Talbot’s work is the seeming contradiction between his clear reverence for ‘Nature’s drawing’ and the apparently arbitrary, indeed careless, manner in which he trimmed many of his prints and negatives. Talbot understood that all the variations in tone, splotches and other ‘imperfections’ in his photographs had solid roots in physical phenomena and one would have thought that he would have accepted these. Retouching – interfering with Nature’s hand – was anathema to him. His son, Charles Henry Talbot (1842-1916), recalled that his father’s eyesight was poor, but even deficiencies in peripheral vision cannot adequately explain why Henry Talbot was so exuberant with his shears, sometimes even to the point of appearing to be manic in his chopping. 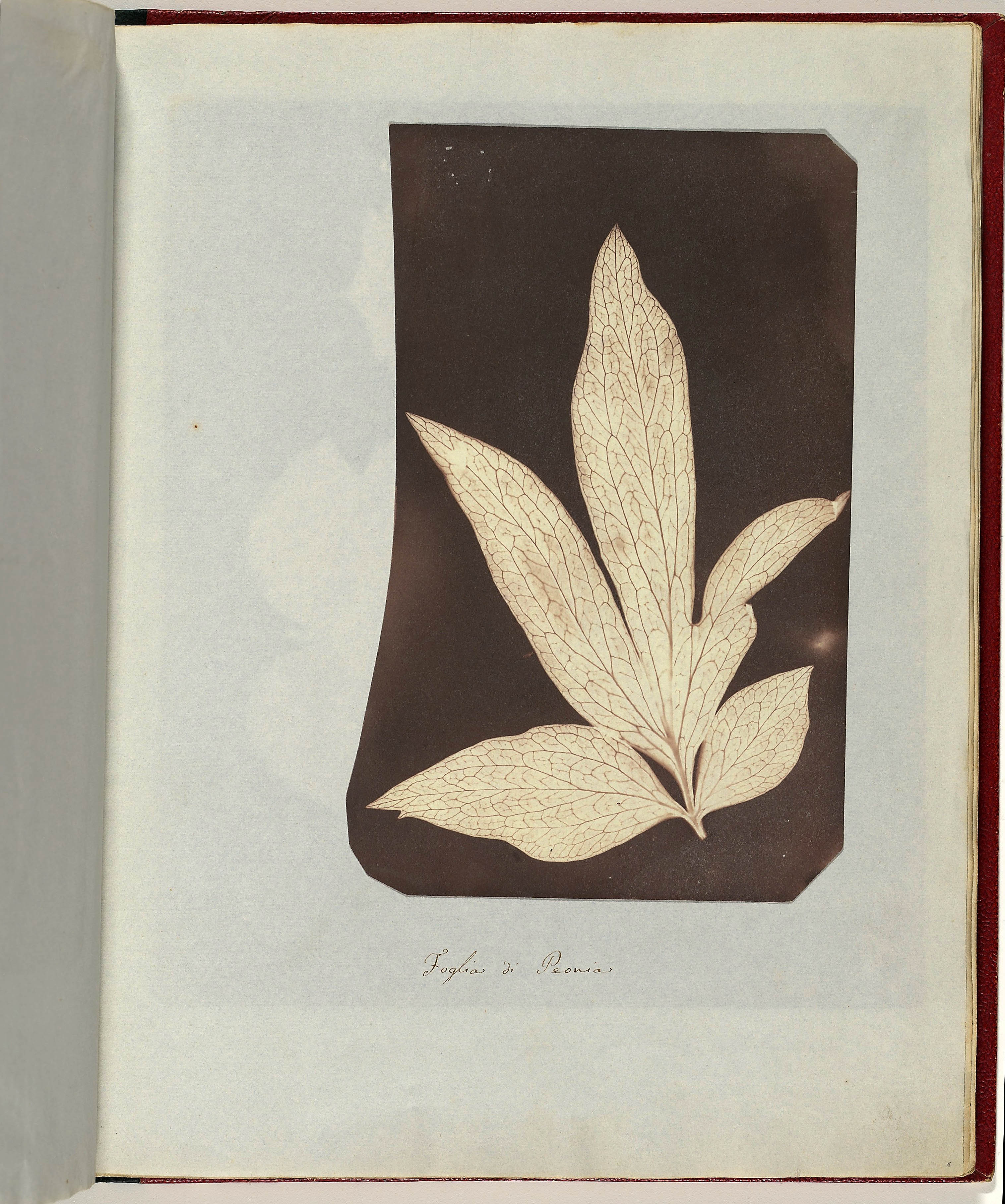 In 1839, Henry Talbot sent this photogenic drawing negative to his friend, the Italian botanist Antoino Bertoloni (1793-1869). One would be tempted to think that Bertoloni did the trimming when he mounted it in his album and labeled it Foglia di Peonia. However, there are so many other similar examples that remained in Talbot’s possession that we can safely assume that this exotic trimming was done by the artist. Did he consider the background unnecessary? Or did he find it defective? Was he only minimally aware of the odd shape? None of these are satisfying explanations. 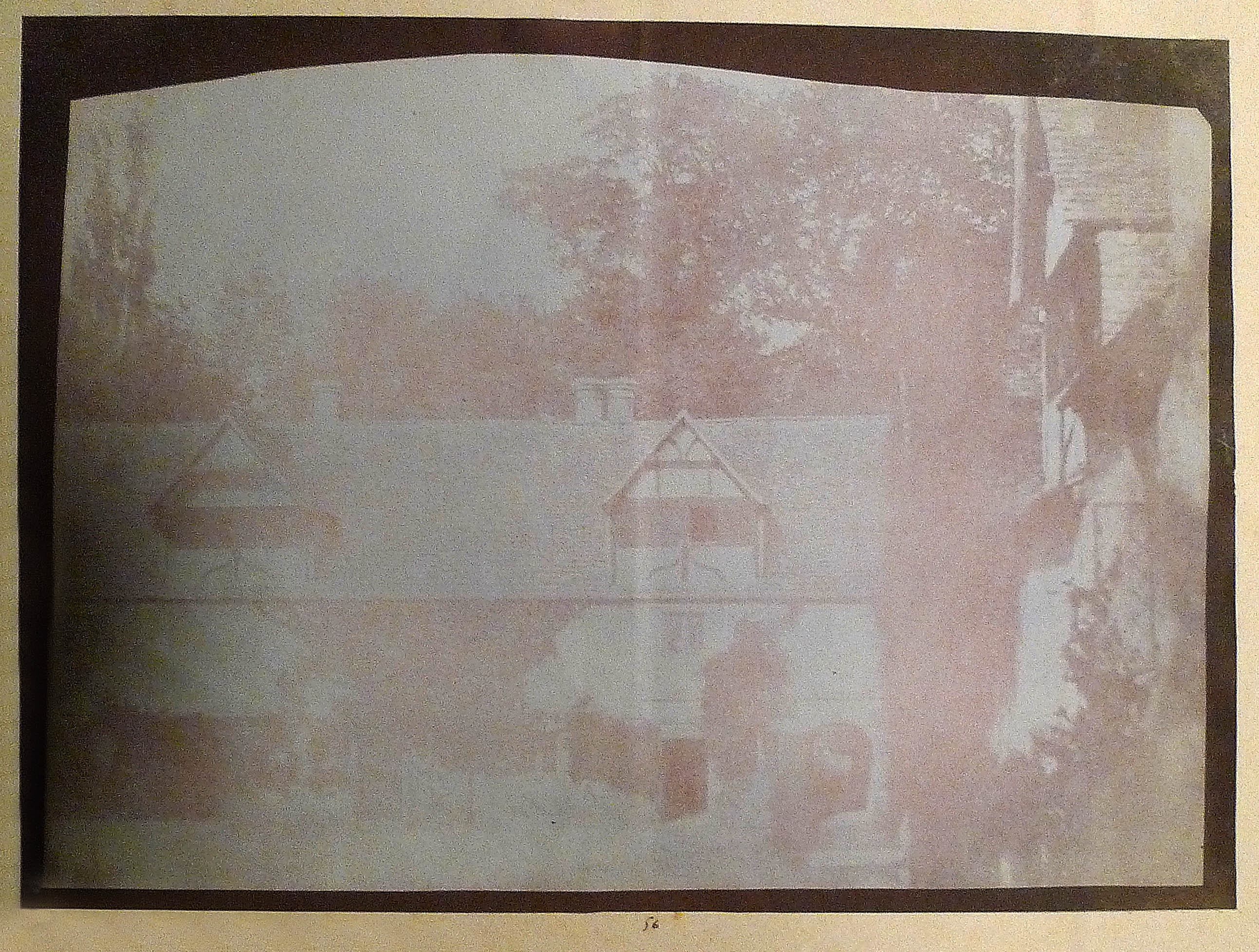 Such ebullient trimming was not restricted to photograms. In this view of the North Courtyard of Lacock Abbey from Lady Elisabeth Feilding’s bedroom window, Talbot cut the top of the original paper negative to a shape that is fascinating but highly distracting. This was a particularly important negative to Talbot, for it was taken on 14 October 1840, making it one of the first negatives to exploit his newly-discovered calotype process. Whatever faults the negative may have possessed, whatever criticism the sharp-tongued mother might have expressed about the view out her window, are the deficiencies more or less intrusive because of this trimming? 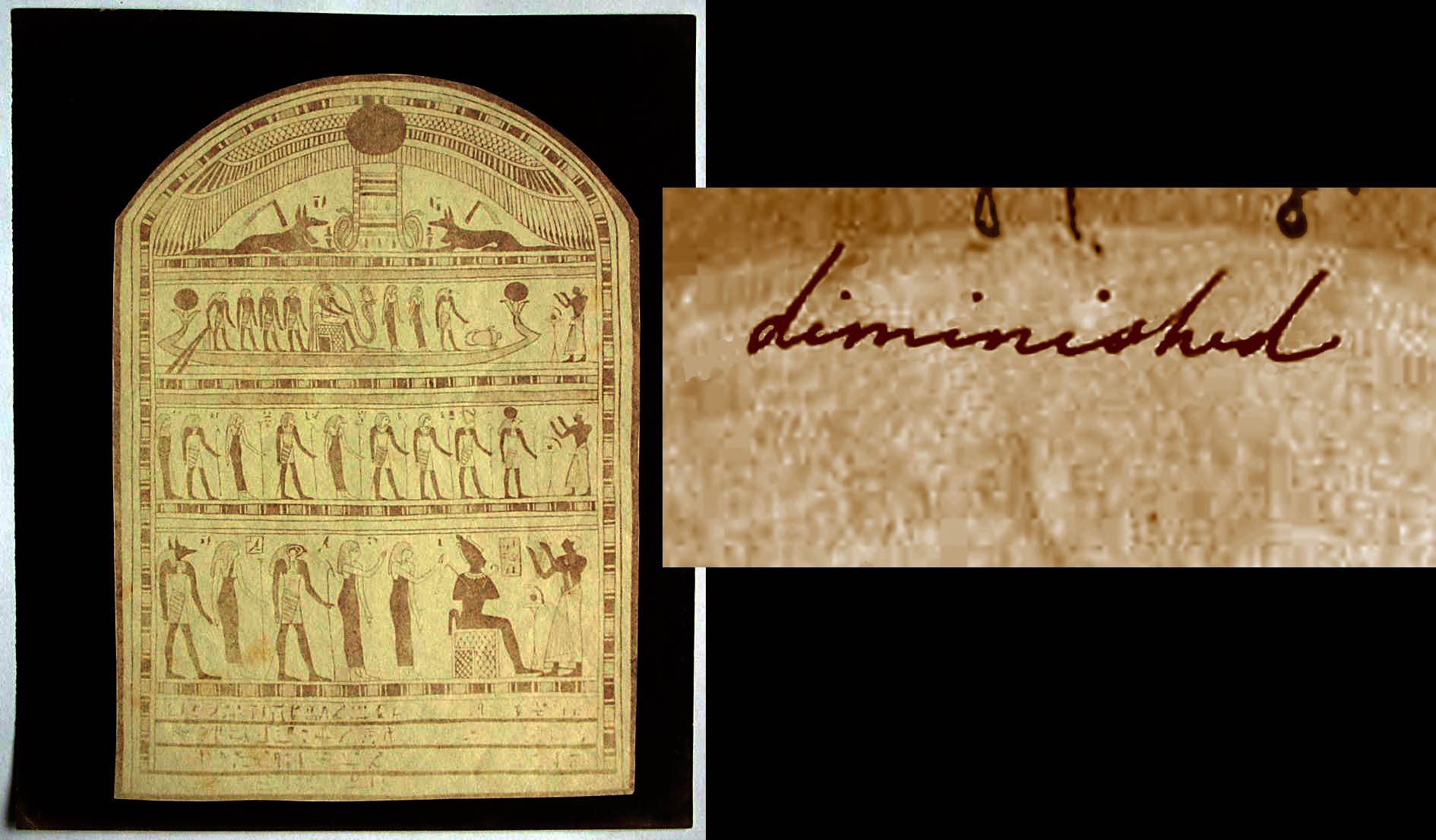 Sometimes the trimming is methodical and logical. In this copy of a lithograph of a wooden tablet discovered at Thebes in 1818 by the Earl of Belmore, Talbot demonstrated two of the virtues of his new art. The hieroglyphs were copied very exactly by photography in a way that would have been challenging to Western-trained artists. Equally importantly, Talbot reduced this huge lithograph down to about a quarter of its original area, making his photographic copy more suitable for inclusion in normal books and albums. The rounded top reflects the shape of the original tablet. Talbot’s inscription of ‘diminished’ on the verso of this presentation print was a proud boast of capabilities rather than a qualitative comment. 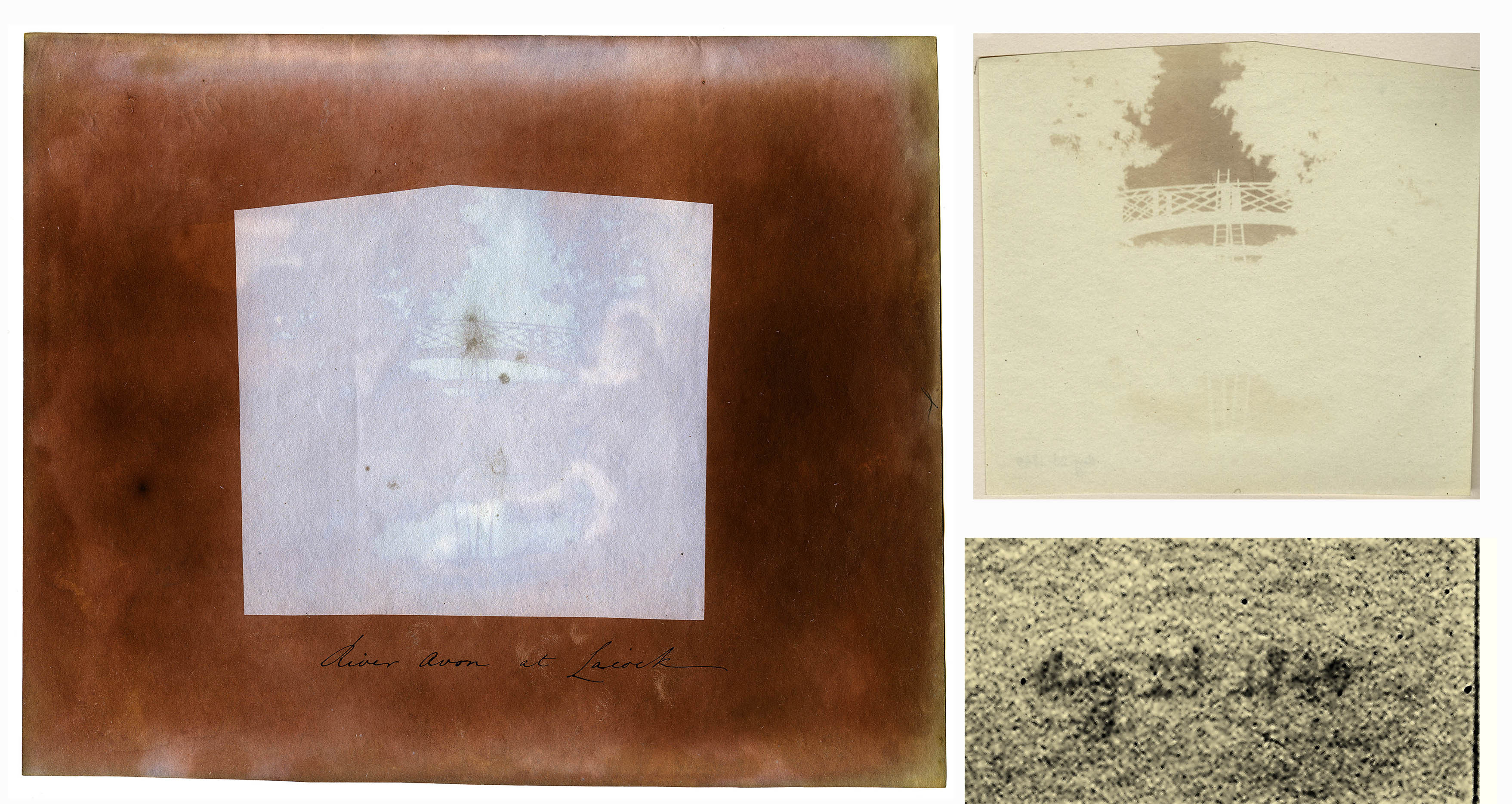 For purposes of research, and particularly for the Catalogue Raisonné, Talbot’s wandering shears are a blessing. His negatives started out life as ordinary sheets of plain paper. He roughly cut the paper to a size that would fit into his homemade cameras before sensitising. Once the negative was exposed, depending on whether he was using the photogenic drawing process or the calotype, he would fix it or develop and then fix it. Once dry, it usually was further trimmed to remove unnecessary or defective borders. These multiple stages of hand trimming resulted in a distinctive orthographic projection for each negative which can be exploited in matching up negatives and prints. This photogenic drawing negative of the China Bridge over the River Avon, on the eastern border of the grounds of Lacock Abbey, was made on 23 August 1840. Unlike some images, the subject of both the negative and the print in this case is identifiable as a bridge, and to the trained eye it is a specific bridge. However, even in cases where the negative is totally faded, its unique outline can be matched to the prints and both can contribute information to each other. The highlights of a print are composed of smaller clusters of silver, which are more vulnerable to outside influences and thus fade first. Even a ‘totally faded’ print will often retain dark enough borders to detect the outline of the negative. Here, the inscription on the negative supplies the date and Talbot’s inscription on the print, River Avon at Lacock, identifies the subject. Armed with these clues, additional resources can be brought to bear, such as information in Talbot’s notebooks or in his Correspondence. 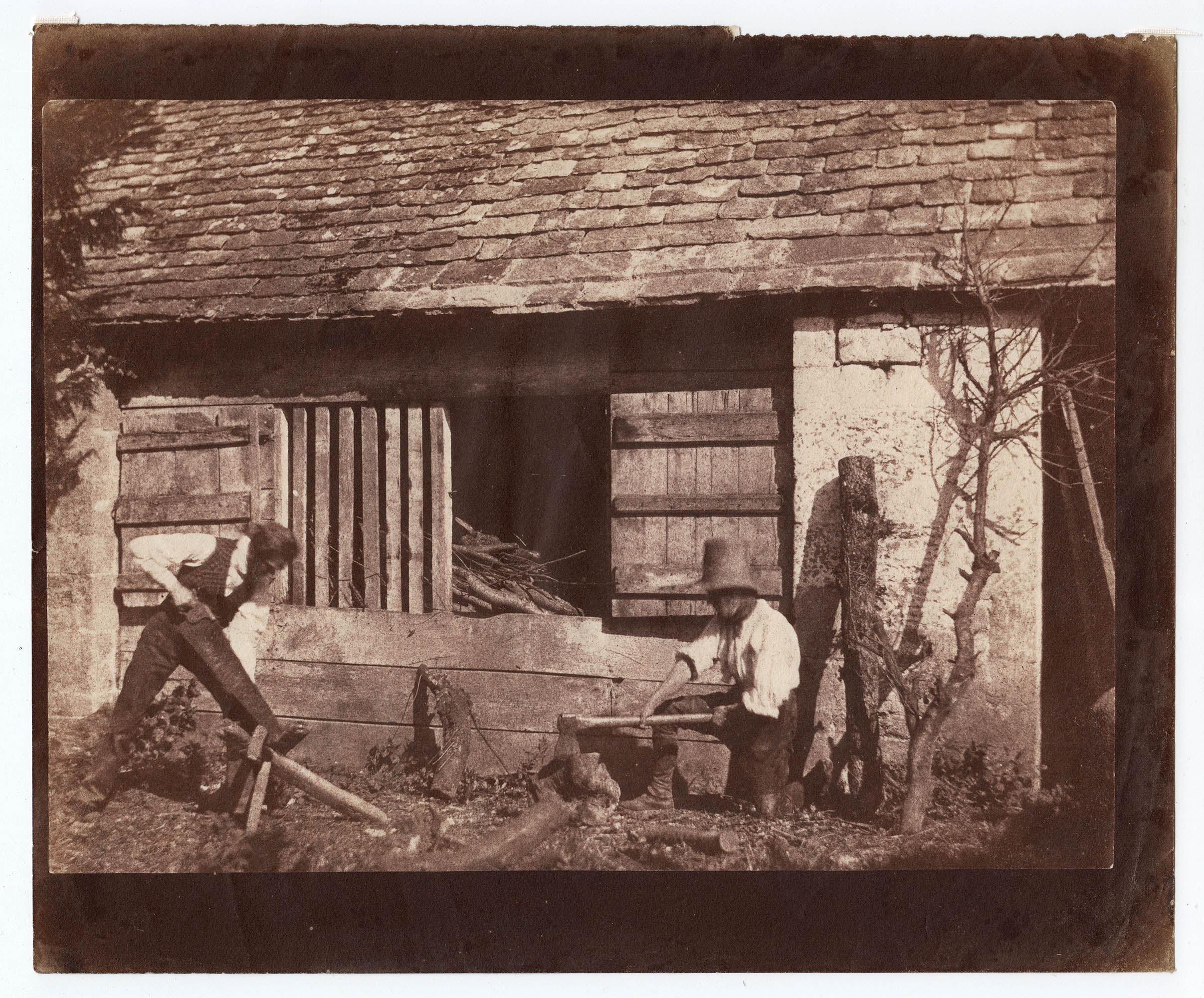 Finally, there are some cases where Talbot made a clear and understandable choice in his trimming. “The Woodcutters’ was probably made around 1842 or 1843 outside one of the sheds just north of Lacock Abbey. Nicolaas Henneman (1813-1898), Talbot’s loyal Dutch-born valet, and soon to be an independent photographer, is busy sawing on the left. The identity of the log-splitter on the right is less certain, but overall the photograph accurately re-creates a typical workaday scene on a country estate. Above is the normally seen cropping of this image – the waxed negative, which still survives, has been cut to this size. There are examples where a negative was cut down progressively, leaving a trail of ever-diminishing size prints all stemming from the same source. 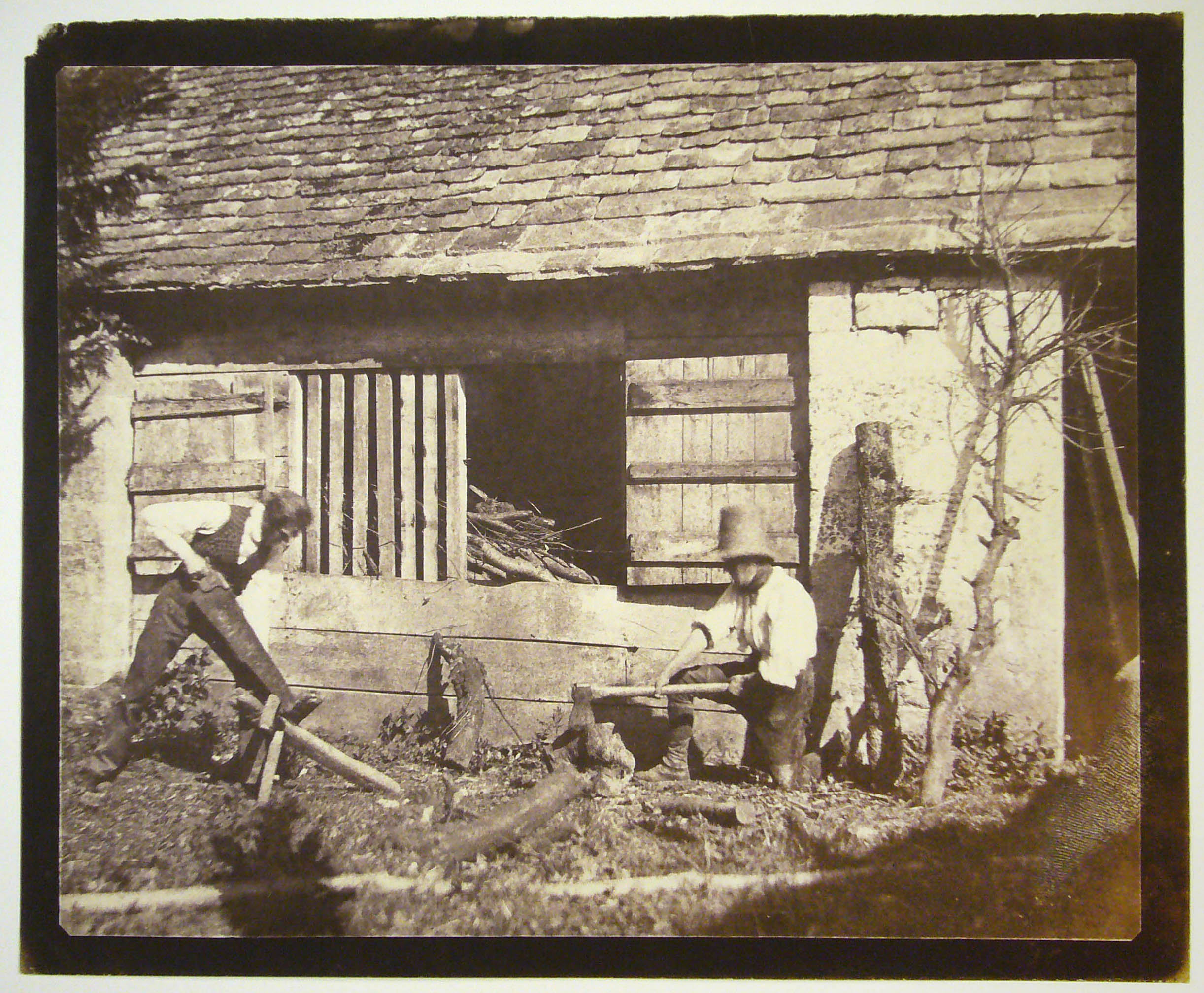 One print is known to have survived that shows a greater amount of the original negative. One could argue that the cropping was an aesthetic choice, for the tighter framing is arguably a better composition. In the Catalogue Raisonné, all the prints from one negative share the same Schaaf number as that of the negative, which allows associating all printing variations of a single unique image. But in this case, it seems likely that Talbot might have accepted the shadows in the foreground, but he would have been less happy about the chemical defect in the lower left, and almost certainly far more disturbed by his own accidental signature. 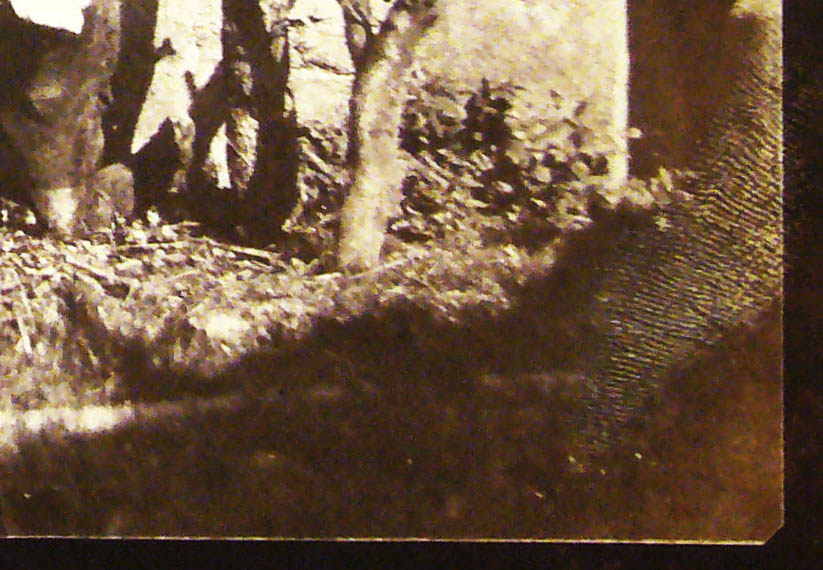 Talbot apparently considered keeping the full composition at first, for the corners of the paper negative were neatly clipped, a precaution against wear and tear when the negative was handled in printing. The loosened paper fibers that built up as the corners were damaged were recorded as white spots in the prints. But even if he accepted the shadows, far more intrusive is Talbot’s palm print. The oils left behind on the paper by contact with skin had a tendency to repel the water-based developing solution, leaving behind clear evidence of the maker. To be fair, at this stage we don’t actually know if that is Talbot’s hand-print or that of a collaborator such as Henneman, who often did the printing. It will take the forensic skills displayed on popular television programmes such as NCIS or CSI to ascertain this identity in the future.