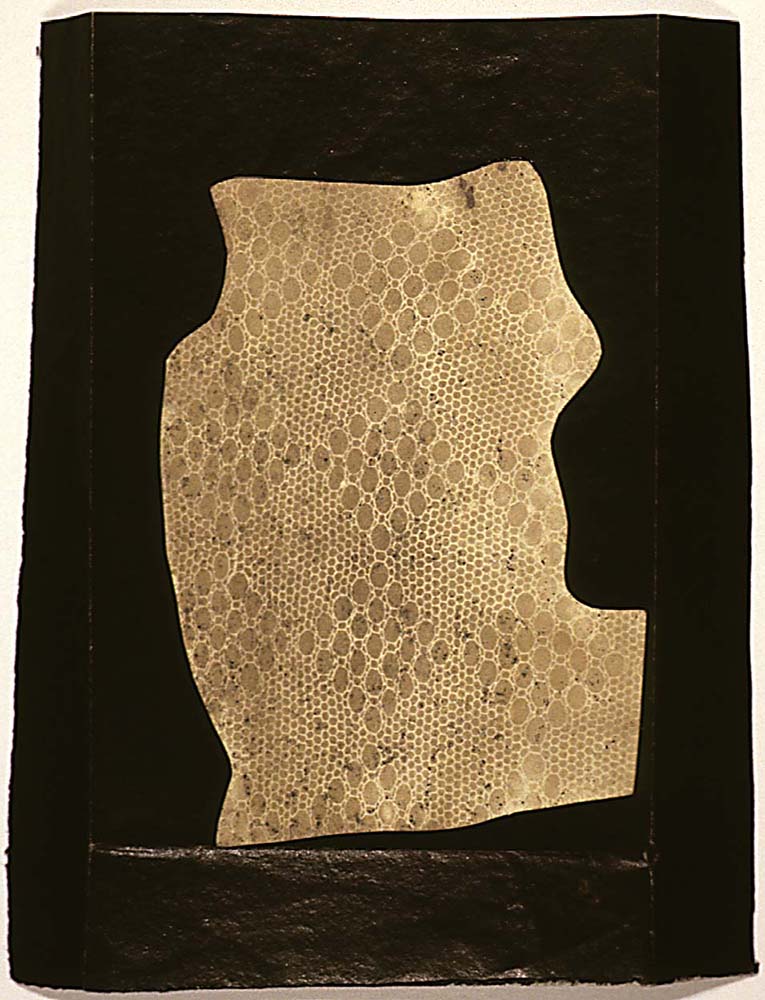 I was captivated by this photogenic drawing of a piece of lace the very first time that I saw it. Greatly detailed, alive and dancing, it is hard to believe that this is one of the very first photographs ever made by Talbot.  In fact, the photographic negative was cut out to this odd shape and mounted on a piece of hand-blackened paper.  It is a fold in the support paper that deflects the light, creating the appearance of a surface below the lace.  Because of this distinctive mounting, I believe that it is one of the examples Talbot displayed in the library of The Royal Institution in London on 25 January 1839.  It was a hasty response to Daguerre’s surprise announcement, and given the appalling weather that winter, all Talbot could do was show examples that he had made in years previous, mostly in 1835, which is the likely date for this image. Talbot conceived the idea of photography in 1833 and turned this dream into a reality by the spring of 1834. It was an invention, the realisation of a quest. By way of contrast, in the autumn of 1840, lurking in the various experiments of his ongoing research programme, Talbot found the seeds of what was to evolve into the calotype. That process was a happy discovery rather than the outcome of an inventive streak. Several hundreds of times faster in exposure, the calotype would have been a more competitive initial challenge to the Daguerreotype had Talbot invented it first. That notwithstanding, it has long been my feeling that if Talbot had invented the calotype first, we might well have been deprived of a fine photographer.  Perhaps the gods did have a plan.

Sometime around March 1835, four years before Sir John Herschel and others contributed the term photography, Talbot recorded his private thoughts in one of his series of research notebooks.  These are highly miscellaneous journals, flitting from thought to thought, from chemistry to poetry, but they are one of the best tools that we have to examine his creative mind. Talbot referred to his new invention as  “the Photogenic or Sciagraphic process” – more on the first term in a moment, but the reference to sciagraphy is telling.  That was the common theatre technique of depicting objects through their shadows.  What could be more descriptive of his early efforts?  The tones were reversed, light for dark, since it was the action of light that reduced the silver. Talbot’s first images were shadows (we would now call them negatives) of the objects that they represented, reflecting a sense of wonder about an extension of vision beyond the ordinary, a depiction that served to replace a physical object

Talbot also immediately understood how to turn these ‘shadows’ back into a positive image.  He continued, “if the paper is transparent, the first drawing may serve as an object, to produce a second drawing, in which the lights and shadows would be reversed.”  And there is negative-positive photography in a nutshell.  Above is probably one of the first, if not the first, prints that he actually made.  Even it is a surprise.  While travelling in Geneva in the autumn of 1834, he invented what he called photographic etching.  Coating a sheet of glass with an opaque varnish, he had an unidentified friend cut an image through  the varnish with a needle (for he himself was no sketch artist).  Talbot then printed this ‘negative’ onto his photogenic drawing paper, exactly as the cliché verre artists were to do in France several years later.

To make photogenic drawing paper, Talbot first coated a sheet of ordinary writing paper with a solution of table salt, then coated it again with silver nitrate.  The chemical reaction between these caused the precipitation of light sensitive particles of silver chloride, only to be immediately trapped within the fibrous structure of the paper.  To make the above image, Talbot would have placed the plant on the sheet of paper, pressed it down with a sheet of glass and then placed the package in sunlight.  Within minutes, the solar energy convert the silver chloride into clumps of metallic silver.  That conversion happened wherever the light could reach the chemistry, so in areas where the plant or lace blocked the light it remained paper white.  There was no subsequent development – the image formed fully  under the action of light; all that remained was to fix and wash it.  This example is particularly interesting; it was made from a very fresh specimen, for below the stem one can see the stain of the juices that were expressed by the pressure of the glass. In 1841, in a letter to his wife Constance, Talbot criticised Nicolaas Henneman for spoiling pictures this way. 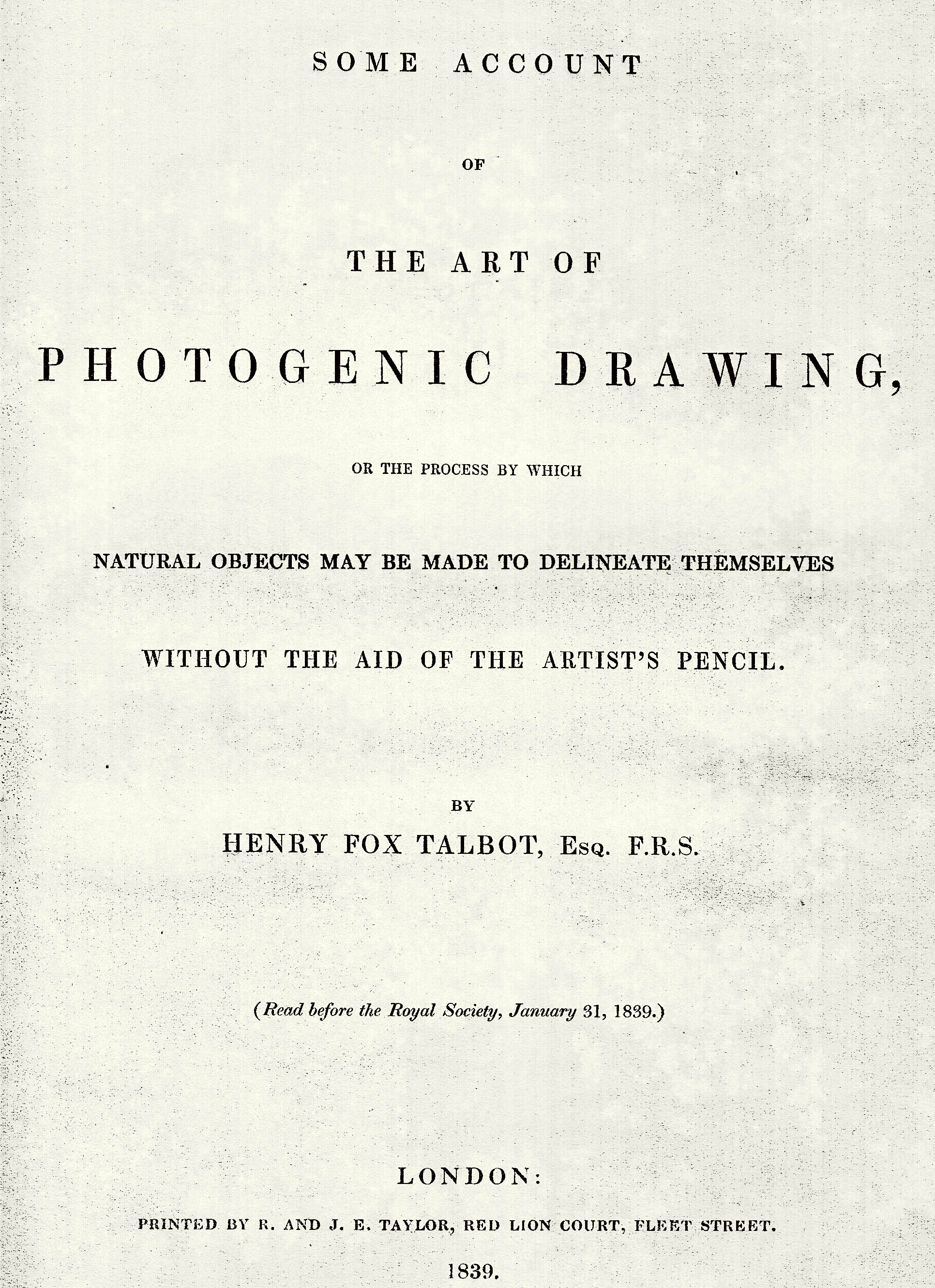 After his showing at The Royal Institution on 25 January, Talbot presented his first paper on photography to be read before the august members of The Royal Society on 31 January 1839.  His quickly-written paper shows how agile and imaginative Talbot’s mind was, for he laid out many practical and scientific applications for the new art.  A fortnight later he published the complete formula for his photogenic drawing, six months before Daguerre was to reveal his secrets.

However, there was great turmoil within The Royal Society at this time and an inexplicable failure to support Talbot’s efforts.  Frustrated that the Society would not publish his paper, he printed it privately in an edition of 250 copies, one of which is seen above. There is considerable confusion today about just what a photogenic drawing is and it is often conflated with the term photogram as a contact shadowprint.  Photogram is actually not a term contemporaneous with Talbot, but one that evolved  through several meanings shortly after his lifetime.  In Talbot’s definitions, a photogenic drawing is a print-out paper, that is, one where the image is ‘developed’ by solar energy, not chemically, and appears fully visible straight away.  It can be a negative made under a piece of lace, a negative made in a camera, or a print from one of these negatives.  Chemically and physically these are all the same.  A piece cut from a sheet of sensitised paper could be placed in the camera and exposed, creating an image within perhaps a 10-30 minute exposure.  After stabilising, this negative could then be sandwiched onto another piece of the very same sheet of paper and placed in the sun, yielding a print.  Or many prints.  Adding to this confusion is the persistent thought that camera images must be calotypes – and then some people call the prints from these calotypes as well.  Let us leave that to a subsequent posting.

This intimate view within the author’s library was taken on 26 November 1839, using a photogenic drawing negative, which in turn made this photogenic drawing print.  It is not a calotype!  But it is customary today to call such items salt prints or salted paper prints. For Talbot to attempt to make an interior scene on a dark autumnal day was to pose an extraordinary self-challenge.  The exposure time must have been an hour or perhaps more and one can see the details softened by the movement of the daylight filtering into the room from constantly changing angles.  Yet think how much this represents: Talbot’s world of learning, the fine objects of a country house, a contemplative environment, all rendered without the aid of an artist’s pencil. 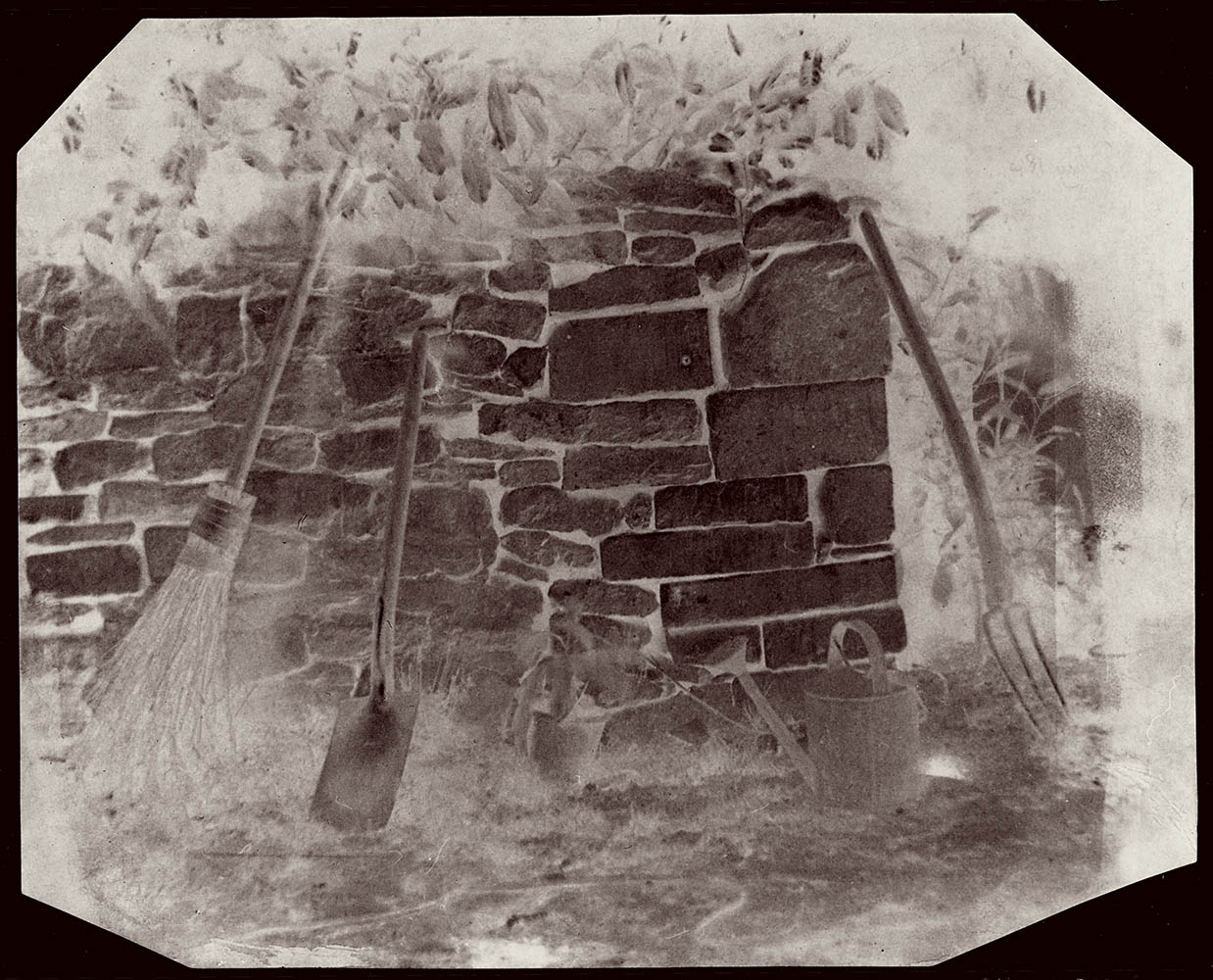 As spring came early in 1840, Talbot’s spirits were literally lifted by the light.  This photogenic drawing was made by him on 2 May 1840.  This ‘Wall in Melon Ground’, as he titled it, begins to show his fascination with how common objects modulated the light, the glint of a shovel blade affecting it quite differently than the tangled straws of the broom.  The detail is immense.  It also is not a calotype, but rather a photogenic drawing negative, made in a camera. 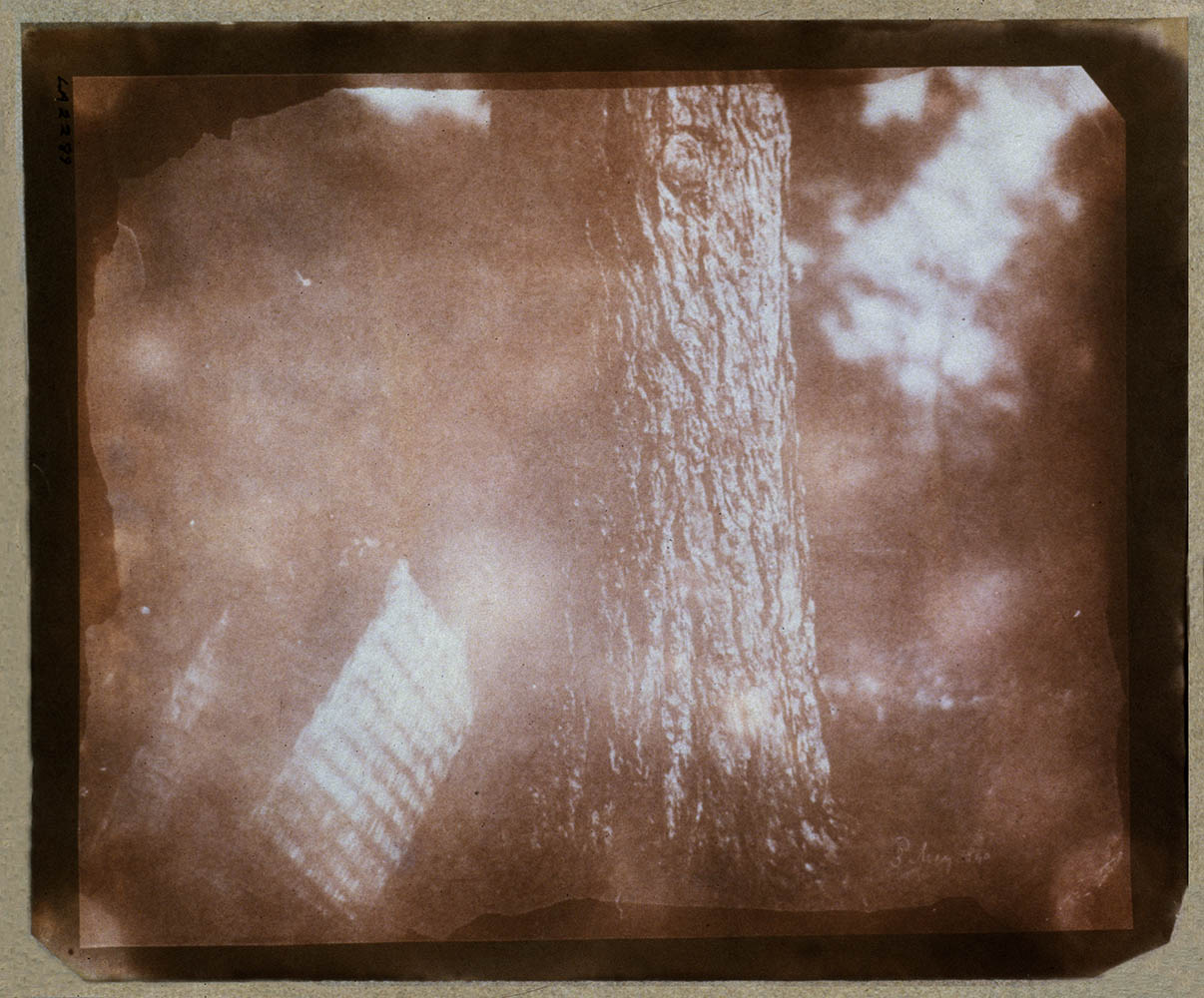 The next day, 3 May, Talbot composed this image of a basket leaning against a larch.  The print is somewhat degraded by time (it remains so beautiful that I have resisted the urge to reverse the aging process in Photoshop), but one can still see how Talbot, just a few years before hopeless as a draughtsman, either recognized a composition when he saw it, or had started to learn ho w to arrange objects to compose one.  I think one of the major reasons for this aesthetic advance was that Talbot  was the first artist to be trained by photography. Daguerre was already an artist when he invented his process and had only to adapt his previous training. Talbot had no training save for what his sheets of paper could tell him.  Withdrawn from the camera with the image fully present, he could immediately compare the original scene with what Nature had drawn for him.  He could see how the colourful three-dimensional world had been translated into a monochromatic rendering on a flat sheet of paper.  His later calotype was a developed-out process. No image was visible when the sheet was withdrawn from the camera, only becoming apparent after later development in the darkroom.  Had Talbot’s experience of seeing nature and seeing the subsequent photograph started off with this separation, both in time and place, would his eye have advanced as it did?