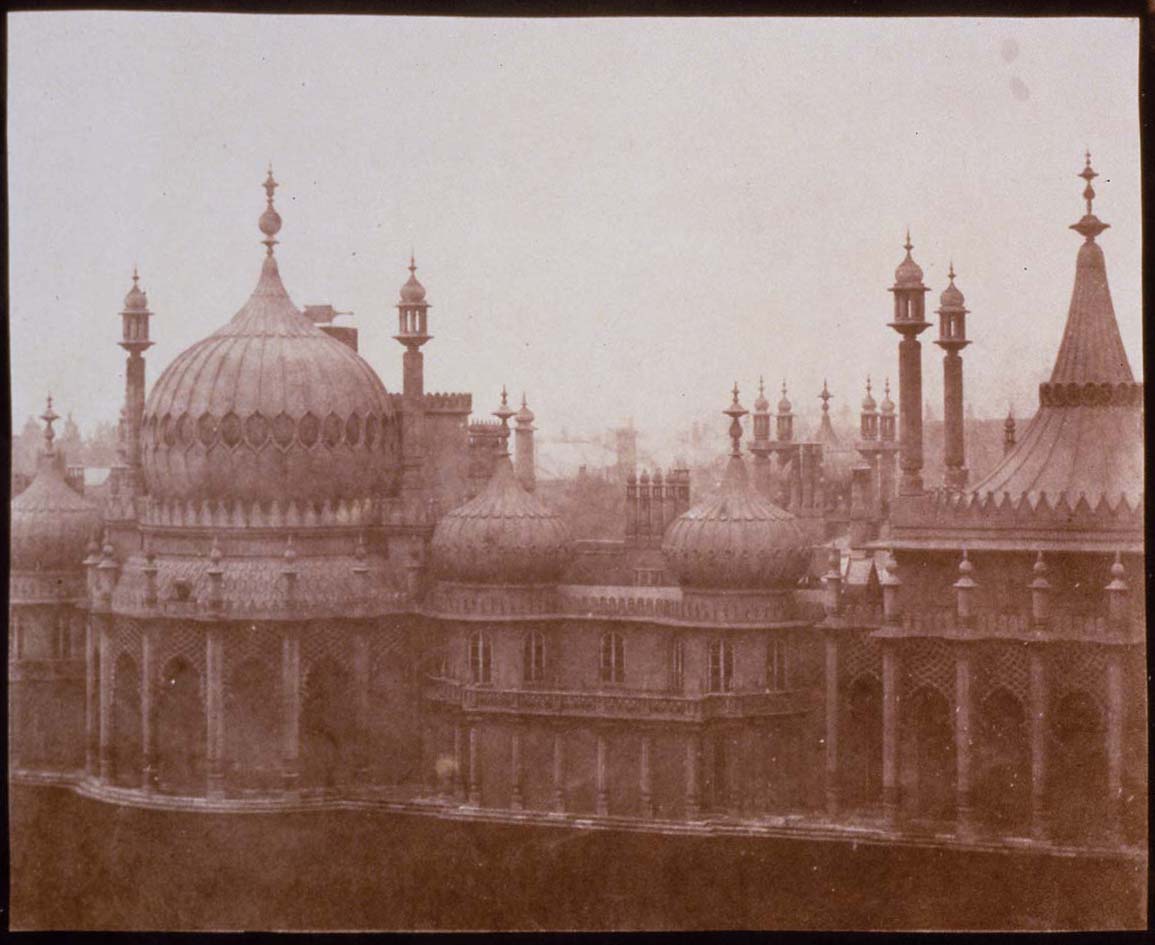 Taken in the cool mist of winter, Talbot’s view of Brighton’s Royal Pavilion provides a fleeting visual escape from the present summer heat. The seaside has always been associated with summer days, defying the pressures of everyday life, days tempered by the cooling effect of the ocean. About 150 miles (240 km) southeast of Lacock on the English Channel, Brighton was a favoured destination for the Talbot family at all times of the year. The fantasy-like Pavilion that they knew was John Nash’s enlargement of the original marine pier, a modification completed by 1823. In Talbot’s view, the Salon is in the centre, the Banqueting Room on the right, and the Music Room is under the left dome (the weather vane just poking out behind it was gone by the 1850s). Its interior was as visually spectacular as its façade.

Talbot’s half-sister Caroline wrote him from Brighton in November 1840, inviting him to join her: “I am sure the change of air will do you good…it will give you new ideas upon Photographs.” Talbot took up her invitation, but while his newly-discovered and as yet unpublished calotype process would have permitted this low light exposure, there is no record that he took any photographs at the time. Queen Victoria did not particularly fancy Brighton, but one clue to dating this image comes from  a variant negative, presumably taken at the same time as this one.  It shows an empty sentry box, a clear reference to the occasional Royal presence. In1842 Prince Albert had his daguerreotype portrait taken there by William Constable.  The Queen’s last visit was made in February 1845.

Talbot placed his camera in the bow window one storey above ground in Mrs Elizabeth Jackson’s house at 11 Pavilion Parade (it is still there).  In spite of challenging weather, Talbot kept trying, perhaps with the thought of securing a view for the next part of The Pencil of Nature. This is one of a dozen negatives of the Pavilion; one shows the sentry box, certain evidence of Queen Victoria’s occasional visits. The only positively dated negatives Talbot made of Brighton are those of its St Peter’s Church, two are inscribed February 1846 and one is inscribed 3 February 1846. Further confirmation of the dating comes from Nicolaas Henneman, who brought some additional equipment on 9 February and two days later paid for the “hire of room in Pavilion Street.” All in all, this seems like the most reasonable dating of this entrancing image.

The Queen stopped visiting Brighton shortly before this and six months after Talbot took this photograph she put the complex up for sale. One wonders if sister Caroline, a Lady of the Bedchamber to Queen Victoria, suggested that her brother preserve its visage. The Queen, anticipating its demolition, stripped the interior of its finery and the Town of Brighton purchased the shell in 1850. Later in the century, responding to the Town’s sustained love of the complex, the Queen returned many of the interior fittings. Defying fires and storms since, the Pavilion continues to provide a visual treat to seaside visitors.