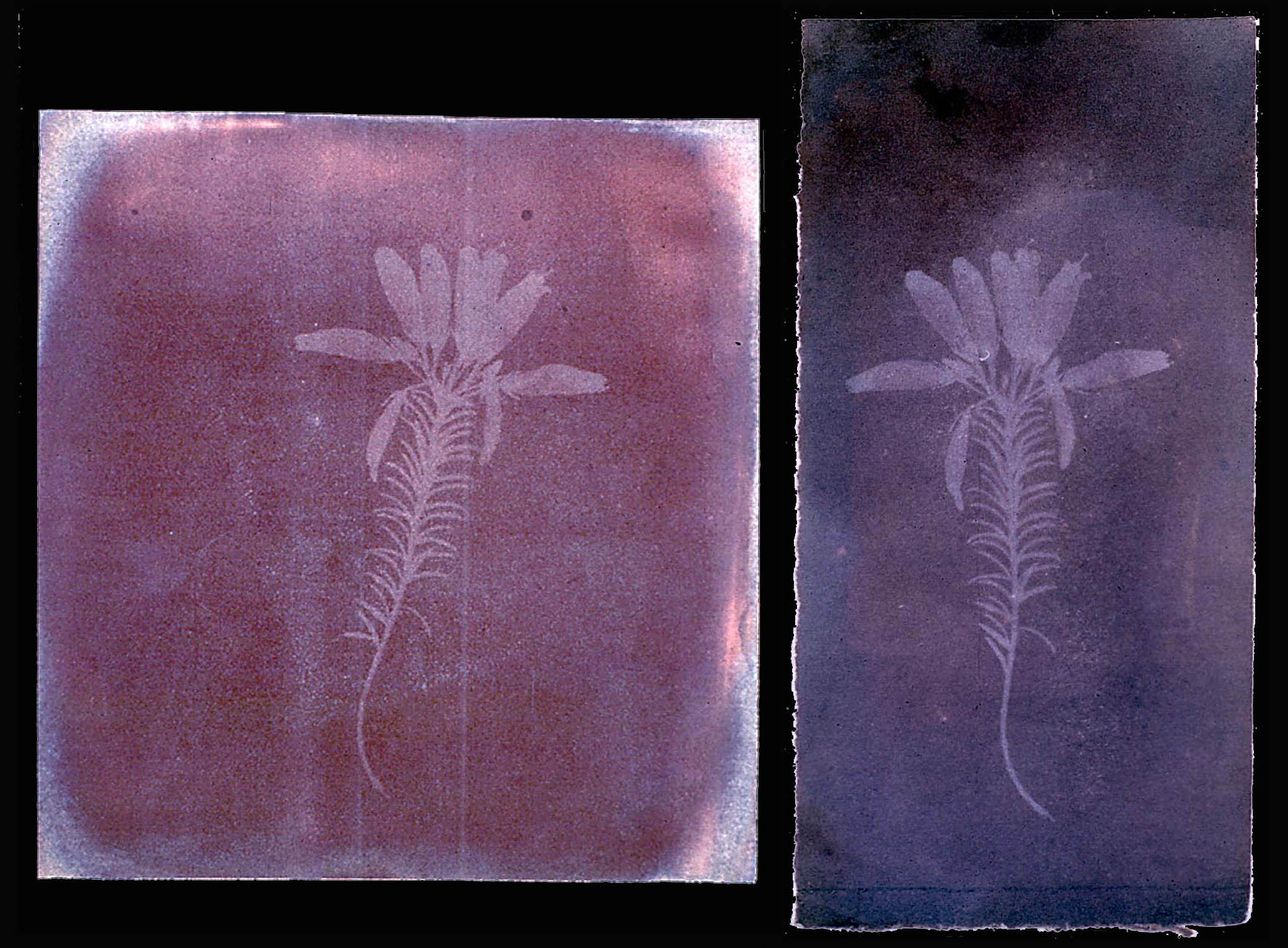 I cannot help but be reminded of Anna Atkins’s beautiful cyanotypes of algae when seeing this brace of negatives. Echoing her images, this botanical specimen is floating in a dreamy space, seemingly detached from gravity, freed from its surroundings. However, the plant is a terrestrial one, representative of the more than 600 species of Erica indigenous to the western Cape of Good Hope. Talbot’s friend Sir John Herschel returned from the Cape in the summer of 1838, just in time to participate in the introduction of photography to the public in 1839. When Herschel departed for the Cape in 1833, Talbot said “I almost envy you your intended residence in South Africa … a most favoured country with respect to its vegetable productions.” As a fellow botanist, Herschel was more than happy to meet Talbot’s request to send back specimens (in the gloriously free days before agricultural border controls) and this Erica most likely traces back to one of his shipments.

The left hand photogenic drawing negative was in fact a present from Talbot to Herschel: “I send you a flower of heath,” he wrote, inscribing it in ink on the verso: “H.F.T. March 1839 Erica Mutabilis.” The right hand one, clearly from the same specimen and presumably made the same day, perhaps was retained by Talbot, perhaps given by him to someone else. Acting in its role as a ‘negative’, a fresh and delicate plant like this would not survive for long pressed for some minutes under glass in bright sunlight.  These two images had to have been made within a short time of each other, but the missing leaf at the very bottom betrays the slightly younger age of the right hand one. Erica Mutabilis, the mutable heath, has a tendency to overproduce, so pinching off one of its crimson flowers was good horticultural practice in addition to being a fine source of imagery. It normally flowers in the early autumn, so this specimen probably lived in Talbot’s hothouse. 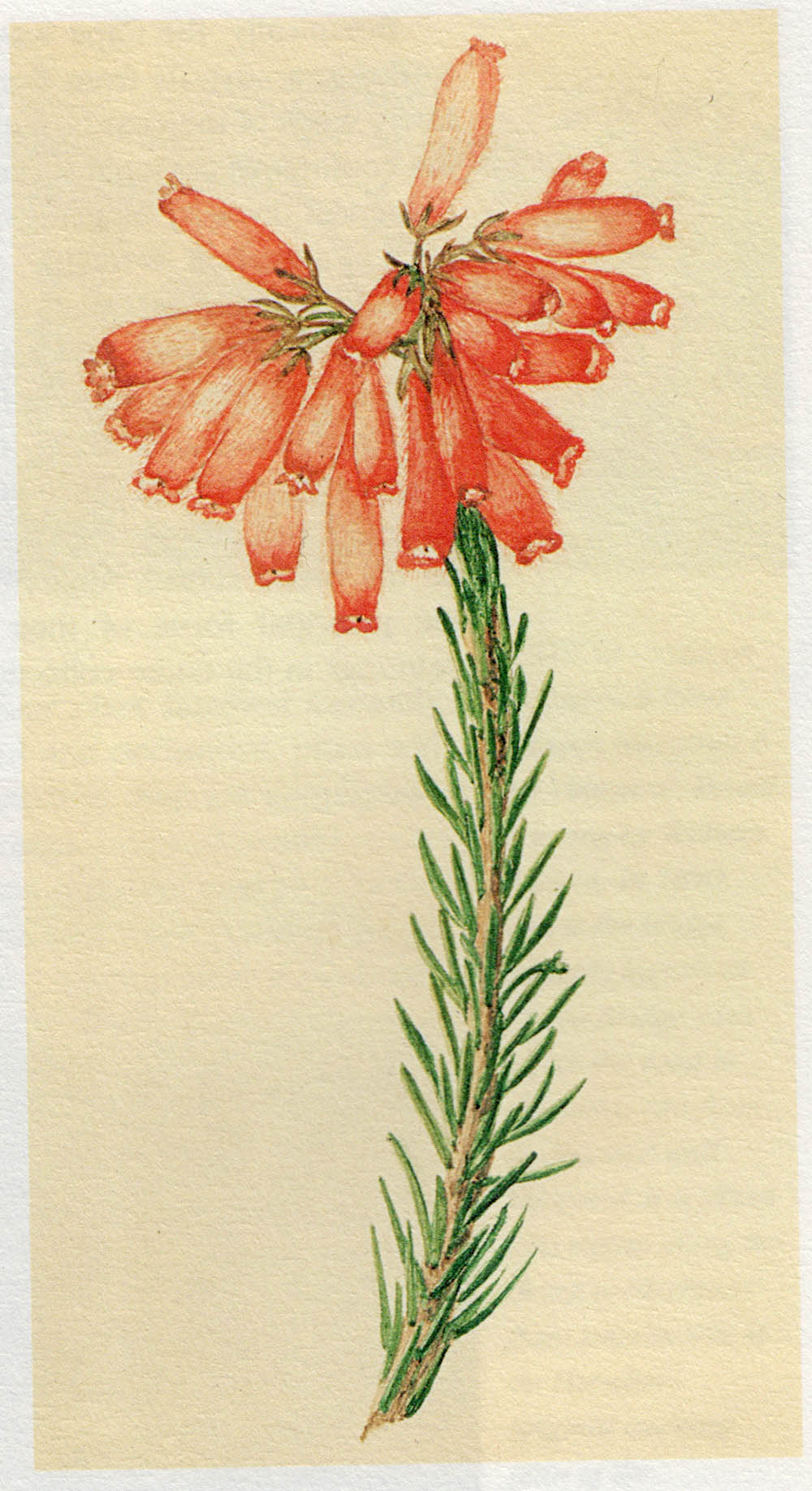 Within three weeks of arriving at the Cape, Herschel executed a camera lucida drawing of a strikingly similar specimen, Erica cerinthoides (the scarlet heath), the first of an extended series of such drawings he accomplished whilst there. Each was expertly coloured by his wife Maggie. Indeed, it was Herschel’s mastery of the camera lucida – the very instrument that frustrated Talbot into inventing photography – that later tempered his enthusiasm for taking photographs.

When Talbot sent his photographic “flower of heath,” he emphasized that it was “not fixed,” but Herschel immediately reassured him that “the very pretty specimen of the heath … shall be taken better care of than its predecessor.” The distracting fold in the paper was likely done by Talbot himself, for no better reason than convenience in posting, a seemingly thoughtless habit that frustrated his family. Otherwise admiring the “splendid collection” of his latest photographs, Lady Caroline Augusta Edgcumbe chided her brother that “it is a great pity you folded them as they would have traveled perfectly well between two pieces of pasteboard.” A year later his wife Constance was still complaining: “why did you fold your picture? You observe the line has copied itself.”