Sometimes what you are seeking is right under you nose (or in this case, long forgotten on one of my bookshelves).  For those new to this blog, you might first want to scroll down to the posting for 19 June.  It outlines the key points of a lecture that I gave recently about a controversial set of photographs once attributed to Talbot that were actually done by the previously unknown amateur photographer, Sarah Anne Bright.

I had an email yesterday from Adrian Andrews, an authority on Isambard Kingdom Brunel and the Clifton Suspension Bridge. In the course of his research he spotted a vital clue in the catalogue from the influential 1972 exhibition, ‘From today painting is dead.’   It was an illustration of an instruction that immediately confirmed the significance of the ‘W’ on the Sarah Anne Bright photographs. 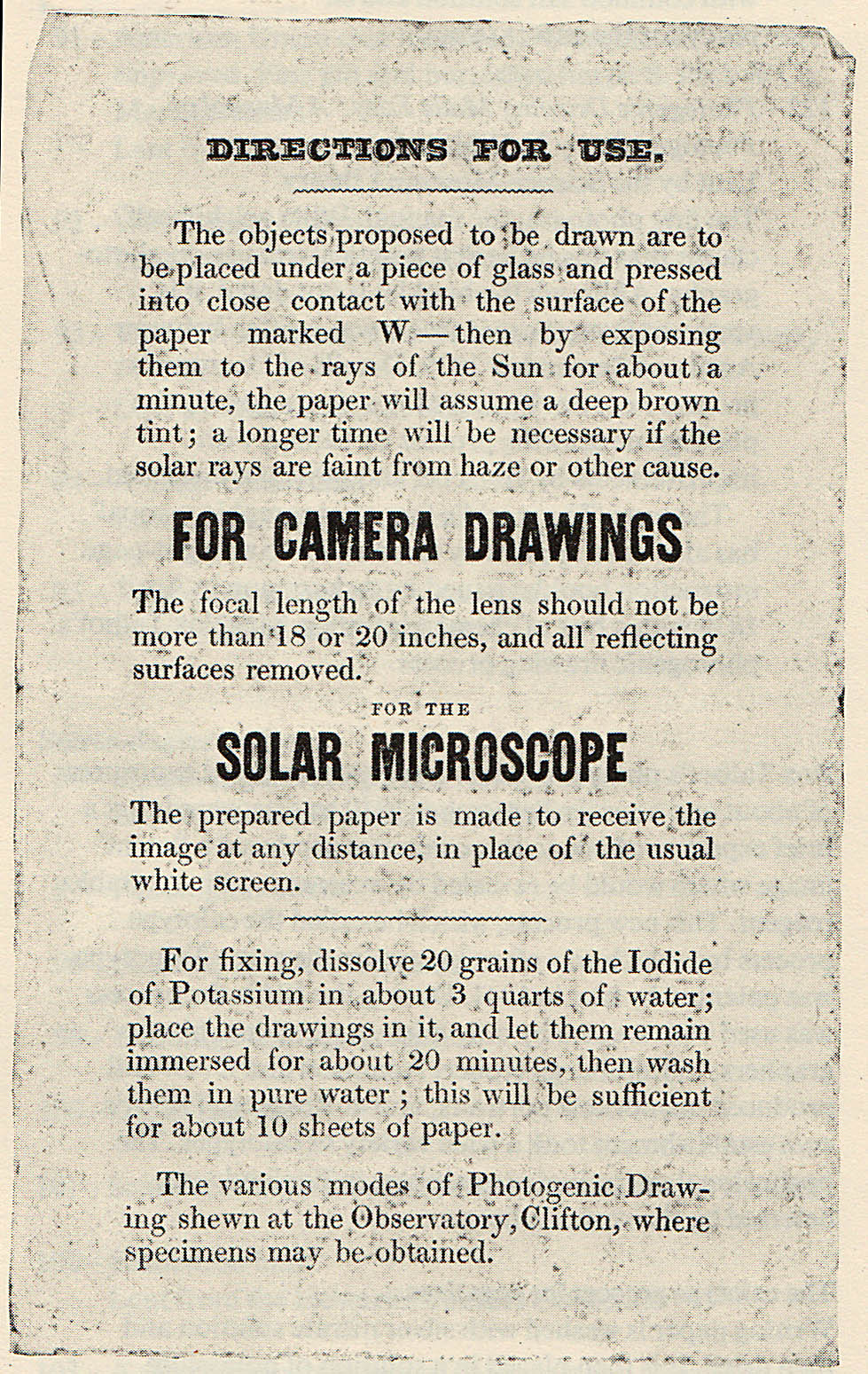 This was clearly issued by William West to accompany the pre-sensitized paper that he sold.  The use of the ‘W’ to mark the sensitive side of the paper was surely a self-expression rather than a coincidence.  His first use was for contact negatives – the kind that Sarah Anne made – but he also included hints for use in a camera and followed Talbot’s early practice of employing the intense rays of the solar microscope. 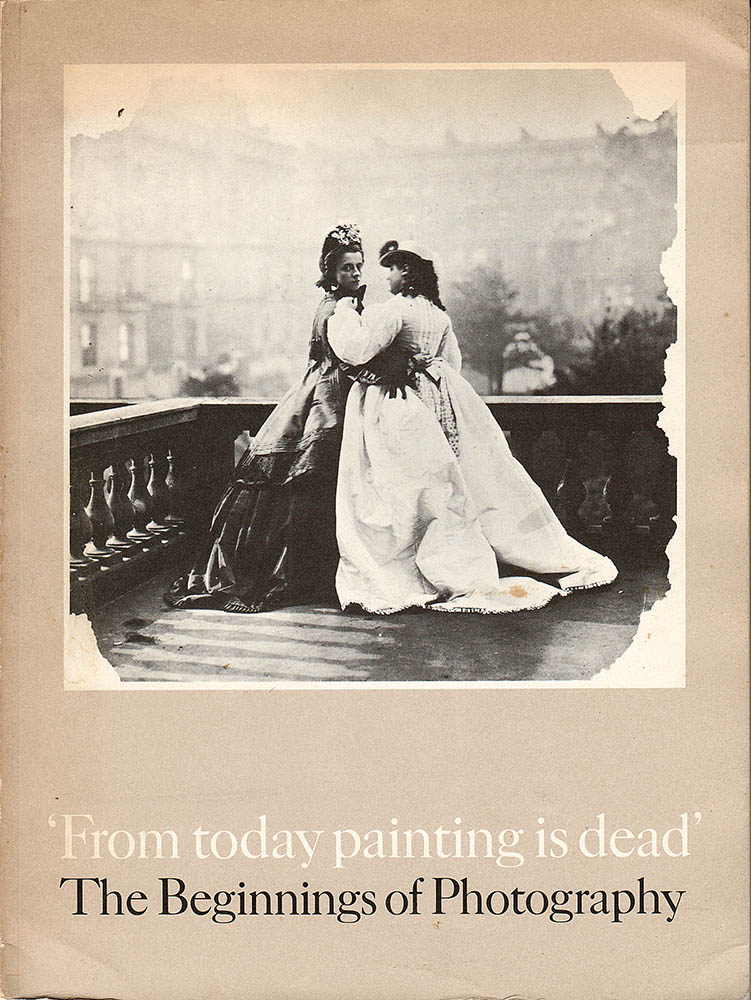 Sadly, I never got to see this exhibition, for it must have been an extraordinary one.  Held at the Victoria & Albert Museum under the title ‘From today painting is dead’; The Beginnings of Photography, it included an astonishing 914 exhibits covering the 19th century.  The chief curator and author of the catalogue was Dr David Thomas, the curator of photography for the Science Museum in London.  He drew not only on the Science Museum and Victoria & Albert collections, but also that of the Royal Photographic Society, the Kodak Museum, the Bodleian Library and numerous others. I suppose it must have been years since I last looked at the catalogue, much to my embarrassment, but I can recommend tracking down a second-hand copy if it is not already on your shelves.  With more advanced conservation concerns and the increased costs of loans and displays (not to mention what I think are lamentable changes in museum exhibition practices) it is difficult to imagine that we’ll ever see another exhibition so comprehensive in its scope.

Curiously and frustratingly, while the documentation in the catalogue is unusually complete, the illustration of West’s broadside is not credited.  Perhaps Dr Thomas drew on the Science Museum collection and the original is now deposited in the National Media Museum in Bradford, or perhaps it came from the John Johnson Collection of Printed Ephemera at the Bodleian and will emerge as the digitization process advances. While the broadside certainly dates from the seminal year of 1839, it is difficult to pin down its exact date.  West had adopted one of Talbot’s suggested fixers, potassium iodide, which would generally have given a yellow stain to the paper.  Sarah Anne Bright’s images are a more neutral brown, suggestive of no fixing or of the water fixing that West (along with Sir John Herschel) had hopes for, and her subjects lend themselves to a summer rather than spring dating.  As far as I know presently, West published only one technical description of his process: 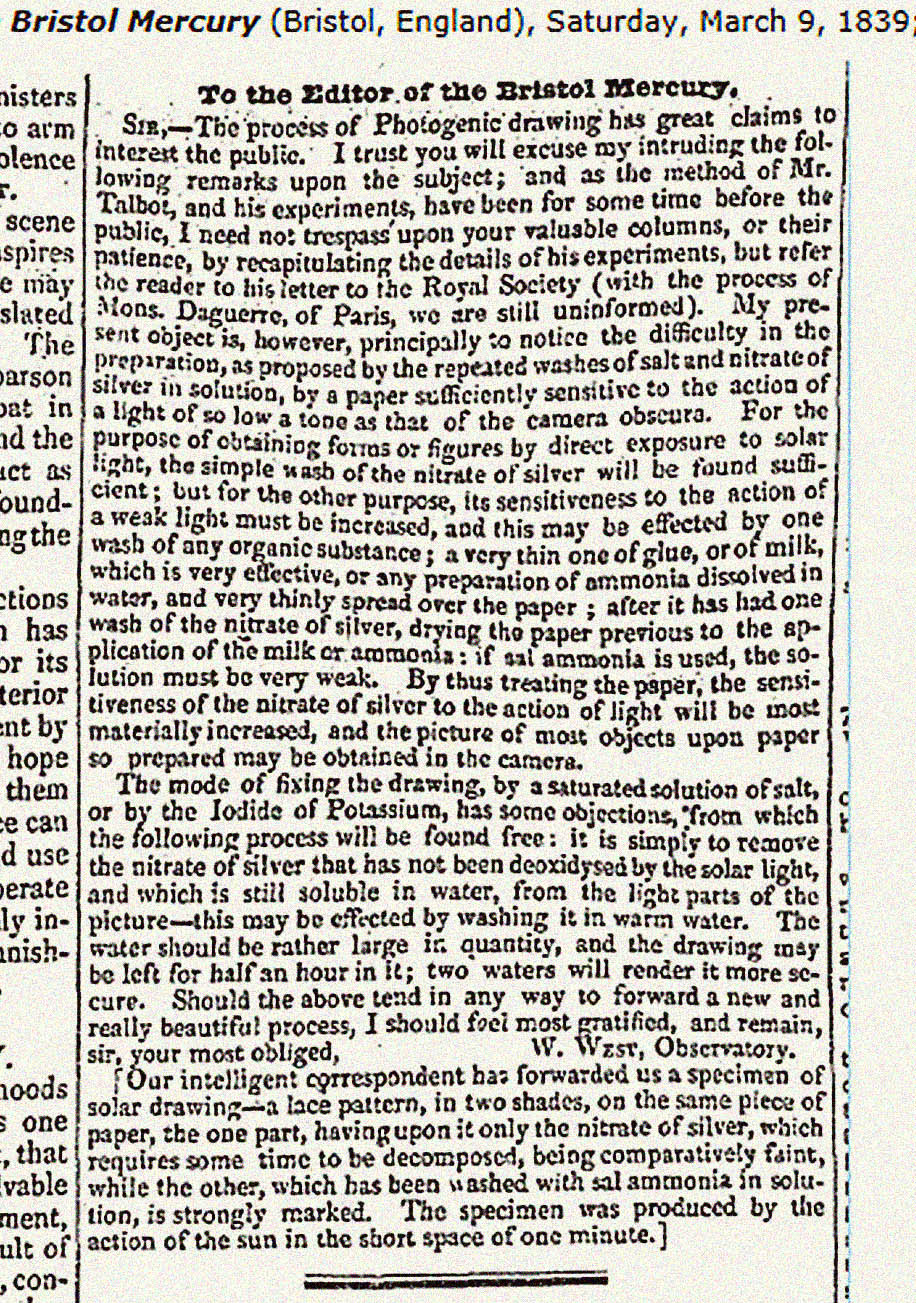 At this point in March 1839, West was obviously not very keen on iodide fixing.  Was his instruction sheet printed earlier?  Or later, after he had devised improvements in using this method?  Where is the original?  And did West publish anything else to accompany his photogenic drawing paper and his exhibitions and sales of his own photographs?

• Questions or Comments? Please contact Prof Schaaf directly at larry.schaaf@bodleian.ox.ac.uk  • David Thomas, ‘From today painting is dead’; The Beginnings of Photography (London: The Arts Council of Great Britain, 1972); the exhibition was at the Victoria & Albert Museum from 16 March – 14 May 1972; the broadside is reproduced on p. 28.  • If you want to learn more about The Damned Leaf, Lincoln University has kindly put a video of my lecture,  “The Damned Leaf: Musings on History, Hysteria & Historiography” online.