Yesterday, the 17th of September in 1877, William Henry Fox Talbot passed away peacefully at Lacock Abbey. Born in 1800, he had profitably surpassed his threescore years and ten, remaining intellectually active to the very end. The obituaries and tributes to him were various, those coming from the photographic community being surprisingly sparse, balanced by generally fuller acknowledgements from other fields. They might make for an interesting future blog. 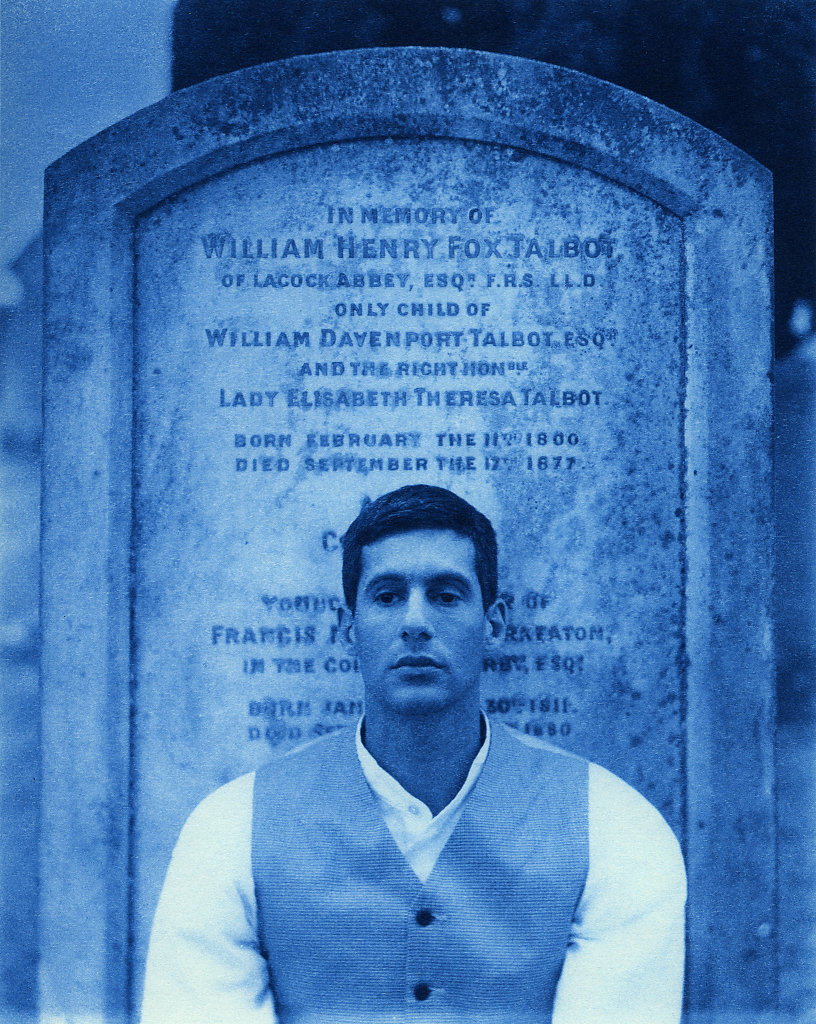 During photographer John Dugdale’s first visit to Lacock Abbey in 1997, he “felt as if I were on sacred ground. At the end of a long day we found the Talbot’s family burial plot. When we took my self-portrait at his gravesite in the gloaming, I was totally overwhelmed.” He originally chose to print Life’s Evening Hour in Talbot’s friend Sir John Herschel’s process of cyanotype.

If one recalls only a single Talbot photograph from a long ago art history class, chances are it is The Open Door. Describing this beautiful photograph in his pioneering publication, The Pencil of Nature, Talbot explained that “we have sufficient authority in the Dutch school of art, for taking as subjects of representation scenes of daily and familiar occurrence. A painter’s eye will often be arrested where ordinary people see nothing remarkable. A casual gleam of sunshine, or a shadow thrown across his path, a time-withered oak, or a moss-covered stone may awaken a train of thoughts and feelings, and picturesque imaginings.” 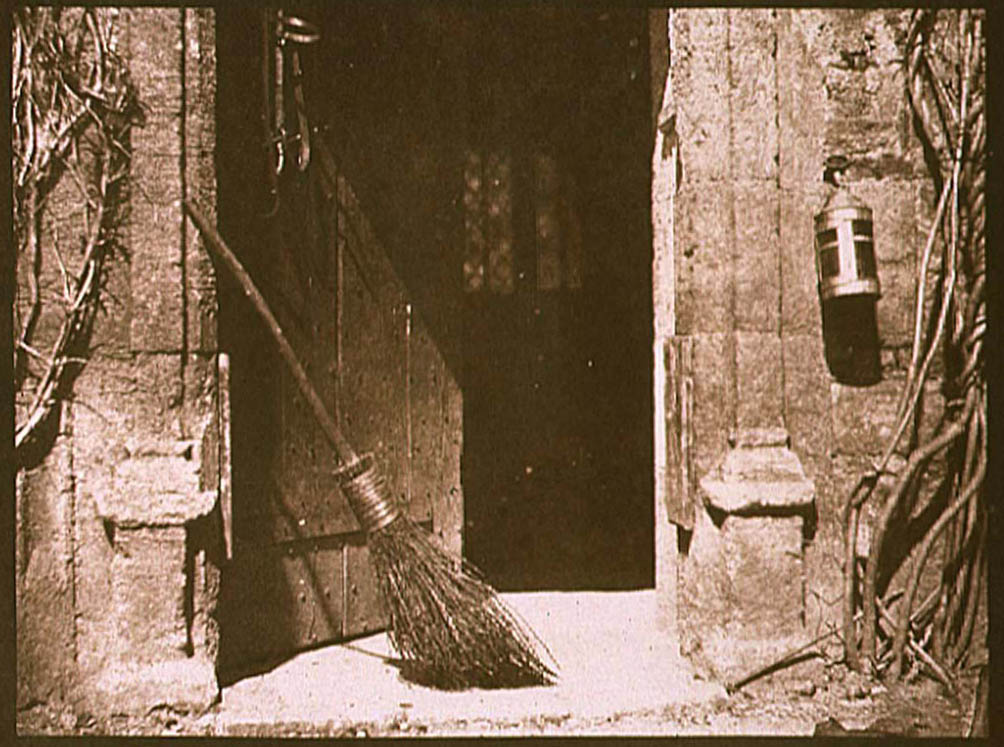 It is not surprising that such a sophisticated image was the result of a long period of reflection and refinement. What is surprising, however, indeed very rare in the annals of art is that we have a good visual history of the image’s evolution. The earliest visual trace we have of the idea is from 21 January 1841, perhaps a day when Talbot noticed a commonplace scene in the North courtyard of Lacock Abbey. Near the East end of the work buildings was a tack room, ready to furnish the carriages pulling out of the courtyard 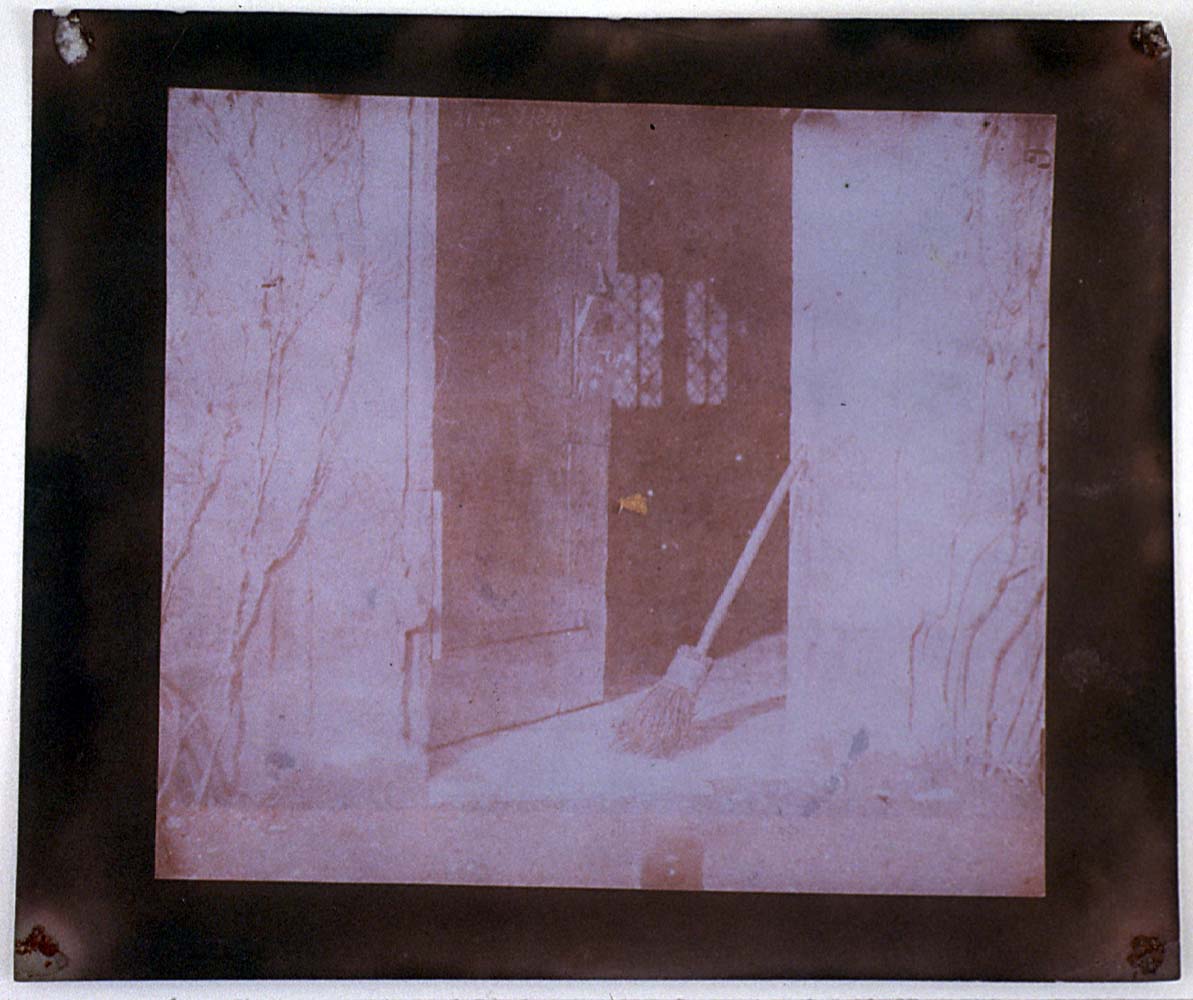 Talbot had discovered the calotype negative process less than four months before this, the greater sensitivity of which enabled him to employ the weak January light to sharply define a complex scene. His mother, Lady Elisabeth Feilding, actively interested in her son’s pursuits, was prompted to give this image the poetic title of The Soliloquy of the Broom. The besom is the central character in this play, young and fresh and hardly mindful of the audience. Its diagonal placement acts as a barrier, but its shadow and the light that created it invite our eye into the room. Doorways were symbolic of the boundary between life and death, but being ajar, the door offers hope. Countering that, the sinewy vines and the latticed window create a sinister air. The major elements of the final image are all here, but they have yet to work in harmony. It seems almost certain that Talbot must have returned to this scene from time to time, creating negatives that we have yet to discover, but the next tangible evidence is a pair of attempts made on 13 February 1843.

Having swept the steps countless times since Talbot started down this visual path, the broom has worn down to a stubble.  We sense that Talbot is reaching for something here, but it has yet to achieve clarity in his mind.  There is an interesting dimensionality to the window, but the afternoon sun pushes the shadow away from where it should be. We next see this image idea in a much strengthened composition, employing a small but fresher broom, on 1 March 1843. 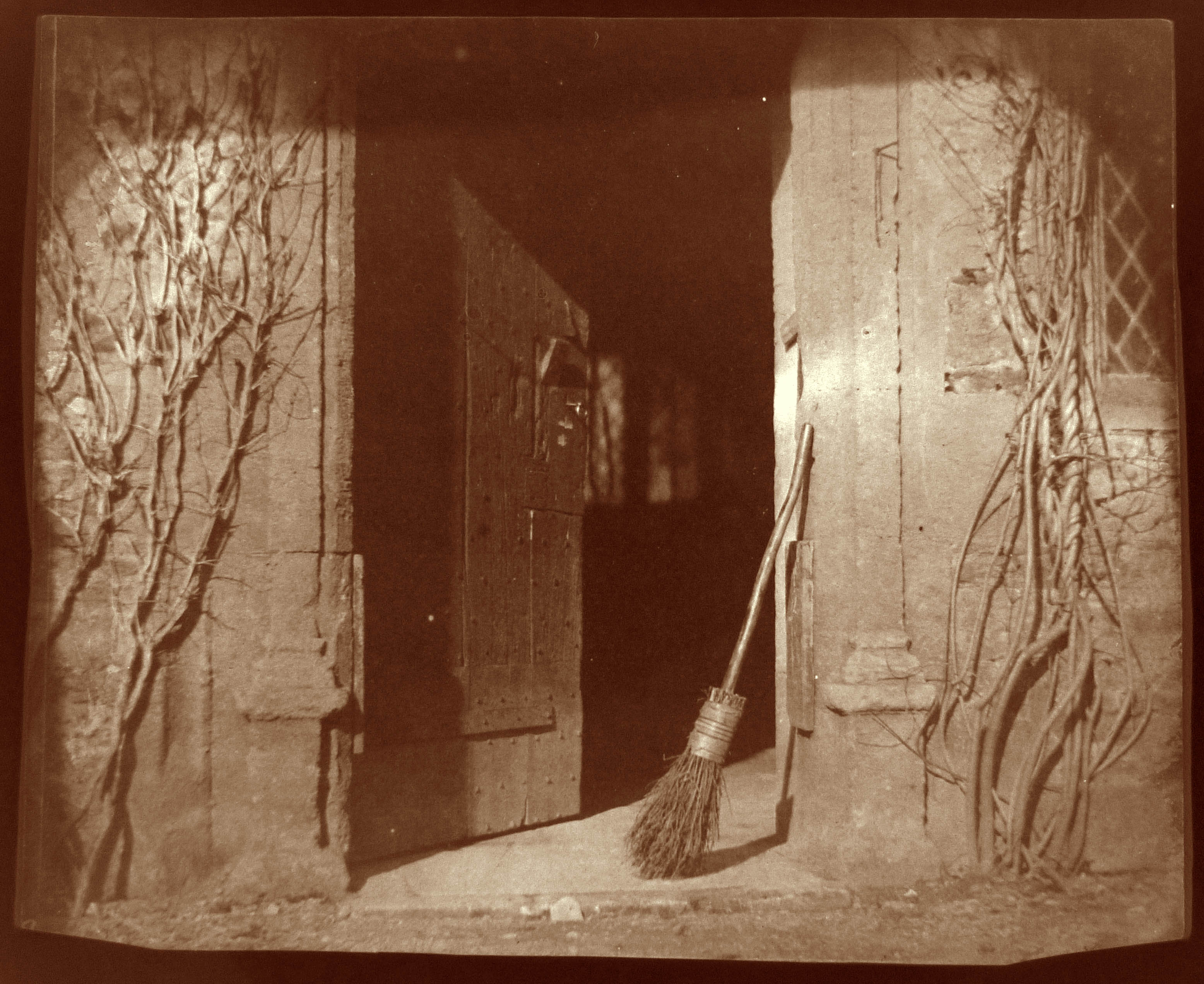 Which brings us to a word from our sponsor, the Catalogue Raisonné. The databases that underlie this project permit the matching of data on a scale that far outstrips human memory. 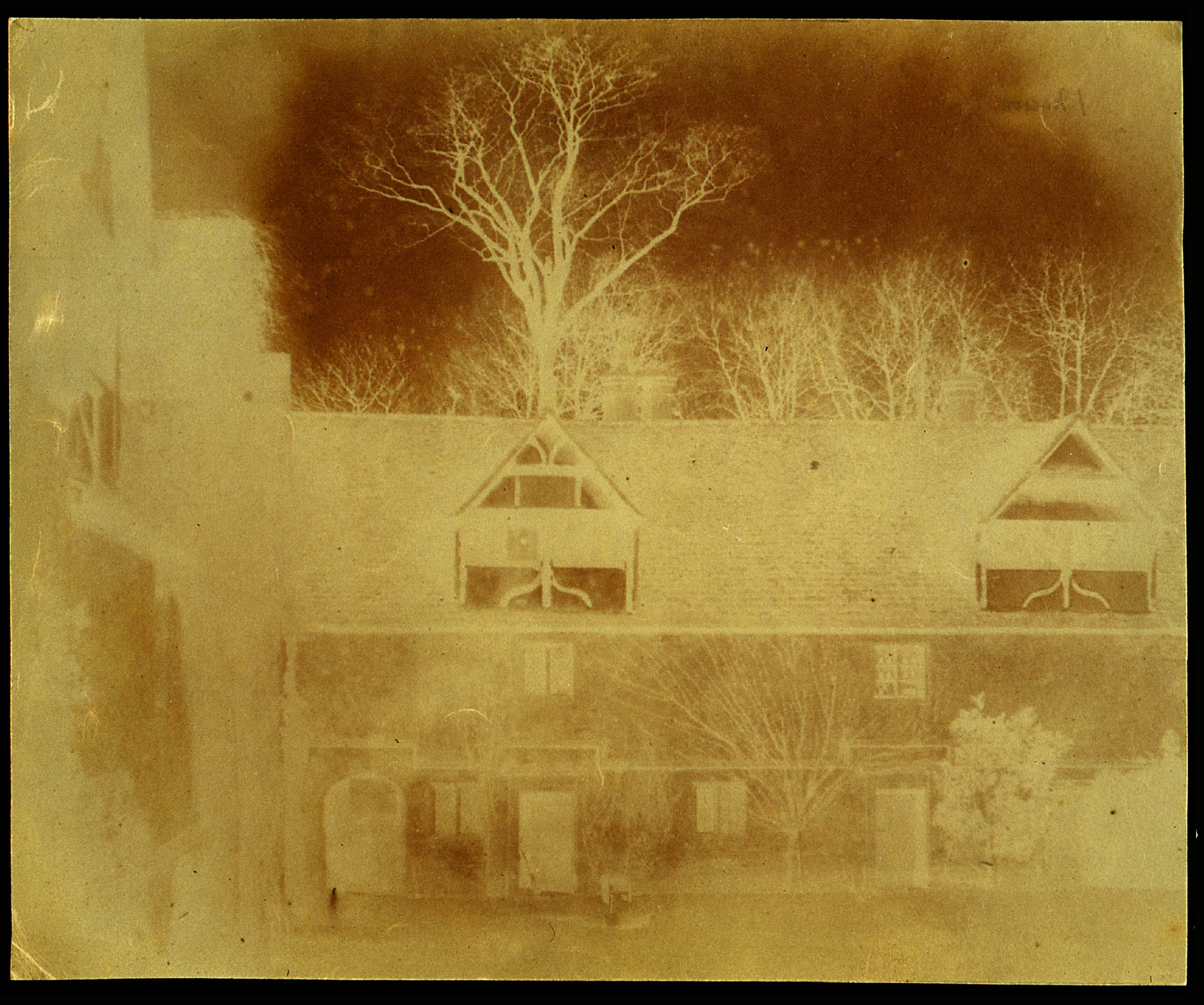 I don’t know how many times I briefly glanced at this negative of the North courtyard. With the bare trees betraying its wintry birth, it is typical of many Talbot negatives of the everyday scene from the first floor windows of Lacock Abbey. However, he dated this negative in pencil and it was through an early database that the correlation with the above images became evident. There are no known surviving prints from this negative, but with digital processing an enlargement of an area of interest is readily made with a facility that would have astonished Talbot. There in the doorway is our broom, but even more significantly in the foreground sits one of Talbot’s cameras on a primitive stand (the likes of which can be seen in Catherine Weed Ward’s photograph in last week’s blog). 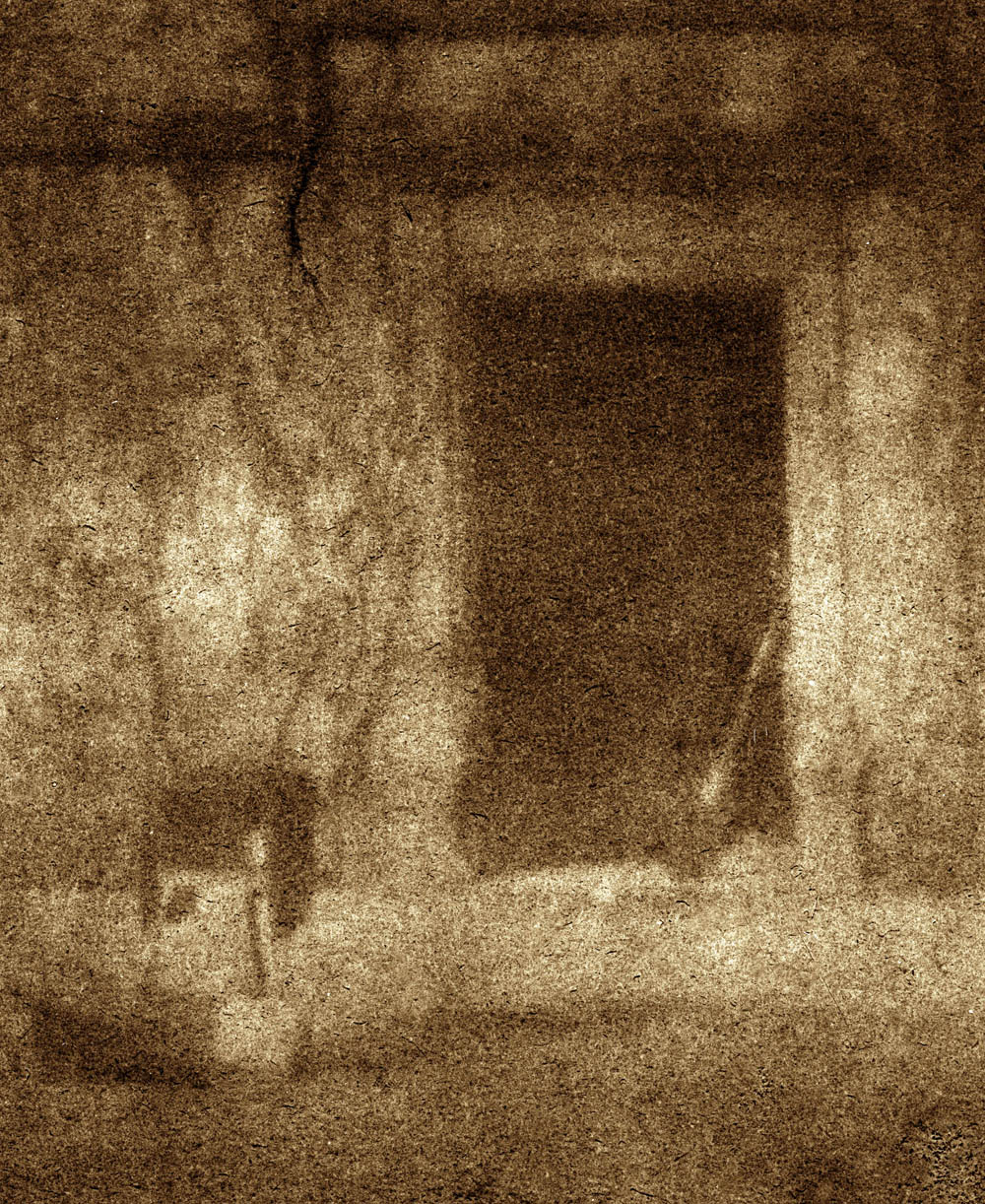 Here we have a photograph of a photograph being made, a true rarity in our historical record. Was this documentation made by Talbot himself while taking a break from his efforts? Had it started to rain and when he ducked indoors he decided to make some use of idle time? Or did Lady Elisabeth instruct Nicolaas Henneman to hurry up and make a ‘snapshot’ of her son’s proceedings in the courtyard?

The next known step was in April 1844, when Talbot finally successfully combined all the elements that had been lingering in his imagination. A more robust broom, careful alignment of the shadows, a balancing lantern and increasing sophistication in rendering tone all came together to create this masterful image. 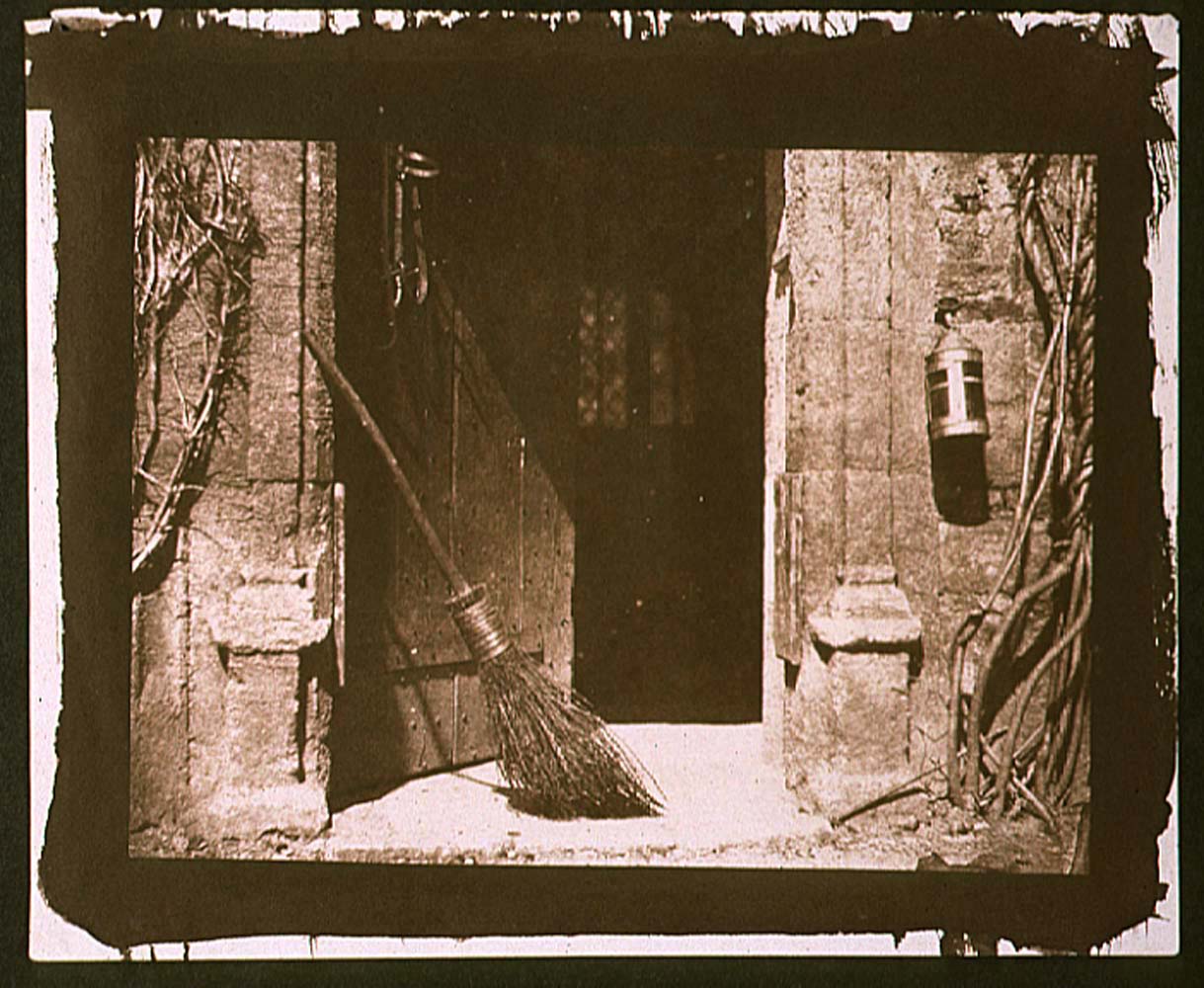 Although Talbot himself would be quick to credit Nature as the artist, his skilled handiwork is shown in the confident brushmarks of the chemical coatings. We may never know if Lady Elisabeth or others guided him towards this final realisation of a great idea. When he published as a plate in The Pencil of Nature, the Art-Union praised the picture which “presents literally an open door, before which stands a broom, and near which hangs a lantern. It is of course an effect of sunshine, and the microscopic execution sets at nought the work of human hands. With this broom the famous broom of Wouvermans must never be compared: it becomes at once a clumsy imitation.” The Literary Gazette delighted in the “broom and a lantern, perfect in reflected form, and rich in tone of colour. A back window in the darker central tint is deliciously bright, yet dim and faithful to the reality.”

There is one final visual surprise in this series of images. I must confess that I had the privilege of looking at so many copies of The Open Door over the years that while my eyes may have been open my brain was not. One day, glancing over at an array of prints at the then National Museum of Photography, Film & Television at Bradford, suddenly the shadow moved! 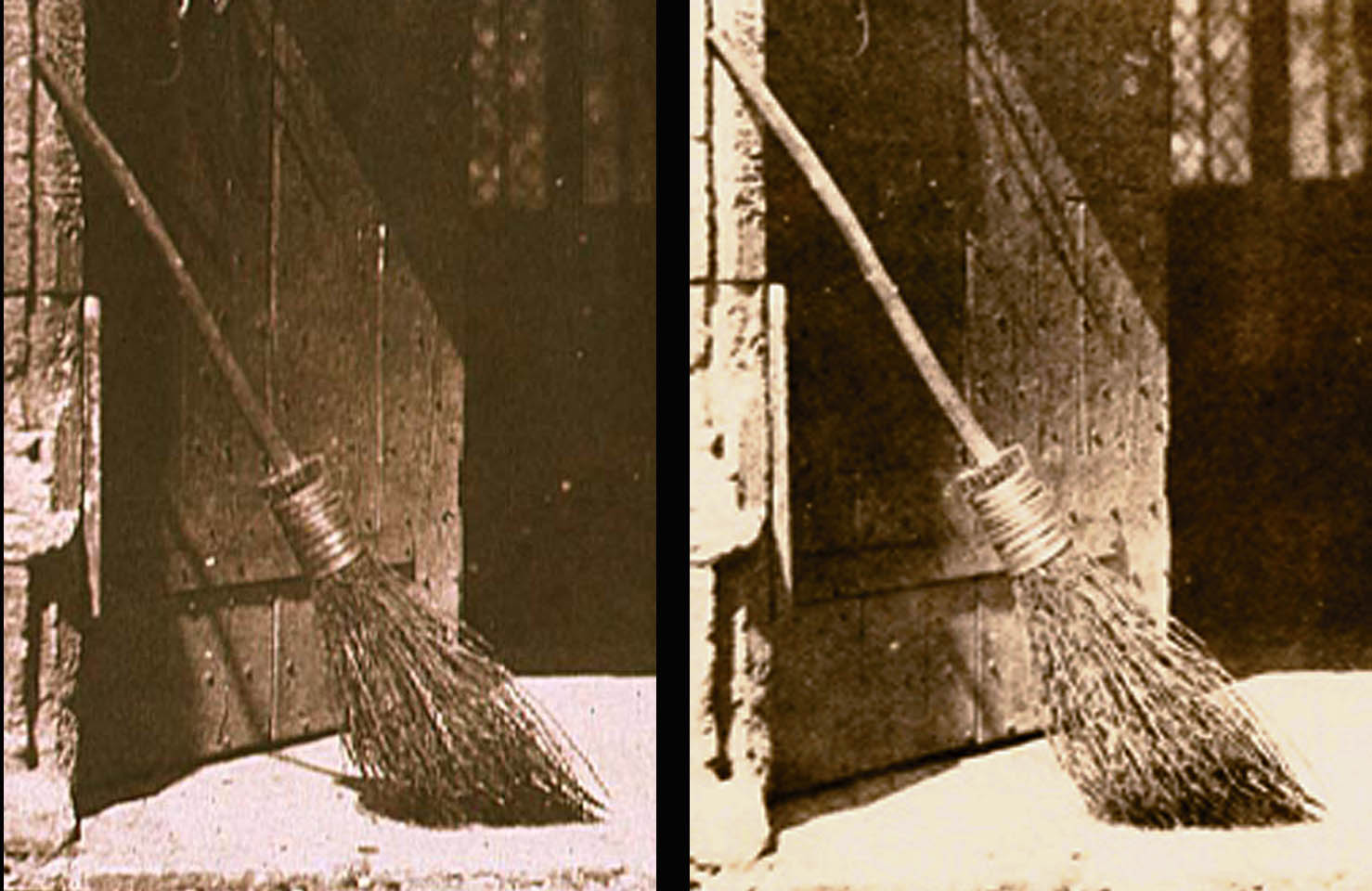 Of course, once Talbot had gone to all the effort of getting everything just right, it was natural to take more than one negative. But even in the minutes between exposures, the earth’s rotation re-arranged the shadows. Those who remember photographing landscapes with a view camera on a tripod (and those few lovely souls who continue this tradition) will readily understand just how speedy and emphatic this change can be and how much influence it can have on the composition. For publication, Talbot picked the negative with a bit wider triangle of light between the broom and its shadow, a good choice from my point of view. And that displaced shadow in an array of seemingly identical prints is one more proof that there is no such thing as duplicates in Talbot’s hand-made prints and negatives.