While I am normally averse to quoting dictionaries, today let us start with the OED‘s definition of a snapshot: ‘a quick or hurried shot taken without deliberate aim, esp. one at a rising bird or quickly moving animal.’ They establish its first use in conjunction with the misfortune of some pheasants in 1808. It was Talbot’s friend Sir John Herschel (himself quite a bird shooter in his youth) who first applied the term to photography, musing in 1860 about the possibility of “taking a photograph, as it were, by a snap-shot – of securing a picture in a tenth of a second of time….” In the era of selfies, we accept the term casually (except for academics, for whom ‘vernacular photography’ seems to be the flavour of the day) to mean an unplanned and not necessarily anticipated photograph, most often a candid portrait of friends or family. Last week we explored the birth of the calotype, the developed negative that amplified a latent image many thousands of times through chemistry to produce a visible result. The most dramatic but certainly not the sole implication of this was for camera times, reducing exposures that were once measured in decades of minutes to mere seconds. The calotype also permitted Talbot to explore new subject matter and to photograph under trying conditions (often hurdles that were self-imposed). One of the most immediate of these territories was portraiture.

Fair warning: some of the following are not amongst Talbot’s most pretty pictures. But I think that they are among his most moving. 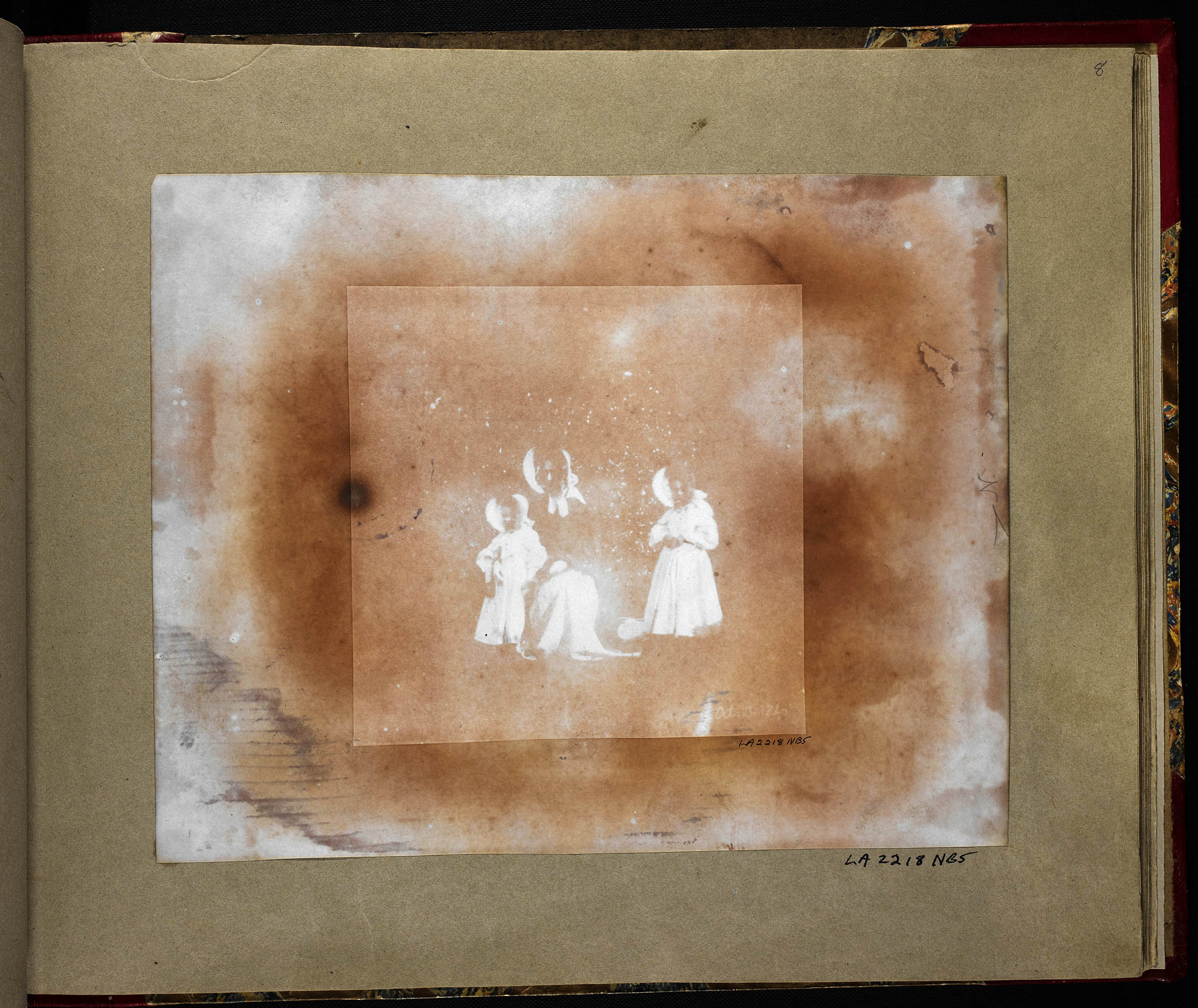 Until the recent digital age, most snapshots wound up in albums, a practice that had its origins within the Lacock Abbey household.  This engaging portrait of Talbot’s wife Constance and his two daughters Ela Theresa (b 1835) and  Rosamond Constance (b 1838) was taken on 13 October 1840, just three weeks after Talbot discovered the calotype.  The trio had to hold still for a minute and a half exposure, easily accomplished by Constance sitting but perhaps a bit challenging and certainly puzzling for the two little girls.  How many times has this sort of family grouping been emulated over the years?  Yet this is the very first time that such a photograph ever appeared in a family album.  In technical terms, the white dresses reflected the sunlight nicely, but the blue sensitivity of the calotype paper darkened the skin tones and especially the green foliage in the background.  In the spring of 1841, Talbot announced his calotype process to the public, referring back to the period of this picture and highlighting that “one of the most important applications of the new process, and most likely to prove generally interesting, is, undoubtedly, the taking of portraits. I made trial of it last October; and found that the experiment readily succeeded. Half-a-minute appeared to be sufficient in sunshine, and four or five minutes when a person was seated in the shade, but in the open air. After a few portraits had been made, enough to shew that it could be done without difficulty, the experiments were adjourned to a more favourable season.” 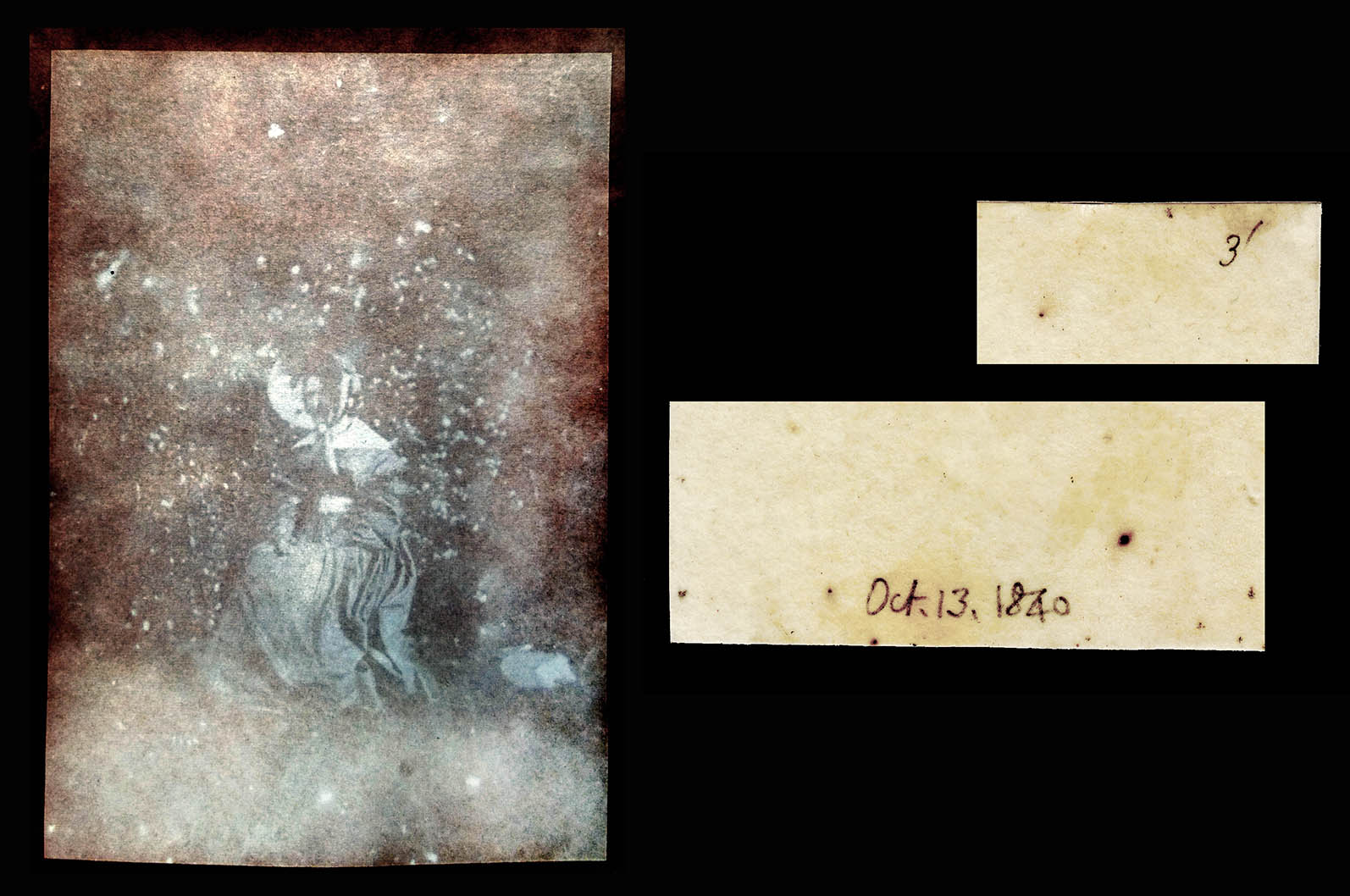 The portrait of Constance and two of her daughters is in the album assembled by Amélina Petit de Billier (1798-1876), originally a governess to the Talbot family and known within as ‘Mamie’ or  ‘Amandier.  A refugee from France, she was later taken in as part of the family and was buried next to Henry at Lacock, just to the right of the tombstone in the blog of a fortnight ago.  In fact, it was her bequest that first enabled central heating in Lacock Abbey, but I digress.  Amélina’s portrait above was taken the same day as the one of Talbot’s family, but free from the limitation of keeping the small children still Talbot was able to use twice the exposure, three minutes, yielding better skin tones.  Talbot recorded the details on the back of the negative (right) and also in his manuscript negative listing.  Constance took only a distant interest in her husband’s photography and it was his mother, Lady Elisabeth Feilding, who was far more active in directing pictures, promoting the process to the public, and in recording the art’s early history.  Amélina was next in line for these roles, particularly assisting Talbot later when he tried to introduce the calotype into France.  She is my understudy heroine in the saga of Talbot’s photographic history. 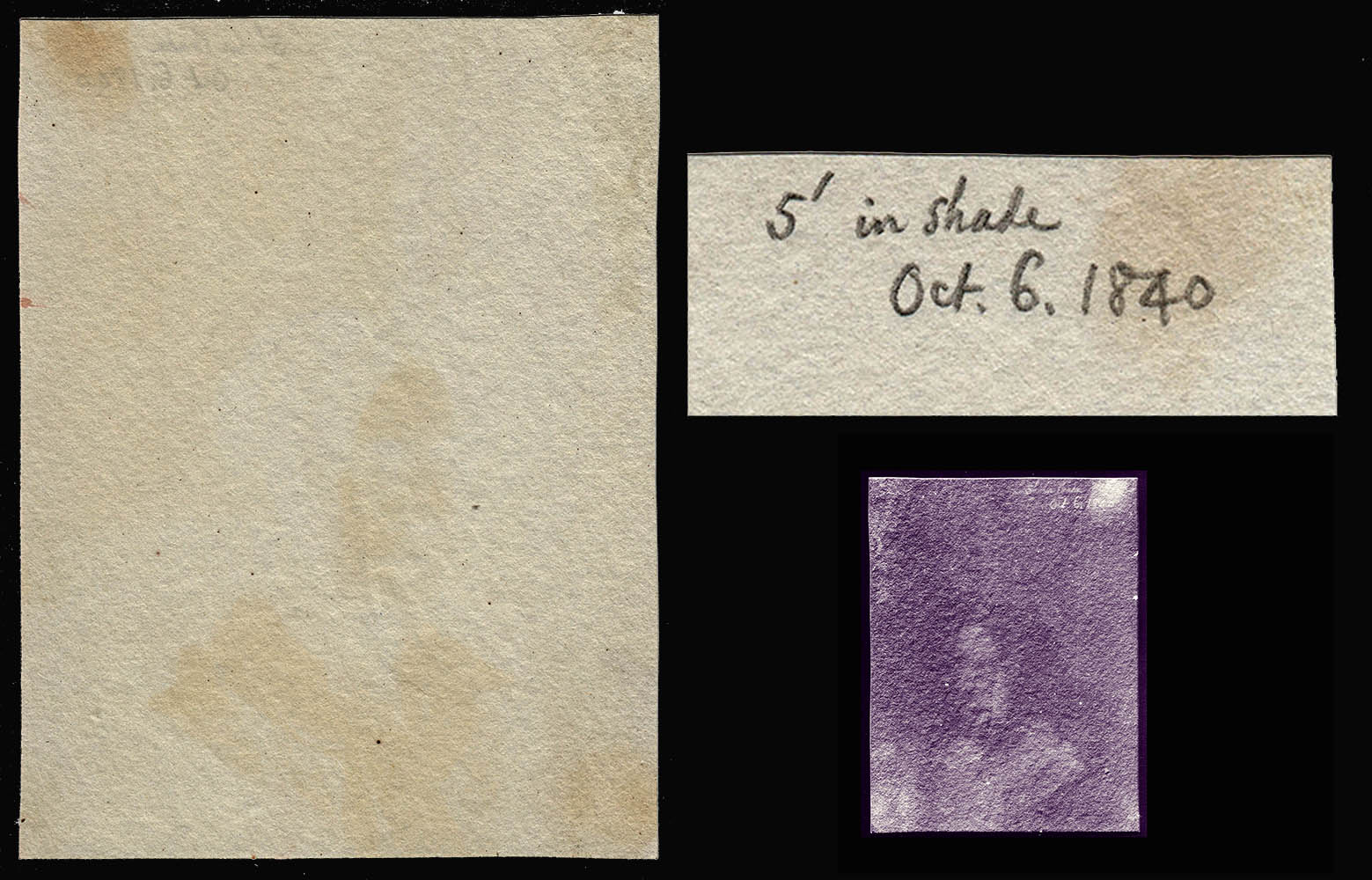 While there had been some success with portraits with the daguerreotype in late 1839 and 1840 the attempts were largely experimental, tortuous to the subject, and their heavy silvered copper plates certainly ineligible for inclusion in the family album.  Talbot’s photogenic drawing process, marvelous as it was, was impractical for portraiture.  The calotype negative above is the first portrait that Talbot ever attempted, taken of Constance “without sun” in a five minute exposure on 6 October.  This was less than a fortnight after he discovered the developing process.  There are no known prints from this negative – perhaps it was always weak – but the image is still clearly visible and the digital print lower right gives a rough idea of the picture’s composition, basically with the head centred in the frame.  Was the session set up in the shade in order to make his wife more comfortable during this extended pose? or was it an intentional technical challenge to test the speed of the new process? 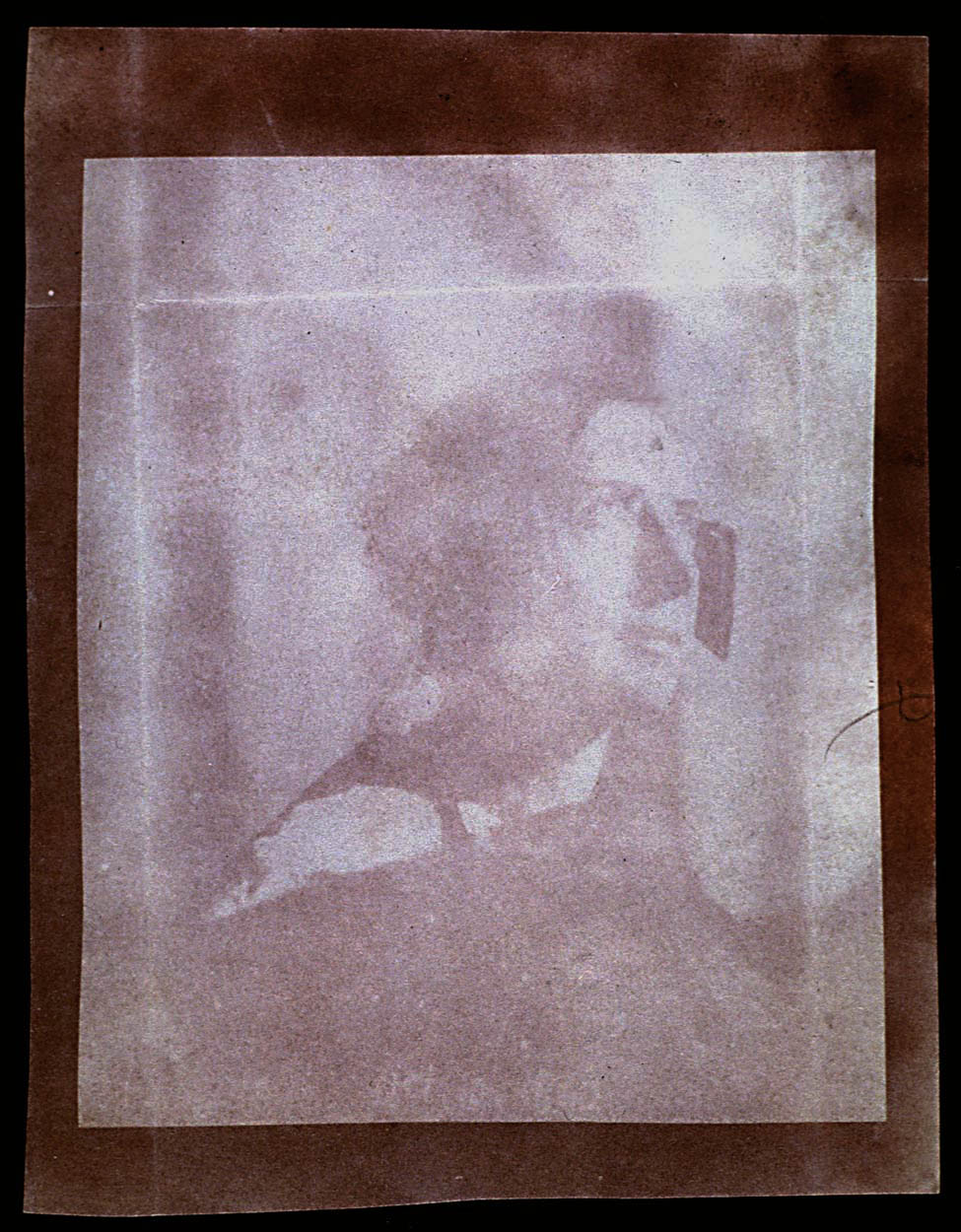 This is Talbot’s fourth known attempt at portraiture, again enlisting Constance, and it is spectacular. Sensitively posed and intimate, it exploits a low camera angle to exalt the subject. One could be reminded of a traditional Madonna, or let the mind wander into imagining this as presaging Julia Margaret Cameron’s portraits, or less poetically acknowledge that Constance facing the light enabled a more practical exposure, in this case thirty seconds. Constance appears to be resting her head on something, likely a chair back 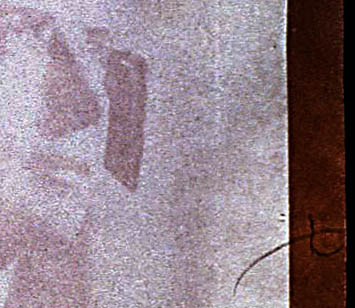 and the pencil X on the printing paper marks the light sensitive side.  In addition to being a beautiful depiction of his loved one, there is a technical significance hidden in this very early calotype. Even half a minute staring into the bright sunlight could be uncomfortable for Constance, so Talbot filtered the sunlight through soothing blue glass, a practice that would become common in commercial portrait studios in the decades to follow. Screening out the red rays had little effect on the calotype paper, for the blue light – the actinic light – was all that mattered, a point particularly emphasised by the researches of Sir John Herschel.  The idea of restricting the light to the blue range had been employed by Talbot for some time. For example, on 10 February 1839 he recorded the thought to “have a brass frame made, with squares to hold blue glass and perhaps also green glass. Fix before 17 inch mirror therefore rays will pass twice through it, and throw them on a flower, a bust, or on the lens of the microscope.”  The dated and inscribed negative for this image is titled in Talbot’s manuscript negative list.  This is the only known surviving print. Why was it folded (most likely in Talbot’s day)?  The few remaining early portrait prints are usually tightly cropped and perhaps this was to indicate where the shears were to travel.  Or perhaps the folding was for insertion into a frame?  In either case, fortunately for us the print was not trimmed, and given its vulnerable state of fixing, was not openly displayed in a frame for long, if at all.

• Questions or Comments? Please contact Prof Schaaf directly at larry.schaaf@bodleian.ox.ac.uk  • Sir John Herschel, “Instantaneous Photography,” The Photographic News, v. 4 no. 88, 11 May 1860, p. 13.  • WHFT, Constance with her daughters Rosamond and Ela, salt print from a calotype negative, 13 October 1840; Fox Talbot Collection, the British Library, London, Schaaf 3841.  The album NB5, assembled by Amélina Petit, contains prints with known dates of 1840-1841 and is inscribed “Vues photographiques facit l’inventeur du Calotype W. Henry Fox Talbot Esq, appartement a Mlle. A.P.”  • WHFT, Letter to the Editor, 5 February 1841, in The Literary Gazette, no. 1256, 13 February 1841, p. 108, Talbot Correspondence Document no 04191.   • WHFT, Mlle. Amelina, 3′, salt print from a calotype negative, 13 October 1840;  Talbot Collection, the National Media Museum, Bradford, 1937-365/29.  The negative is in the Photographic History Collection, Smithsonian’s National Museum of American History, 1995.0206.057; Schaaf 2506.  The title comes from Talbot’s negative listing in the Fox Talbot Collection, the British Library, London. • WHFT, Constance, calotype negative, 6 October 1840; Photographic History Collection, Smithsonian’s National Museum of American History,  1995.0206.088, Schaaf 2493. While there are no known prints of this, there are several of the next portrait of Constance, taken two days later; one is illustrated in Schaaf, Sun Pictures Catalogue Nine, William Henry Fox Talbot: Friends and Relations (New York: Hans P. Kraus, Jr., Inc., 1999), plate 2.  • WHFT, C’s portrait, 30″ blue glass , salt print from a calotype negative, 10 October 1840; Royal Photographic Society Collection, the National Media Museum, Bradford, RPS25130; Schaaf 2503. • John Herschel followed in the footsteps of the pioneering research by his father, William. Sir John’s research notes have yet to be studied adequately; two pages of his research notebook that dealt specifically with the effects of different colors of light, with examples attached, are illustrated in my Out of the Shadows: Herschel, Talbot & the Invention of Photography (London: Yale University Press, 1992), plate 32. • This and several other references to using blue light can be seen in context in facsimile and transcription in my Records of the Dawn of Photography: Talbot’s Notebooks P & Q (Cambridge: Cambridge University Press, 1996).