In my periodic visits to Lacock Abbey, Talbot’s great-great-grandson, the late Anthony Burnett-Brown very patiently put up with a lot of odd requests.  One was to find a particular piece of ancient painted glass.  We searched all the insets to the windows in the Abbey, spotting similar ones but not the particular one that I sought.  Finally during one stay he greeted my morning by opening a desk drawer in his study.  Out came a lovely little piece of glass.  I never thought to ask where or when he had located it (I spotted no empty window frames!), but happily that artifact is now safely preserved in the Fox Talbot Archive at the Bodleian Libraries. 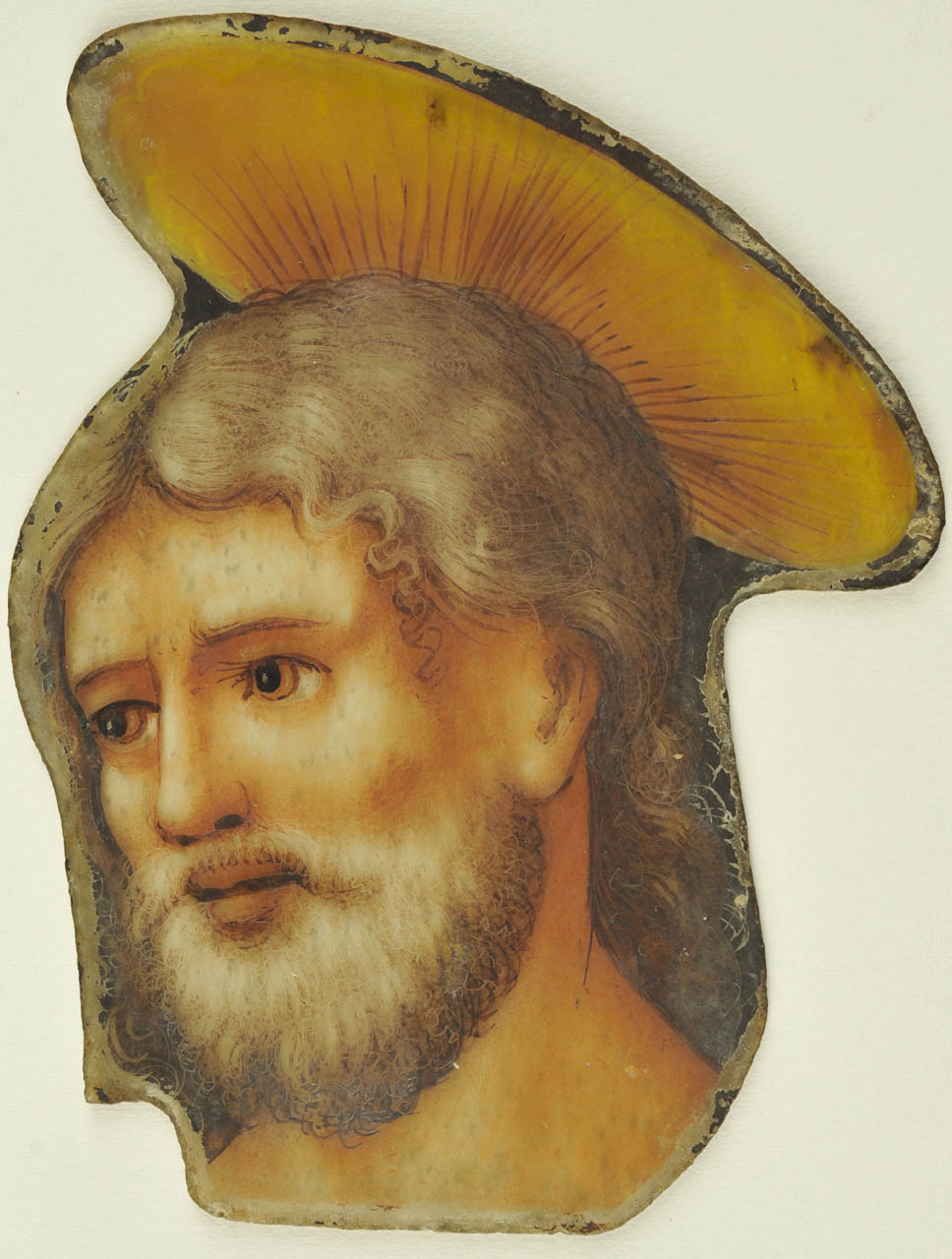 Probably the work of the famous glass painter, Engrand Leprince (d. 1531), this is almost certainly one of the pieces given to him in 1828 by his uncle, Lord Henry Petty Fitzmaurice, 3rd Marquess of Lansdowne (1780-1863), an MP and noted statesman. This was shortly after Talbot had moved into Lacock Abbey for the first time and was starting to shape it to his own taste (and particularly to the strongly expressed opinions of his mother, Lady Elisabeth Feilding). Fitzmaurice had collected these from ‘an old church at Beauvais’ with the thought of decorating his own chapel at nearby Bowood, but found them insufficient for his grand scheme.

Earlier this week in Leiden I was surprised to find a previously unknown (to me) saint, part of a series derived from this original ‘negative’. 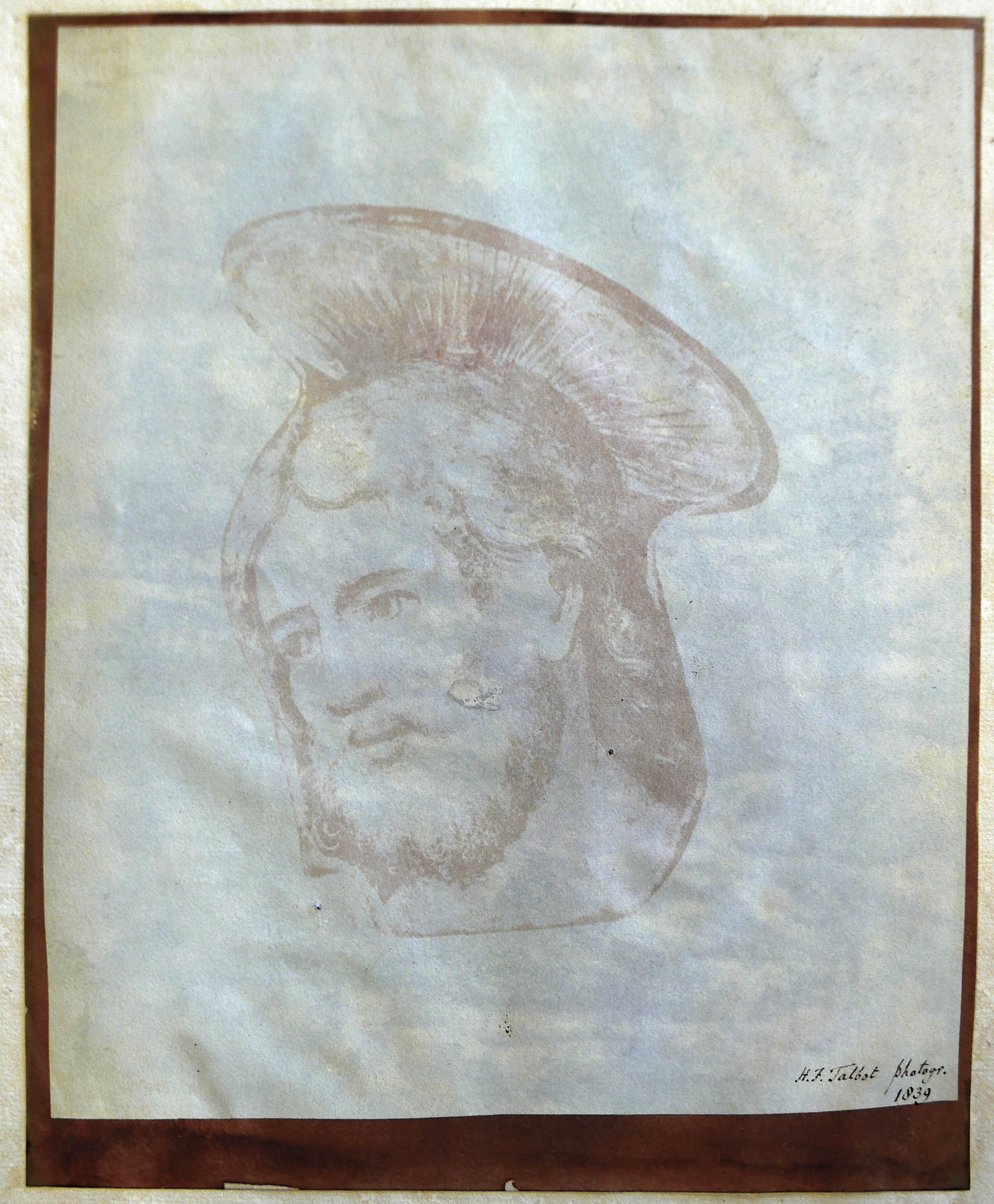 Talbot immediately recognized that the reproduction of works of art was going to prove to be one of the real strengths of photography – an application so commonplace today that we don’t even give it a thought – and this Head of an Unknown Saint (sometimes incorrectly captioned as a Portrait of Christ) was a favorite and continuing subject.  Lacking the clues that identify the saint, such as arrows or fish, we don’t know if this image had a particular appeal to Talbot or was merely convenient.   With this addition, there are now five prints and four known negatives of this piece of glass. 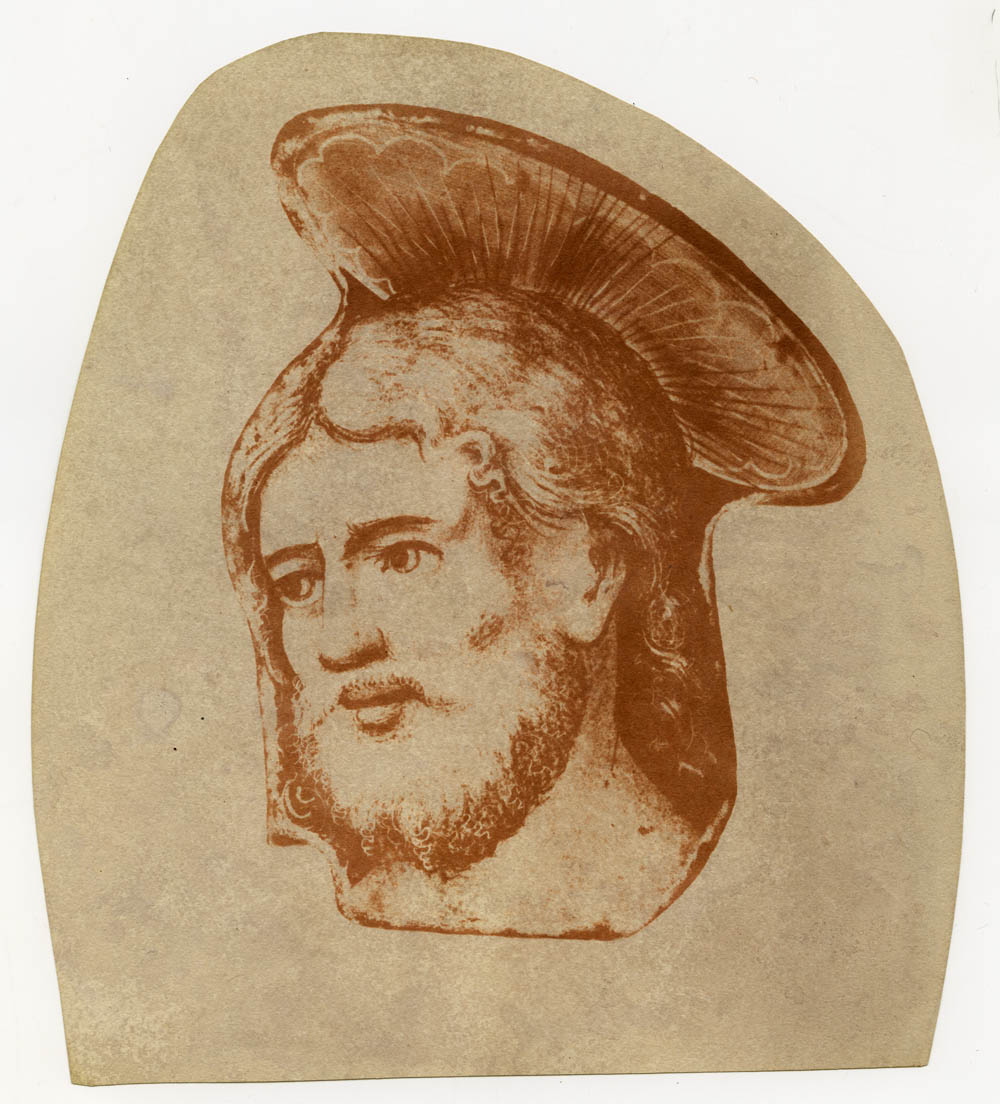 This print, in the Talbot Loan Collection at the Bodleian Libraries, is trimmed in Talbot’s characteristic exuberant style (see The curious case of the wandering shears blog of 29 May 2015).  It is this practise that makes it so difficult to associate negatives and prints with subjects like these, for often negatives were trimmed down in stages, leaving behind families of prints of varying dimensions and proportions.  The only thing we know about this particular print for sure is that it is inscribed in pencil “fx” on the verso, indicating fixing, and that it came from the same now unknown negative as the print in the Russian Academy of Sciences, which was signed and dated by Talbot April 1839.  It was carried to Russia that same month by Dr Joseph Hamel (for more on him, see the Towards the preservation of the whole blog of 5 June 2015).  Talbot must have distributed a number of these around this time, for on 27 April 1839 he wrote to Herschel that “I beg your acceptance of a Copy from old painted glass, re-transferred,” re-transferred being his term at the time for a print, before Herschel’s nomenclature of positive and negative was established.

In addition to accurately reproducing works of art, Talbot was interested in analyzing the effects of different colours of light on his sensitive papers.  Painted glass made for a convenient polychromic test source, easily printed by contact.  This was something that he recognized at the very beginning.  In July 1839, he recorded in his notebook P the use of this image during experiments on various fixing processes. 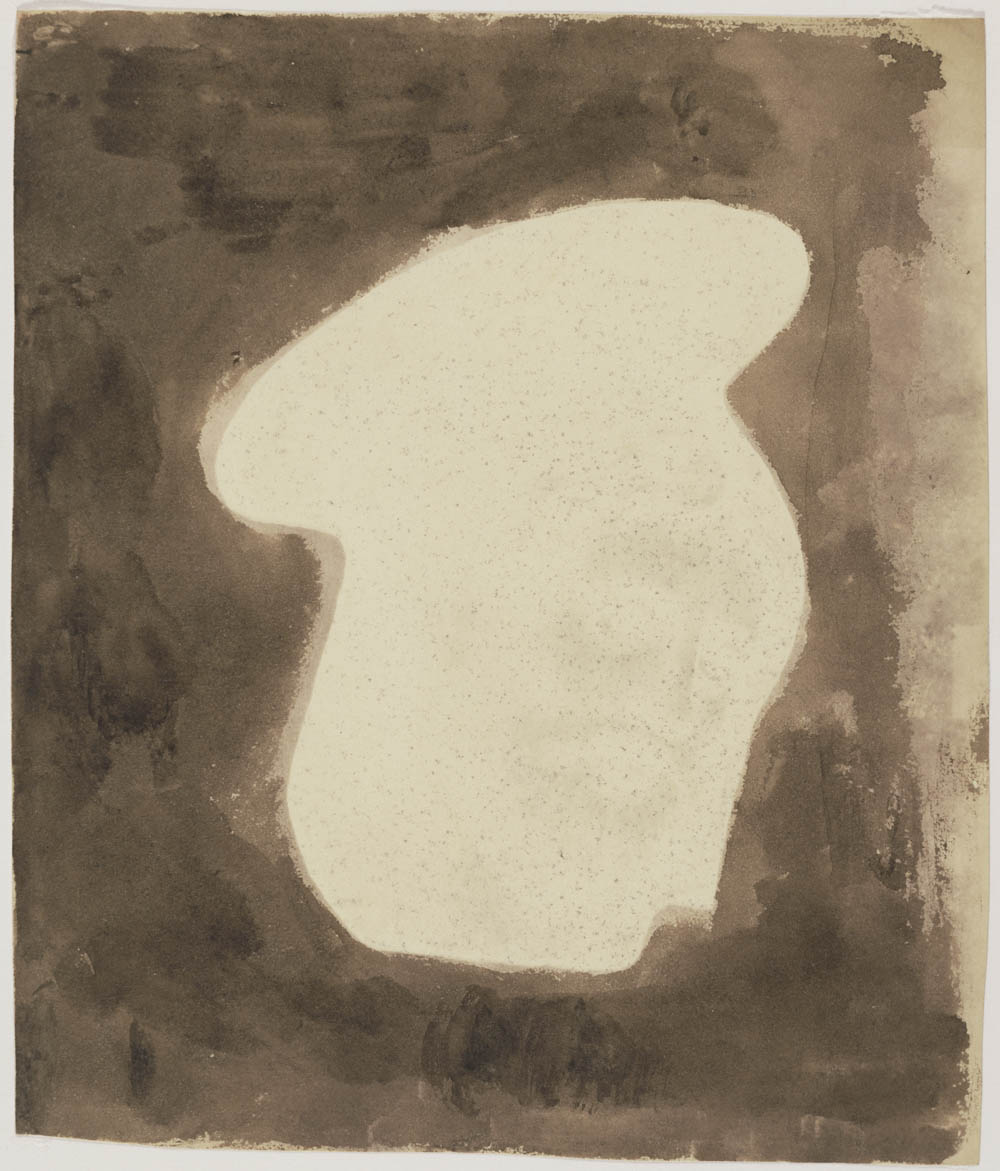 Through the collecting efforts of Arnold Crane, the J Paul Getty Museum in Los Angeles has the largest known collection of Unknown Saints, a print and four negatives, of which this is one, and they all seem to belong to this series of fixing experiments.

Returning to Leiden, it is clear from Talbot’s very careful signature that he was making a formal presentation of this particular print (note his use of photogr. for photographer, a sign that he was moving away from his own linguistically inflexible term of ‘photogenic drawing’ towards Herschel’s more versatile root term ‘photography’). 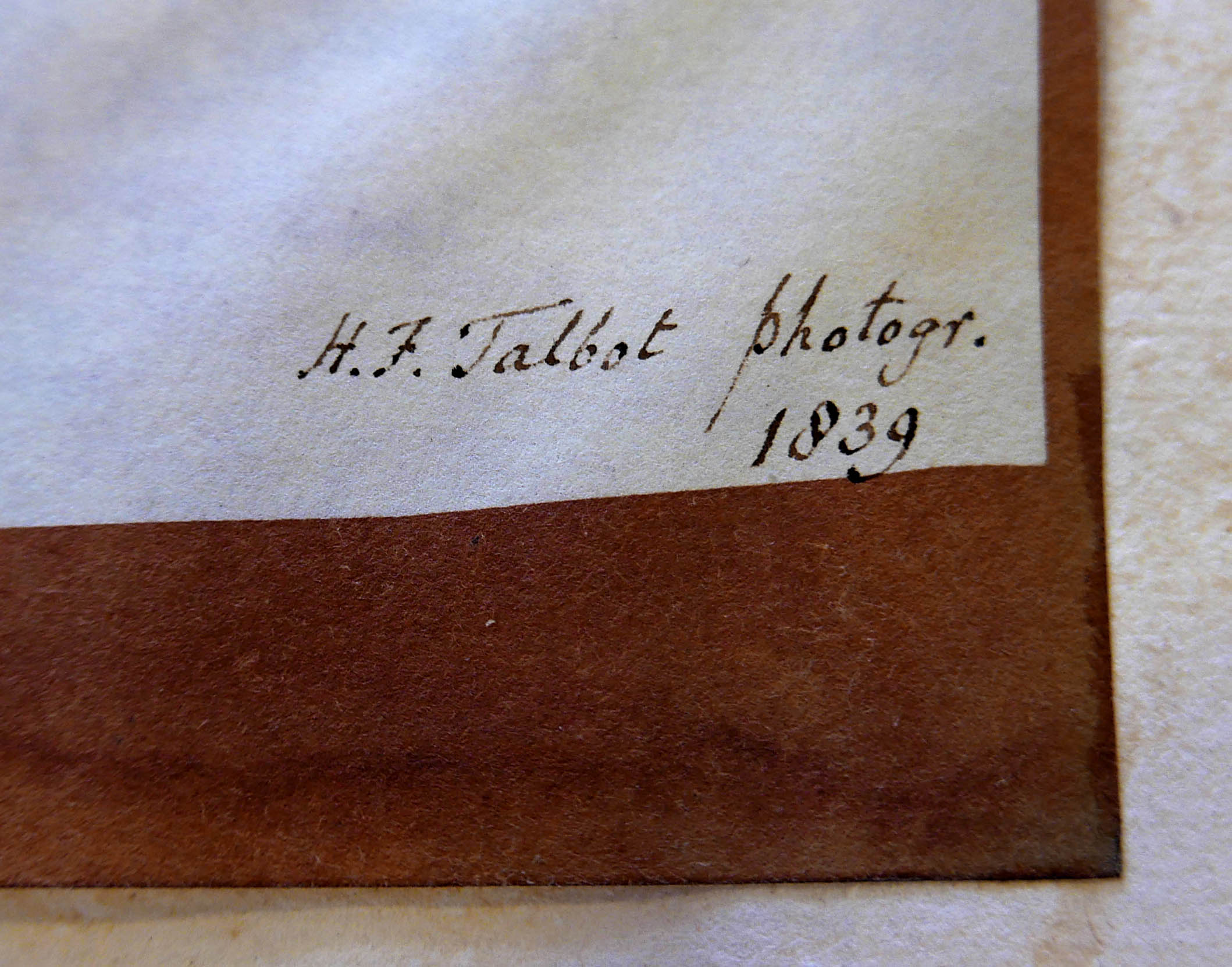 There are additional layers to the story, much yet to be discovered.  The Unknown Saint is mounted on one of several pages from a dis-bound album, magical and intriguing pages that contain not only some Talbots but also examples from Sir John Herschel and Hippolyte Bayard.  Mr J P Stam entered the Leiden auction house of Burgersdijk & Niermans (also known as Templum Salomonis) in 1940 and possibly salvaged these pages from a ‘breaker’, one that was the victim of the common practice for albums and books of extracting only the prints considered to be most marketable and disposing of the rest.  There is also a marbled paper front cover and several apparently miscellaneous prints in the group.  Stam served as Director of the Leiden University Press from 1945-1964 and the year after his retirement donated these pages to the University Library.  The donation record only indicates that they were already loose pages then and gives no further hint of provenance.

A caption below one of the Talbots reveals that the compiler of the album got these early examples directly from Jean-Baptiste Biot, the scientist who was a particularly close ally of Talbot in France.  In that same 27 April letter to Herschel, Talbot said that “M. Biot  expressed himself much pleased with those you sent him through me,” which probably was the source of the two Herschel examples on the album pages.  It is this sort of artifact that helps to illuminate the complex web of interconnections between the early photographic experimenters, adding to our understanding of these vital networks.

Hopefully, something short of divine intervention will allow us to discover who preserved the examples collected for him by Biot, and perhaps someday we can give today’s Unknown Saint a more complete identity than that of once being in the possession of The Unknown Photohistorian.