One never quite knows where Talbot’s wide-ranging imagination will take us.  The art form of cliché-verre, where a hand-drawn etching is copied onto photographic paper to make the final print is firmly associated in the art historical mind with the mid-19th c Barbizon School, particularly the works of Camille Carot, the most prolific of his colleagues with this process.  Typical of their output was Charles-François Daubigny’s 1862 Ducks in the Marshes. 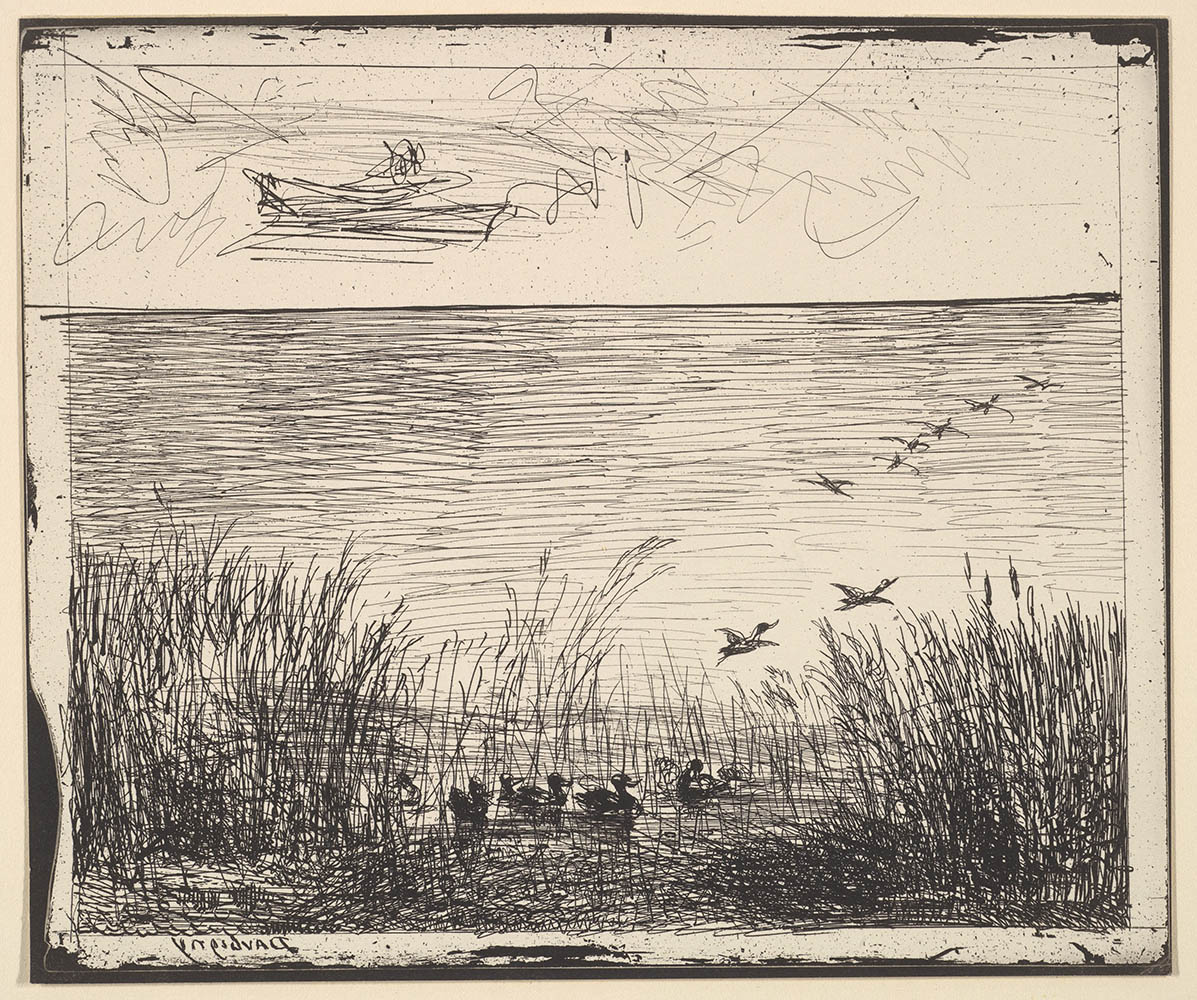 However, nearly three decades before this work was realised, Talbot characteristically had turned a dilemma into an opportunity to invent a new way of doing things. 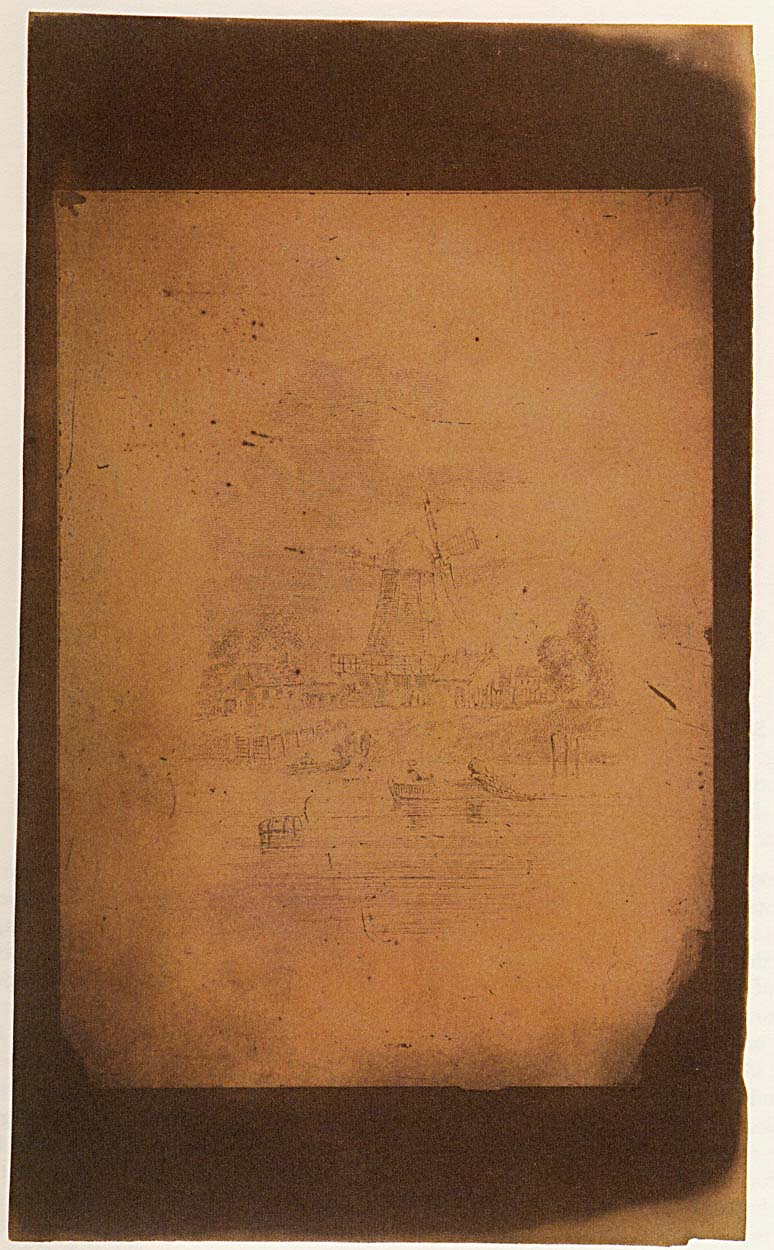 Talbot had conceived of the art of photography at Villa Melzi in Bellagio in October 1833 out of a frustration with his inability to draw.  Sometime in the spring of 1834 he invented what was to become to be known as the photogenic drawing process but at this early stage his paper was not sensitive enough to light to use in a camera.  Instead, he made what we call photograms, contact negatives of flat objects such as leaves and lace.  He continued to work on photography throughout 1834, setting the stage for his successful camera work in 1835, but his process was still limited.   As he was to explain in March 1839 to a botanist friend: “pray accept…the enclosed Photographic imitation of etching, an invention which I made in the autumn of 1834. The present specimen was however not made by myself, I cannot draw so well. Any body who can draw, may multiply their drawings in this manner, viz. by drawing them on varnished glass, & using photographic paper for the impressions…you who are a skilful draughtsman may very likely turn this branch of the art to good account.” The above print was probably made in 1839 from a cliché-verre ‘negative made in 1834, perhaps the very one referred to in this letter.

In his haste to respond to Daguerre’s announcement Talbot omitted this process in his first presentation to The Royal Society on 31 January.  However, he soon revealed it in an addendum to a “Note Respecting a New Kind of Sensitive Paper” a few weeks later.  In this communication, Talbot explained his “method of imitating etchings on copperplate…which, though not a real art of photogenic engraving (if I may assume such a process to exist) yet might easily be mistaken for it, if not explained. This was among the first applications which I made of my principle, nearly 5 years ago, & is performed in the following manner. Take a sheet of glass & smear it over with a solution of resin in turpentine. When half dry hold it over the smoke of a candle: the smoke will be absorbed by the resin, & altho’ the glass will be darkened as usual there will be a sort of glaze over the smoke, which will prevent it from rubbing off. Of course if any opaque varnish should be at hand it will be simpler to use that. On this blackened surface, when not quite dry, let any design whatever be made with a needle’s point, the lines of which will of course be transparent. When this is placed over a sheet of prepared paper, a very perfect copy is obtained every line which the needle has traced being represented by a dark line upon the paper. In the autumn of 1834, being then at Geneva, I tried several photogenic etchings in this way, which were executed for me by a friend, as I am not myself skilled at drawing….” Predicting its potential for limited editions of artists’ works, Talbot pointed out that “the chief expense will be from the silver used, the quantity of which is however small: but no press being wanted it cannot fail to be, on the whole, a very economical process.” 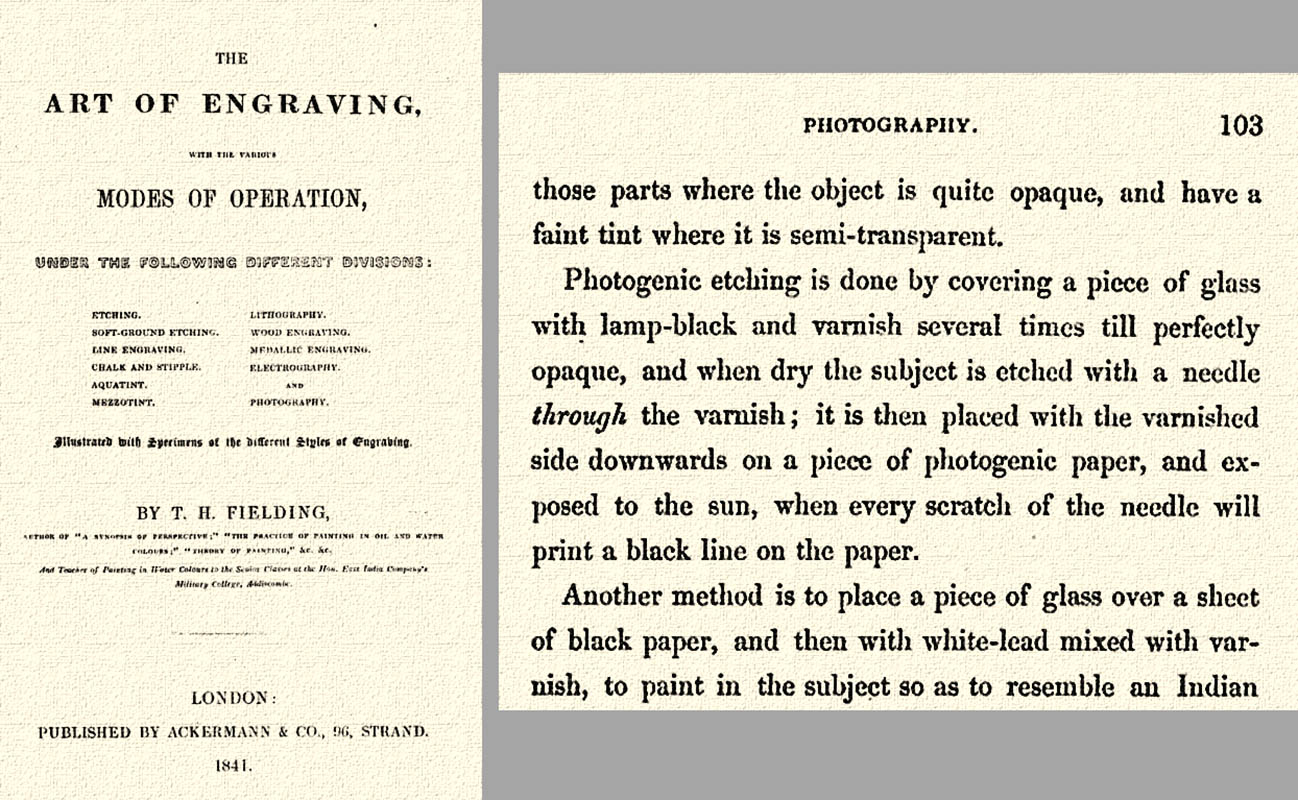 Although the term cliché-verre was not to be coined until some years later, the process practised by the Barbizons was identical to Talbot’s.  In fact, his contribution seems to have been forgotten almost immediately.  Theodore Henry Fielding’s Art of Engraving was wildly popular, due in no small part to his personal expertise as a painter and engraver.  Just two years after Talbot’s publication, Fielding described ‘Photogenic etching’, reverting back to Talbot’s earliest term for photography, as we see above one Talbot himself had started to move away from by March 1839.  Some of the art historical literature on the Barbizons briefly mention this early publication.  However, virtually all writings on this symbiotic relationship between etching and photography, right down to the present day, ignores Talbot as the inventor of the cliché-verre.  Just like photogenic drawing itself, he invented the process out of necessity, relying on some unidentified friend to trace the pattern into the varnish and then letting Nature do the printing.

• Questions or Comments? Please feel encouraged to contact Prof Schaaf directly at larry.schaaf@bodleian.ox.ac.uk   • Charles-François Daubigny (1817–1878), Ducks in the Marshes, cliché-verre, 1862, The Metropolitan Museum of Art, New York, 22.63.89.  •  WHFT, Villagio, salt print from a glass negative, prior to June 1839, negative likely drawn autumn 1834, private collection, Schaaf 1. The title ‘Villagio’ is taken from another print from this negative in the Bertoloni album in the Metropolitan Museum of Art, New York.  A print once owned by Charles Babbage was possibly printed earlier; it is now in the J Paul Getty Museum.  There is also a print in the Tokyo Fuji Art Museum and one in the John Dillwyn Llewelyn Collection, Bodleian Libraries, Oxford. •  WHFT to William Jackson Hooker, 26 March 1839. Royal Botanic Garden, Kew, EL13.141; Talbot Correspondence Document no 03845. • WHFT, “Note Respecting a New Kind of Sensitive Paper.” While the addendum was never published in full, a summary was published in the Proceedings of the Royal Society, v. 4 no. 37, 21 March 1839, p. 134.  The quoted passage is from the original manuscript of the paper as read, preserved in the Society’s Archive,  AP23.31. • An early and excellent review of the history of the cliché-verre was occasioned by the 1921 re-printing of some of the Barbizon works – see Osbert H. Barnard, “The ‘Clichés-verre’ of the Barbizon School,” The Print-collector’s Quarterly, v. 9 no. 2, April 1922, pp. 149-172.