“The stately edifices of the British Metropolis too frequently assume from the influence of our smoky atmosphere such a swarthy hue as wholly to obliterate the natural appearance of the stone of which they are constructed. This sooty covering destroys all harmony of colour, and leaves only the grandeur of form and proportions.  This picture of Westminster Abbey is an instance of it; the façade of the building being strongly and somewhat capriciously darkened by the atmospheric influence.” 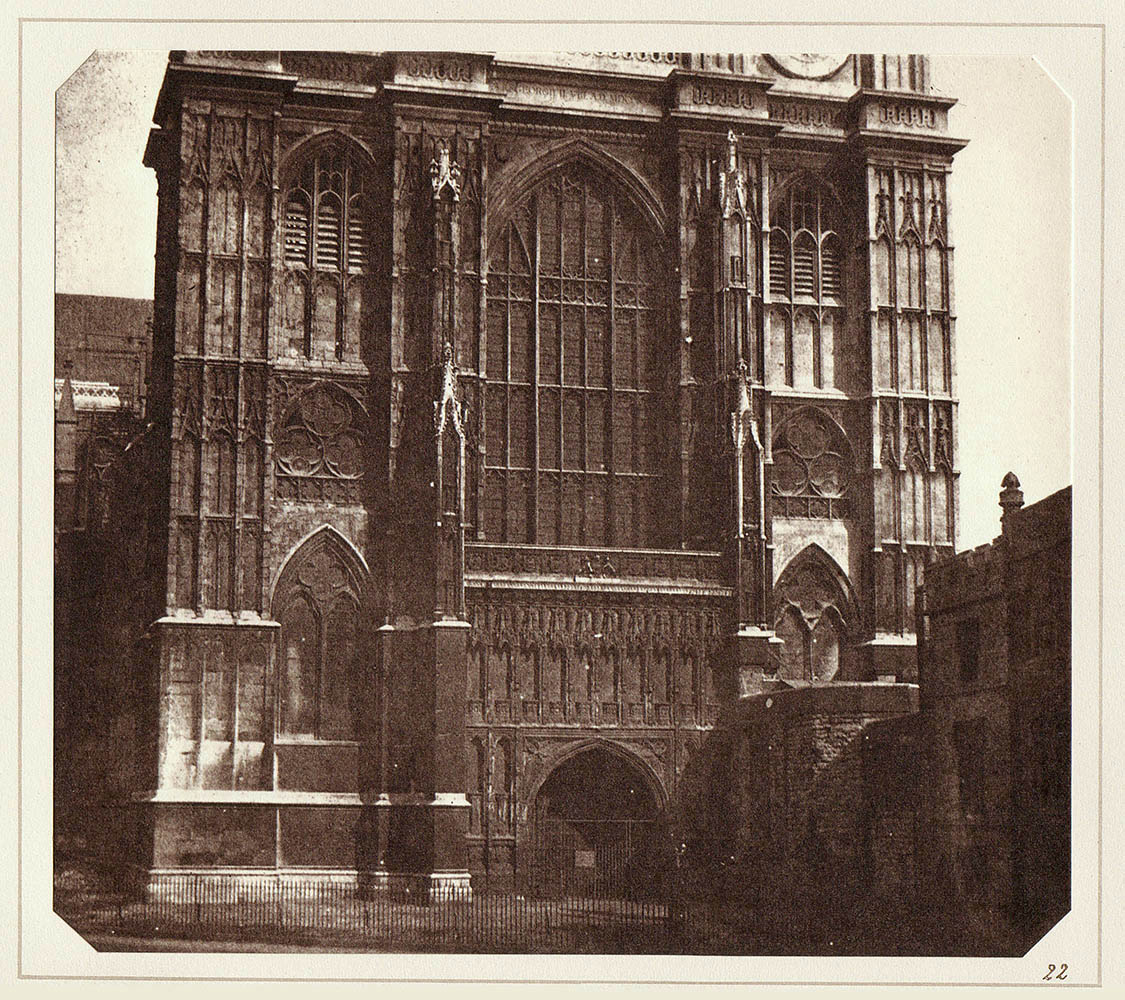 This was plate XXII in Talbot’s The Pencil of Nature, a pioneering publication meant to demonstrate the various applications of photography, including artistic, scientific and documentary.  Lithographic prints of important buildings had been growing in popularity in the years leading up to the introduction of photography and Talbot saw photographic prints as being a truthful and more economic means of fulfilling this demand.  But the very strength of photography – the veracity of Nature’s hand – was also its weakness, as he lamented here.  In Talbots lifetime, the penalty for years of burning coal for heating and increasing industrialisation was already being exacted, endangering health and obscuring the grandeur of inspirational architecture. A reviewer in the Literary Gazette was intrigued, thinking this to be “a rich view of Westminster Abbey, curiously affected by atmospheric tints.”  Those affected by breathing problems, such as Talbot’s friend Sir John Herschel, had a dramatically less romantic view of these ‘atmospheric tints’.

Talbot had originally conceived of The Pencil of Nature as having fifty plates.  However, he and Nicolaas Henneman discovered that scaling what had been a personal art up to a commercial level raised daunting challenges.  The early demise of this publication after less than half the projected photographs had been published threw the content out of balance and forced the omission of several important goals.  One of these was Talbot’s desire to include examples of other artists’ work, such as that of Adamson & Hill.  As it happens, Westminster Abbey is the only plate that was published that we can document to another photographer.  A substantial amount of manuscript material related to the publication of The Pencil survives, although scattered through several collections and generally not properly collated nor analysed. One sheet, unmistakably in Talbot’s hand, is the draft of the text for Westminster Abbey. 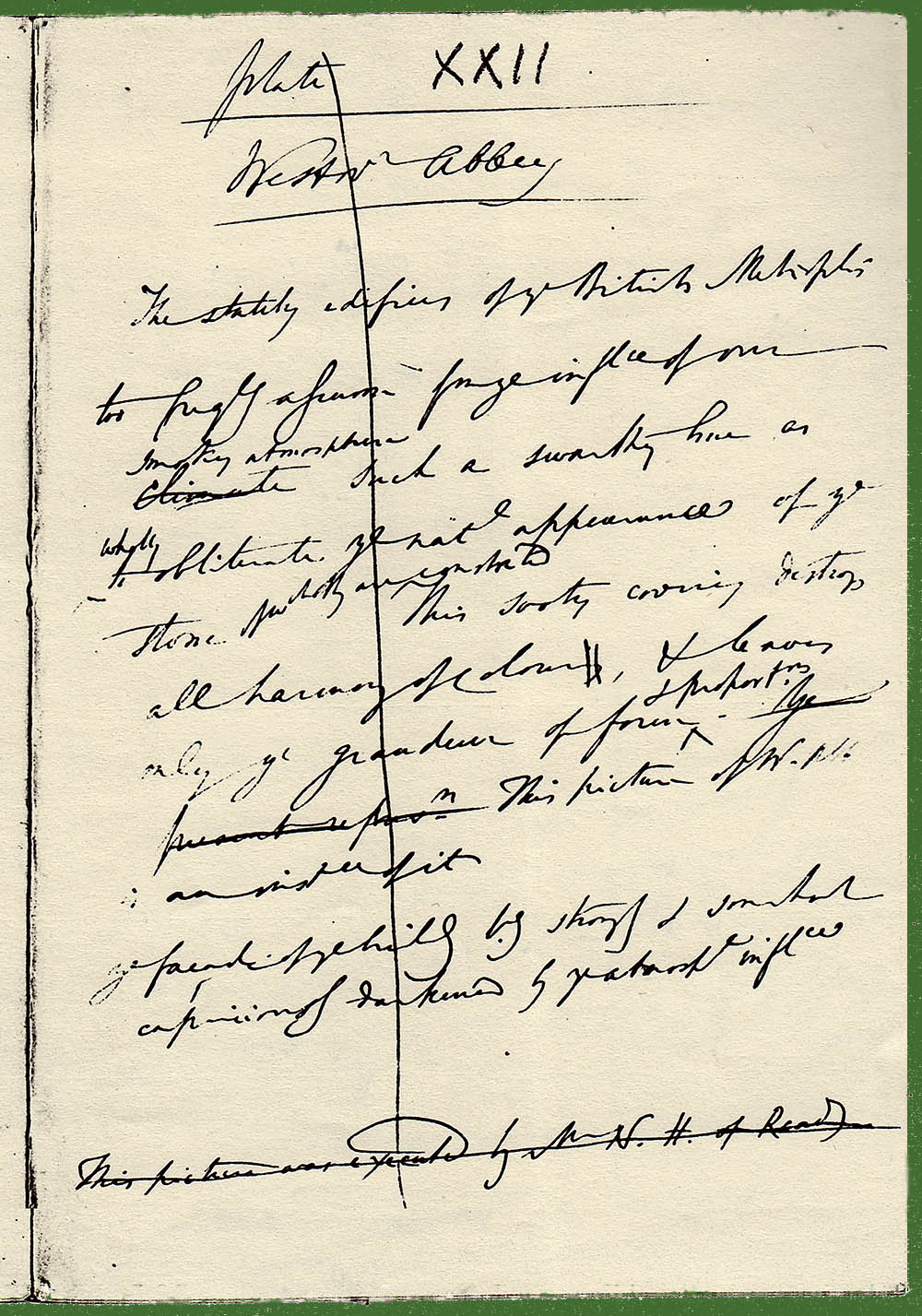 For those not familiar with the conventions of 19th century documents, the vertical line drawn through the text indicates that this prose had been copied.  Sometimes this line was added by the author as he transferred the words to a new sheet of paper, perhaps expanding the various contractions and abbreviations as he went along.  When found on a more finished manuscript it is often an indication that the typesetter has completed his work for printing.  More obviously, the horizontal lines flag deletions and in this case the really interesting one is the last line: “This picture was executed by Mr N H of Reading.”  We can begin to date this photograph from another Talbot document: in an 8 May 1844 entry in his Memoranda: London, May 1840 notebook he placed an order with Henneman for “50 of large gate W. Abbey.”  Given the bright light and sharply defined shadows, the negative was probably taken not much before this order.

When I first saw Westminster Abbey in the 1970s it still looked very much like Henneman’s photograph (albeit with less tranquility, crowded by multitudinous tourists).  Within a few years, however, I was fascinated by its transformation as the many years of soot were cleaned from its surface, revealing a warm yellowish-white stone as it was originally meant to be seen.  I suspect that many of our present readers have seen it no other way. Although the blue-sensitive nature of the calotype negative material would still render Westminster a bit more darkly than the eye perceives, I wonder what the feeling of Henneman’s photograph would have been if taken in more recent years, after the cleaning?  Perhaps one of the modern calotypists out there can demonstrate this?  At least the long-ish exposure time would blur the crowds. 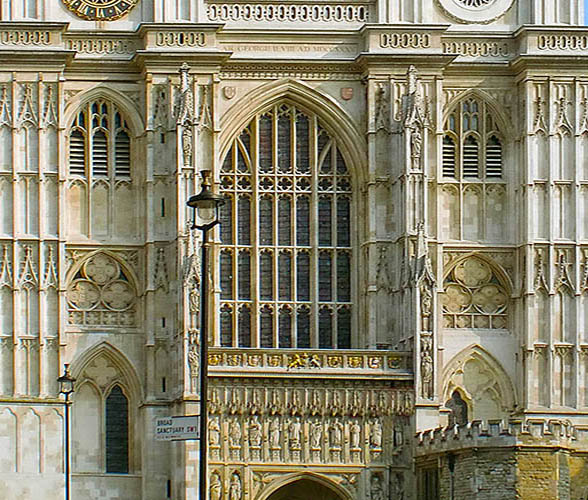 Given his gloom about the gloom, why did Talbot select this particular image of Westminster Abbey for publication?  Was he commenting on the price exacted by modernisation? Quite a few of his choices for The Pencil of Nature are enigmatic to us, but equally some were challenged by his contemporaries.  In order to find fierce critics, Talbot had no need to look beyond his family, particularly his sharp-minded and sharp-tongued mother, Lady Elisabeth Feilding.  While we cannot be absolutely positive about which view of the Abbey she had in front of her when she wrote in early 1845, clearly it wasn’t Henneman’s: “the ‘Westminster Abbey’ meets with boundless praise & is said to be far more beautiful than those published. Indeed I wish you had mounted it in number 2d ” 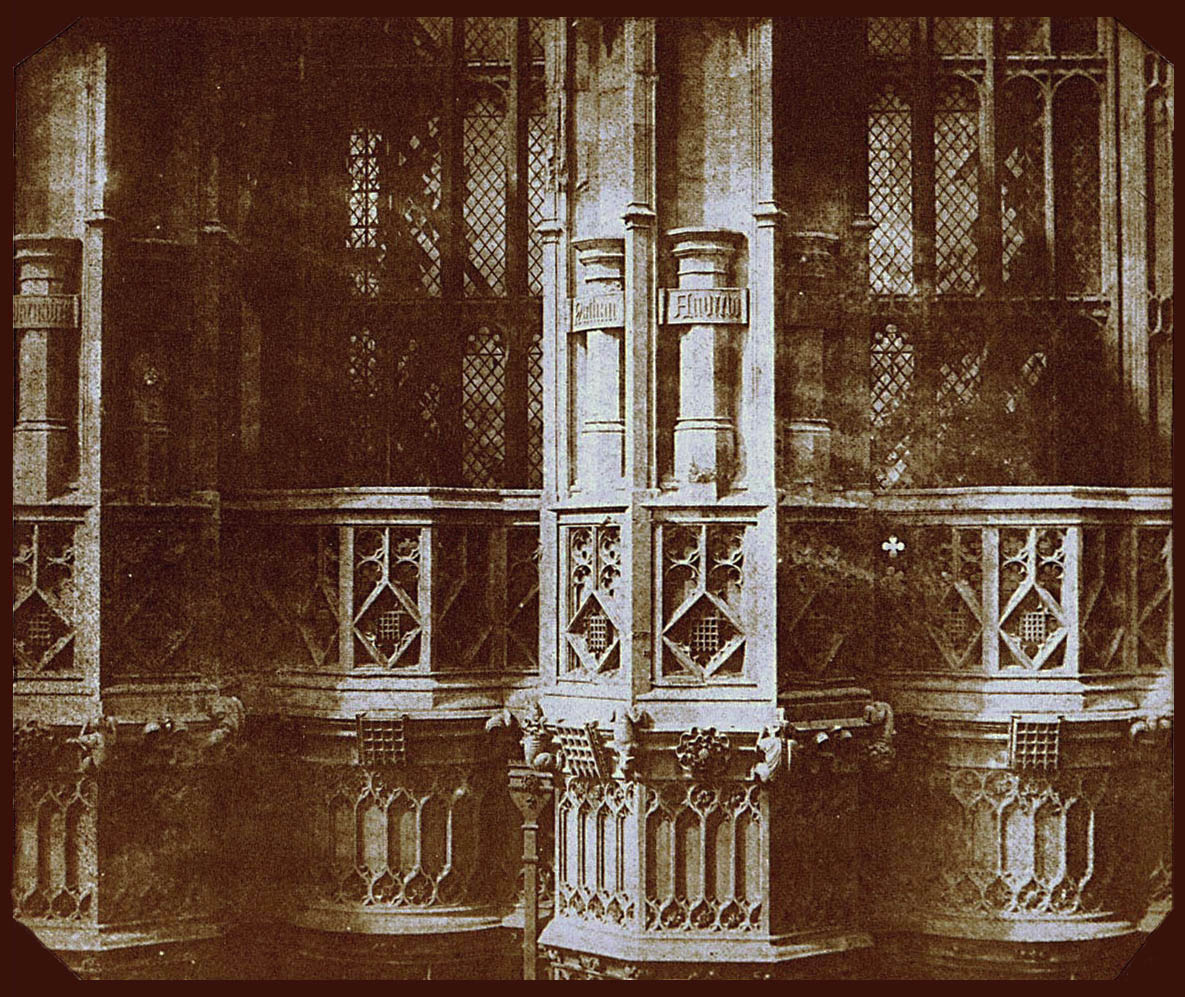 Perhaps this was the photograph she was referring to – it is one of several close variants.  Talbot had originally chosen it for fascicule five of The Pencil, for in one of his projected lists he included  “Balustrade Wr. Abbey.” Completed at the start of the 16h century, the Henry VII or Lady Chapel is one of the most deliciously ornamented structures in all of Europe, serving as the final resting place of numerous royalty, including Mary, Queen of Scots.  Light is an essential element of Talbot’s strikingly modern photograph of the upper details of the South front. Raking from the side, it brings into sharp relief the intricate chiseling.  The glare of the leaded glass windows adds liveliness and a sense of dimension, without allowing us to penetrate the secrets of the interior. 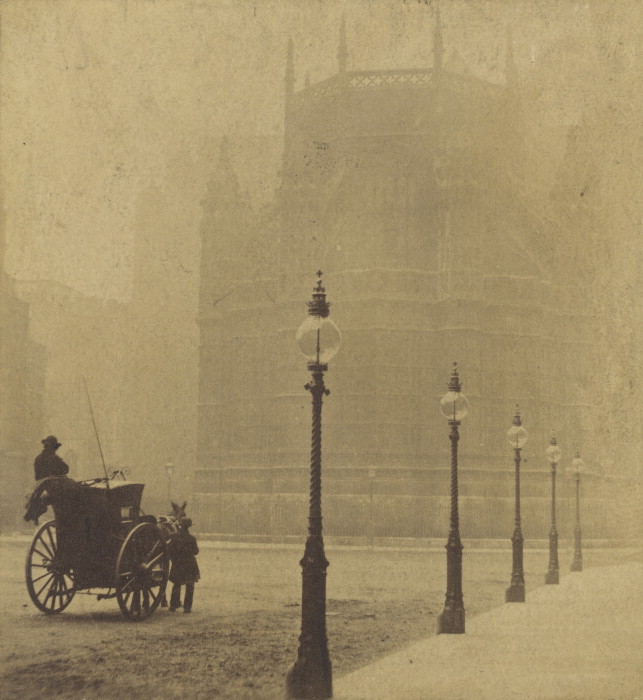 By getting so intimate with his subject, Talbot minimised the effects of the notorious London smog. How did he achieve this point of view, one normally only seen by the angels?  No lens nor manipulation of the camera would have made it possible from street level and he didn’t have access to the drone that a photographer might use today.  It is tempting to think that there must have been temporary scaffolding erected – Talbot is known to have taken advantage of this in other photographs – but scaffolding spaced at this remove would have been of no use to the stonemason.  Today we expect monumental structures like this to stand isolated from other buildings (although increasingly less so in London), but in Talbot’s day cathedrals still retained their ancient close relationship to the community surrounding them. He must have arranged to use one of the upper rooms of a house on College Street, immediately South of the Chapel. Around the same time as he took this photograph, a guide book writer groused that “a modern street builder would say the Abbey was smothered with buildings; – buildings the said builder would be eager to raze to the ground.”