Not only as the great friend and student of Sir John Herschel, Julia Margaret Cameron is increasingly recognised in her own right as one of the foundational figures in the art of photography. The bicentenary of her birth is being widely celebrated with many shows and lectures. If you can see only one photography exhibition this year, then make it the Victoria & Albert Museum’s Cameron exhibition (through 21 February). Richly filling the the relatively small gallery it inhabits, this exhibition presents a thought-provoking and nuanced examination of the process of creativity, institutional history, changes of taste in collecting – and, of course, displays many marvelous images.  If you know nothing about Cameron, you will be entranced. If you think you know a lot about Cameron already, be prepared for some surprises.

The last time I remember speaking formally about Cameron was as a component of my Slade Lectures more than ten years ago.  Indeed, I felt rather antique when put on the menu of this week’s conference in Oxford: Julia Margaret Cameron: Victorian Networks, Empire and the History of Photography today (the eight talks were refreshingly shorter than the lengthy title would suggest).  This did have the effect of prodding me into thinking once again about the relationship between Cameron and her “first teacher,” Sir John Herschel. Aside from Cameron’s portraits of him, mention of Herschel in the pre-digital age was almost certain to evoke a discussion of hypo (sodium thiosulphate), the fixer essential to making silver-based photographs permanent. Herschel did not invent hypo, but as early as 1819 he explored its properties affecting the compounds of silver. 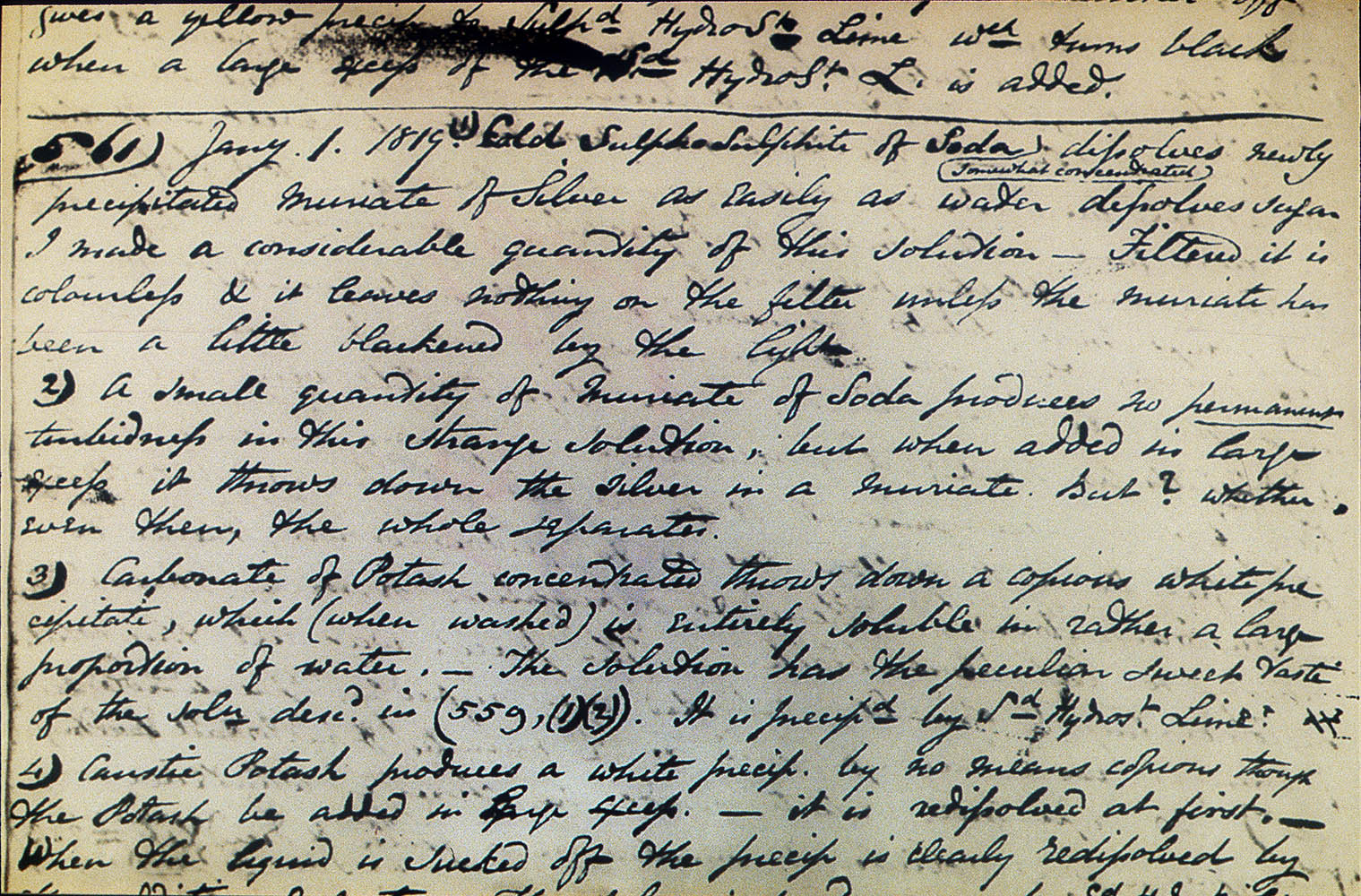 In the course of his experiments in 1819, Herschel observed that hypo dissolved silver chloride as readily as water dissolved sugar. When photography became public two decades later, he immediately recalled this attribute as a mechanism for removing the remaining light-sensitive salts of silver after the exposure was made.  It seems obvious that early photographers would immediately adopt this magic elixir.  Indeed, Daguerre did so, but Talbot followed more reluctantly.

It was the lack of a way to stop the continuing action of light that frustrated Thomas Wedgwood and untold numbers of other potential inventors of photography.  Talbot sensitised his  papers with silver chloride and in 1834 briefly turned to potassium iodide as a fixer.  It converted the remaining silver chloride into relatively insensitive silver iodide.  By the ‘glorious summer’ of 1835 he had made the observation that a strong solution of common table salt, sodium chloride, changed the state of the silver chloride into one fairly insensitive to light.  In early 1839, he found that potassium bromide made a useful conversion into insensitive silver bromide.  Although Herschel alerted him to the properties of hypo by February 1839, Talbot was slow to adopt it, preferring potassium bromide to fix his new calotype negative process at the end of 1840.  By 1842 he had largely accepted Herschel’s hypo for fixing his prints.

Each of these chemicals imparted a characteristic colour to the photographic print or negative:

Sodium chloride yielded a lavender-hued negative or print; potassium iodide stained the paper yellow; and hypo produced a neutral darker brown.  (All of this ‘chemical analysis by colour’ should be taken with a grain of salt – sorry – for it is notoriously imprecise).  Salt, iodide and to some extent bromide all stabilised the photographic material. There were still silver salts remaining but they were forced into a state of minimal light sensitivity.  Hypo acted quite differently, dissolving the silver salts so that they could be washed out completely.  More on that in a minute.  So when Herschel freely offered his hypo fixer early in 1839, why didn’t Talbot jump on it? 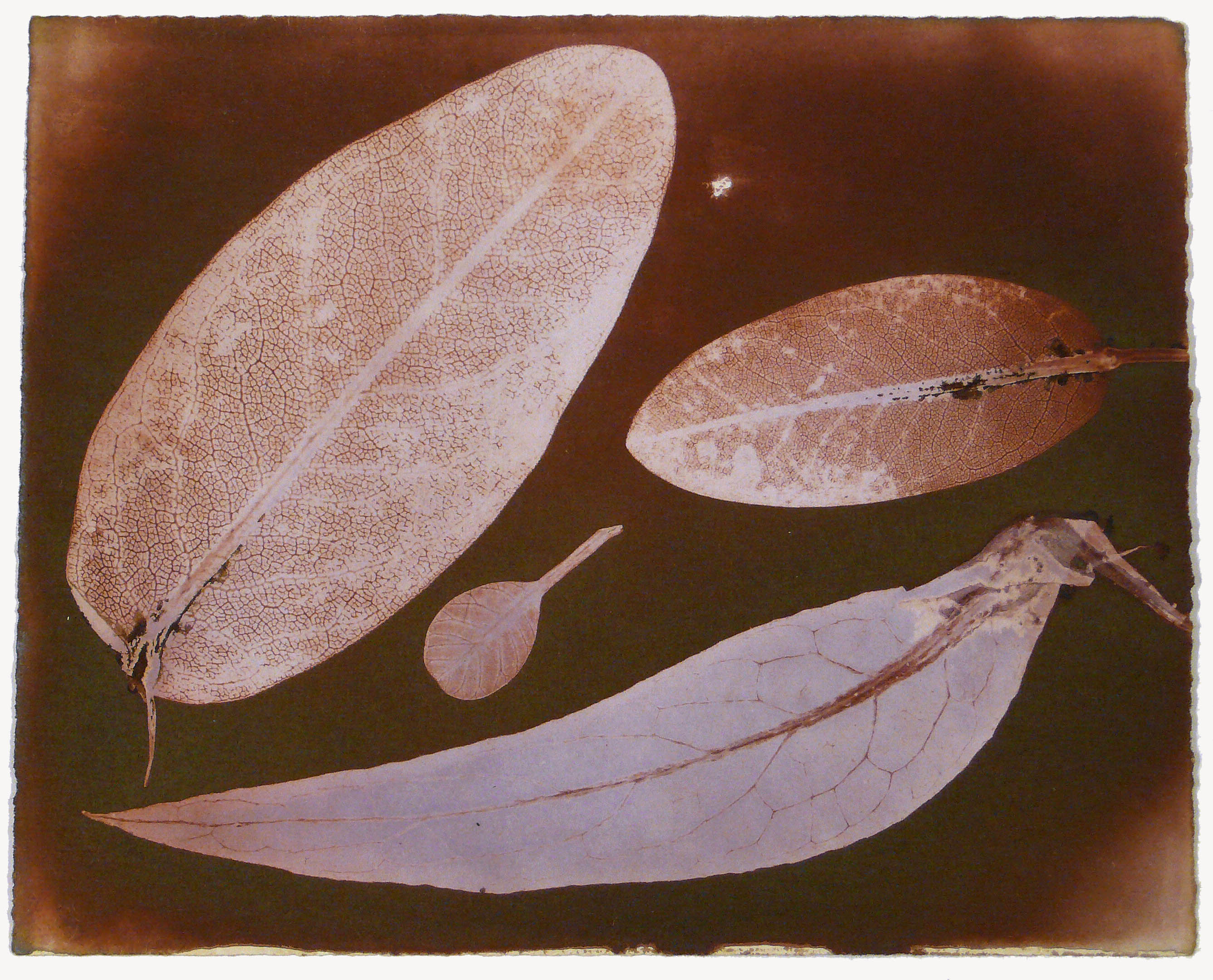 Aren’t these four leaves gorgeous? This photogenic drawing negative was not by Talbot, rather being made by his friend Sir John Herschel on 19 April 1839.  More surprisingly, Herschel chose not to fix it with hypo; indeed, it was not fixed with anything that we normally regard as a chemical.  It was made permanent simply through the use of very pure water.  Yet it has lasted 177 years so far – how many digital pictures can we expect to survive even 177 months?  Herschel had discussed water-fixing with Talbot right from the beginning, but had found it unreliable.  However, on 22 April he wrote to Talbot that  he now “understood the whole affair, and on trying pure water (Snow-water at least, having no means of distilling) the success was complete. The fixation is complete – the picture perfectly uninjured red and unaltered in colour.”  This approach required a very careful control of any halides that might affect the nature of the light sensitive silver salts; however impractical, it dramatically illustrates that hypo was not an essential ingredient for long-term success. 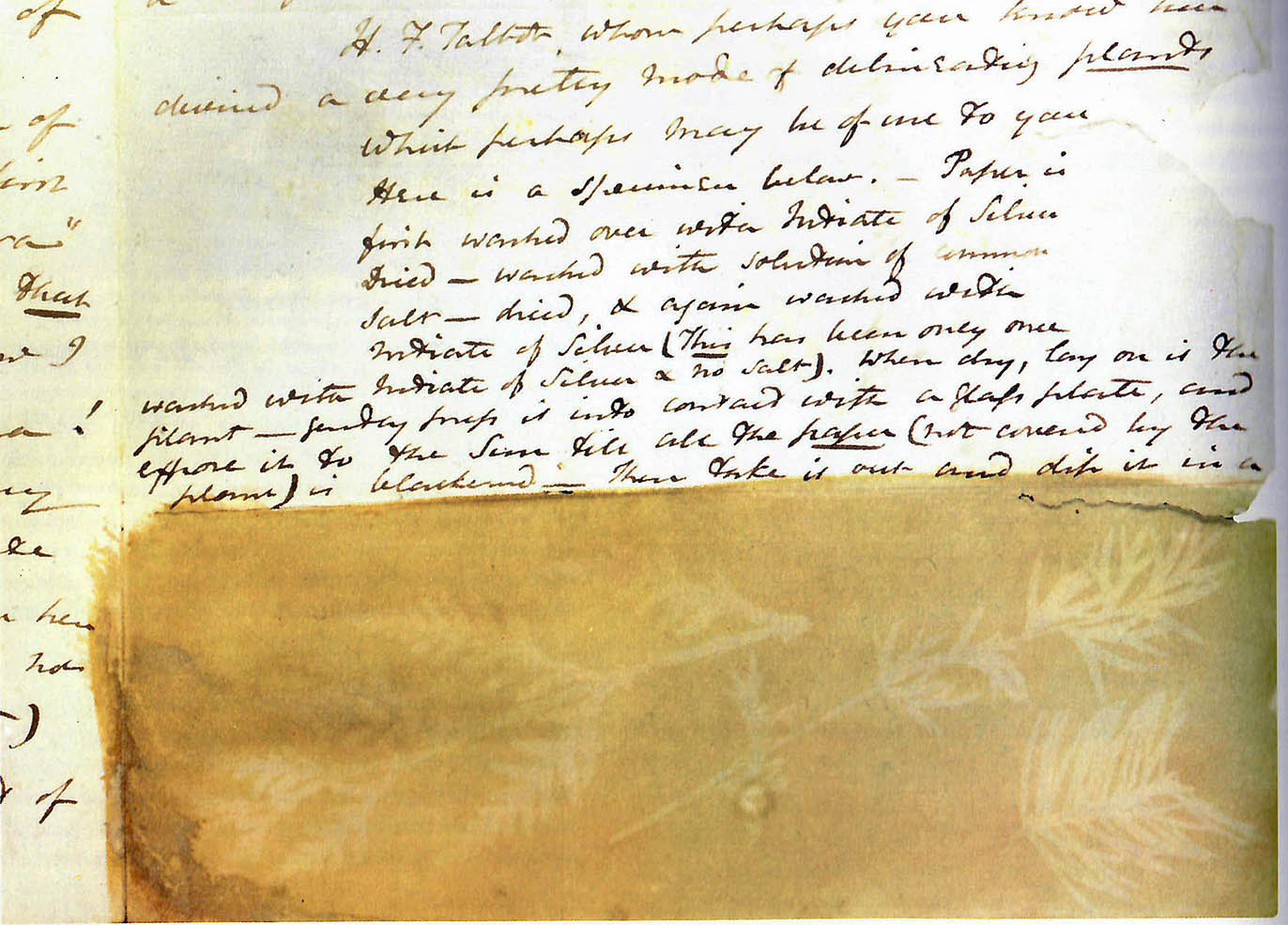 It seems logical that hypo would have been adopted immediately and universally, but the question of fixing is a very complex one and the use of hypo, especially at the time, was highly problematic. Herschel had good reasons to be skeptical of hypo himself.  It was a difficult chemical to compound and scarcely produced.  Herschel  sent a letter to his botanical friend William Harvey at the Cape of Good Hope on 6 April 1839.  In order to avoid extra postage (and possibly pilferage) he produced a photogenic drawing negative directly on the sheet of his letter paper.  He did not fix it with hypo, for he knew that Harvey would have difficulty obtaining this at the Cape, so instead he turned to Talbot’s table salt fixer.  I haven’t seen it for a couple of decades now, but I suspect that it is still the same, and clearly the approach was effective.

Even more importantly for Herschel and Talbot, hypo was a very fickle friend.  Used too weak it would leave behind light sensitive salts.  Used too strong, or not thoroughly washed out, it would deposit sulphur compounds within the fibers of the paper, ultimately dooming the print to a short and unhappy life.  The quality of what was obtained from individual chemists was erratic.  In 1844, Nicolaas Henneman (with his characteristic phonetic spelling) wrote to Talbot: “I think the brown tint is the result of the Hypo being made diferent to wath it used to be when it was 12 Shilling … for ever sints the hypo became cheaper I never get such dark grounds.”  As shocking as it might be to modern sensibilities, the tongue was commonly used as an analytical instrument and properly compounded hypo had a characteristically sweet taste.

There is an irony in our use of terminology here.  In 1839, Talbot was very careful to refer to his various methods as ‘fixing’ – they operated very much like the fixative one puts on chalk drawings – the underlying image is still vulnerable but the artist has done something to protect it.  Today we refer to these methods as stabilisation, for they impart a degree of durability to the photographic image, however leaving behind a complex residue of chemistry.  Herschel on the other hand very descriptively called his use of hypo a ‘washing-out’ method.  The hypo permitted the remaining silver salts to be removed completely.  But soon this careful distinction was turned on its head, and Herschel’s approach came to define the meaning of a fixer.

By the time of the production of The Pencil of Nature in 1844, Talbot had fully accepted hypo as the best (or perhaps least-bad) fixer for prints.  But with the ups and downs of temperature, paper composition, hypo concentration and the varying actinic nature of sunlight, there was only so much that he could control.  In his introduction, he explained that although “as far as respects the design…there is some variety in the tint which they present…. These tints, however, might undoubtedly be brought nearer to uniformity, if any great advantage appeared likely to result: but, several persons of taste having been consulted on the point, viz. which tint on the whole deserved a preference, it was found that their opinions offered nothing approaching to unanimity, and therefore, as the process presents us spontaneously with a variety of shades of colour, it was thought best to admit whichever appeared pleasing to the eye, without aiming at an uniformity which is hardly obtainable. And with these brief observations I commend the pictures to the indulgence of the Gentle Reader.”