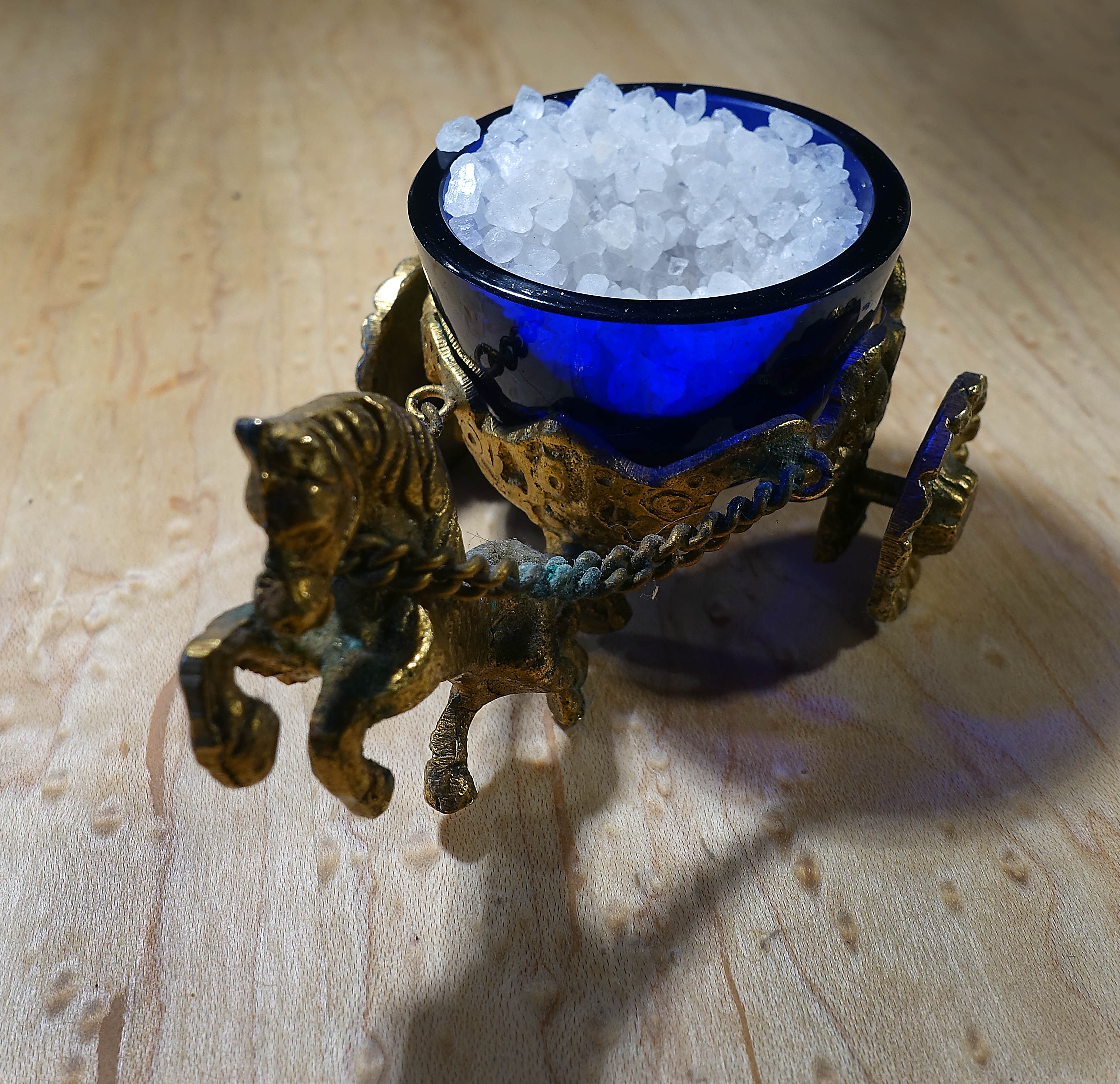 Common table salt – sodium chloride.  Even though some exotic variants are revered by foodies and all forms of it are roundly denounced by certain health enthusiasts, it is such an ordinary and necessary part of our lives that we rarely give it a second thought.  Yet it was a key ingredient in Talbot’s photographic work, ironically both to create the image in the first place and then to make the resulting photograph permanent.

A fortnight ago we examined Talbot’s first paper on photography, Some Account of the Art of Photogenic Drawing, read before the Royal Society of London on 31 January 1839.  Drawn up in response to Daguerre’s surprise announcement in Paris, this came hot on the heals of his first public exhibition of photographs, presented at the Royal Institution in London on 25 January.  Some Account was a sweeping survey of the possibilities of the new art but it contained no technical details.  In the days that followed his exhibition and paper, Henry Talbot was buffeted by conflicting advice and uncertainty about the fate of his years-old research.  Nobody in his circle had actually seen what Daguerre had accomplished and descriptions of the Frenchman’s productions were sketchy at best.  One correspondent to The Morning Chronicle speculated in this period that “M. Daguerre has discovered some dark material, which the reflection of the solar rays bleaches, so that what ought to remain shade, remains shade, and what ought to become light becomes light.”  Such speculation was not an unlikely interpretation of the pithy written descriptions of the daguerreotype that were circulating in the early days but of course would prove to be far from the reality of mercury on silverplate. The true value of Talbot creating a negative from which multiple prints could be made had yet to be recognized, not even fully by Talbot himself. 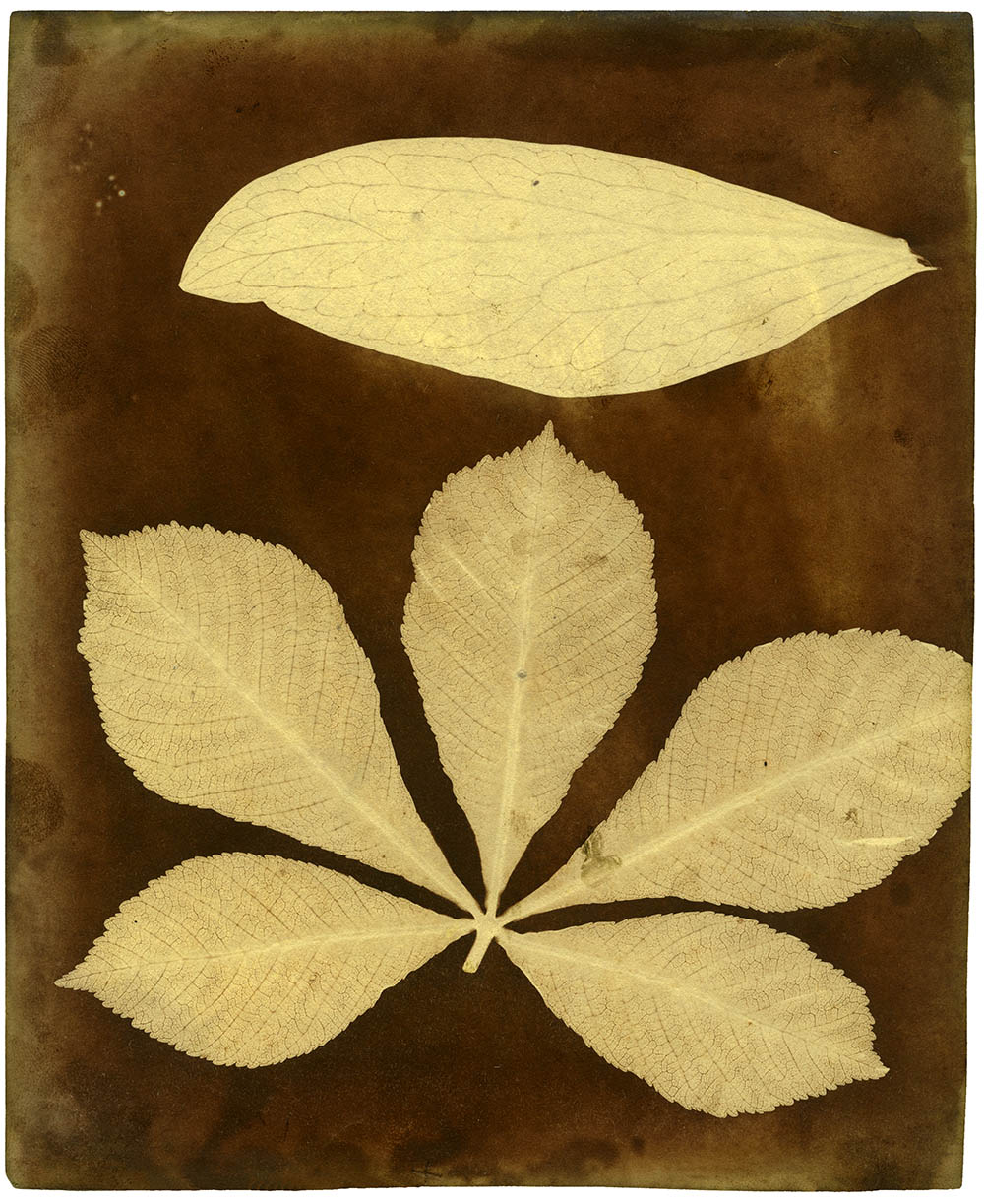 Talbot and his friend Sir John Herschel were already engaged in a lively correspondence about photography and on 20 February Talbot wrote to Herschel lamenting that “the weather both yesterday and today was of the most Antiphotogenic description, in London.”  In spite of this handicap, he informed Herschel that “if there is a meeting of the R. Socy tomorrow, I intend to request Mr Christie to read a note, briefly mentioning the nature of my processes; which will then be free to all the world to adopt, or to find out better ones for themselves.”  And that is what he did. 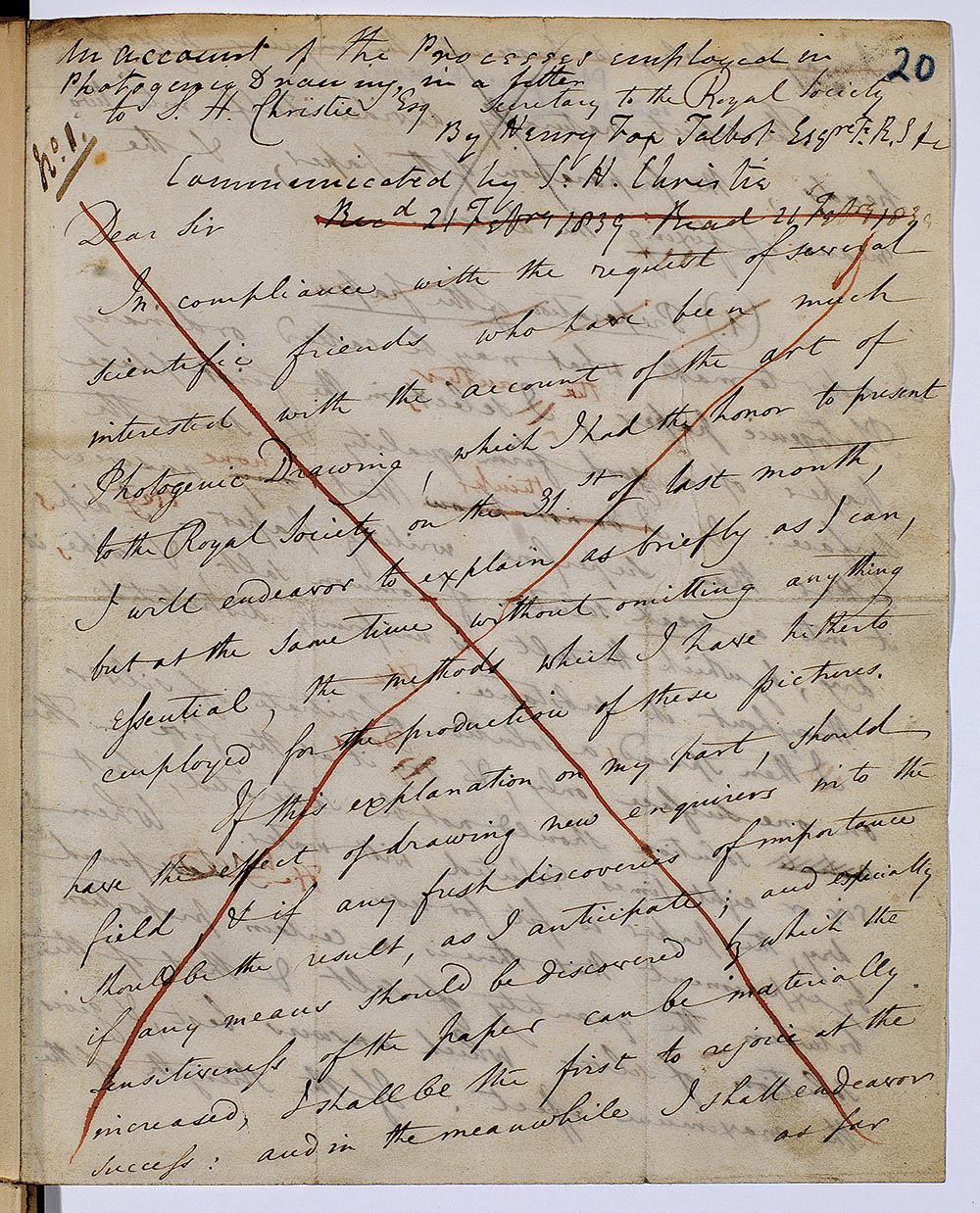 Samuel Hunter Christie was the Secretary of the Royal Society but this meeting was chaired by their Vice President, John George Children, the father of Anna Atkins. A widower, he lived with her and her husband and they were very close and intellectually supportive  One can imagine that he rushed home that evening to have a conversation with Anna about the details of the new art.  Herschel again was influential, for Atkins was to adopt his cyanotype process for her publications, but the inspiration and later the tutelage of Talbot was critical. 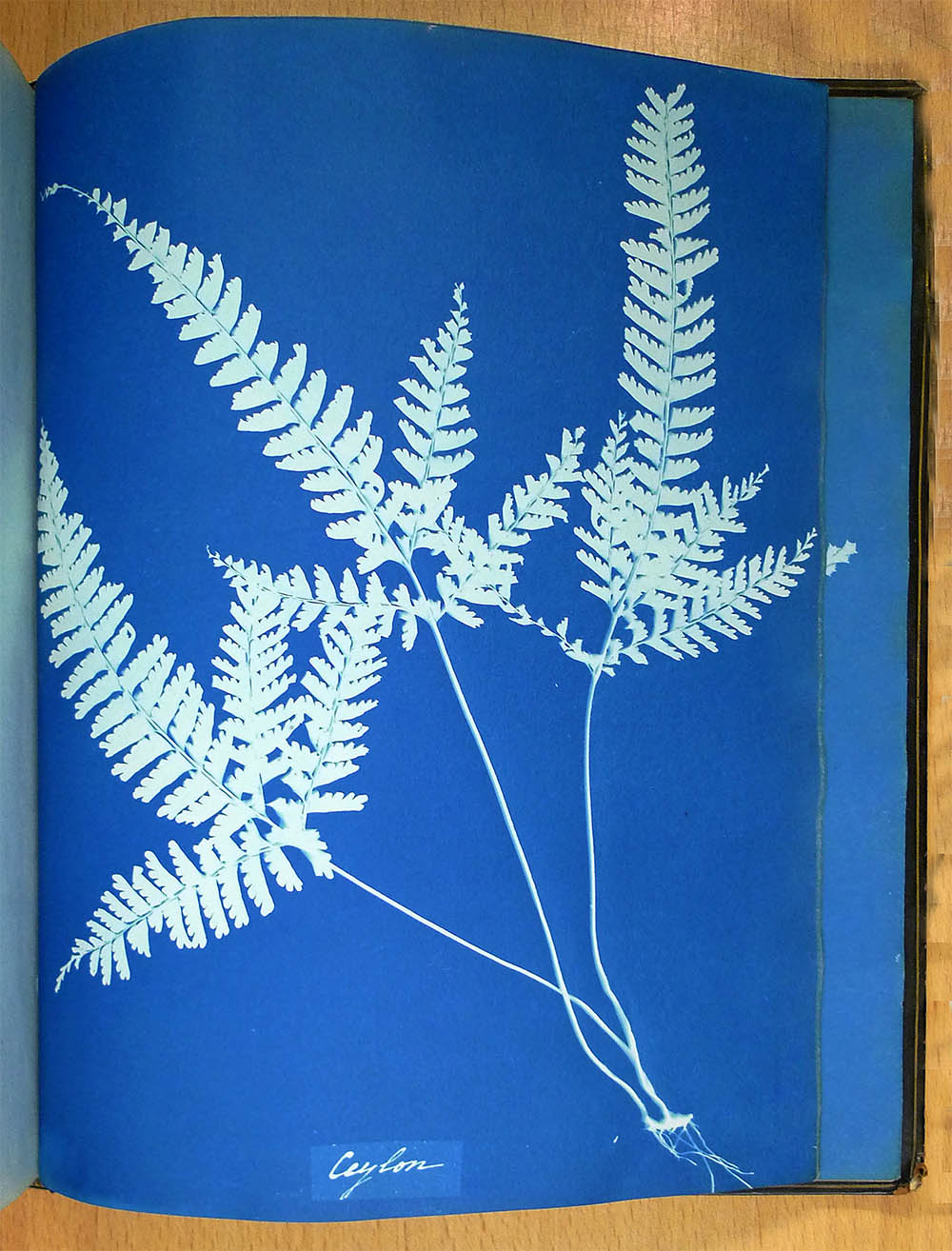 In this paper, Talbot explained  that “in compliance with the request of several scientific friends, who have been much interested with the account of the art of Photogenic Drawing, which I had the honour of presenting to the Royal Society on the 31st of last month, I will endeavour to explain, as briefly I can, but at the same time without omitting anything essential, the methods which I have hitherto employed for the production of these pictures. If this explanation … should have the effect of drawing new inquirers into the field, and if any new discoveries of importance should be the result, as I anticipate, and especially if any means should be discovered by which the sensitiveness of the paper can be materially increased, I shall be the first to rejoice at the success.”  Talbot split his explanation into two ‘natural’ divisions, the preparation of the paper and fixing the images to make them permanent.  He didn’t give specific quantities or concentrations of chemicals, instead more broadly explaining that he had “found, by experiment, that there is a certain proportion between the quantity of salt and that of the solution of silver, which answers best and gives the maximum effect.’  That balance, in fact, was an exquisite one, a ratio so critical that Dr Mike Ware has christened it “The Goldilocks Effect.”  As to fixing, while Talbot had initially used potassium iodide, he had long since turned to the same table salt that sensitized the paper in the first place. He found it to be “simpler, or at least requiring less nicety. It consists in immersing the picture in a strong solution of common salt, and then wiping off the superfluous moisture, and drying it. It is sufficiently singular that the same substance which is so useful in giving sensibility to the paper, should also be capable, under other circumstances, of destroying it; but such is, nevertheless, the fact.”

The essential core of Talbot’s secret was out in the open, free for anyone to test.  I believe that the lack of specifics in this first communication stemmed largely from Talbot’s rapidly evolving understanding of how the process was best worked.  Dr Mike Ware has outlined at least 32 distinct combinations of sensitizer and fixer that Talbot tried for photogenic drawing and undoubtedly there were many more.  It would not be until August that Daguerre revealed his manipulatory secrets, so for half a year in 1839 the only process that people were free to test out and expand upon was Talbot’s method. We don’t know how many took this information and immediately tried to make photogenic drawings themselves, but surely they were numerous and now largely unknown. Creating this magic was relatively simple and could be approached in various ways.  Others started to commercialize it almost immediately, entrepreneurs such as William West who made demonstrations and sold prepared papers.

William Jerdan, the Editor of the Literary Gazette, was impressed by Talbot’s willingness to share his information and to draw others into the field of study. Jerdan didn’t have to work with only a written description.  In spite of the nasty weather that Talbot complained about to Herschel, he was able to make a contact negative to show Jerdan . 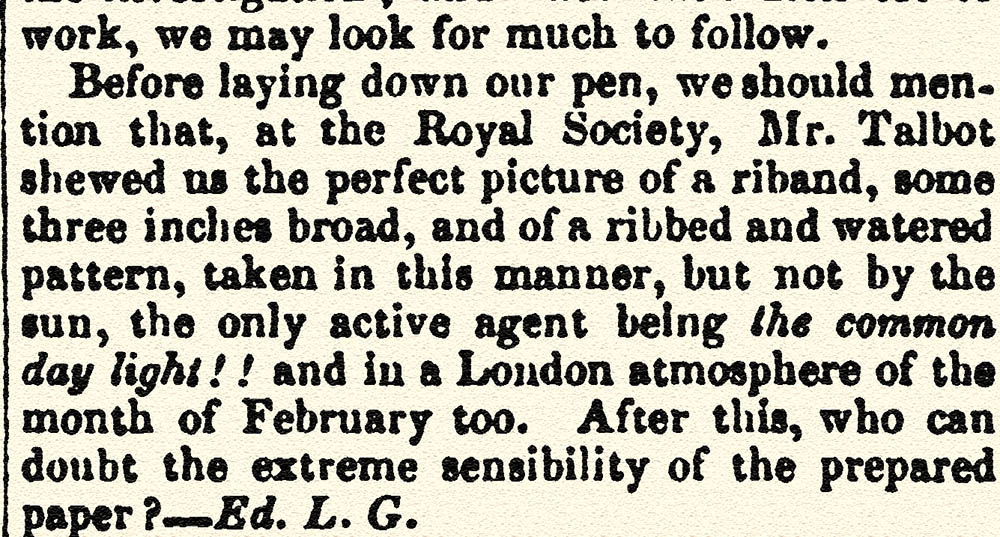 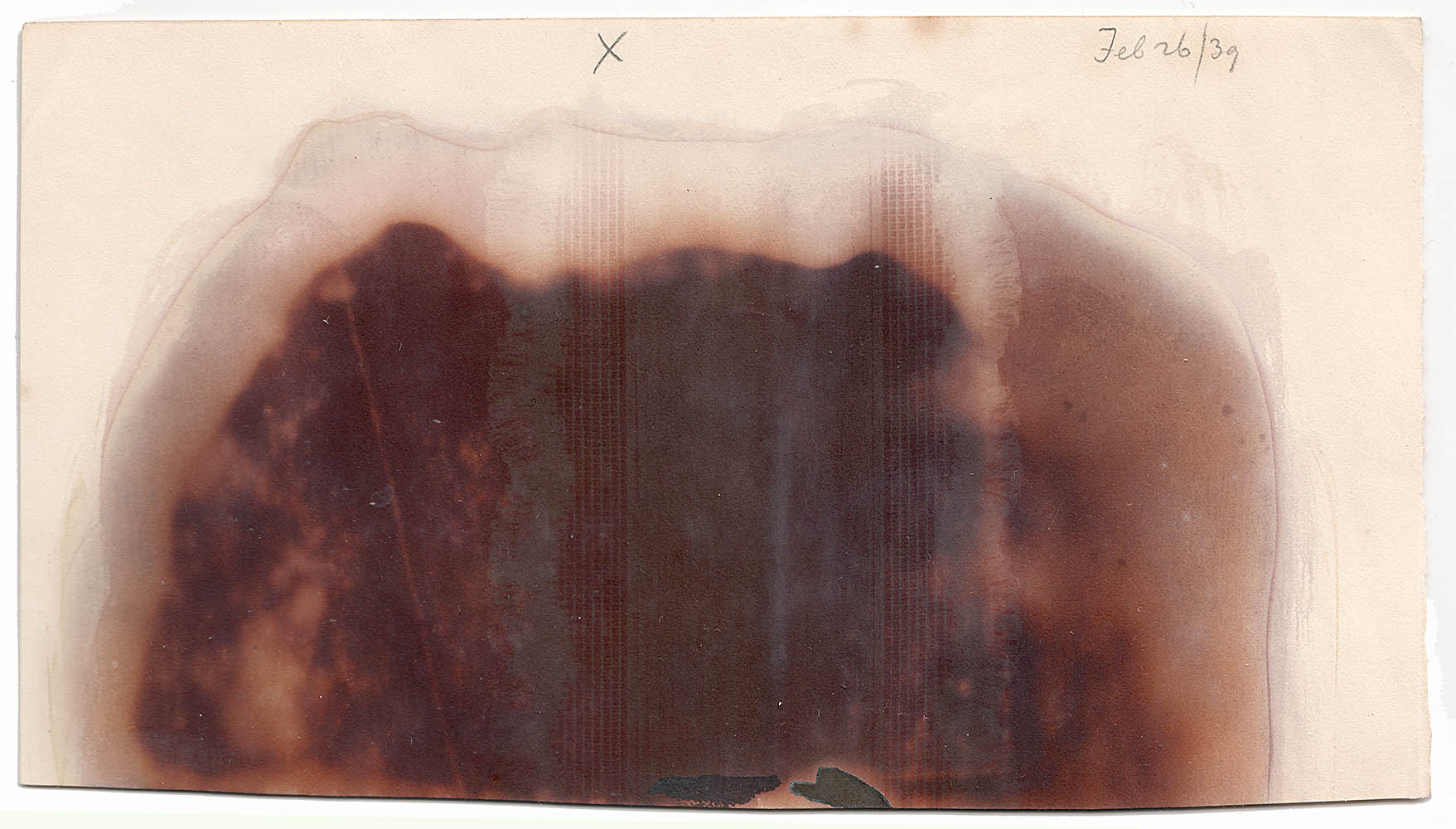 Give your eyes a moment and you will detect the vertical parallel lines of the ribbon extraordinarily still visible in this negative.  I haven’t located the exact one that Talbot showed to William Jerdan prior to the 23 January publication – it very likely died an early death from an excess of admiration –  but as you can see from Talbot’s inscription on the above, this riband was made by him just three days later and must have been very similar, probably from the same scrap of ribbon. Given the paucity of sunlight, did Talbot cut this precious example in half in order to give part to his visitor, reserving the other part for himself? Or, as I think more likely, was this artefact sampled by Eugene Ostroff in his 1960s experiments? Has conservation science advanced to the point where we can distinguish a 19th c. paper cut from a 20th c. one?

It was a busy time for Talbot, not only because of Daguerre, but also his third daughter had been born on 25 February.  Henry Talbot remained in London throughout this period and that is undoubtedly where this example was produced. 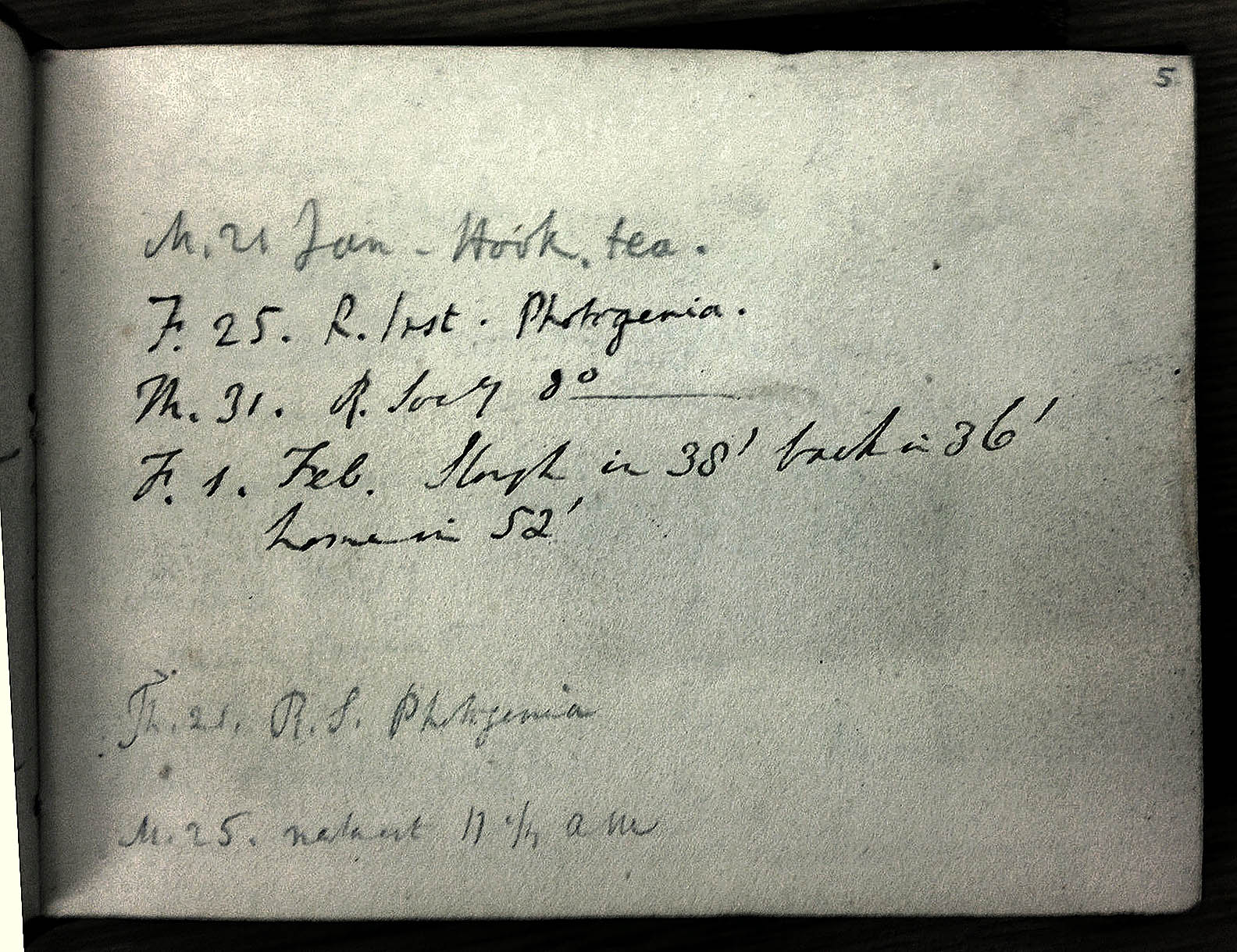 Did Talbot make this ribbon on 26 February as a demonstration for someone?  His pocket diary lists his 25 January exhibition at the Royal Institution, as well as his 31 January Royal Society paper and the 21 February reading of the present paper.  Curiously he recorded two of these under the term ‘Photogenia’.  On the 26th, his cousin Harriot Mundy suggested that the new daughter be named Photogena, but the Talbots settled instead on Matilda Caroline.  Sadly, the next entry in the diary after 21 February is Monday 25th, which had to be March, so at present we don’t know his appointments for more than a month. Perhaps as internet resources become more and more advanced, somebody will publish a diary or set of correspondence from one of Talbot’s contemporaries, revealing more about this period.  If any of the readers of this blog know of experimenters who were inspired by this 21 February paper and acted on Talbot’s freely sharing his working method, or even just discussed it, I would be delighted to open a correspondence with them.