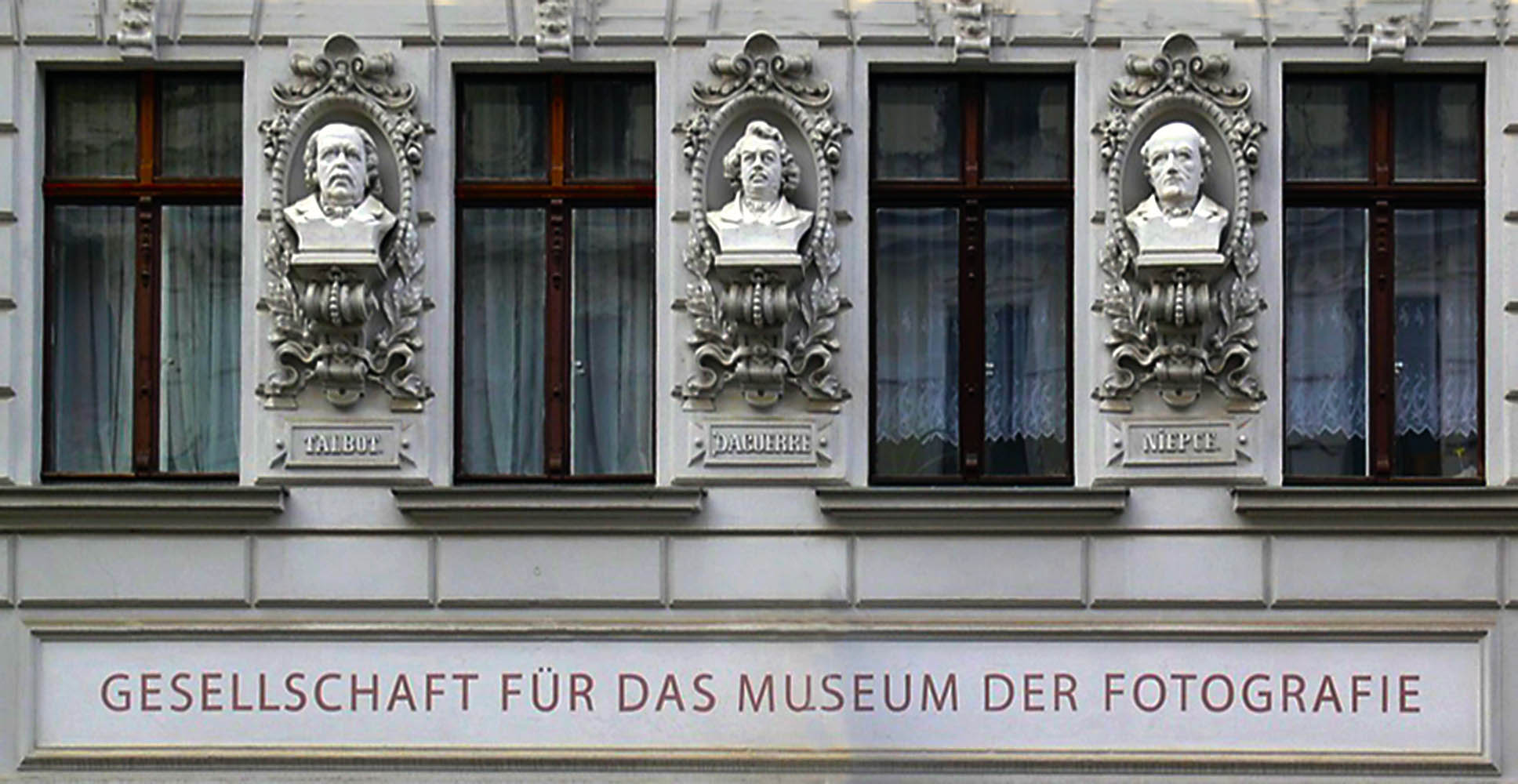 It is frustrating that we don’t really have much in the way of portraits of Henry Talbot.  I’ve been tempted to run a summary of those few images that are known, but they are so widely published that I suspect that many of our readers are familiar with them already.  One would have hoped that his final resting place in the graveyard at Lacock would have been graced by a grand memorial statue, but more in keeping with his own personality it is marked by a simple descriptive stone.  However, over the years a number of busts and other physical manifestations of him have been made.  Sadly, some of these are known to have been lost, such as the portrait in his friend’s Antoine Claudet’s studio that was destroyed in a disastrous fire shortly after the photographer’s death, or the one in the gallery of the Science Museum that seems to have disappeared a century or so ago.  Thus, I was delighted to recently become aware of this survivor in Gōrlitz in the easternmost part of Germany.  Fittingly, Talbot has become a neighbor of  his two contemporaries, Louis Jacques Mandé Daguerre and Joseph Nicéphore Niépce in what are reasonably lifelike looking busts.  There is a statue of Niépce in his home town of Chalon-sur-Saône, and more than one of Daguerre, including the resurrected one outside the Smithsonian Institution in Washington, but Talbot is more rare. 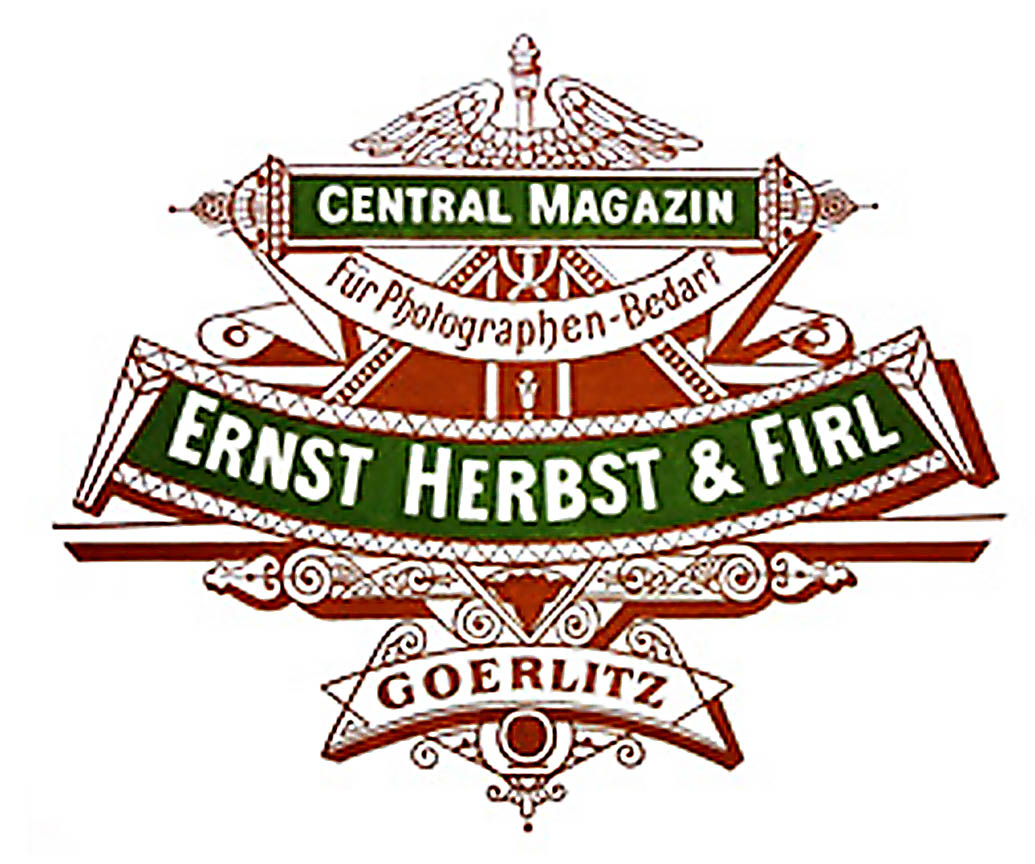 Gōrlitz was once an active manufacturing base for photographic products. Now the home of a museum for photography and the base of a camera club, from 1893-1916 the building was the home of Ernst Herbst & Firl, a prolific manufacturer of wooden studio and travel cameras.

Do you know of any other memorials to Talbot similar to this?  Perhaps one lies largely unnoticed in an old photographic studio?  It would be great to see snapshots of others anywhere in the world. 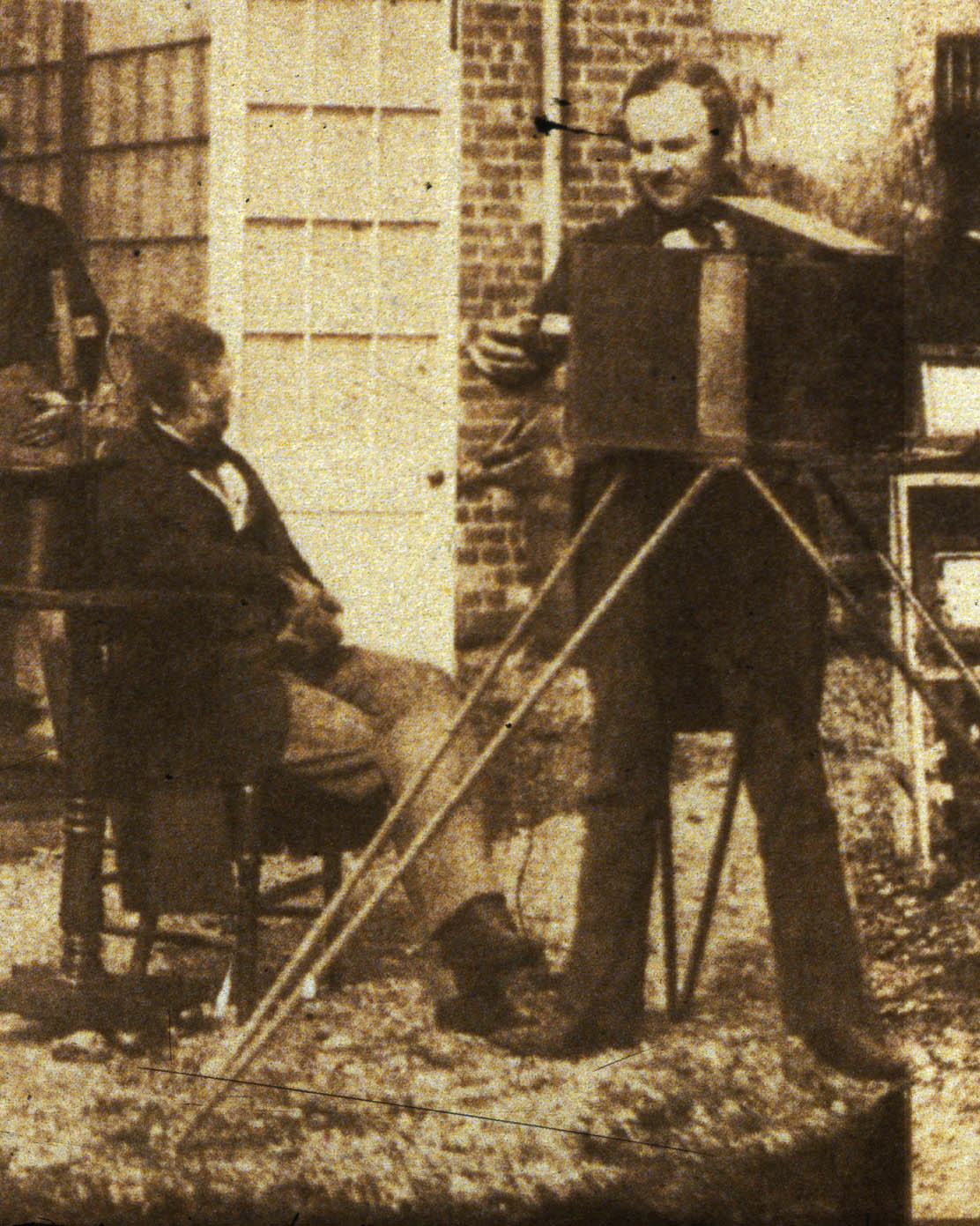 One of the best portraits that we might have of Talbot is the central figure in the sweeping panorama of Henneman’s Reading Establishment, a two-part tableaux vivant that I believe was orchestrated by Benjamin Cowderoy in 1846.  At least the field has customarily believed that the awkward portraitist is Talbot – it does resemble him and it would be an appropriate role – but there is no documentary evidence of this identification. In any case, it has now become embodied in a physical fact. In 1993 Greta Berlin was commissioned to make a bronze interpretation of the portrait – her maquette is preserved in the Fox Talbot Museum on the grounds of Lacock Abbey. 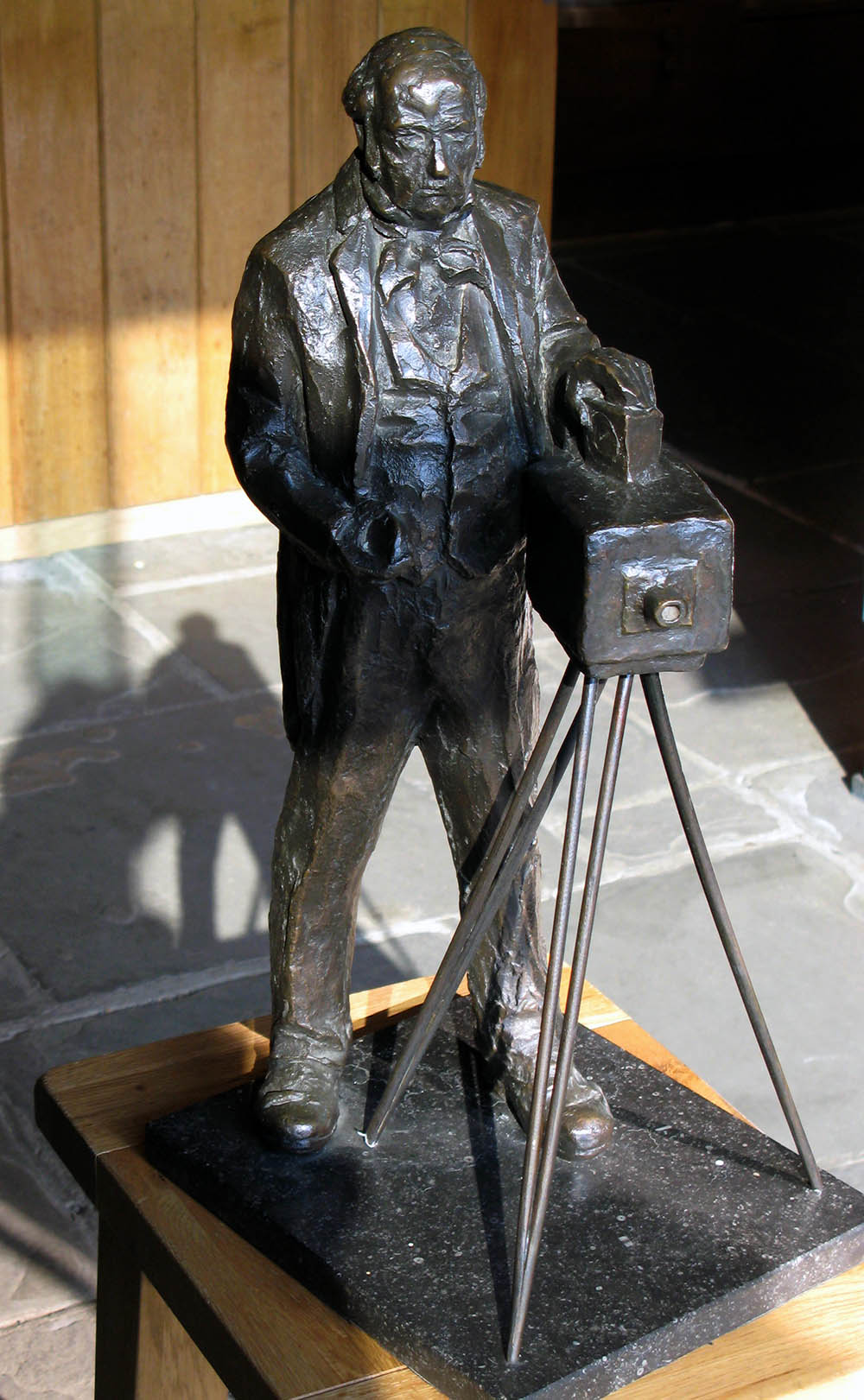 The commission was created by the builders of a new industrial park in Chippenham, the market town about three miles from Lacock Abbey and the bronze is now installed on their grounds. 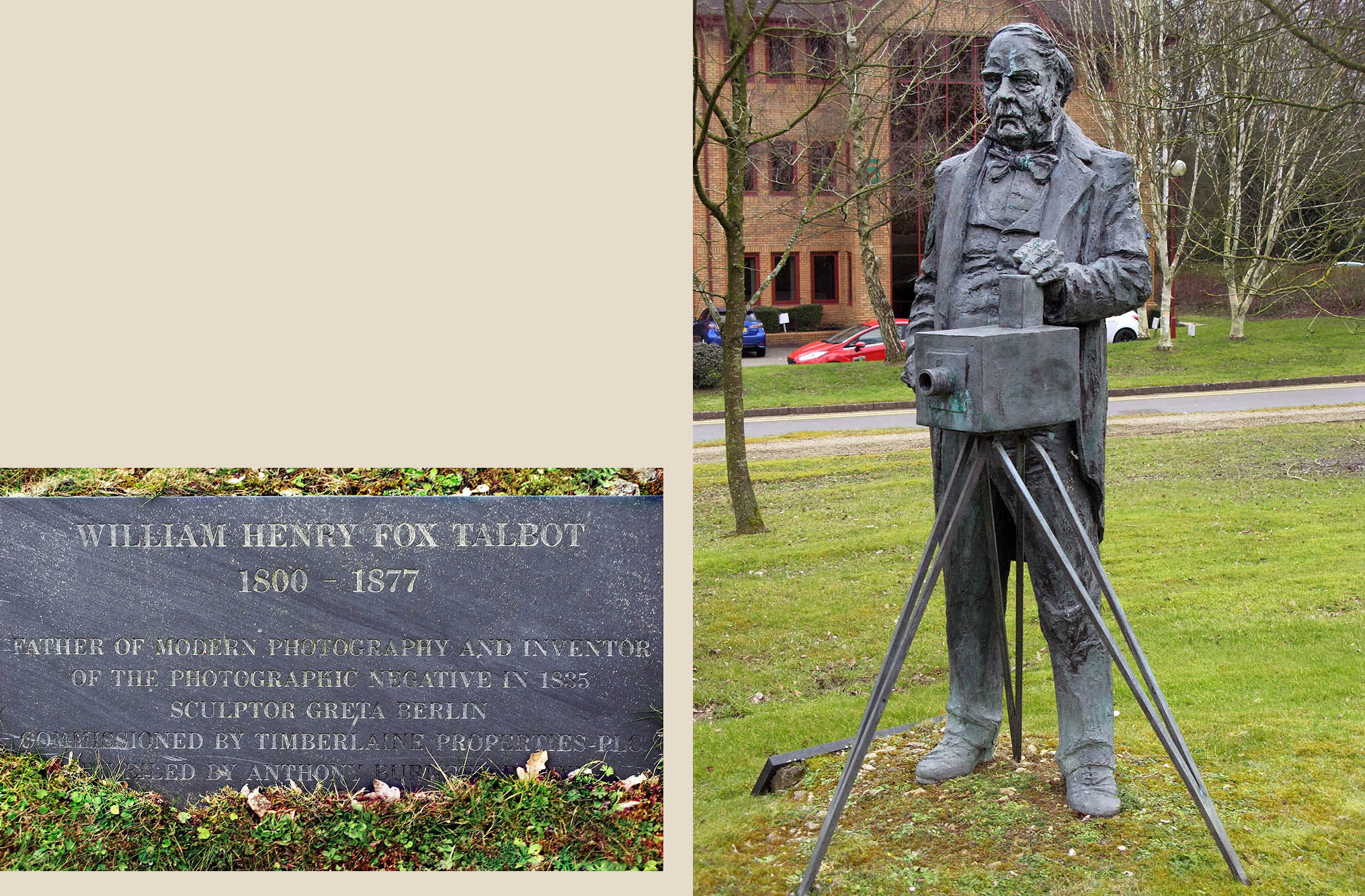 The artist has taken the appropriate licenses in re-imagining the Reading panorama, respecting Henry’s intellectual stature by making him seven feet tall (more than two metres) and posing him with an appropriate camera, a timer perched on top. 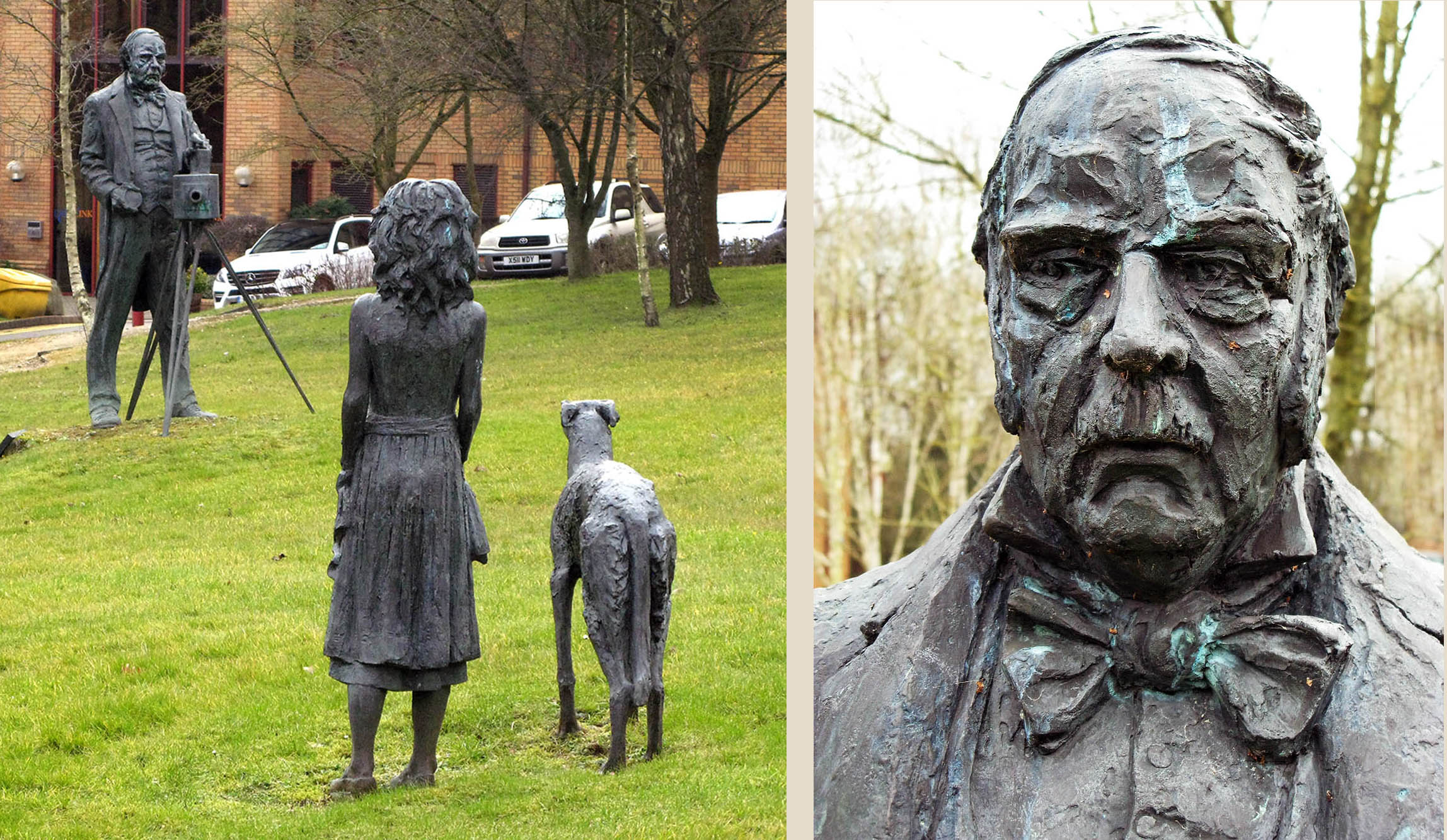 The awkwardly clamped-in victim of the portrait shoot has been replaced by a free-standing confident young lady, while her canine companion watches the photographer with careful alertness.  Henry is perhaps grumpy at having his photographic session interrupted, or perhaps lost deep in thought.  The farfalle appears to be a nod to the cravat so prominent in Claudet’s well-known daguerreotype of Talbot. 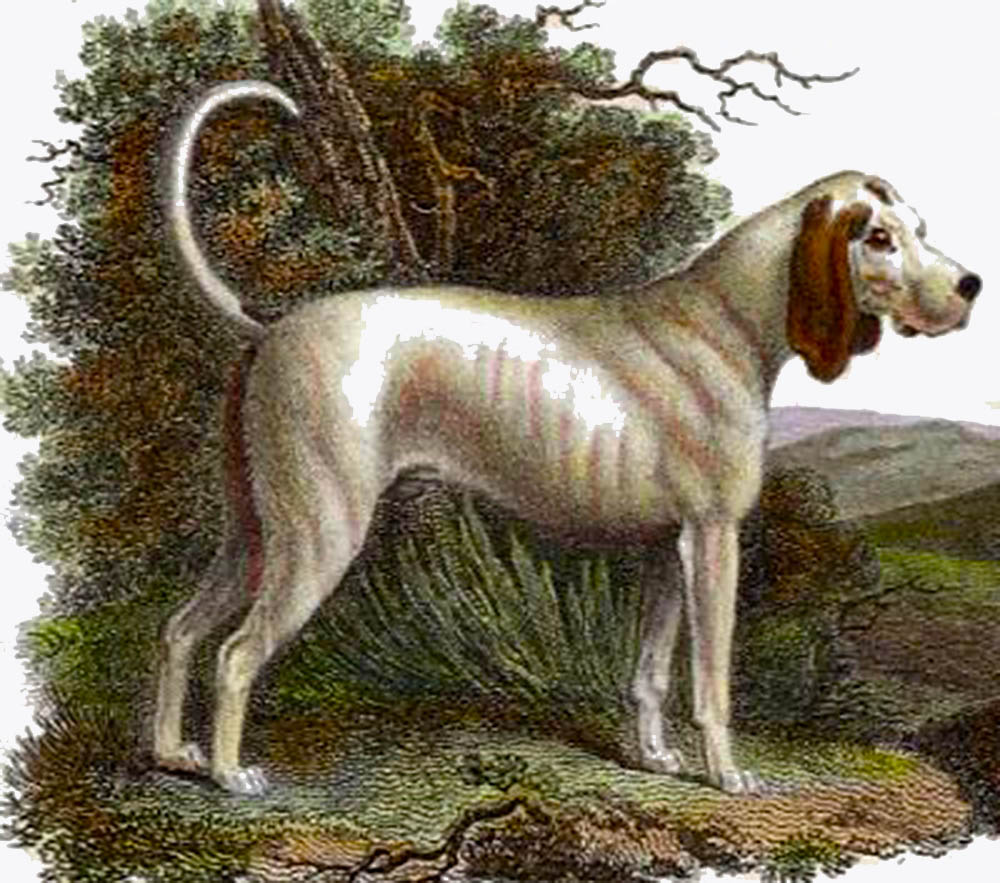 It would have been fitting to have the young woman accompanied by a Talbot, a breed of hunting dog that was already becoming extinct by Henry’s day. It is thought to the predecessor of the modern beagle, a favourite of Talbot’s great-great grandson, the late Anthony Burnett-Brown. However, the bronze seems to be modeled on a greyhound or similar sight dog, perhaps one of the family dogs who had the run of Lacock Abbey in the 1990s.

There is one memorial to Talbot that I have not seen but continue to hope may have survived.  In 1921, the President of the Royal Photographic Society,  Dr G. H. Rodman, made an appeal in the Times for a memorial to Talbot, recognising Miss Matilda Talbot’s recent donation of apparatus and photographs to the Society’s Museum.  Money was raised by subscription from appreciative photographers and in September 1924 the bronze and marble sculpture was unveiled in their Library at the headquarters in 35, Russell Square in London. 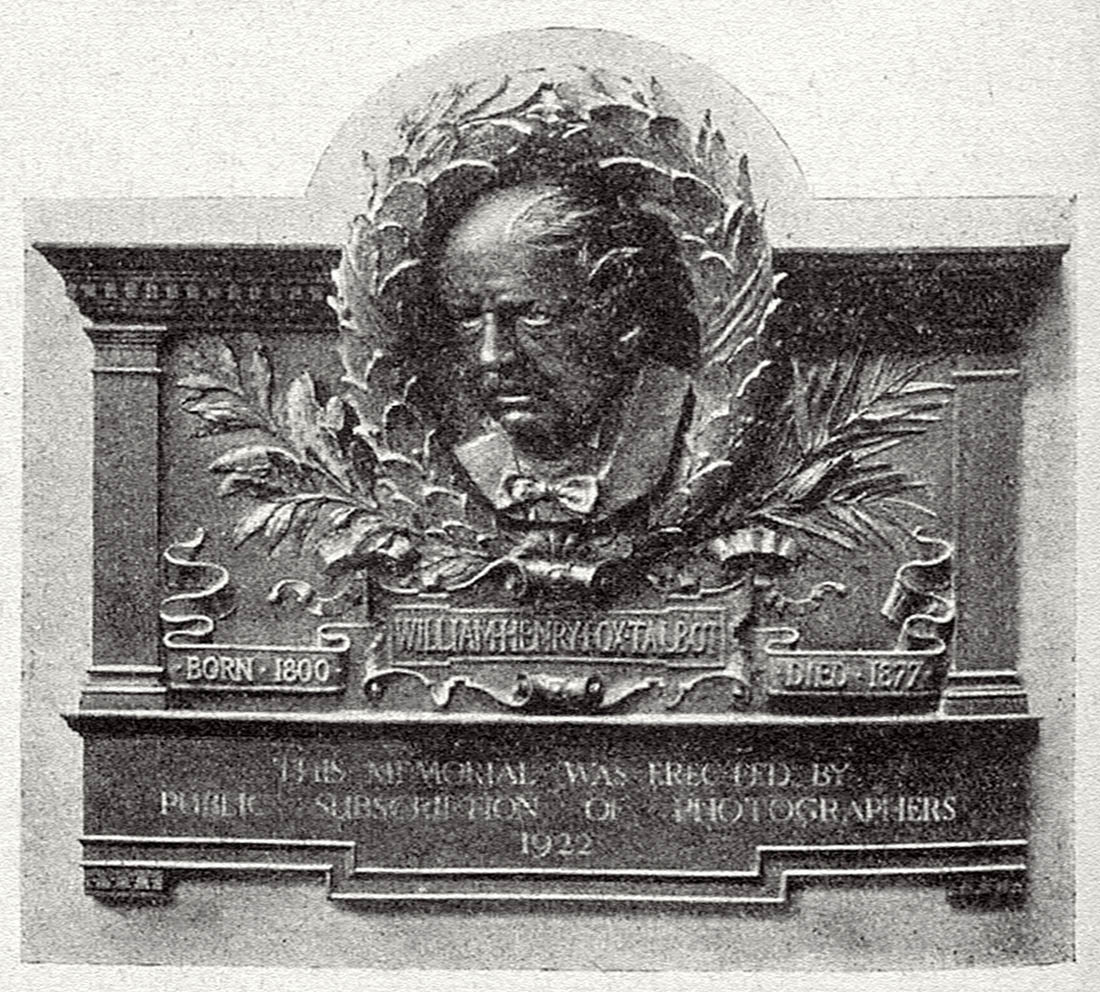 The sculptor was George Hawkings (1863-1937), a man of wide-ranging talents.  He had been a journalist and an inventor in his youth and just after WWI as the President of the Hampshire House Photographic Society he spearheaded the invitation of lady members.  Hawking took the photograph above of his own work but I have not been able to trace an original print – this is from the pages of the British Journal of Photography. 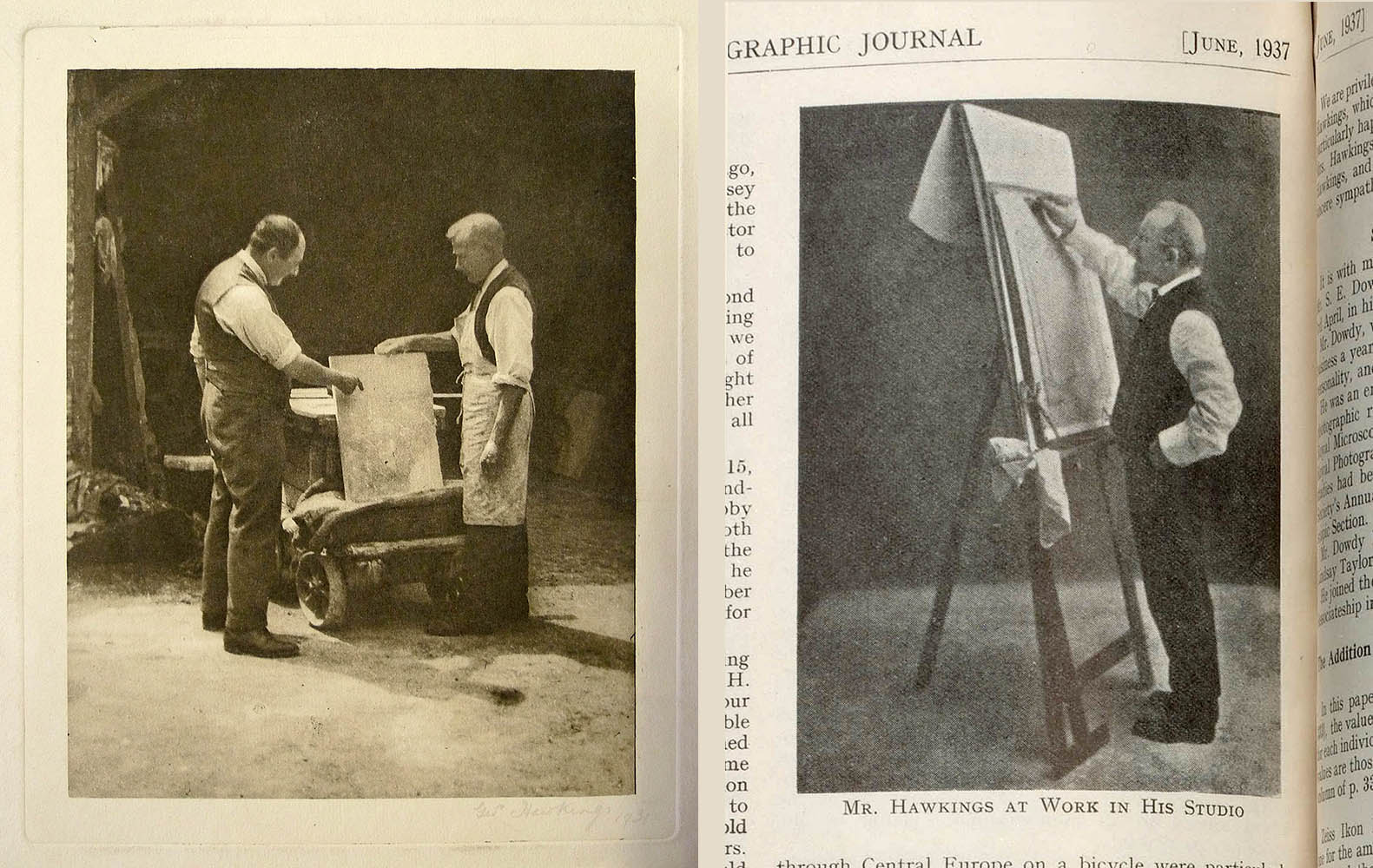 On the left is a 1931 photogravure by Hawkings, taken in his own studio and showing his son examining what appears to be a stone slab with a workman.  On the right is Hawkings himself, possibly a self portrait, illustrating his rather full obituary in the 1937 Photographic Journal.  Very little of what must have been a prodigious output by him is known to have survived and anyone who knows of any archival material or descendants is encouraged to get in touch.

In 1938, right on the eve  of WWII, the Society found its Russell Square premises to be not only too cramped but also threatened by development in the area.  After some fundraising and much study, they moved to much more commodious quarters at No. 16, Princess Gate in London. 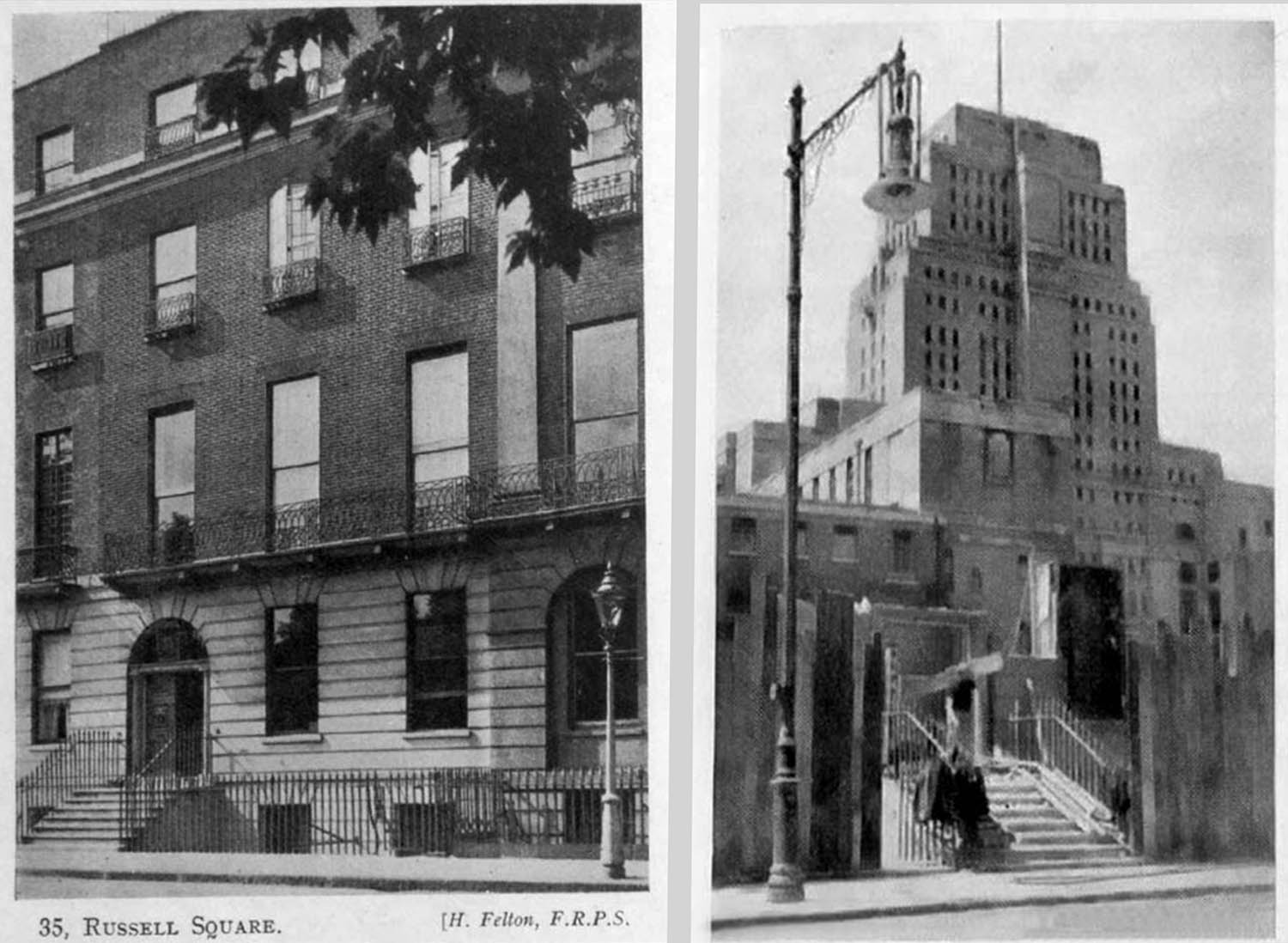 In the summer of 1939, their old Russell Square premises were demolished, with the British Journal of Photography illustrating the total loss.  Curiously, I have not been able to find any reference in the published record or in RPS documents as to the fate of the memorial.  Surely they would not simply have left the memorial behind to become a victim of the demolition.  And it seems unlikely that they would have disposed of it as scrap metal in the wartime drives, especially since Miss Matilda Talbot herself was a featured speaker in the centennial celebrations of the magic year of 1839. The Society remained at Princes Gate until their move in the late 1970s to Bath.  I’m rather certain that I didn’t know about the memorial during my visits to Princes Gate in the 1970s and laterally the staff was fully engaged in the move.  The late Valerie Lloyd, Curator of the collection was a good friend and knew of my budding interest in Talbot – I’m sure that she would have shown me the memorial during some visit.  Nobody seems to remember seeing it there.  I recently called on the former premises, now a commercial property, and while the current owners did not encourage a search the inner and upper rooms and had never heard of Talbot, they assured me that there was no such bronze tucked into a wall somewhere. 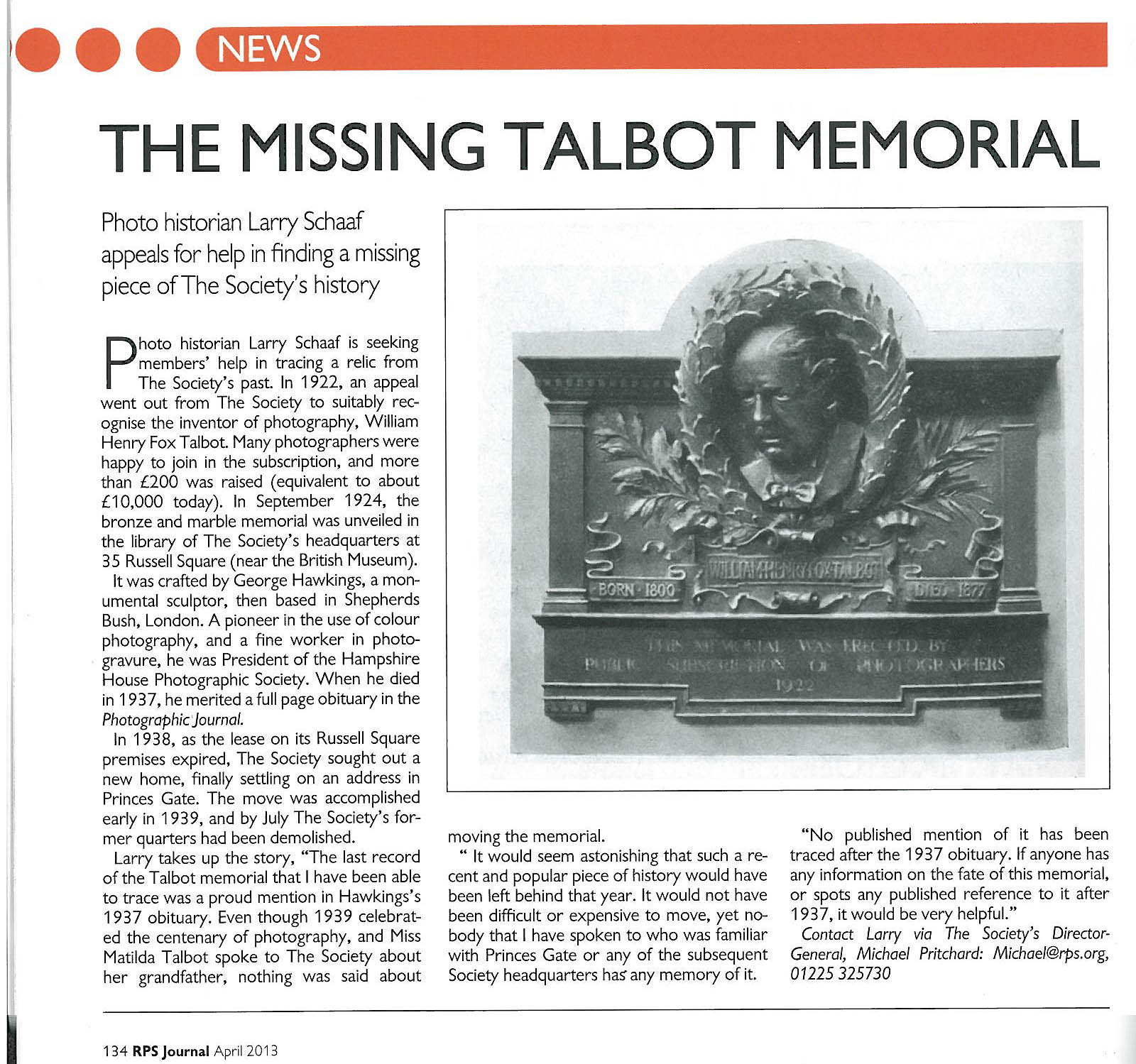 In March 2013 Michael Pritchard ran an appeal on his website, British Photographic History (a vital international resource and information exchange, by the way, if you are not already a subscriber).  In addition, in his role as Director General of the Royal Photographic Society Michael also saw to it that an appeal was published in the RPS Journal the following month. We had hoped that this publicity would reach one of the older RPS Fellows, or perhaps the custodian of one of their estates, and would shed some light on the fate of this memorial.  Surely one of the Fellows or photographic visitors to the RPS headquarters would have at least taken a photograph of it?  Please allow me to renew the appeal: if you know anything at all about this memorial – perhaps a letter in a family archive or a snapshot of it in a family album – or even better if you could tell me that it was salvaged and has been hidden in an attic all these years, I would very much like to hear from you.

Questions or Comments? Please feel encouraged to contact Prof Schaaf directly at larry.schaaf@bodleian.ox.ac.uk • Attributed to Benjamin Cowderoy, (detail) Panorama of the Reading Establishment, 1846, salt print from a calotype negative, Private Collection, Schaaf 1595 .  • Thanks to Roger, Watson, Curator of the Fox Talbot Museum at Lacock Abbey, for supplying the images of Berlin’s maquette and statue.  • George Hawkings, Photograph of His Memorial to WHFT, published in The British Journal of Photography, 12 September 1924, p. 558.  •  George Hawkings, Son and a Workman, photogravure, 1931, the Hammersmith Archives; the portrait of Hawkings was published in The Photographic Journal, June 1937, p. 520. • H. Felton, The RPS at 35, Russell Square at the time the memorial was erected, reproduced from The Photographic Journal, October 1924, p. 424; unknown photographer, The Demolition of 35, Russell Square, reproduced from The British Journal of Photography, July 1939, p. 431. •   The RPS Journal is being digitised and is now freely available online for the years 1853-2012 and although the above article has yet to be added, this is an invaluable resource for research into photographic history.