Today happens to be Good Friday, but the date of this observance in advance of Easter varies greatly from year to year.  In Talbot’s main photographic years of 1839-1845, Easter fell between 23 March and 19 April, and while I don’t believe that he ever photographed on the holiday itself, the temptations of the strengthening  sunlight in early Spring were difficult to resist.  Earlier this week, on 21 March (in 1840), Talbot suddenly went on a productive streak, probably encouraged by the fine weather.  Whereas 1839 had been one of the stormiest and wettest years on record, the opposite was true in 1840 with March and April being unusually dry months.  In this early period Talbot maintained a list of his negatives, and the 21st was a very good day indeed.

I’ve not been able to trace all of the photographs in Talbot’s negative lists – some of the descriptions (such as ‘bust’) are too vague and inevitably some originals must not have survived.  Happily though, all four of the productions from this particular day can be identified. 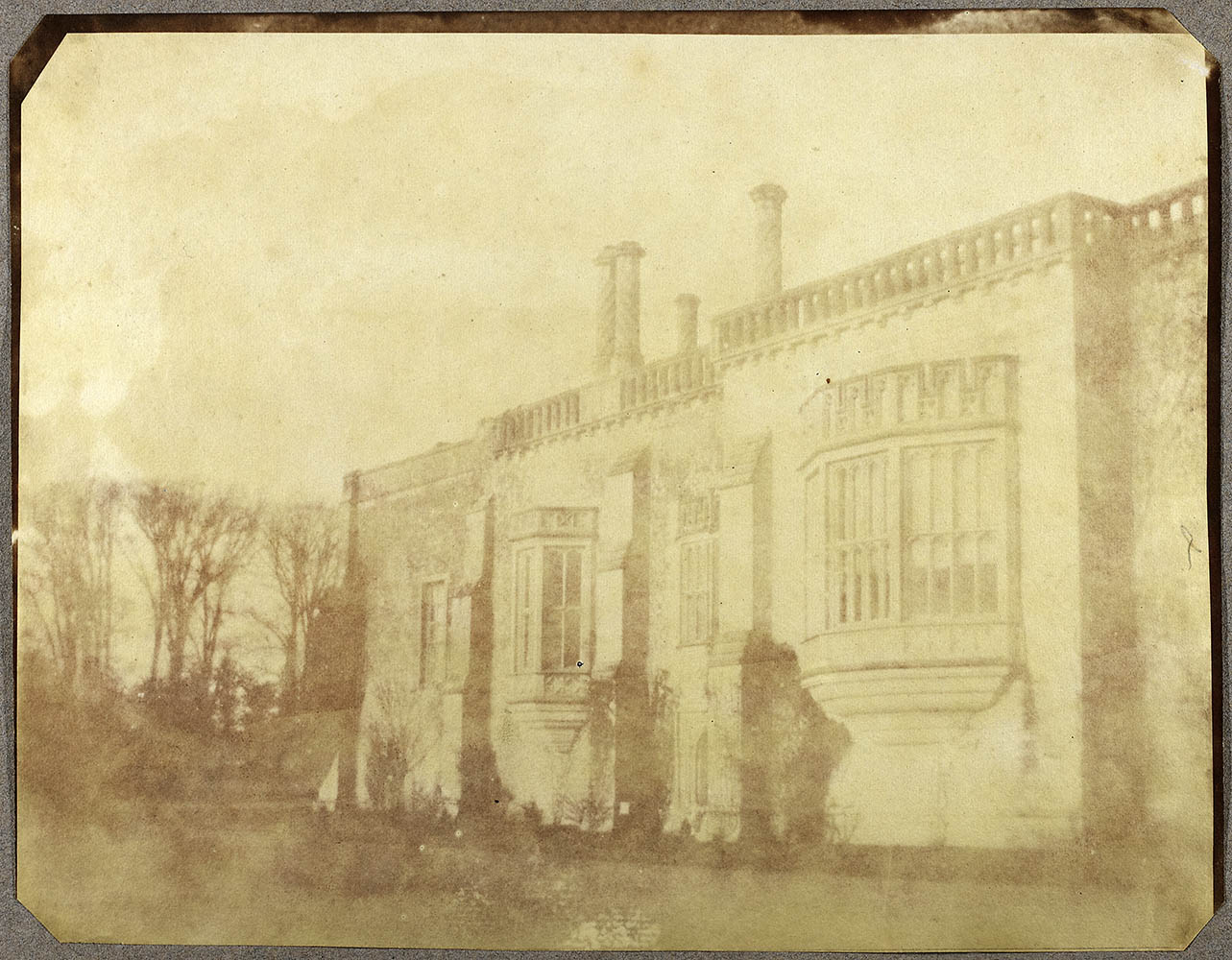 The South front of Lacock Abbey with its famous oriel window was a continuing subject for Talbot.  Most of his views were taken looking towards the Southeast, incorporating the distinctive Sharington’s Tower, but ones with the camera pointing towards the West much less common.  Here the oriel window stands proud in the middle of the scene – the front entrance of the Abbey is just around the corner to the right.  The shadows indicate that the sun is near setting at the end of the day, establishing that the order of the pictures in the negative list did not correspond to the sequence of when they were taken that particular day.  It was not the order in which he happened to develop them either, for these were all taken half a year before Talbot discovered his calotype negative process.  They were all photogenic drawing negatives where the image appeared directly in the camera solely from the action of solar energy.  Perhaps the listing order was random, perhaps they were in some sort of qualitative or other sequence known only to Henry.  This particular print was preserved in one of Talbot’s personal albums, but a few days later on 25 March he sent another copy to Désiré-Raoul-Rochette, the French archaeologist and Secrétaire Perpétuel of the Académie des Beaux-Arts. 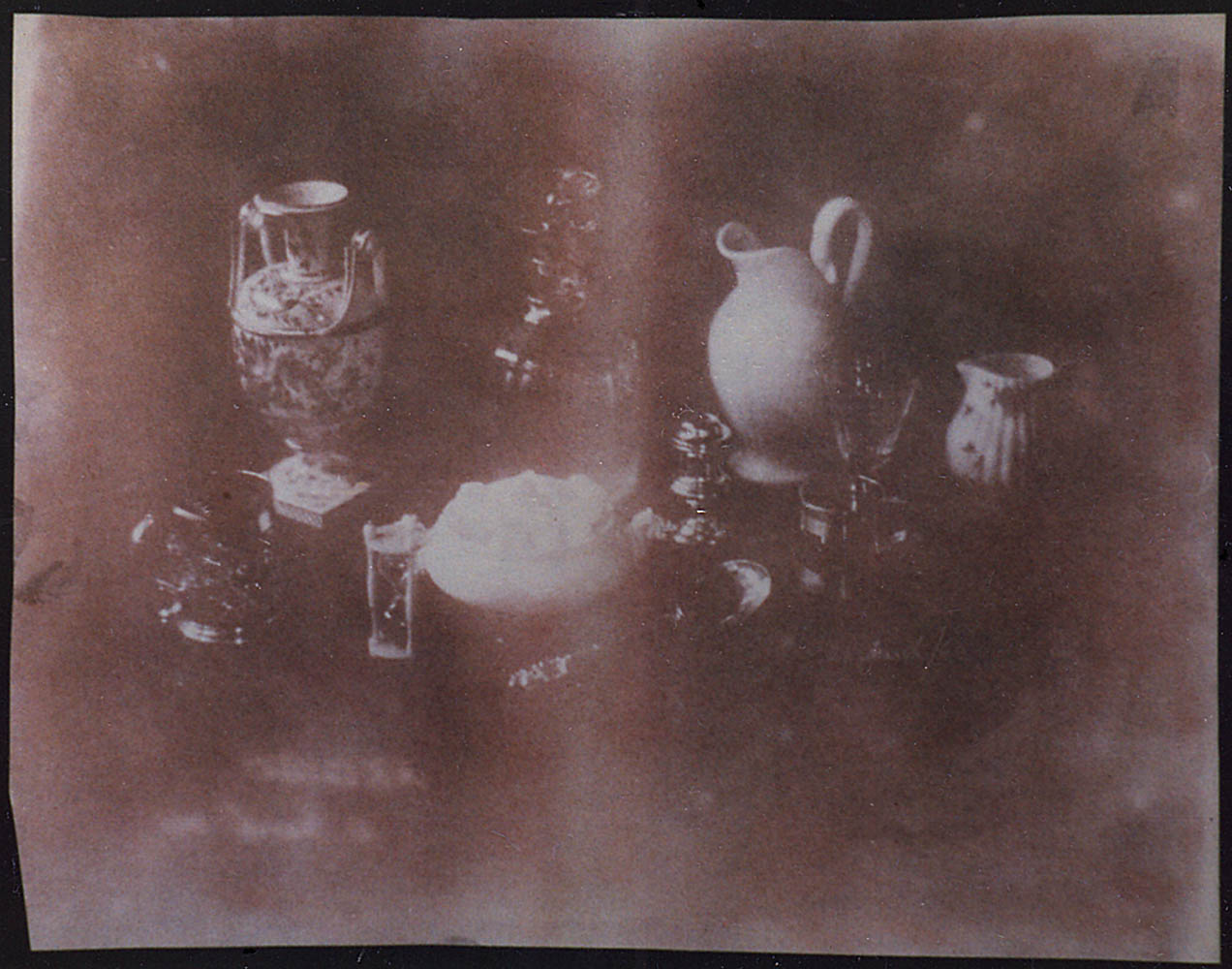 The modeling of light by sundry objects of virtue and others in daily practical use in Lacock Abbey fascinated Talbot.  As he pointed out in The Pencil of Nature, articles of glass and articles of china modulated light in very different ways.  Some of his arrangements were meant to emulate tables set for tea or other ‘real life’ situations, but the unusually high angle and the grouping of diverse objects here seem to indicate that he was simply celebrating light and its effects, especially since he recorded that he placed these against a black background.  This particular print has another aspect to it that is characteristic of the prints in the collection of the Académie des Beaux-Arts in Paris.  At some point in their life, the stack was apparently gently folded in half (but not creased) and they all possess the streak in the middle.  Is this the result of where coal smoke laden air penetrated the loosely folded tubular pile?   This print is the one that Talbot sent on 25 March to Raoul-Rochette and it is not known whether the streaks appeared during his ownership or sometime subsequently. 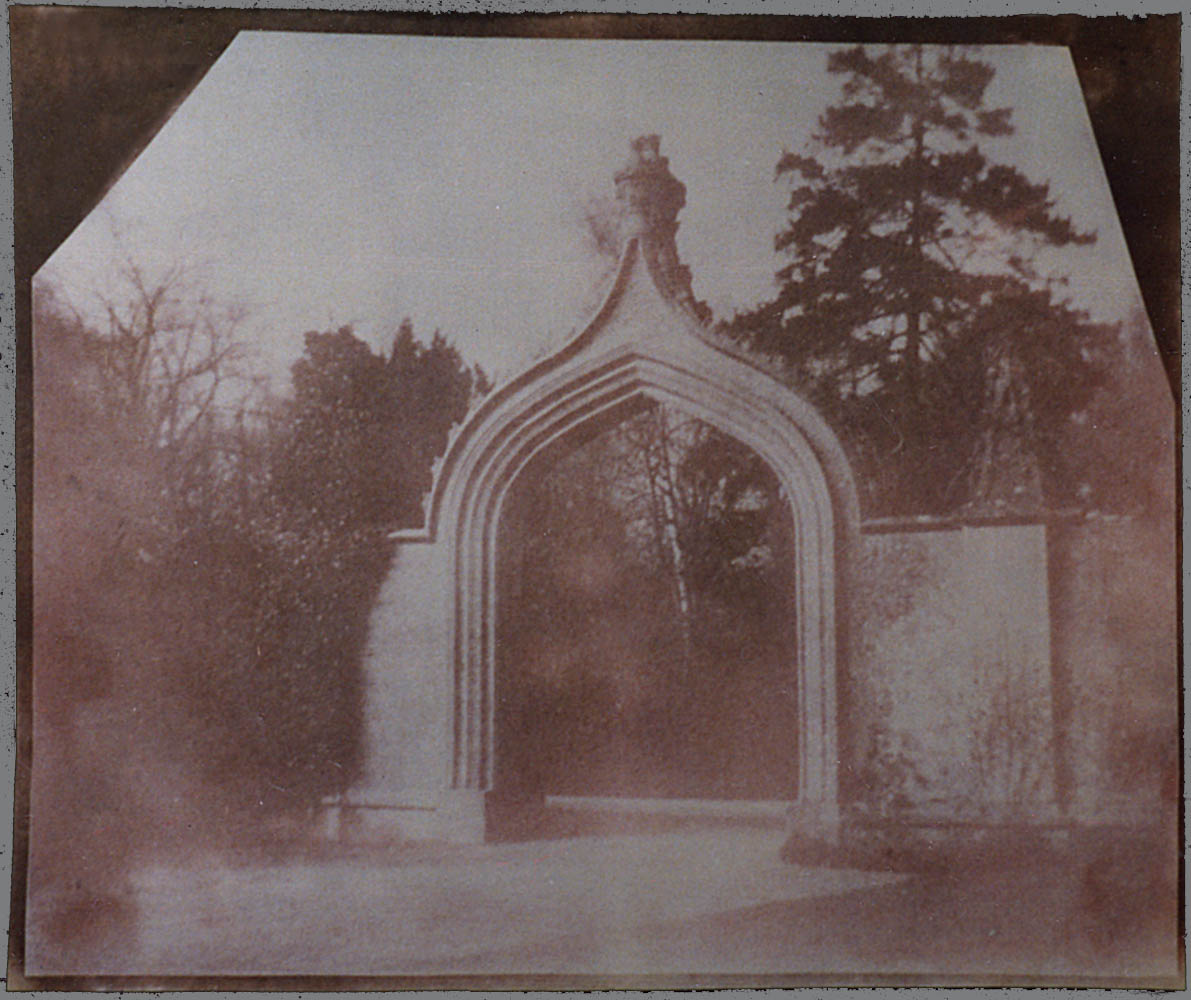 One approaches the front entrance of Lacock Abbey through this Gothick Archway, seen here as if you were Talbot himself standing below the entry steps ready to receive a visitor (although it was more likely that a member of staff would have made this initial greeting).  The trees have yet to bloom and since we are looking North the exposure must have been in the afternoon. The arch was a fairly modern afterthought, commissioned by John Ivory Talbot in 1754 to use up the dressed stone left over from construction of the Great Hall.  John Ivory wrote to the architect Sanderson Miller that since a “handsome sweep for a Coach and Six” led to the entrance “could not a Gothick Gateway be contrived in the Middle of the Wall wide enough to admit a Coach?” Talbot’s son, the architectural historian and archaeologist Charles Henry Talbot, was mildly offended by this pastiche. Miss Matilda Talbot recalled the visit of a neighbor “bringing her young daughter-in-law, who much admired the eighteenth-century pseudo-Gothic arch near the front entrance.  ‘Yes,’ said my uncle rather sadly, ‘I suppose you would admire it – elegant but corrupt.’  This reply served as a joke in the young lady’s family for a long time to come.”  Talbot sent another print of this to Raoul-Rochette and one to Sir John Herschel (it is now in the Gernsheim Collection at The Unversity of Texas at Austin).

Talbot not only dated the negative for this on the verso, but also recorded that the exposure time was nine minutes, probably a fairly typical time for a whole plate photogenic drawing negative exposed under good sunlight conditions. 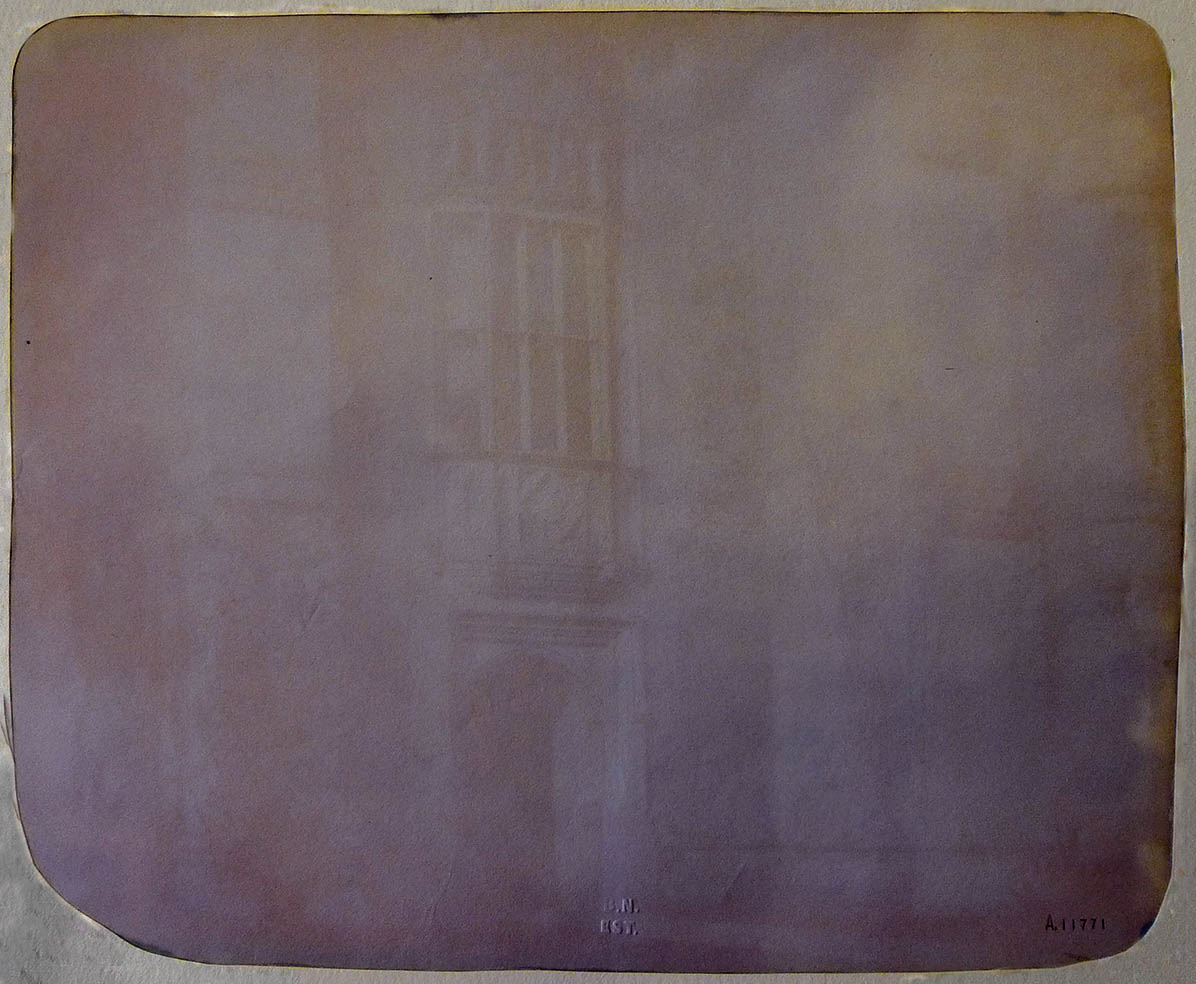 This was the print that Talbot sent to Sir John Herschel – another copy was sent to another of his old friends and supporters, Jean-Baptiste Biot.  But it wasn’t only to scientific and artistic colleagues that Talbot sent the fruits of this day’s labour.  On 28 March, his Welsh cousin Charlotte Traherne wrote: “Your photogenics are so beautiful that I cannot defer telling you how much we have been delighted with them – Mr. Dillwyn who happened to be with us when they came was quite surprized at the progress you have made and particularly pleased with the busts … your views of Lacock are so much brighter….”  Lewis Weston Dillwyn, the Welsh botanist and MP, was the father of John Dillwyn-Llewelyn, who along with his wife Emma (another of Henry’s cousins) became early practitioners of photography.