About a month ago in connection with Henry in Bronze & Stone, I made an appeal for other examples of surviving monuments.  One of the more surprising came out of Lisbon, the façade of the atelier of Luis Pavão.

Luis Pavão is a versatile photographer, conservator, and operator of workshops.  When he was putting a new front on his studio he decided to pay tribute to those who had made his work possible.  The bottom of the totem pole, reserved for the founders, finds Talbot accompanied by Nicéphore Niépce, Louis Daguerre, Sir John Herschel, Frederick Scott Archer and Gustav Le Gray.  Since Pavão is a master of processes, his pantheon continues upward through the technical history of photography.  Finishing the top row is the brilliant and much underrated Edwin Land and fittingly adjacent to him, our own Advisory Board member Dr Mike Ware.

A little side excursion: Henry Talbot almost crossed paths with Edwin Land, well, at least virtually on the printed page.  My late friend HJP ‘Doug’ Arnold, the biographer of Talbot, also wanted to do a biography of Land, a personal friend.  Sadly, the shirts at Polaroid quashed this idea and put a gag order on Land out of fear that valuable commercial secrets would leak out.  That proprietary information long ago ceased to have any value, but that lost opportunity to explore the history of this creative mind would have inspired many generations to come.  But back to our story,

If you are not already familiar with Mike’s charming and highly informative Alternative Photography website, do have a look at it, for it presents an unusual mix of chemistry, practical advice, history and good photographs.  Since Mike is known as the champion of iron-based processes, particularly the cyanotype, I couldn’t resist inverting the colours of Luis Pavão’s tiles to be more fitting for Dr Ware (apologies to the photographer).

I’m looking forward to receiving other examples of such testimonials. 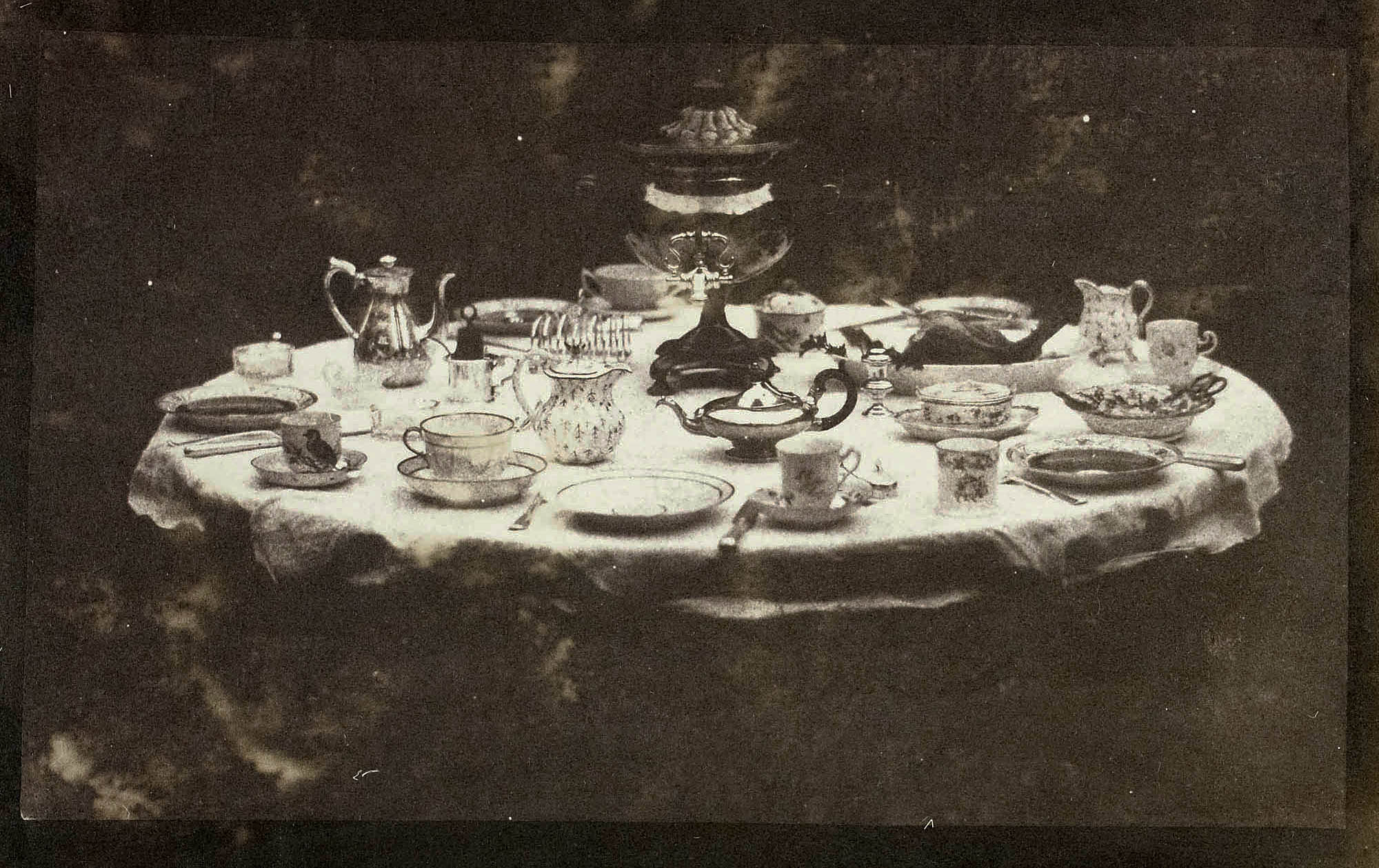 One of the most seductive groups of photographs taken by Talbot is the one that he did of tables set for breakfast, tea, or seemingly some whimsical meal known only to himself (and the servants who followed the director).  Lacock Abbey was not overly drafty and the often flowing tablecloths are readily explained by Talbot taking advantage of the fine indirect sunlight illuminating the North Courtyard or the inner Cloister of Lacock Abbey.  The various pieces challenged his negative paper with a wide range of textures, opacity, reflections, shapes and lines.  His view was almost always from the vantage point of a guest approaching the table, eager to be seated, and looking at his photographs, we become the guest, lured into the scene by our imagination of the tasty delights to follow.  These table settings reflected a whole culture, where the inhabitants of a country house could draw on cupboards full of specialised pieces of china and silver and glass to suit any occasion or cuisine.  Excluding simple place settings or representations of miscellaneous objects, Talbot took more than a dozen negatives of this sort.  The first positively dated examples of this genre were two negatives taken on 2 May 1840, using the photogenic drawing negative process, with later ones taken by the calotype.  Although I cannot be sure which one of these he selected, Nicolaas Henneman had a label made for prints for sale: “61. A Breakfast Service.”

The members of Talbot’s widespread family were almost all inveterate travelers and all too happy to act as ambassadors for Henry’s new art of photography.  In 1841, his half-sister Caroline wrote from Teplitz where she had just broken the photographic virginity of Lord Munster, showing the amazed President of the Asiatic Society the first photographs he had ever seen. The pair rushed over to see the municipal Librarian, Dr. Falkenstein, who expressed such an interest in them that she gave him several, including a “round table with a tablecloth très bien drapée.” His cousin Mary teasingly pleaded “pray bestow one of your table covered with ornaments (& 2 lumps of sugar on the breakfast table).”  Writing from a diplomatic assignment in Germany, his uncle William Thomas Horner Fox Strangways said that “I have received your beautiful Calotypes.”  He observed that “I particularly admire…the breakfast table & folds of the tablecloth prove to me that it would be invaluable to a painter for taking off natural copies of a difficult & troublesome part of the art, namely draperies, in which many even good artists fail.” 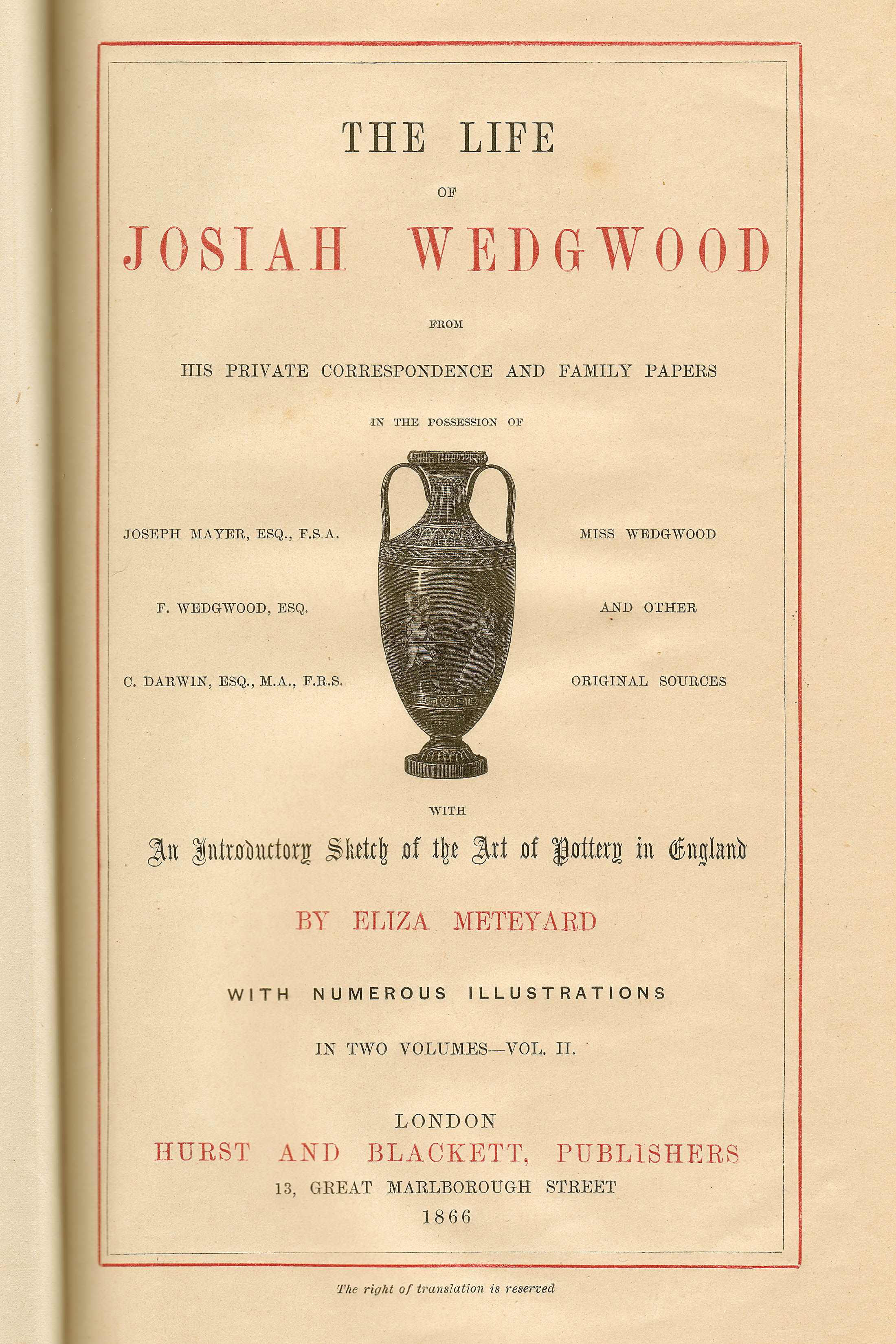 In 1864, claims were made that an 18th c. photograph of a breakfast table taken by Thomas Wedgwood had been located.  Eliza Meteyard first described her ‘discovery’ in her 1865  Life of Josiah Wedgwood and expanded on the story in her 1871 A Group of Englishmen. 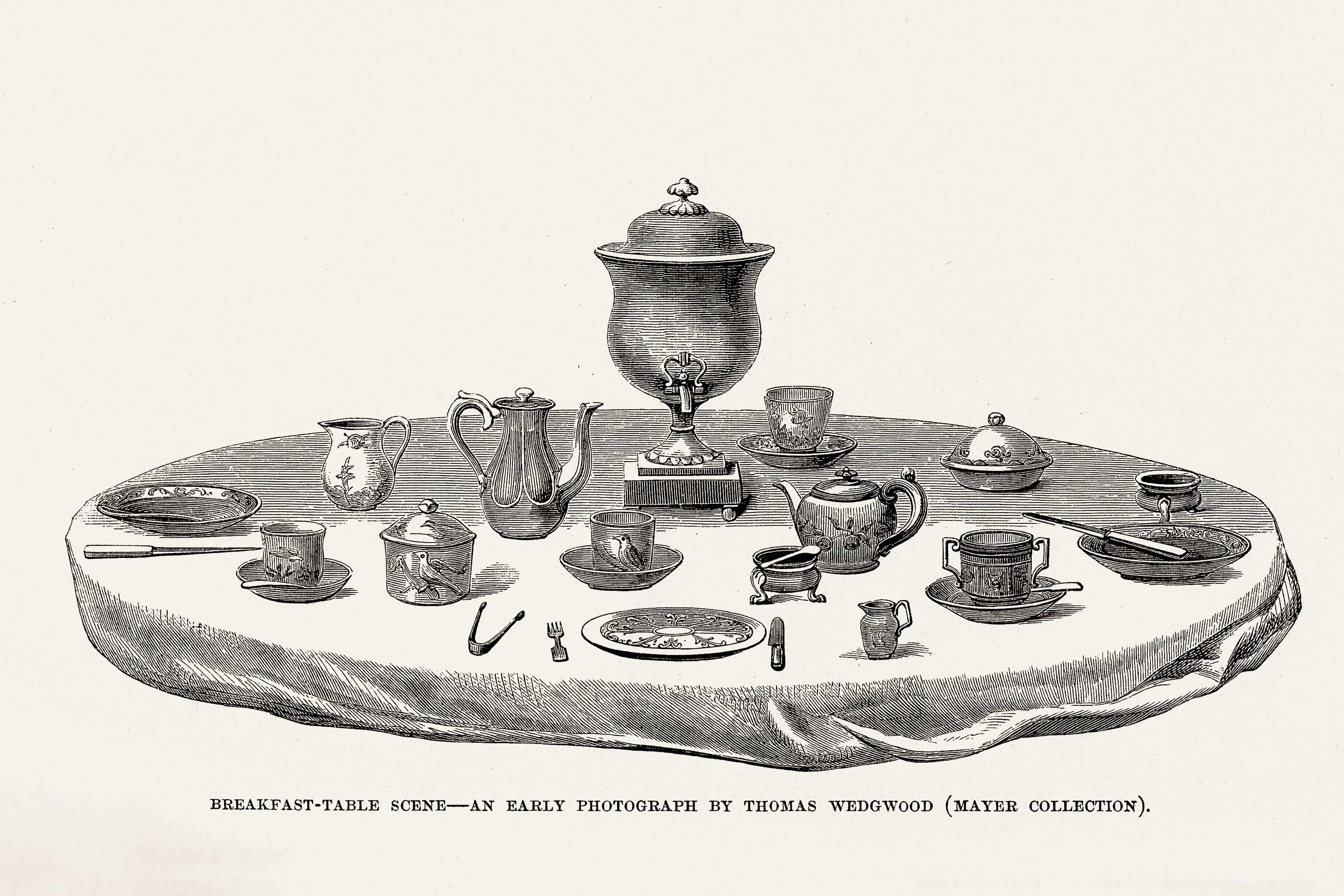 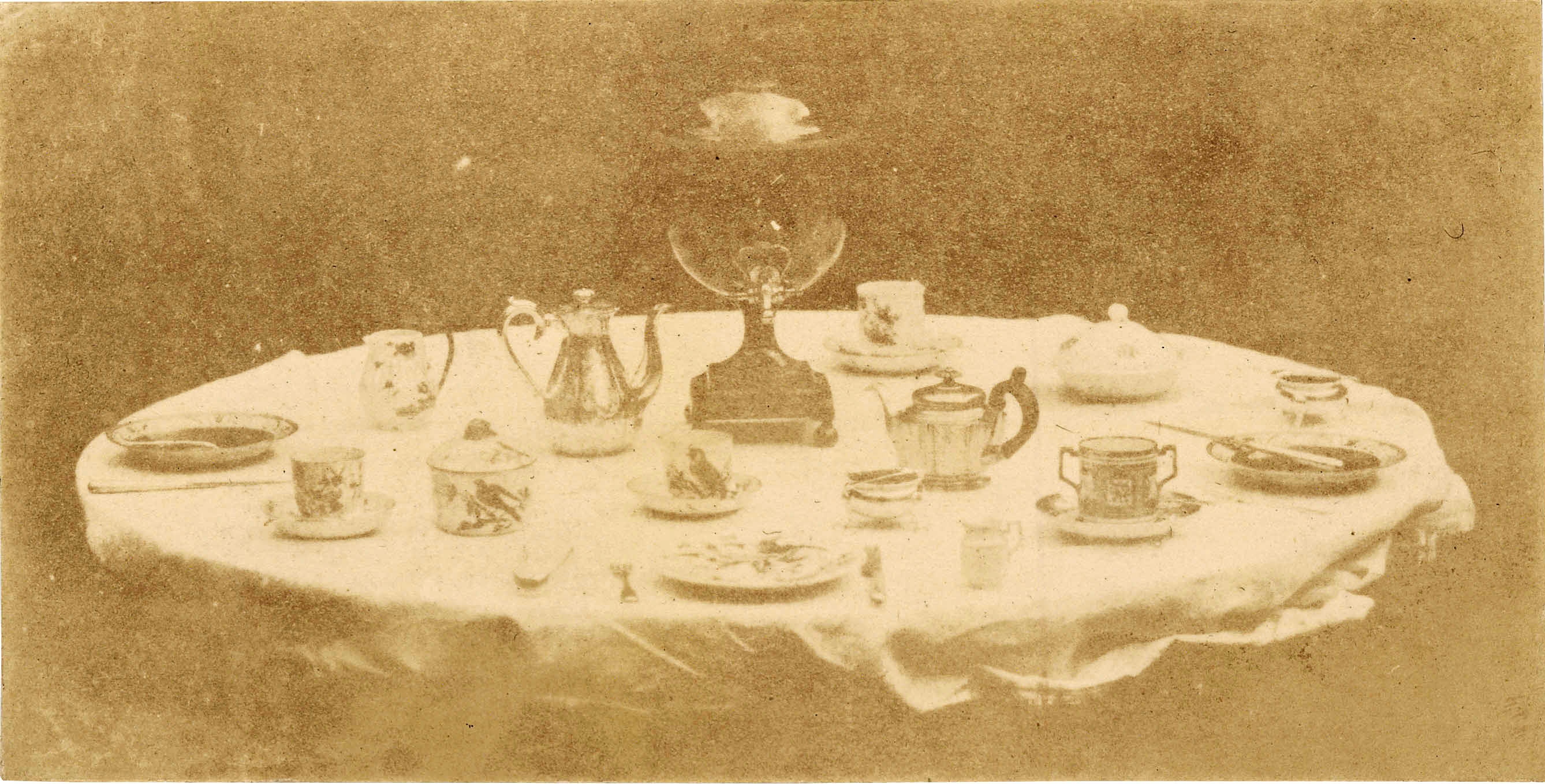 This is a print from the same negative that made the framed RPS one.

In spite of being confronted with this evidence, Eliza Meteyard clung to her fancy, amplifying and actively promoting the story for the rest of her life. Tom Wedgwood’s biographer, R.B. Litchfield, devoted an entire chapter in his 1903 book to “A Mythical Account of T. Wedgwood’s Photographic Work.”  My late friend Arthur Gill was still trying to stomp out the story in the 1960s, yet it occasionally turns up in ‘histories’ to this day.

The controversy provoked Henry Talbot into a rare public defense of his work.  Replying to an 1863 enquiry from Dr. Hugh Welch Diamond, he recalled that “I did make a photograph of knives and forks, &c., disposed upon a round table, which is seen very obliquely in the photograph. It was an early attempt, about 1841 or 1842. The view was taken out of doors, on the grass-plot in the centre of the cloisters of Lacock Abbey.” He pointed out that “Wedgwood, in his memoir of 1802 (Journal of the Royal Institution), says that he had thought of the possibility of making photographic views with a camera, but that, on trying the experiment, he had found that no length of time sufficed to produce any visible impression. Therefore, if any ancient photographs should ever be discovered, they will not be his production.”  A fortnight later, Talbot added that “I believe I have still at Lacock Abbey the negative of the photograph…in that case it will probably have a date endorsed upon it, as that was my usual practice at the time.”

Unfortunately, Talbot did not date all of his negatives, but his memory was otherwise correct.  This one survives, waxed but undated.