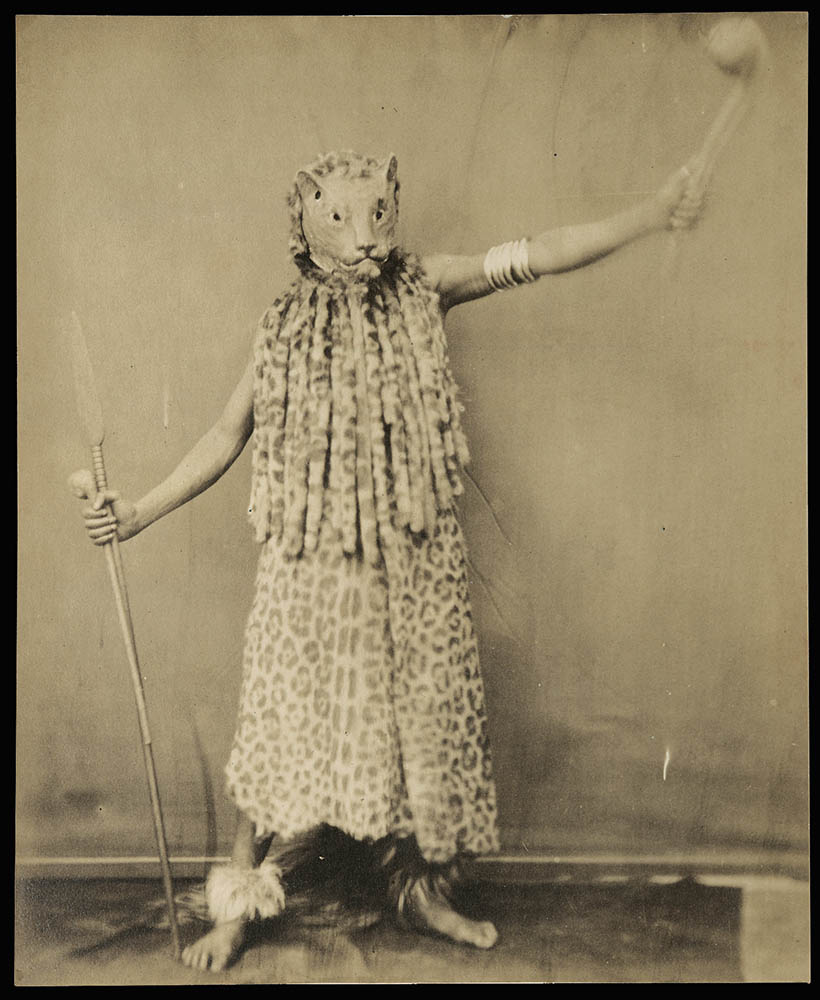 We have already talked a bit about Nicolaas Henneman’s role as Talbot’s most trusted assistant and the fact that he  believed so passionately in photography so as to leave Talbot’s employ for service to the new art.  By the early 1850s, facing competition and no longer one of the few practitioners, Henneman struggled to cope with the rapid advances in the field. One approach was to move his printing operation to the cheaper real estate and more reliable sunlight of suburban Kensal Green.  But his studio at 122 Regent Street in London remained the mainstay of his operation.  We know of many of the bread and butter portraits and other commissions that he undertook there, but photography was flexing its muscles and Henneman attempted some other less routine photographs.

In 1852, after performing at Cape Town, a group of thirteen Zulus was brought to London (with their promotor under bond to ensure that they were not being enslaved).  As was common at the time, these human ‘novelties’ were put on public display for eager paying audiences.  The Illustrated London News pictured them in woodcuts and observed that “the Zulus must be naturally good actors; for a performance more natural and less like acting is seldom if ever seen upon any stage.” Charles Dickens was impressed that “they are seen in an elegant theatre, fitted with appropriate scenery of great beauty…they are rather picturesque to the eye.” In Henneman’s photograph above, we see what the Illustrated London News identified as the “Zulu poet-laureate…who wears a leopard’s head and collar of tiger’s tails, when he chants the king’s praises.”   None of Dickens’s appropriate scenery is present.  The poet is performing in Henneman’s Regent Street studio, isolated by a plain backdrop, perhaps as a study for a woodcut or other hand-drawn art?

Such shows were of increasing interest in the mid-19th century and unusual and exotic examples of the human species were in high demand.  Building on Gulliver’s Travels, P.T. Barnum generated immense interest in Lilliputians by exhibiting General Tom Thumb. 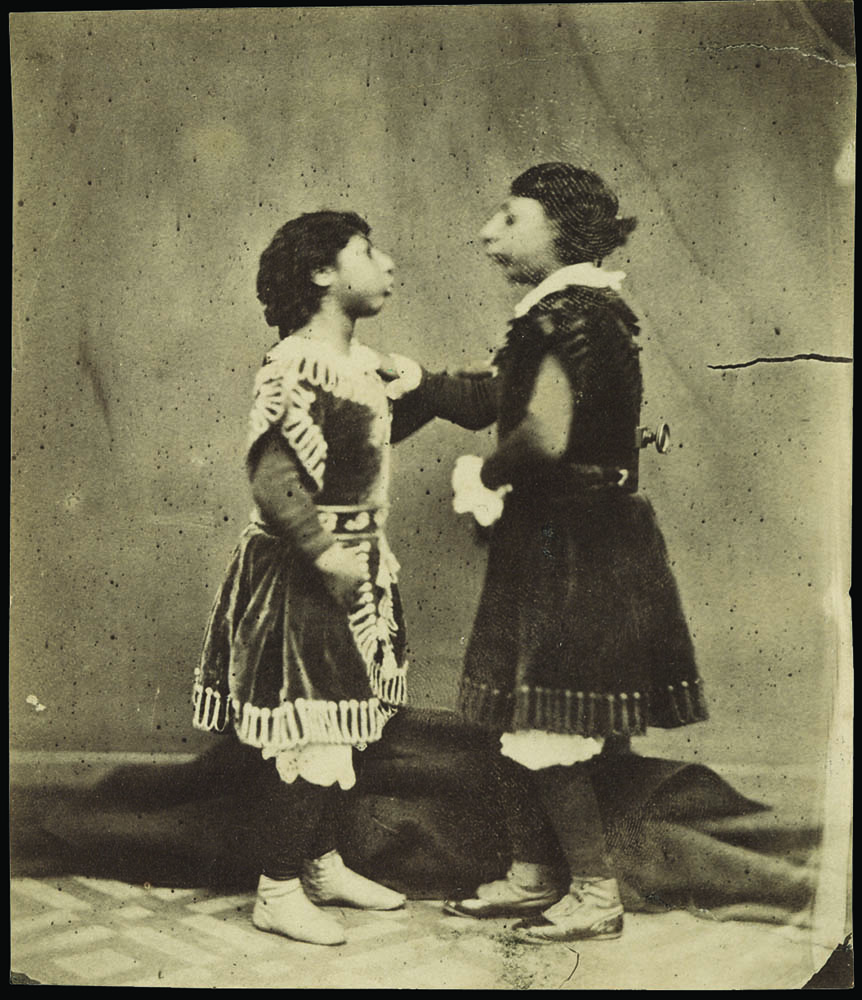 The parallel in Britain was the brother and sister team of Máximo Váldez Nuñez and Bartola Velásquez, the ‘Aztec Lilliputians.’ Born to peasant parents in Mexico, they suffered from microcephaly, with small heads and truncated bodies (yes, of Zika virus notoriety). The Spanish trader who promised a cure in the United States instead sold them into virtual slavery.  A totally concocted cover story about an Eventful Expedition in Central America soon led to the pair being exhibited as ‘The Last of the Ancient Aztecs.’  In July 1853, the arrival in Britain of the ‘Lilliputians’ was announced in The Times: “the scientific portion of the public has lately been much interested by the arrival of two children, of a race hitherto strange to London, from a mysterious region of Central America.”  On the 4th of July, the ten year olds were introduced to the Queen.  Almost immediately, “these unique, strange, and beautiful creatures, so unlike in form and feature to all other members of the human family” went on daily display in the Hanover Square Rooms. They are believed to have lived out most of the century, touring throughout Britain and eventually marrying each other in 1867. 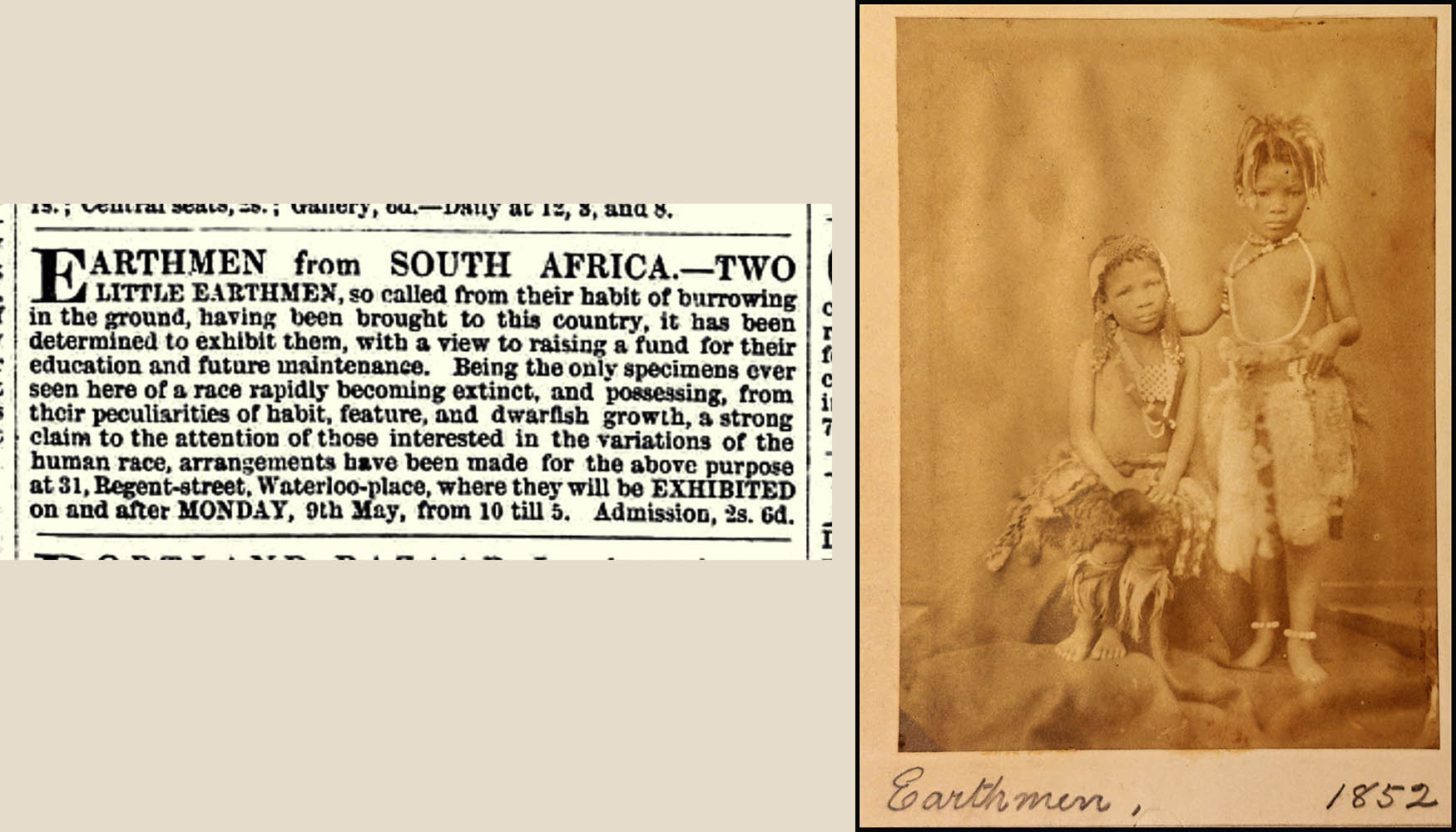 The ‘Earthmen of the Orange River’, Flora and Martinus, were brought to London in 1851, so the dating on this display example might be accurate.  About a meter tall (3’4”), they were in their mid-teens at the time.  This example was collected by Robert Murray (1798-1857), an Irishman apprenticed to the instrument maker John Newman, the landlord of Henneman’s Regent Street studio.  Murray also preserved the examples shown above.  Murray donated a number of frames of multiple artefacts of early photography, preserved in their original presentation by the Royal Photographic Society until its collection was sold about a decade ago. 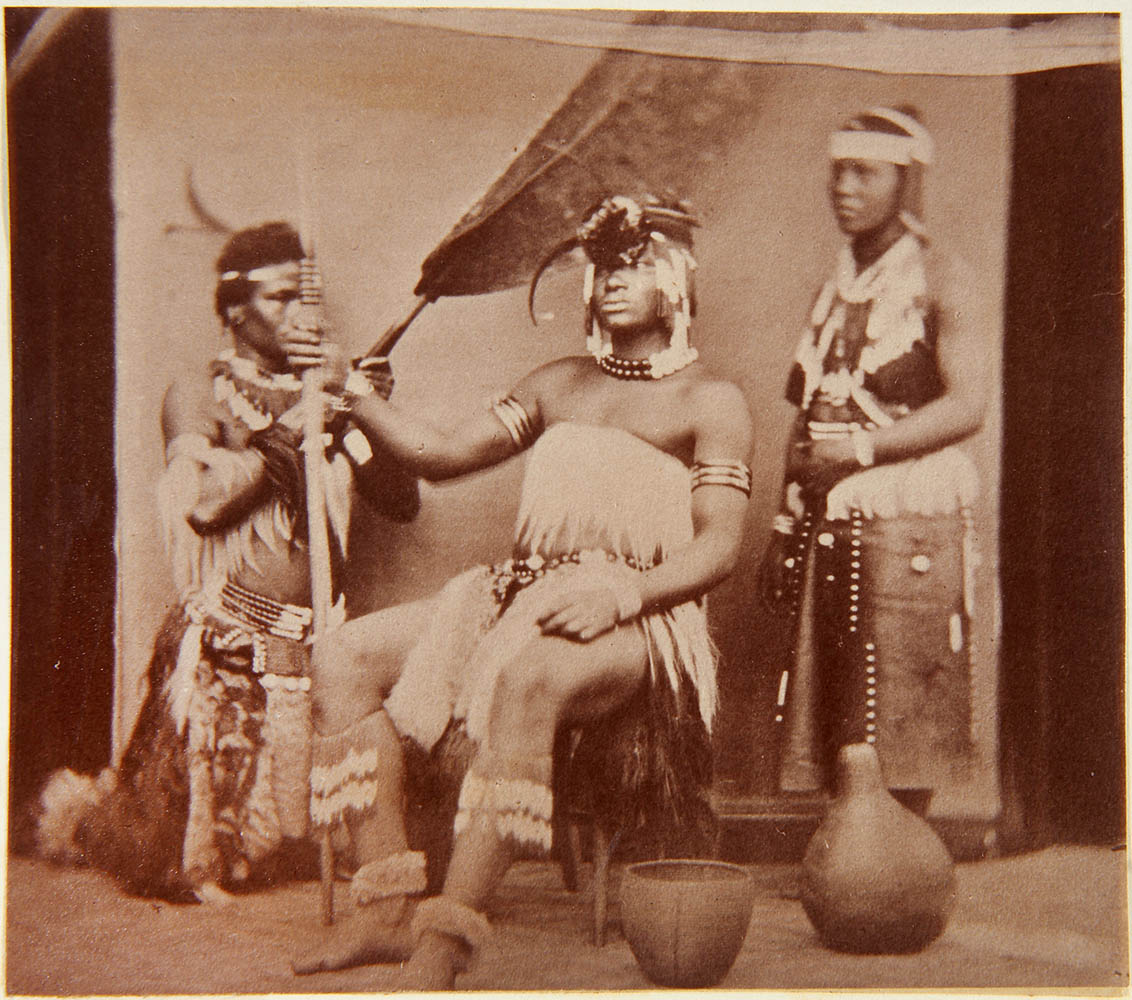 These examples are very rare.  They could have been highly sought after at the time, but Henneman must have done them on commission and whoever initiated this might have blocked the distribution of photographic prints in favor of projected sale of woodcuts or lithographs based on them.  But they could not block a Royal command.  This final example is in the Royal Collection, dated by Prince Albert 14 June 1853.  Whether that was the day he acquired them or whether he had knowledge of when they were taken is unknown.  The gentle reader may have noticed that the colour and tonal values are unusual here. In 1892, Gustav Mullins was commissioned to make carbon prints from the fading early photographic examples collected by Prince Albert.  Most of the originals, including all the original Talbots, in these calotype albums were discarded after they were copied.  For some reason – perhaps because they were seen as unique documents of the world outside Britain? – in the case of the Zulus, both the original and the carbon print were retained.

A frame of “Zulu Kaffirs, After Life” formed part of Henneman’s exhibit at the 1855 Amsterdam Exhibition of Photography and Heliography. 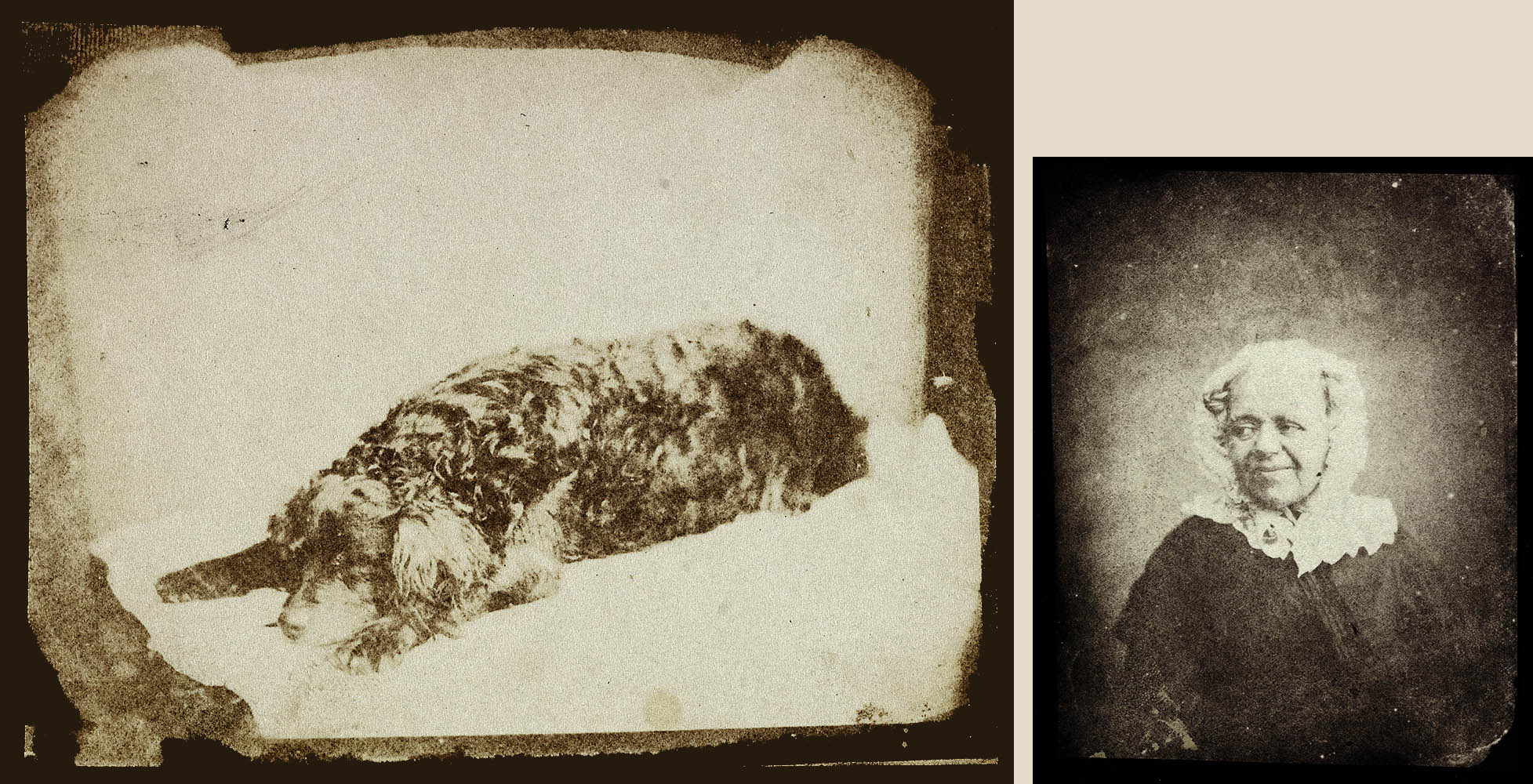 Even while he was still at Reading, Henneman had ventured into new subject areas.  Mary Mitford (1787-1855), the author and dramatist well known for her vividly described rural characters in Our Village, based her observations on a hamlet near her home outside Reading.  On 20 April 1847, Nicolaas Henneman reported to Talbot (in his usual eccentric spelling), “I should have come up to day but the celebrated Authoress, Miss Mitford, came to day and I got her to sit for her portrait, wish came out very fine considering her age, I think the negative is worth at least 25 pounds.”  In spite of her fame, that was probably a normal portrait session.  Henneman continued, “She begged of me to take her dog, (well knowing in most all her works) to please her I took him, not of course expecting he would remain quit and more over bing all of one collour (Dark brown) but wonderful to State he remained for 4 minutes as still as if he was dead, so I got a fine negative of him also.”  I doubt that this is the first picture of a dog – surely my Daguerreian friends will come up with an antecedent – but it certainly was a first for Henneman.  Dark hair and an unpredictable creature was a challenge for the calotype. 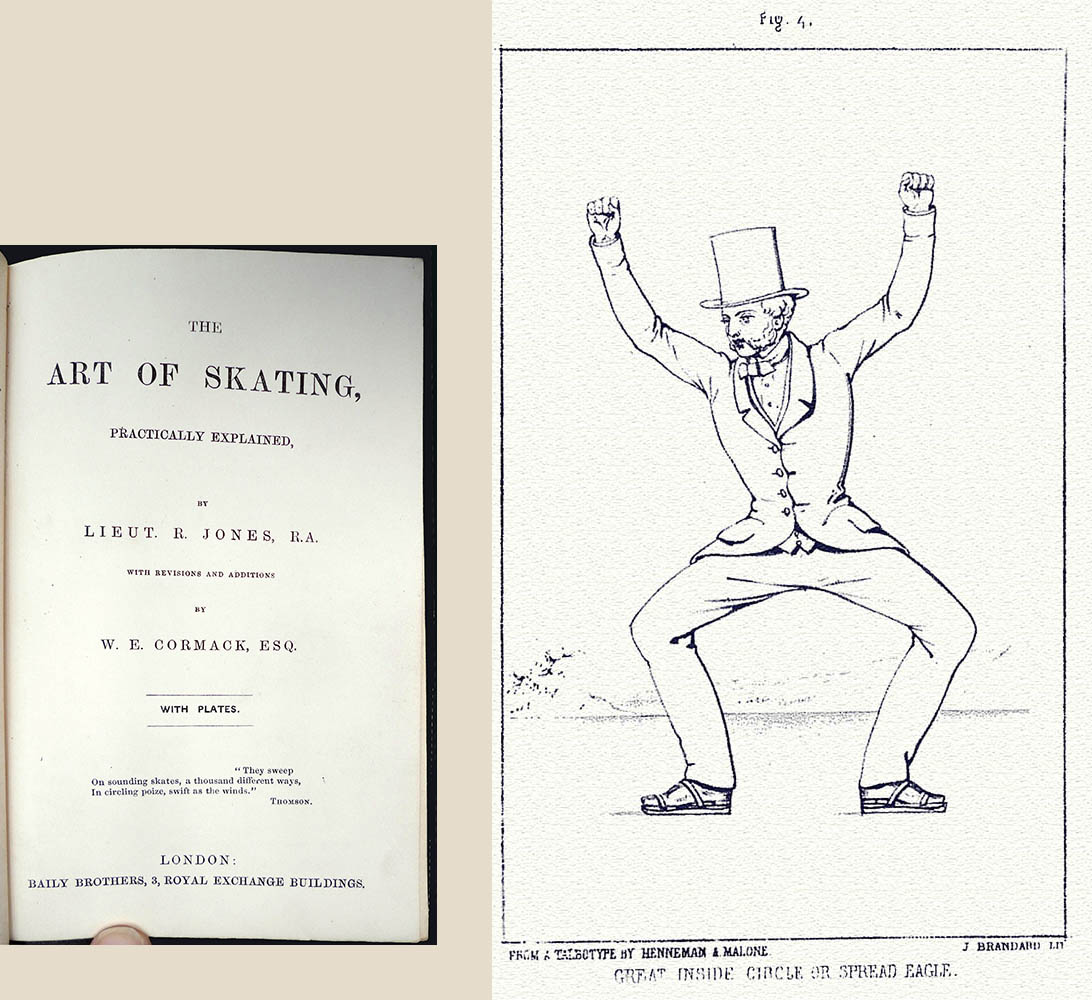 We end this little ramble with a photographic project that as far as I know survives only through the crude lithographs based on Henneman’s calotypes.

Of course freezing (sorry) the action of an ice skater was beyond the limits of the calotype so these were obviously posed pictures done in Henneman’s studio.  Artist’s sketches, done with the camera and probably catching with a high degree of accuracy the pose and muscle tension of the skating master.

Aztecs, Zulus, Earthmen, author’s dogs and skaters! I wonder how many other contemporaneous illustrations were based on Henneman’s photographs?  Now is the time for crowd-sourcing, since these images might turn up under just about any heading, indeed, something far from the imagination, such as ice skating. If you know of any books, broadsides or similar with Henneman roots, I would very much appreciate learning about them.