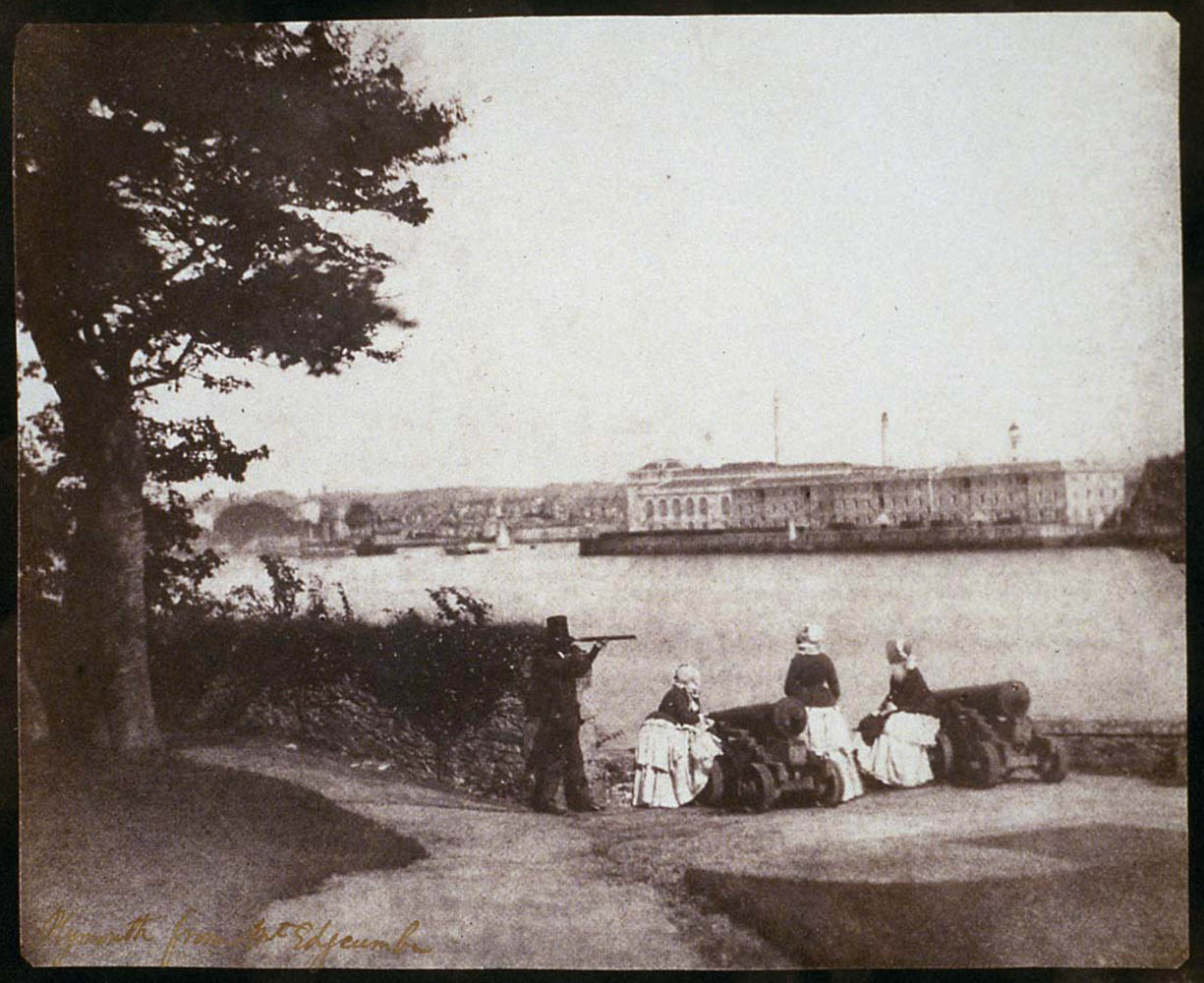 In spite of the cannons, the spectre of war is pleasantly remote from our thinking as we peruse this bucolic photograph. The scene is facing the great naval base at Devonport, outside Plymouth. Henry’s wife Constance was one of the women here – the other two were the maiden MacDonald sisters, but the conformity of the Victorian dress and the indistinctness of the calotype make it impossible to identify which is which. The man with the telescope is almost certainly Talbot’s friend, the calotypist and artist Rev Calvert R Jones, striking a characteristic pose.

The setting is the ‘Garden Battery’ at Talbot’s sister Caroline’s Mt Edgcumbe estate just across the Tamar from Plymouth. The installation was mostly ceremonial, an 18th-century platform sited to greet visitors with a 21 gun salute. In earlier times, the Admiral of the ill-fated Spanish Armada had fancied that Mt Edgcumbe’s mansion would become his occupation headquarters. In Caroline’s day, continued wariness of Napoleon’s ambitions forced Lord Palmerston to strengthen the coastal defenses. In early 1845, Caroline wrote to her brother that a new gun battery was to be erected on her estate “with a Barrack to contain 60 men, who will occupy it without waiting for actual war.” Caroline was a Lady of the Bedchamber to Queen Victoria and the War Office was very conscious of her social standing. She reported that “they will however make it in any shape we please & as picturesque as we like; which must be our consolation.”

On 7 September 1845, Caroline wrote again to her brother. Always encouraging him to take photographs, she pleaded that that she would “be delighted to have you here, & pray bring Mr. C. Jones too, & Nicole, & all the apparatus.” This almost certainly informs the dating of this photograph. Constance was so impatient to see a print that she promptly reminded her husband that “I do long to see the Mount Edgcumbe views – particularly the battery scene.”

Before the end of October, Nicolaas Henneman had supplied Talbot with prints of the “Victualling Office w/figures.” He soon printed up labels to affix to prints offered for sale : “160-162. The Victualling Office, Plymouth, seen from Mount Edgecumbe.”

Talbot was interested in the march of time and modernization and perhaps this photograph was a momento to a venerable landscaping feature about to give way to change. Shortly after this was taken the new fort was built very close to this site, only to be replaced in the 1860s with Picklecombe Fort. The commanding view over the waterway made this an ideal defensive position. A naval invasion never came, but during WWII the strategic importance of Plymouth made it an essential target for the Blitz. On the night of 22 April 1941, a Stuka’s incendiary bomb intended for the Plymouth docklands strayed over Talbot’s scene and landed directly in the library of Mt Edgcumbe, destroying the house that Caroline had lived in. Sadly lost in the conflagration were the letters and early photographs that Talbot had sent to his sister, an archive that undoubtedly would have greatly enriched our understanding of his early photography.

Coming full circle, the scene has long since returned to the tranquility of Talbot’s photograph. After the war, Picklecombe Fort was converted into what are now highly sought after luxury flats, their expansive view of the waterway has evolved to one of pleasure craft and sporting events rather than that of the dreaded approach of Napoleon’s fleet.

Questions or Comments? Please feel encouraged to contact Prof Schaaf directly at larry.schaaf@bodleian.ox.ac.uk •
WHFT, The Victualling Office, Plymouth, from Mt Edgcumbe, salt print from a calotype negative, September 1845. The Gilman Paper Company Collection, Metropolitan Museum of Art, New York; Schaaf 1931. Unusually, this is titled on the lower left of the print, Plymouth from Mt Edgcumbe. • Caroline Edgcumbe to WHFT, 13 March 1845, Talbot Correspondence Document No. 05207. • Caroline Edgcumbe to WHFT, 7 October 1845, Doc. no. 05385. • Constance Talbot to WHFT, 12 October 1845.  Doc. no. 05409. The MacDonalds were Caroline’s husband’s nieces through his sister, Lady Caroline Sophia Edgcumbe. Of the six MacDonald sisters, two remained unmarried at the time of this photograph. One shared Royal duties with Caroline, the Honorable Flora Isabella Clementina (1822-1899), who was Maid of Honor and later Woman of the Bedchamber to Queen Victoria. Her sister was Annie Sarah (sometimes Sarah Anne), who in 1848 married Alfredo Salvatori Ruggioro Andrea, Baron Porceilli di Sant Andrea, a Sicilian nobleman and revolutionary commander. On 4 February 1848. Caroline and her sister Horatia were in Palermo with Sarah Anne when the Revolution reached a critical point.  Happily, Caroline reported the next day that all were safe.  An account of their rescue is contained in the Earl of Mount-Edgcumbe, Extracts from a journal kept during the commencement of the Revolution at Palermo, in the year 1848, second edition (London: James Ridgway, 1850), p. 30.