The month of June 1842 had been a busy one for Talbot.  Suffering from one of his recurring bouts of ill health, he was just winding up an extended trip to Germany and France, where happily he found that contact with scientific colleagues combined with mountain air did him a world of good (in spite of his complaints about the “broiling sun”, which might strike a chord with today’s readers).  Returning to Britain, he participated in the British Association for the Advancement of Science meeting in Manchester.  Queen Victoria narrowly escaped another assassination attempt, bravely drawing out John Francis whose flintlock pistol fortunately proved inaccurate.  By early July the whole country was in celebration for their beloved Queen.  Henry Talbot retreated to the familiar surroundings of Lacock Abbey 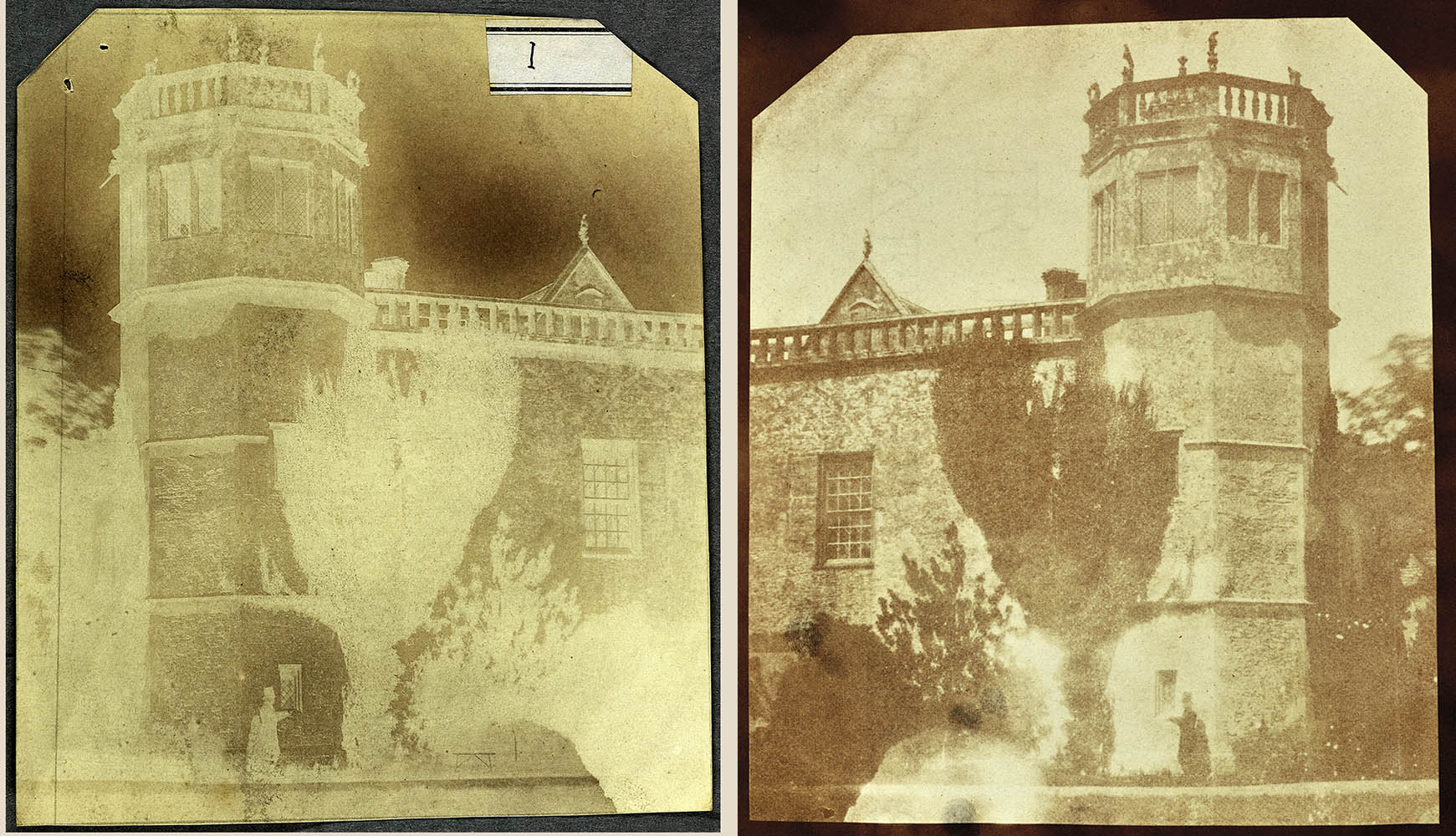 This July 1842 view features Sharington’s Tower, the architectural anchor of the southeast corner of Lacock Abbey.  The famous Oriel Window is far to the left of the frame.  Judging by his stature and the dating, the top-hatted figure at its base must be Sir David Brewster, the irascible Scottish scientist and journalist who had formed an improbably close bond with the reticent Henry Talbot.  John Herschel had introduced them two decades before and Brewster soon lured Talbot away from mathematics and towards the physical sciences. Normally based in St Andrews, near the end of June 1842 Brewster was in Leamington Spa.  Henry was unable to make a dinner invitation with him but instead suggested that “I hope you will (being so near) come to spend a few days at Lacock Abbey and make some Calotypes with me.”  Brewster had good reason to visit his friend.  On 10 July he replied “if it is convenient to you it will give me great pleasure to spend a couple of days with you this week … as I am collecting materials for an Article on the Calotype and Daguerreotype for an Article which will appear in the Edin Review for Octr next, I am very anxious that you should provide me with any historical or personal details which have not yet appeared respecting the Calotype, and which I know would be very interesting.” 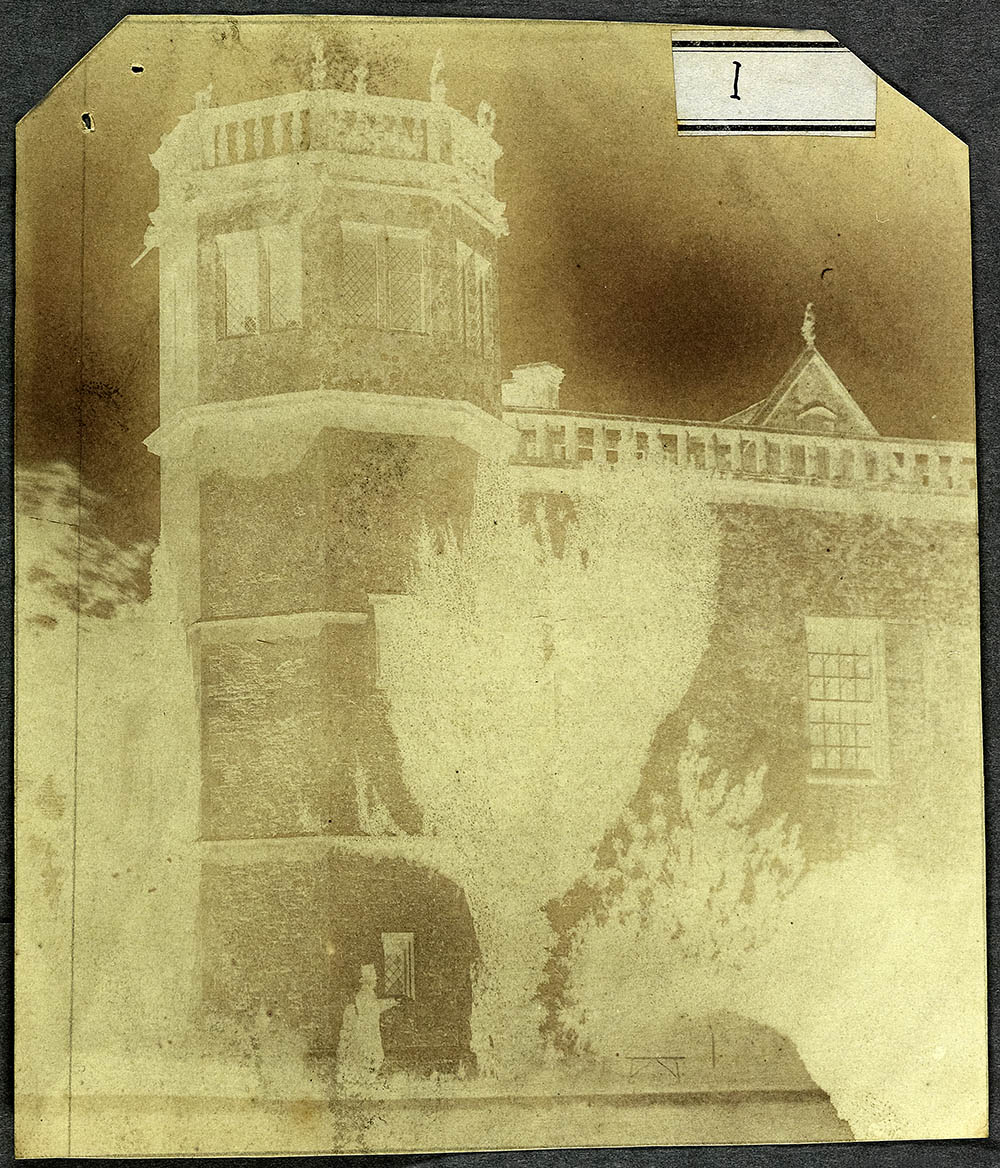 Brewster stayed several days at Lacock, arriving the morning of 15 July and departing sometime before the 20th.  I wish that Lady Elisabeth had been there at the time to record some juicy news in her diary and sadly any other documentation is sparse.   But make some calotypes they did.  I know of 74 negatives and prints that can be positively dated to July 1842, representing 24 distinct images.  About half of these were taken after Brewster’s visit, eight of them are dated simply ‘July 1842’, one is from the 15th and two from the 18th.  So I believe that about ten images survive that were done during Sir David’s three day stay, including this splendid negative.  We don’t know what they talked about or specifically what chemicals or cameras they used.  We don’t know if Brewster actually selected some subjects and set up the camera.  My personal feeling is that he probably played more the role of Lady Elisabeth, essentially acting as a film director rather than as a scriptwriter or cameraman. 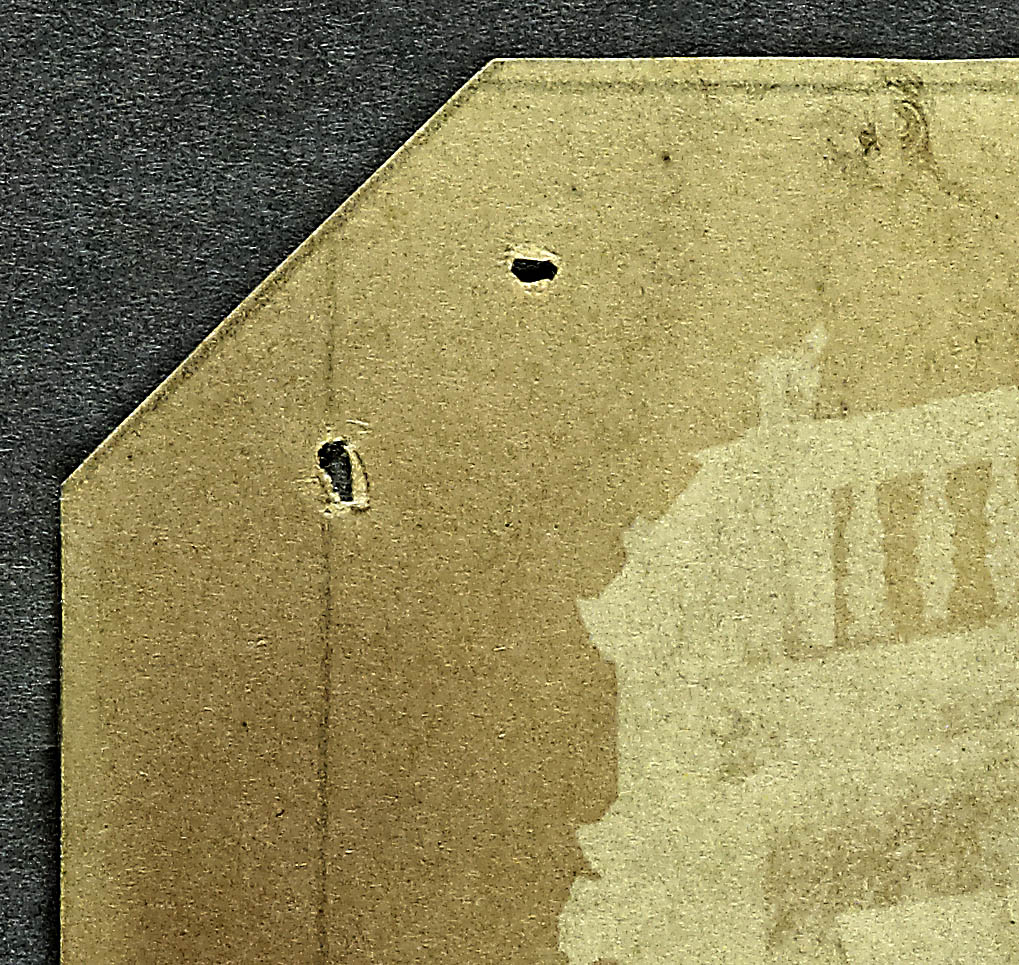 As is the case with so many of Talbot’s original negatives and prints, this one tells multiple stories.  In the first instance, it preserves the sunlight of that particular day in July 1842, giving us a view of Sharington’s Tower and the stance of Sir David Brewster.  We can feel the heat of the sun and trace the progress of the ivy.  But there is also a physical story to be told.  This negative has withstood a lot.  First its top corners were chopped, and then the secondary pencil lines show that it could anticipate some further treatment from Talbot’s shearers.  That never happened, but what justifies the brutal violation of the holes in the upper left corner?
And the pasted-on ink label intruding the negative space in the upper right? There are a number of negatives and prints that survive with these ‘blue paper labels.’  They correlate with the listing that was made up for a 1934 exhibition at Lacock Abbey.

Matilda Talbot, the granddaughter who had arranged the exhibit, annotated this copy of the catalogue:  “List of Exhibits shown at Lacock Abbey on July 27th, 28th, 29th 1934.”  The holes are probably explained by the fact that category I  was affixed to a screen, ie, a vertical surface.  Unframed, Eighty-two years ago almost to the day this negative was pinned up on a board for display within Lacock Abbey.

Talbot had hoped that Brewster could join him at Leamington Spa and then move on to Kenilworth Castle for some photographic sessions together.  Unfortunately, Brewster suddenly had to return to Scotland so the brief period at Lacock was their only work together at this time. At the end of July, Talbot wrote to the close family friend Amélina Petit  about Sir David’s visit:  “He stayed for three days and we did many experiments together; I took his portrait, which is true to life, and I will send it to you.”  It is an interesting portrait, but as this blog is already straying outside the boundaries of the Summer Pleasures, we will have to revisit it in future.