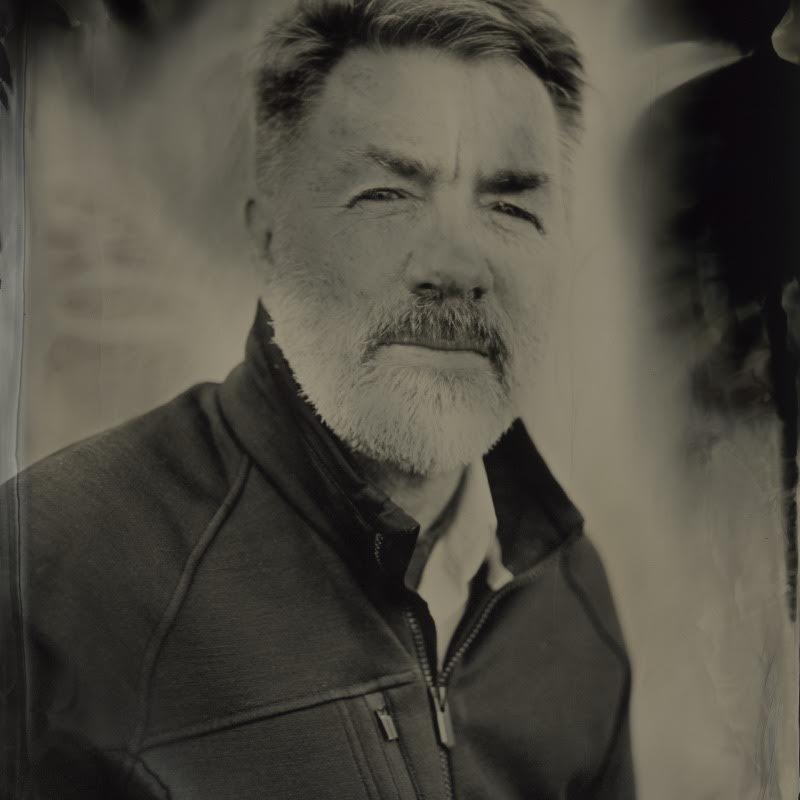 This week I am delighted to introduce the first of our guest editors, appropriately my old friend Professor Geoffrey Batchen.  He teaches art history at Victoria University of Wellington in New Zealand, specializing in the history of photography. His many and influential books include Burning with Desire: The Conception of Photography (1997) and Each Wild Idea: Writing, Photography, History (2001). In April 2016, his exhibition, Emanations: The Art of the Cameraless Photograph, opened in New Zealand, celebrated by a book of the same title just published by Prestel.

Now that Geoff has broken the ice, I look forward to hearing from other readers who might wish to contribute their own guest post.

When the work of William Henry Fox Talbot is represented in histories of photography, it is usually accompanied by one or more of his most celebrated images, invariably the best surviving prints, richly toned and in pristine condition. But it could well be argued that this 1846 print of One of the Towers of Orleans Cathedral, as seen from the opposite Tower, faded and forlorn though it is, marks the most significant turning point in Talbot’s photographic career since his announcement of the invention of photogenic drawing seven years before. 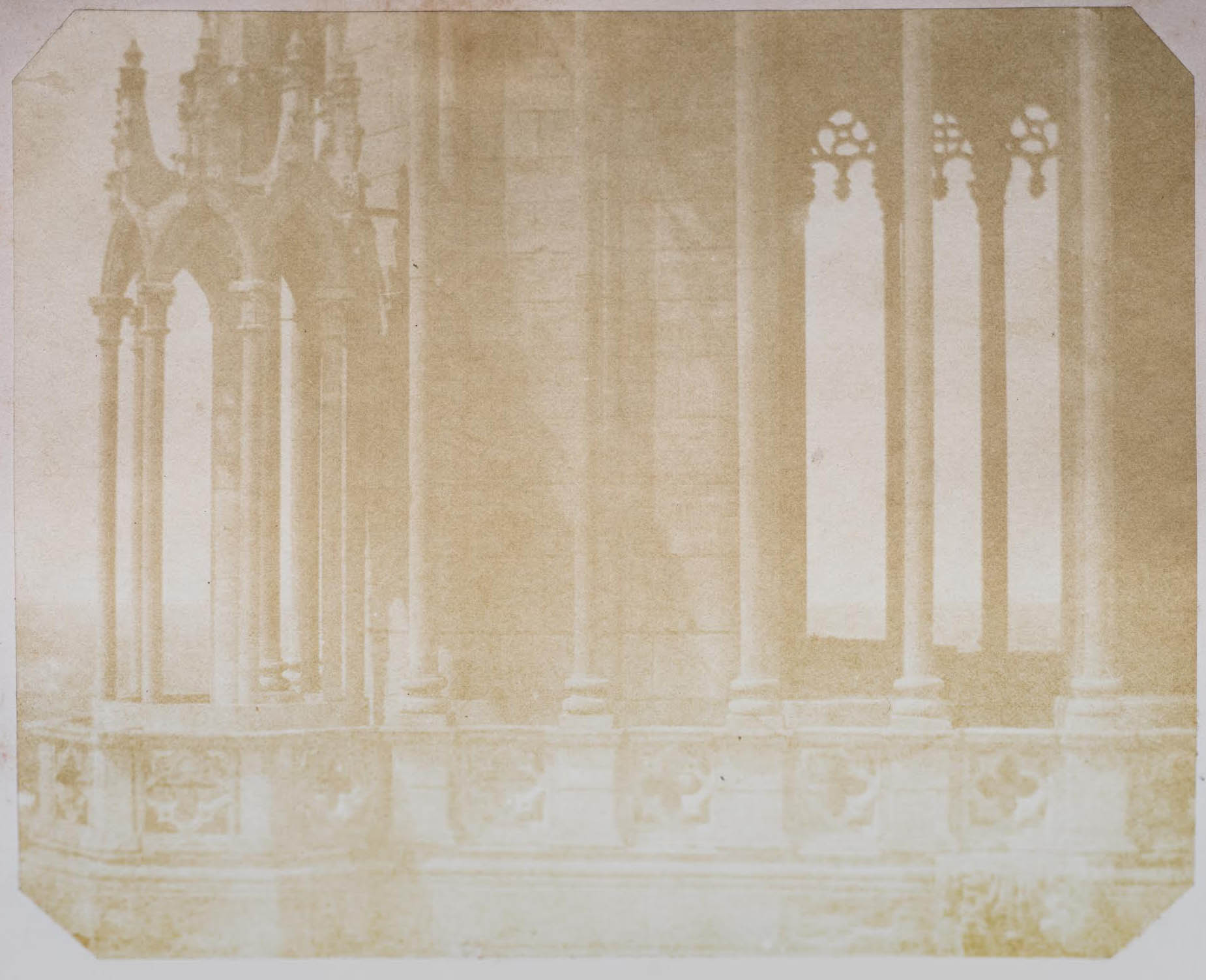 Talbot exposed his calotype negative during an 1843 trip to France intending to promote his process in that country. He also took this opportunity to shoot a considerable number of pictures. Among the places he visited was Orléans, about 110 kilometers south-west of Paris. Talbot’s travel diary records his movements on June 21 during that visit: “W. 21.  visited ye Cathedral: & Botc. Garden at Sunset.” Having already shot the cathedral from a distance, while recording a view of the town square (or Place, as he called it), Talbot also made at least two close-up photographs of this impressive building, one of the last cathedrals to be built in France. Ascending one of the cathedral’s two towers, he made one exposure about a third of the way up, and another at the top of the tower (the picture being discussed here), capturing a view in each case of the corresponding architecture of the other tower. As Larry Schaaf has pointed out, this architecture, although of ancient appearance to us, was in fact newly installed, part of a widespread programme in which historic buildings were being renovated, even partially transformed, all over France.

Having captured views of the overall form of the building in other photographs, Talbot here offers us two severely truncated details. In both cases, he has carefully positioned his camera so that the left edge of the tower is isolated against the sky and a distant glimpse of the town below. As a consequence, the other three edges of the picture are allowed to crop the building at abrupt and seemingly arbitrary intervals. The long-focus lens he has employed to capture the tracery of the ornate carving has also flattened the perspective so that the resulting images look like unusually faithful sepia versions of architect’s renderings. This initial impression is punctuated, however, by the glimpses we are allowed through the columns of the tower and out to the sky on the other side, unmistakable signs of the structure’s three-dimensionality. The viewer seems to be floating in space, seeing this building as no ordinary parishioner would ever have seen it, not looking up from far below but hovering up close, like an angel or perhaps even a god.  Photography is shown to be capable of dividing the world it pictures into discontinuous fragments, a kind of ruthlessly unharmonious vision later to be associated with Baudelaire’s poetry and Impressionist painting. This is, in other words, an entirely modern kind of picture. 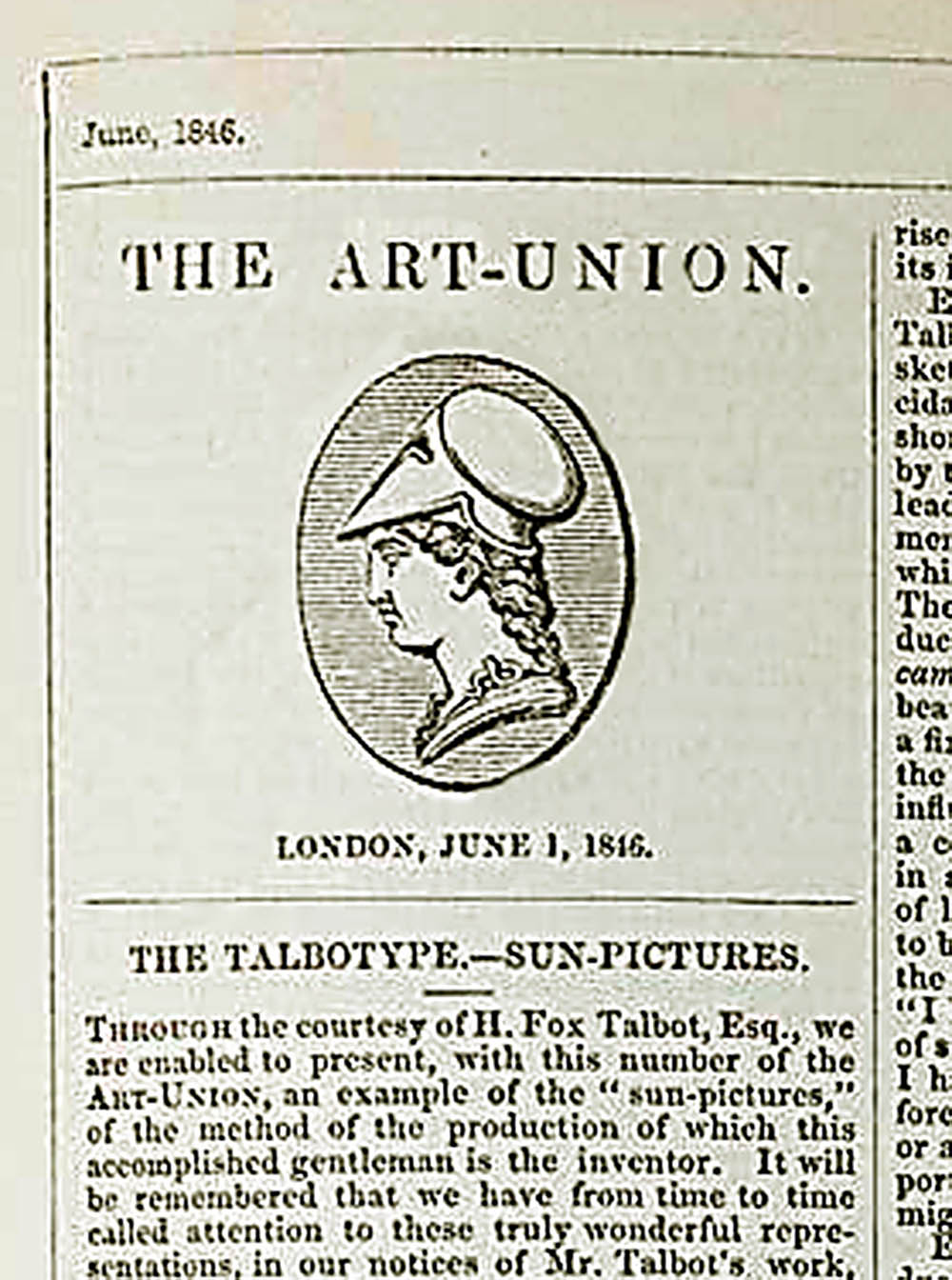 Talbot had at one point imagined putting together a book of photographs of cathedrals  but when that ambition went unfulfilled he added two of his Orléans photographs, “Orleans Cathedral” and “Orleans Place,” to a list of additional plates for The Pencil of Nature. Unfortunately, these additions were never issued. Talbot nevertheless obviously admired the pictures he had taken there. In a letter to his mother dated 30 January 1844 he advised her “do not stick into the album the 3 views representing the Cathedral of Orleans; they are too faint, & I have now got much better ones.” He finally received an opportunity to release them to a public audience in 1846, when he agreed to provide 6000 salt print photographs to the editor of the Art-Union, to be published in the June issue. These photographs were produced in a rush by Nicolaas Henneman and his team of workers, men or boys, at the Reading Establishment.   In order to meet the required deadline, Henneman used every negative at his disposal and this included at least four taken in Orléans, one of “The principle Place in the city of Orleans,” one titled “Talbotype of Bridge of Orleans over the Loire,” and two versions of “One of the Towers of Orleans Cathedral, as seen from the opposite Tower.” Henneman  printed these titles on labels, along with the italicized words “From Nature” and the date of exposure, “1843,” which were then tipped in to some of the copies of the Art-Union.   The print reproduced here is in a complete volume of the Art-Union that I bought on eBay in June 2013, evidence that some photographs by Talbot remain relatively affordable. 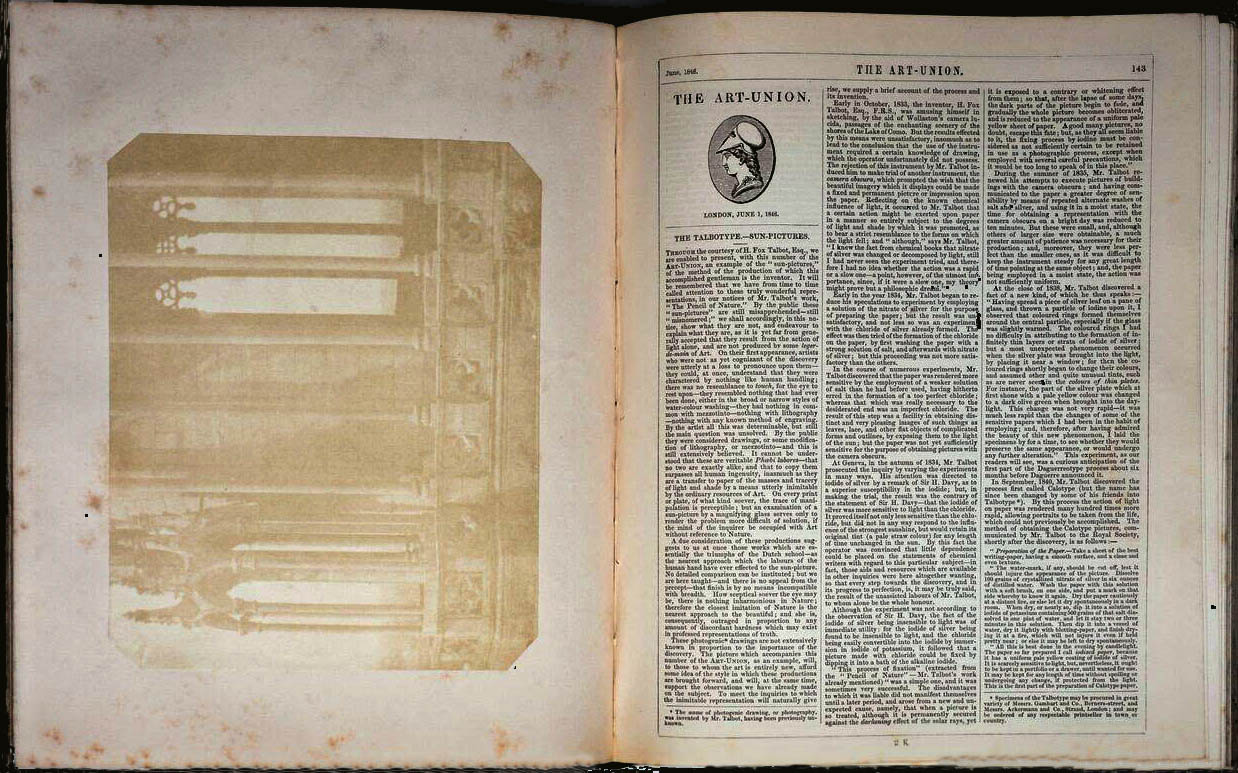 Unfortunately for Talbot, the Art-Union project proved to be a promotional and financial disaster with most of the photographs fading soon after publication. Pale and indistinct, their limitations as illustrations was made all the more apparent by their placement in the Art-Union, allowing a direct comparison with the many kinds of fine engravings and other reproductions to be found there. Prompted by the failure embodied in photographs like this one, Talbot spent the next fifteen years experimenting with processes that would allow permanent ink on paper photomechanical engravings to be made.

In October 1852 Talbot filed a patent for ‘Photographic Engraving.’ In April 1858, perfecting a way to introduce an aquatint ground to the process, he filed another patent for an improved system of photogravure which he called ‘Photoglyphic Engraving.’ Having invented negative-positive photography, the system of representation that dominated the nineteenth century, Talbot now introduced photomechanical reproduction, which would similarly dominate the twentieth. He therefore made possible a culture based on the mass reproduction and distribution of photographic images, the culture in which we all live today. Only by admitting “bad” prints into our histories of photography can we illustrate this important story, hence my choice of One of the towers of Orleans Cathedral for this posting.

•  Questions or Comments? Prof Batchen can be reached at geoffrey.batchen@vuw.ac.nz • Please feel encouraged to contact Prof Schaaf directly at larry.schaaf@bodleian.ox.ac.uk  • Kari Wehrs, Geoffrey Batchen, tintype, 2015.  •  WHFT, View of one of the towers of Orleans Cathedral, salt print from a calotype negative, 21 June 1843; mounted in an original copy of The Art-Union: Monthly Journal of the Fine Arts and the Arts, Decorative, Ornamental, v. 8, June 1846; Batchen Collection, Wellington, New Zealand; Schaaf 2727. • WHFT, 1843 Field Diary, Fox Talbot Collection, The British Library, London; Add MS 88942/5/1/34. • See Larry J Schaaf, The Photographic Art of William Henry Fox Talbot (Princeton: Princeton University Press, 2000), pp. 164-165; 250.  • WHFT to Lady Elisabeth Feilding,  30 January 1844; Talbot Correspondence Project Document No. 04929.  • Both versions of One of the Towers of Orleans Cathedral, as seen from the opposite Tower are reproduced in Gail Buckland, Fox Talbot and the Invention of Photography (Boston: David R. Godine, 1980), p. 150.  • Like many of the volumes on the market of this once-common journal,  my Art-Union lacked a provenance; the printed labels were applied only to a small percentage of the copies.