I have a good friend (a conservator, and I shall say no more) who has the lovely subconscious facility of combining words into new and wonderfully expressive ones. She once expressed concern about a ‘pondery’ – the state of pondering a quandary – a really descriptive and useful word that I think should be given consideration by the editors of the Oxford English Dictionary.

The close friendship of the highly popular Irish poet Thomas Moore and the considerably more reticent Henry Talbot might seem an unlikely one.  The Moore’s Sloperton Cottage in Wiltshire was only a couple of miles from Lacock Abbey and the two families were good friends and regular visitors.  As we shall see, Henry gave his friend good reason to experience a pondery. 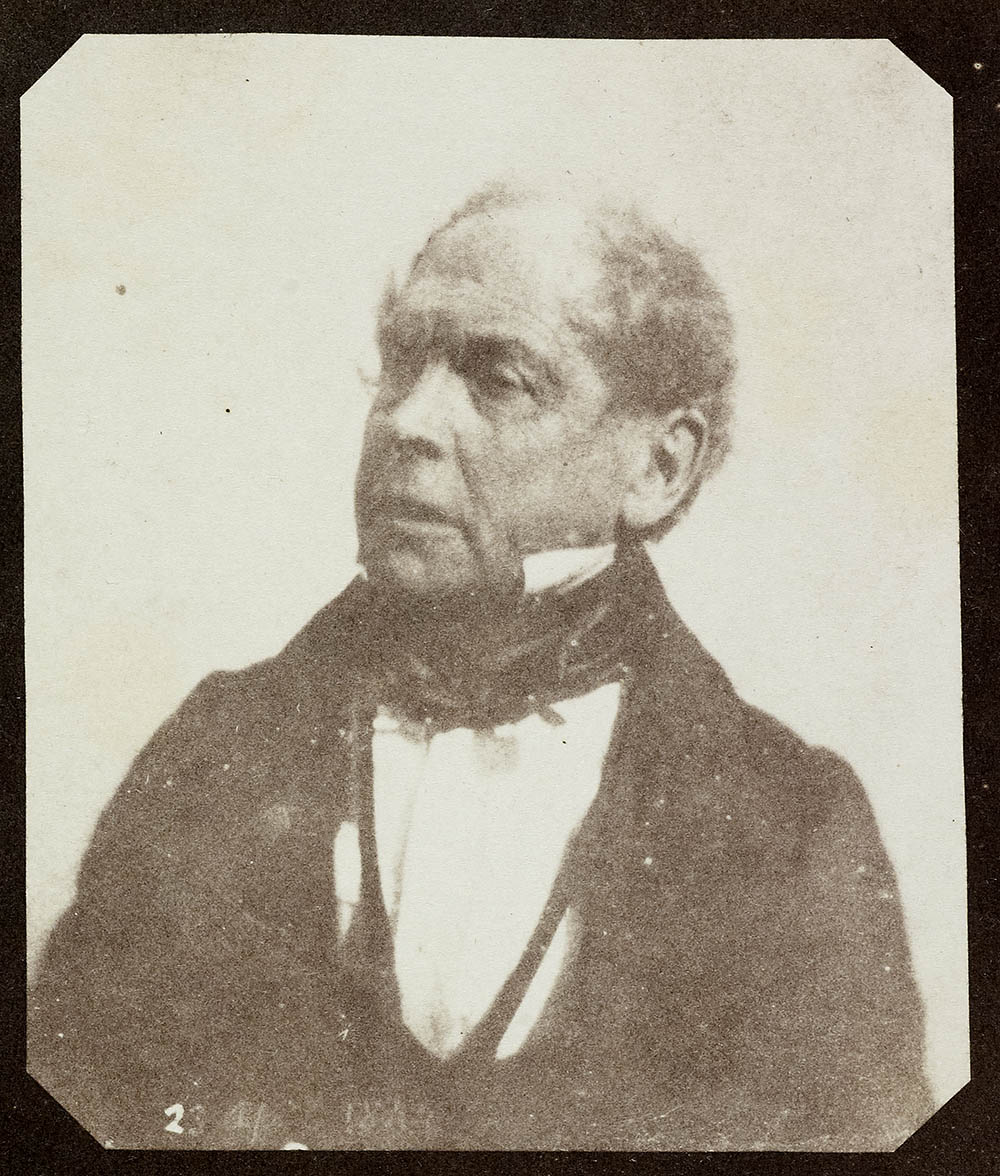 At first, Talbot made a simple request of the poet – the loan of an original manuscript page in the hand of the late Lord Byron to use as a photographic subject.  Three years later he was to involve Moore more directly in photography. 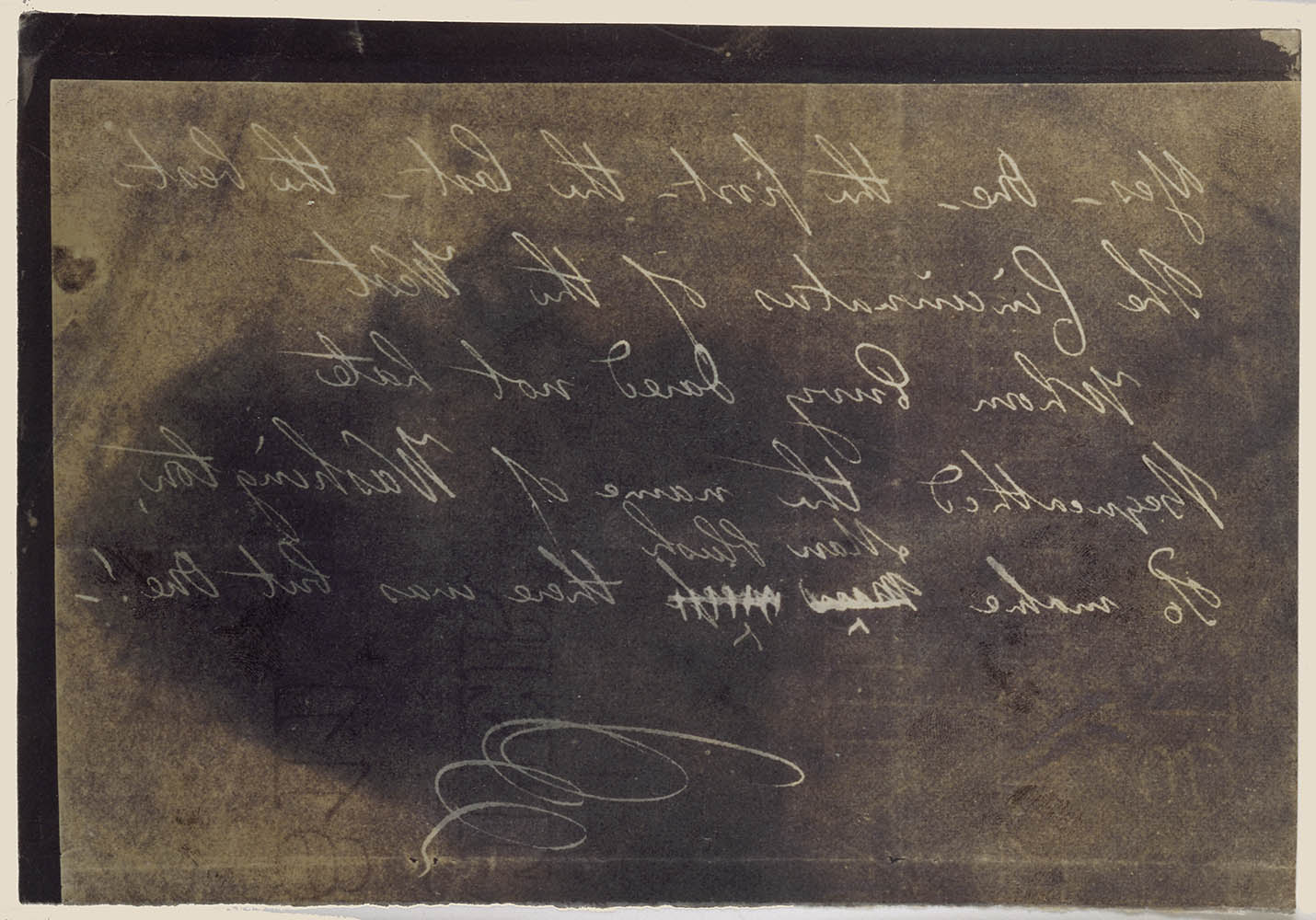 Yes – One – the first – the last – the best –
The Cincinnatus of the West
Whom Envy dared not hate
Bequeathed the name of Washington,
To make men weep Man blush there was but One!

Lord Byron wrote his Ode to Napoleon Buonaparte out of disgust over the leader’s abdication.  At first published anonymously in 1814, the author’s identity was soon revealed.  Moore, as confidant of the mercurial Byron, became the editor of his Works after the poet’s untimely early death and in the process amassed a collection of original manuscripts in Byron’s hand.

A bit of a poet himself in his youth, Talbot maintained an interest and it was natural that when photography became public he would consider the two together.  Early in 1839, he mused about the possibilities of taking the “Houses of poets, photogenically executed,”  but this was so early that he was still mastering the photographing of architecture by practising on Lacock Abbey.  There was tremendous interest in the copying of manuscripts and he borrowed this leaf from Thomas Moore.  Although the final stanza also had the flourish of a signature, his choice was probably driven less by literary preference than by practical concerns.  Talbot made his photogenic drawing negative by sandwiching the original manuscript with his sensitive paper in sunlight – writing on the verso would have confused the image.  Normally watermarks were problematic for Talbot.  He cut up the large sheets of paper so that watermarked areas were used for making prints and clear areas of the paper reserved for negatives.  As it is, the 1811 watermark on Byron’s original sheet of writing paper is reproduced prominently in the negative, but instead of being a drawback, this provided a form of historical proof.  This negative is undated, but on 4 April 1840 Talbot wrote to Sir John Lubbock, enclosing “the  facsimile of Byron’s writing.”  A few months later Constance wrote to Henry about their Devizes neighbor Dr Robert Herbert Brabant: “Dr Brabant has just called … he wished to tell you all about his travels & the brilliant success of your Photographics, especially the Manuscripts which were much appreciated by the German Savans.” 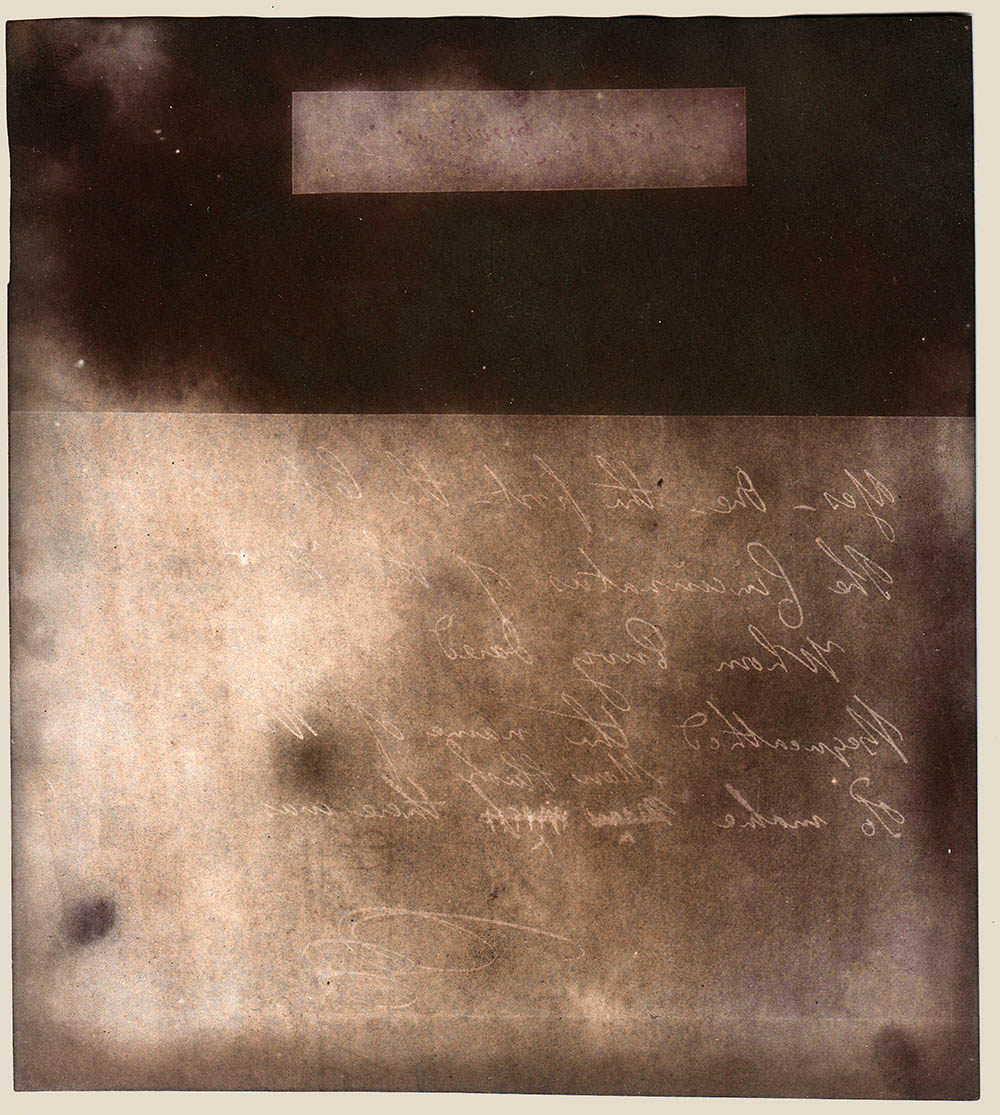 Talbot experimented making a number of negatives, probably all in one session when he had the original manuscript in hand, and even tried introducing a handwritten title into the negative:

In the spring of 1840, smack dab in the middle of a string of scientific research ideas in his notebook,  Talbot jotted down the thought for “The Tribute of Science to Poetry, two views of house, and one copy of manuscript.” 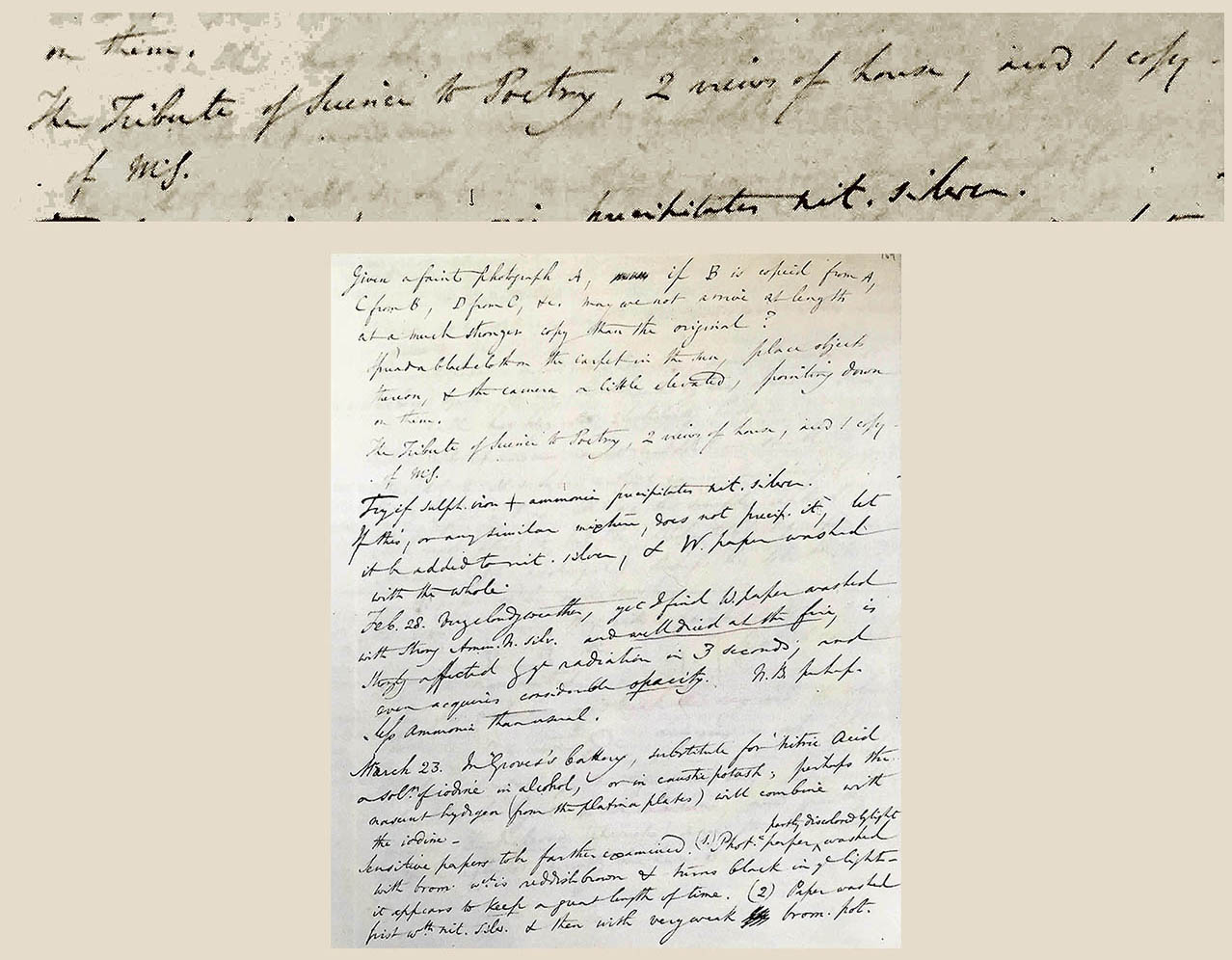 I’ve a couple of thoughts of possible Talbot views of Sloperton Cottage, yet to be confirmed, but we do have Moore’s manuscript.  After planning some form of the publication for a long time, Talbot started publishing The Pencil of Nature in the summer of 1844.  His original concept called for fifty plates representing a wide range of subject matter and naturally he turned to his friend Thomas Moore.  The poet first declined to participate, saying in August 1844 that “as I could not please myself in any of the trials I made to pen something for the Book, I am most glad that I did not send you any thing inferior stale – for, to have been in partnership with Sol without doing any thing worthy of the connexion would never have done for a poet – or rather would have done for me entirely.”

Whether it resulted from his natural attraction to publicity or from his friend’s persuasiveness we will never know, but Moore did compose a manuscript for Henry to use in making a negative. 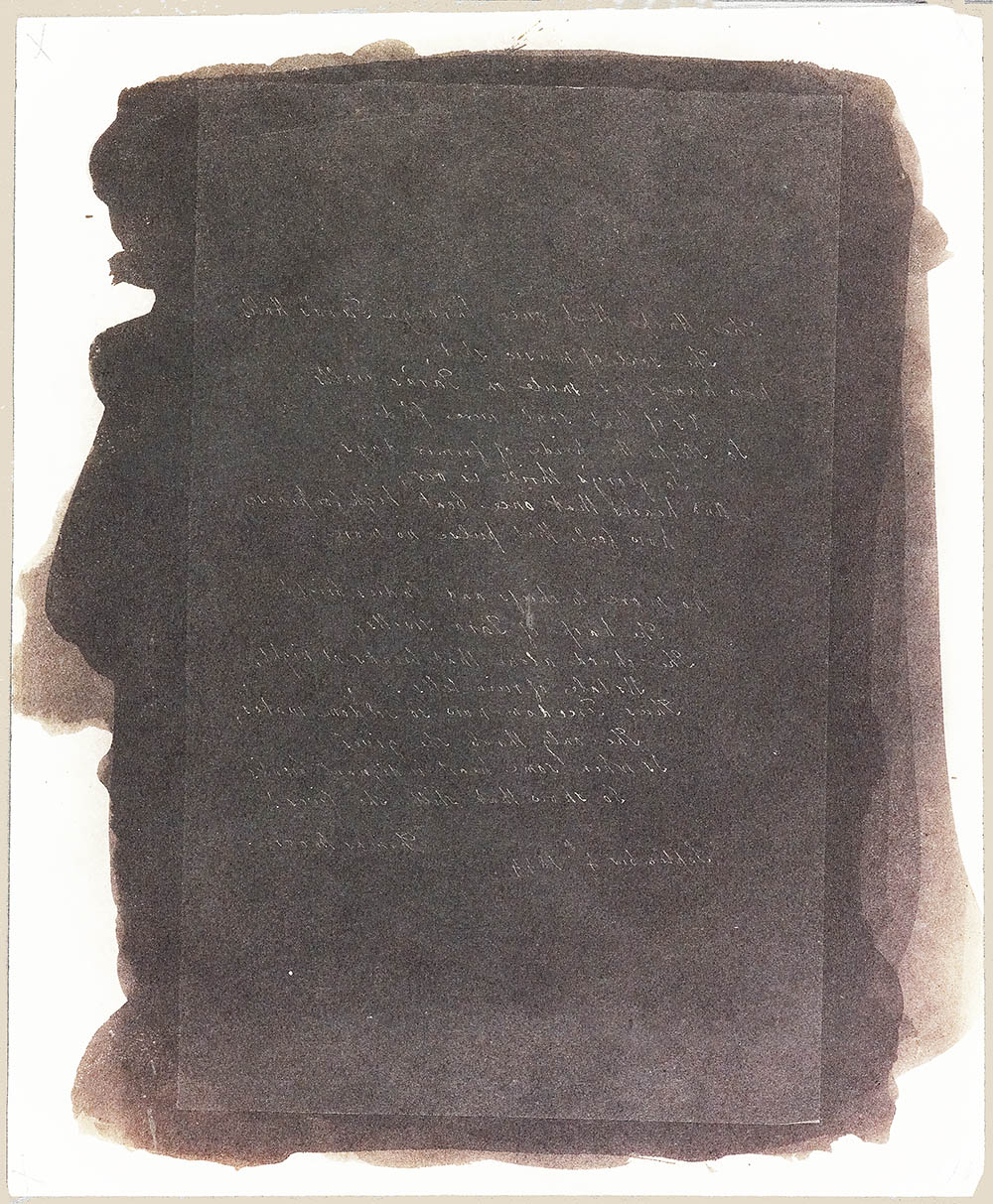 It did in fact produce several fine negatives from which some prints were made, very convincingly reproducing Moore’s original hand and signature.  Talbot explained some details about how Moore’s manuscript would be used in The Pencil of Nature and the poet complied: “You have hit upon the very thing – at least as far as I am concerned.  New things (at least professing to be new) are sure to be carped at, and this it was – the fear and consciousness of this – that paralyzed every effort I made to do something for you.  But this new suggestion of yours removes every difficulty and I shall now have all the honour and glory of being solarized in your company without being at the same time criticised for my ‘parts of speech.’ Let me know if it is any particular kind of paper I must (certainly not the kind I am writing on now) that I must transcribe the two Melodies upon.” 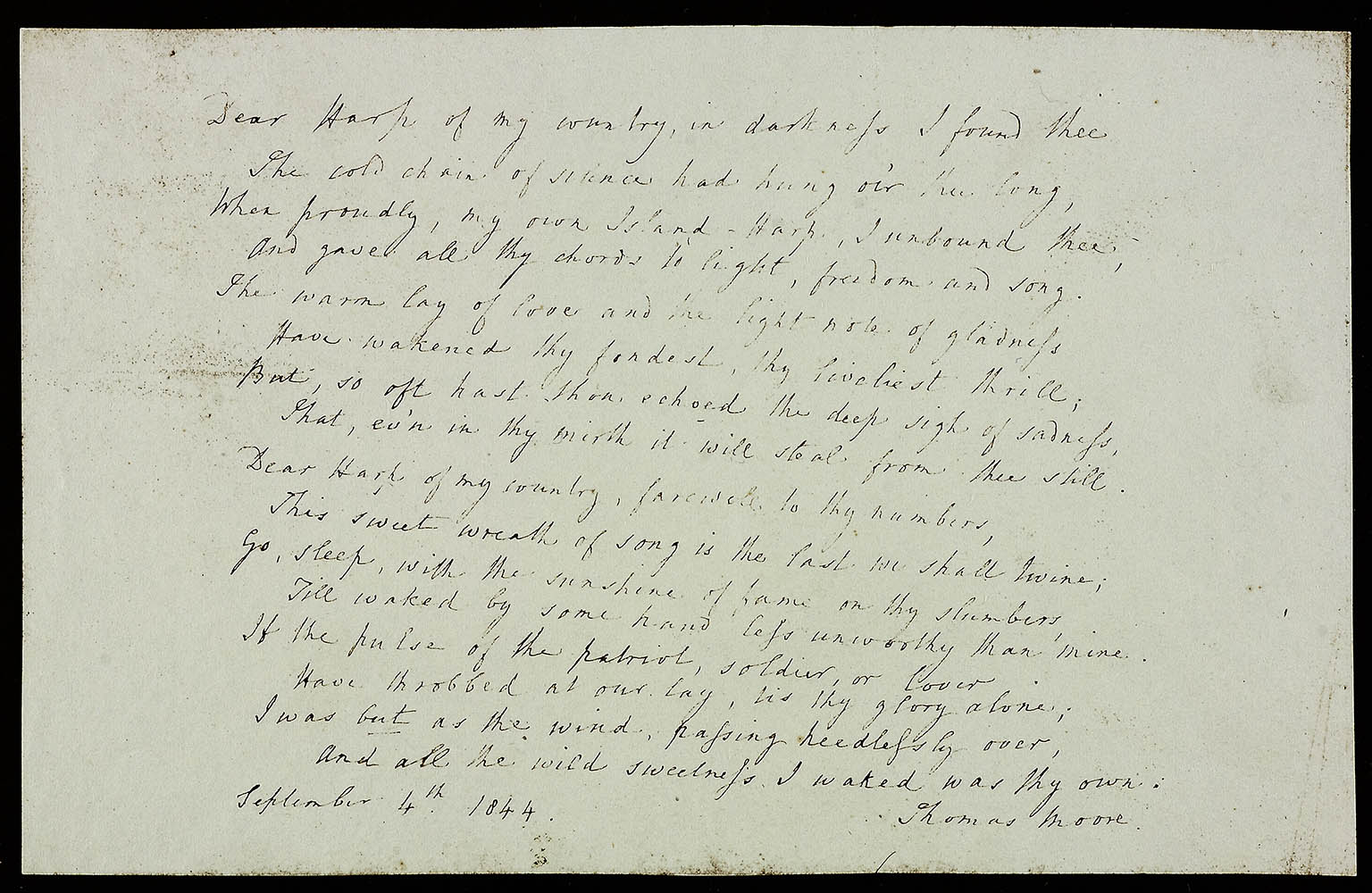 Talbot’s beautiful The Pencil of Nature was tragically ahead of its time, another example of where his reach exceeded his grasp, and publication was ceased just short of the halfway mark.  The manuscript poem that had caused Moore so much angst was among the plates yet to be published.  But his efforts did not go to waste. As previously discussed, Nicolaas Henneman had sheets of labels printed up – the appropriate one would be cut off and attached to a print sold through his establishments at Reading and in London.

In the case of the ‘Fac-simile of the Handwriting of Moore’ there were two numbered labels.  One of the variants of the above image was probably selected.  For speculations on the second one, we shall have to wait until next week’s posting: Thomas Moore & the Ladies of Lacock.