Readers may recall that a few months ago I posted some observations and musings about Nicolaas Henneman’s printing operation that he had set up at Kensal Green, just outside London and its heavily polluted air and enfeebled sunlight.  Amazingly, the architectural plans for modifying Monument House in the early 1850s survive, revealing an unusual configuration with a sharply sloped side at the left.  The precise location of the house continued to remain a mystery. 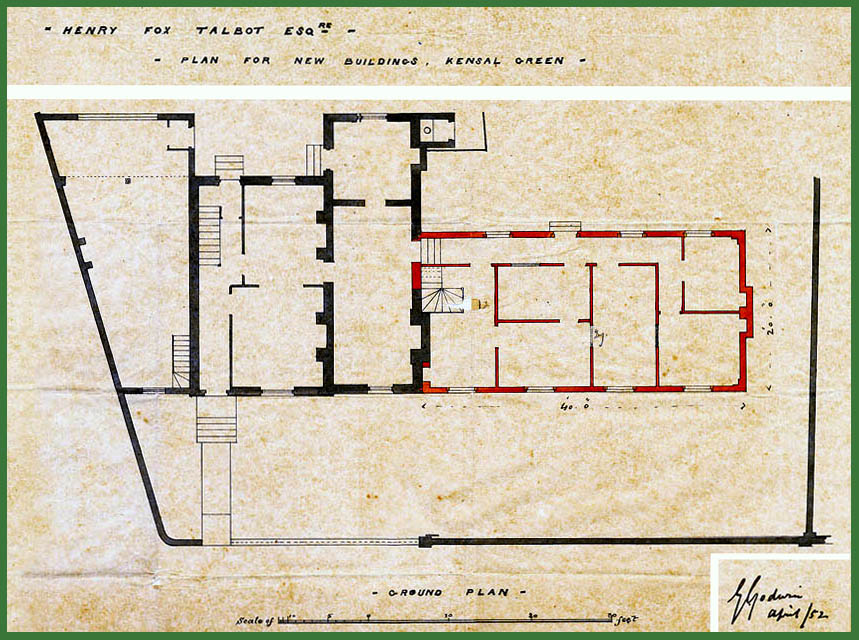 In a wonderful example of crowd sourcing (leading to our first award of a half-price blog subscription), I heard from Gerry Mellett.  In his own words:

A relation has just sent me a link to your very interesting blog on Nicolaas Henneman’s connections with the area as his location for a planned photographic ‘manufactory’.  I grew up in Kensal Green (Pember Road) and the plan of the house that was purchased for conversion I found interesting as it immediately reminded me of a house in which a childhood friend of mine lived and which I consequently visited quite a bit in the sixties. The trigger for me was the diagonal left hand side of the house. My friend’s family only occupied the ground floor and semi-basement of the house, so the steps up to the front door in the plan are also reminiscent. There are also steps leading out to the back yard of the house, which was originally a stable yard. So, the floor plan looks very similar to my friend’s home, but – minus the extension. I suppose it’s quite possible the extension could have been demolished some time after 1857 as it may have been unsuitable for domestic accommodation. However, it may also have been demolished to make way for further development, as there is a now a road (Berens Road) on the right hand side of the house and it is quite apparent that the exposed flank of the house also closely resembles the plan of the original building, with protrusions for the fireplaces and stack. I obviously have no proof whatsoever that this was indeed the original location of the Henneman factory but, to my knowledge, there is no other building on the Harrow Rd at Kensal Green that resembles the surviving plan. The house still exists and the address is 818 Harrow Rd, NW10 5JU.

Upon receiving this, I couldn’t resist the urge to immediately hop on my Google Earth Magic Carpet and was instantly transported from the editorial offices at Rock House in Baltimore to Harrow Road, some 3500 miles away. 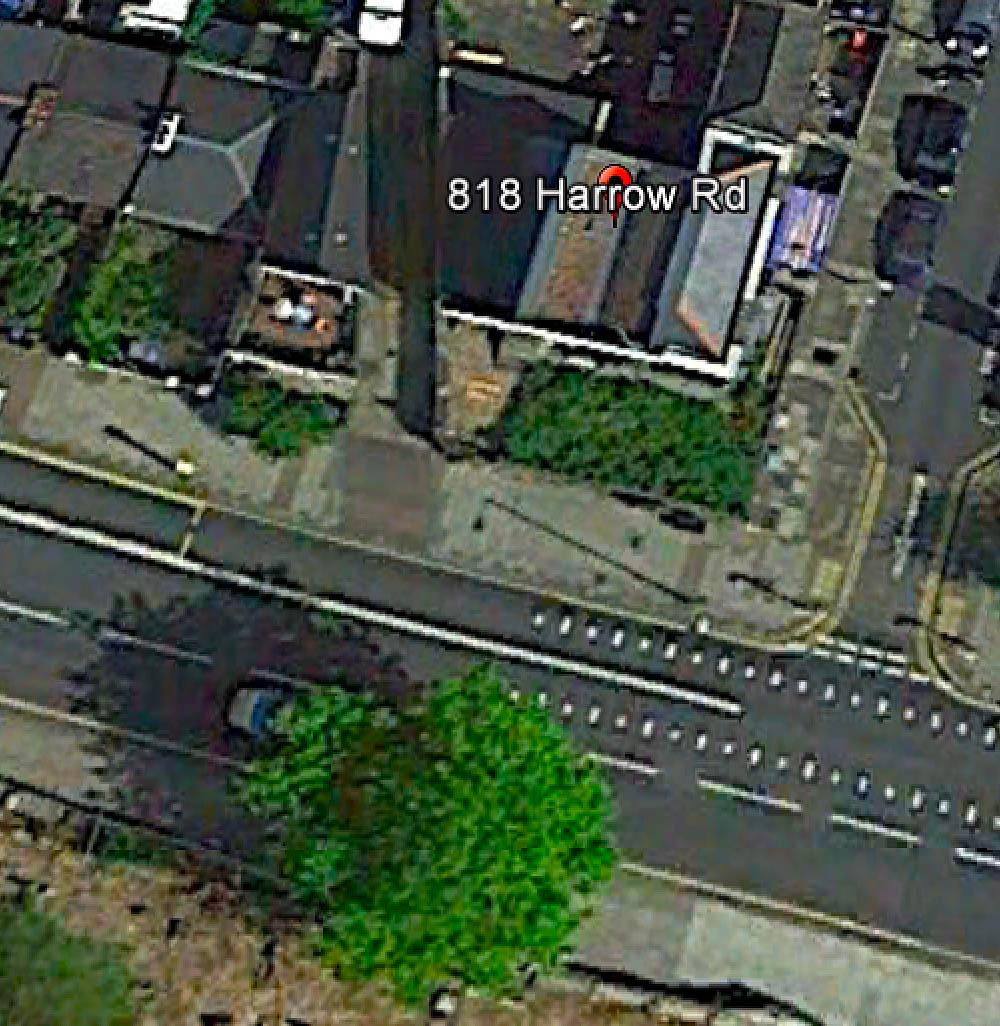 Using my Virtual Google Drone, a careful examination of the entire area confirmed Mr Mellett’s observation that this was the only building with such a configuration anywhere along the road.  I finally had a chance for a site visit recently. 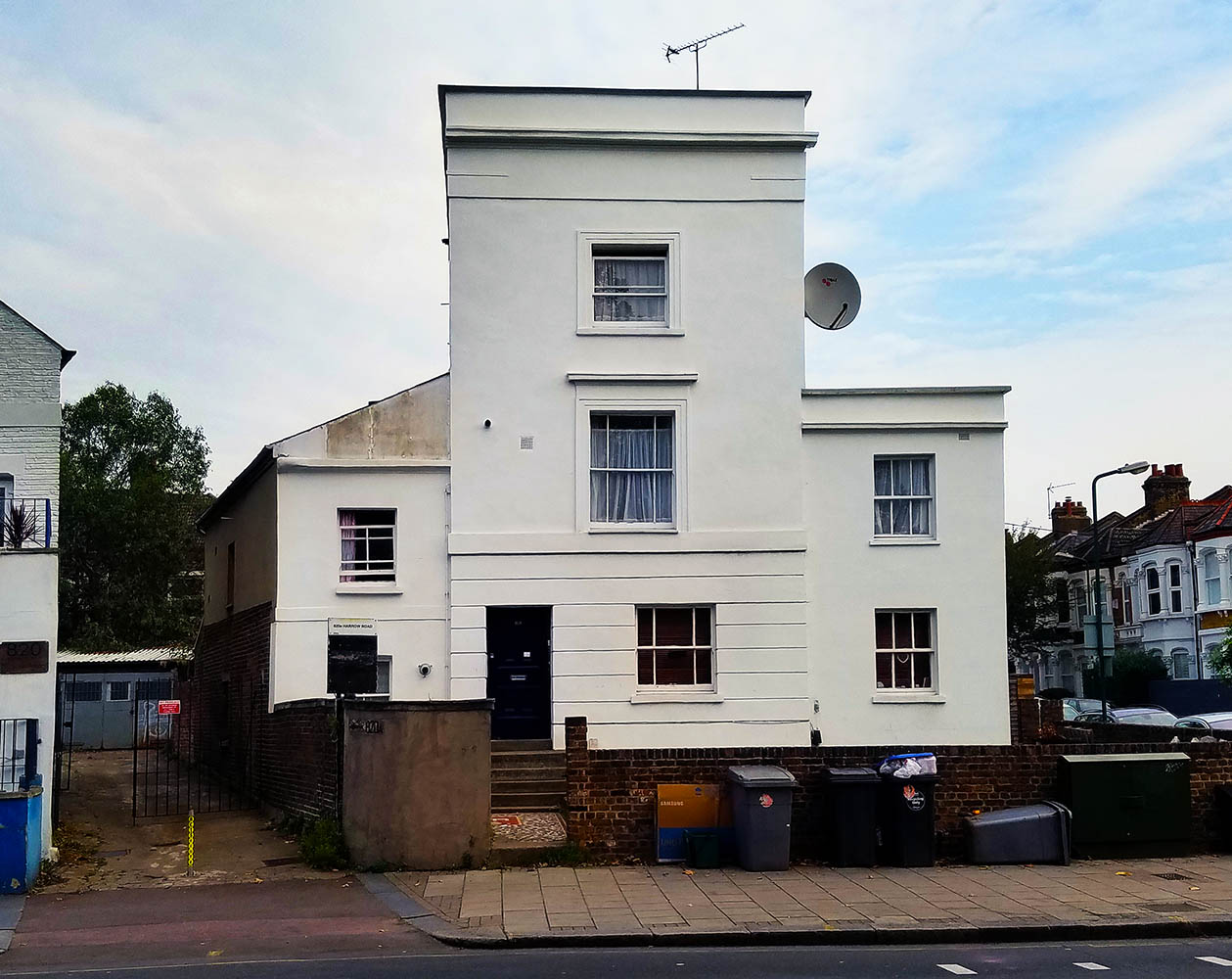 Mr Mellett cautions that this is only an assumption – of course there might have been other such buildings long ago demolished – but the fit is perfect.  Was the central tower original?  Could that be why it was called Monument House before Henneman acquired it?  I had raised the tentative possibility that Monument House was somehow connected with the main entrance to Kensal Green Cemetary, at the Eastern end near what is now called Lisson Grove.  However, 818 Harrow Road was much to the West, closer to the station of the London & North-Western Railway, which would have provided a convenient link to Euston Station for Henneman to transport his cameras and supplies. 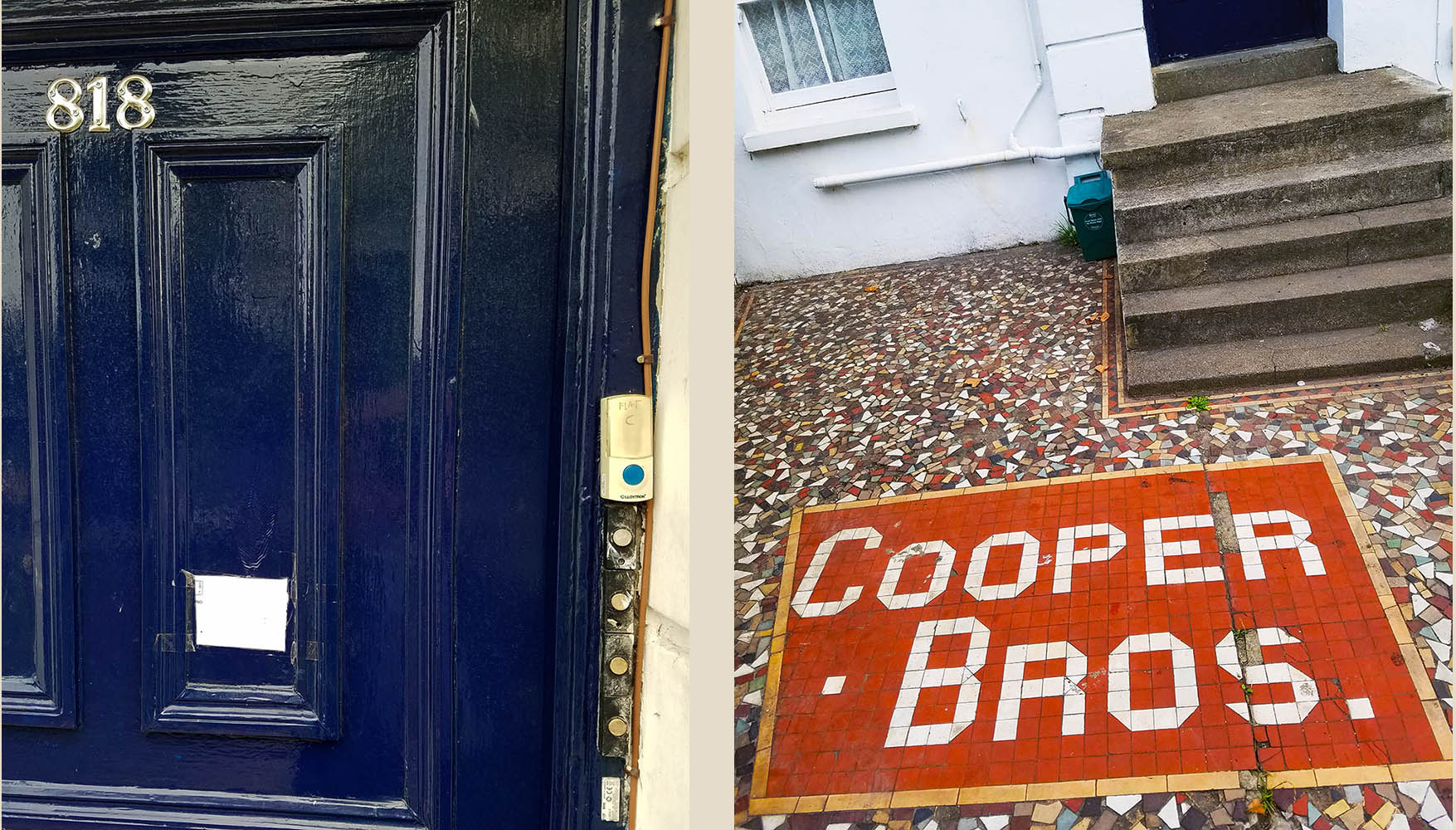 Approaching the front door, the string of doorbells betrayed its current use as a rental property, which led me to the hope that at least somebody would be home.  Sadly, none of the curtains twitched during my visit.  The front steps testify to intermediate uses which might be researched.  I am hoping that somebody familiar with the Kensal Green area can add to Mr Mellett’s childhood recollections. 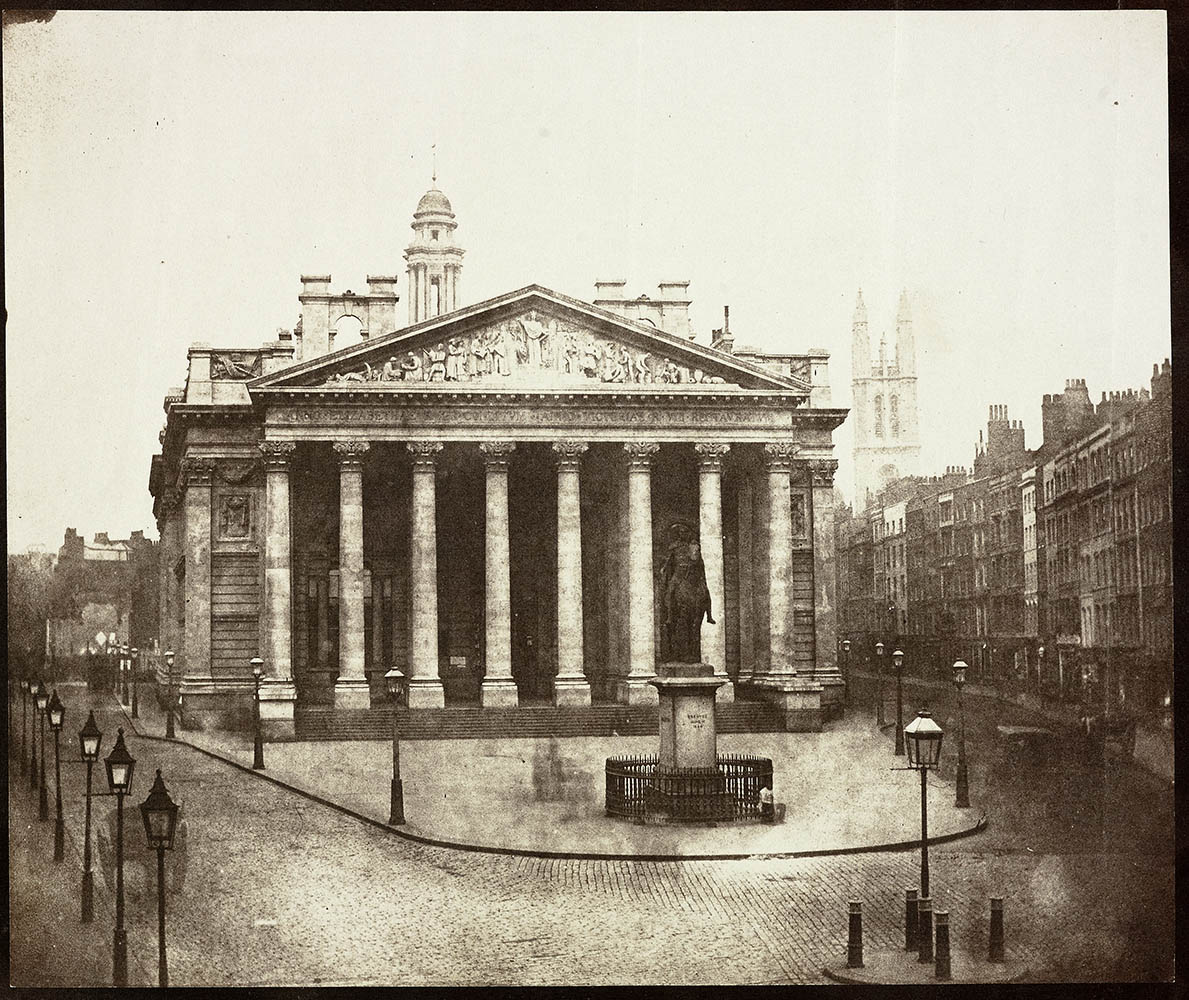 With all the economic and political uncertainty that troubles our souls these days, perhaps it will be refreshing to look back upon Talbot’s point of view of progress in 1844.  The Royal Exchange – ‘The Heart of the Empire’ –  had recently been completed.  Just before its official opening in June 1844, the statue of Arthur Wellesley, 1st Duke of Wellington was unveiled.  Ceremonially, its bronze came from melted down enemy cannons captured during Wellington’s continental campaigns.  At the time the nearly-completed building was opened by Queen Victoria on 28 October 1844, Talbot was just returning from his sojourn to photograph the plates for his forthcoming Sun Pictures in Scotland.   He must have taken this photograph not long after (none of his three negatives of the Exchange is positively dated).

It was the brilliant economist Sir Thomas Gresham (also a founder of the Royal Society) who established the original Exchange.  Consumed in the Great London Fire of 1666, it was immediately replaced.  Another rapidly spreading fire destroyed its successor at the start of 1838.  So important was its function that work was undertaken immediately on a replacement.  Now hemmed in by other buildings, the trapezoidal site presented challenges that were overcome by a a rather cavalier attitude towards the hasty excavation of Roman ruins discovered underneath Wren’s distinctive St. Michael’s Crooked Lane Church. Prince Albert laid the foundation stone early in 1842.

In defining an emerging urban space, Talbot’s framing was generous, maintaining the sense of space as well as he could through the use of a wide angle lens.  In the distance on the right is one of Wren’s Gothic style churches, St. Michael’s, Cornhill, built after the Great London Fire.

Today, the Royal Exchange building suffers from the effects of the very commerce that it was meant to foster.  The heavily symbolic building, enhanced by Richard Westmacott’s Tympanum on the pediment, is all but swallowed in the canyons of towering modern buildings.  A NatWest bank edifice now occupies the spot where Talbot placed his camera. He went above street level in one of the late Georgian houses then on the corner of Princes and Poultry Street.  One would have to mount the dangerously curved top of a London Tube entrance to replicate Talbot’s point of view.

Curiously, for a photograph totally lacking in people Talbot’s image is teeming with life.  The then-common gaslamps march down either side of the street, drawing us further into the scene.  The winter or early spring sunlight was feeble, perhaps weakened further by smog, so even with the improved sensitivity of the calotype negative process a prolonged exposure was required.  Was it two or three minutes on an overcast day like this?  Ghostly traces of some cabs and some hurried financial types appear, standing in for the shadows that would have defined the scene on a sunnier day.  Echoing Daguerre’s famous picture of the Boulevard du Temple showing a man getting his shoe shined, the man seated in front of Wellington is fairly well assembled. 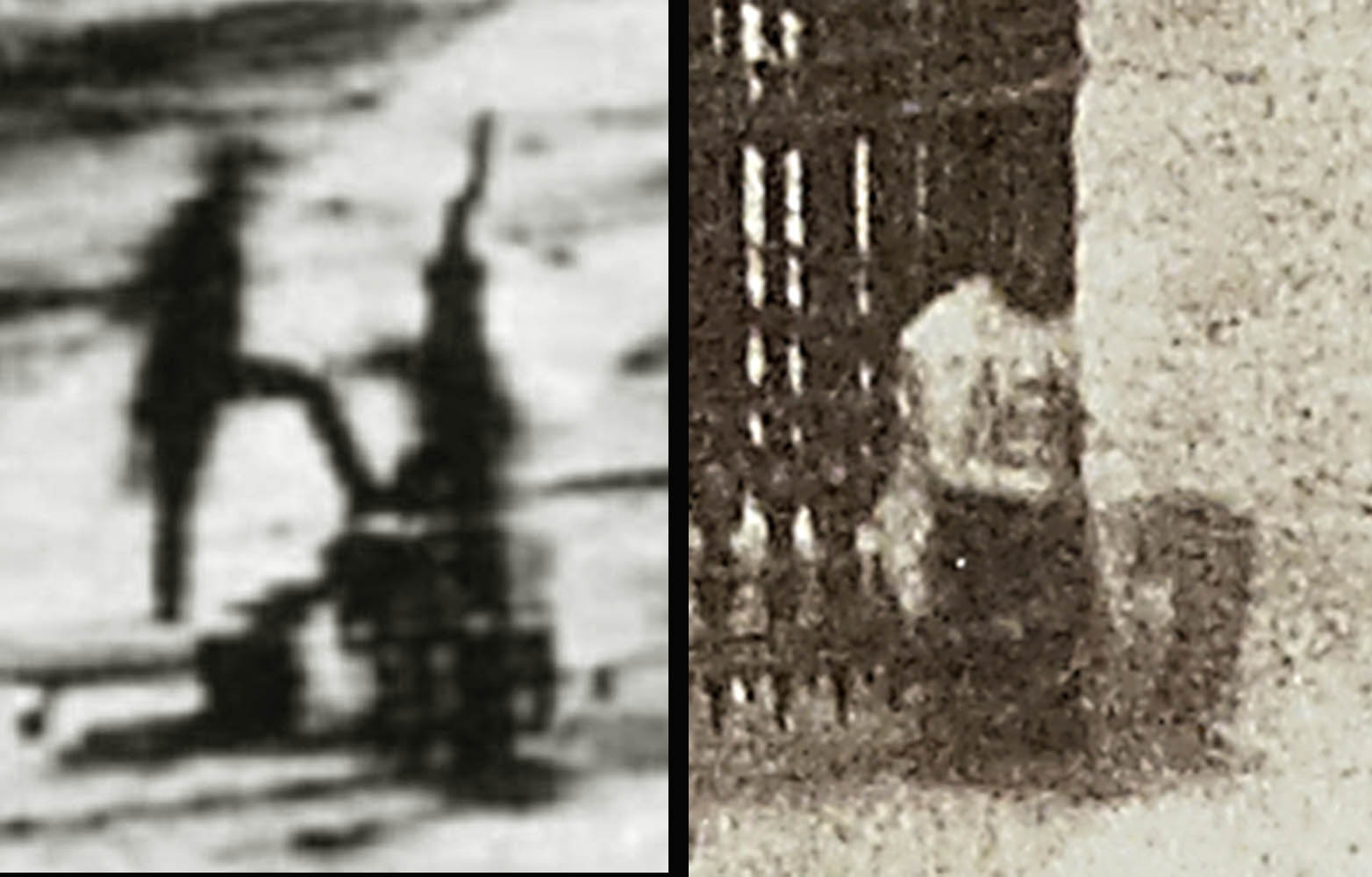 Today such figures are once again ghosts.  With its critical functions succumbing to computer trading, The Royal Exchange now promotes a different type of commerce.  It has been converted to a high-end shopping mall.  What would Talbot have made of that?