On Monday of this week – the 5th of October in 1833 – the art of photography was conceived.  It was an idea born out of frustration. The precocious and highly accomplished Henry Talbot had mastered nearly everything that had crossed his path in life:  all sorts of languages, scientific and mathematical subjects, political skills and even to some extent handling his mother, Lady Elisabeth.  However, he could not draw.  In a story already familiar to many of our readers, Henry was on an extended Continental tour with his wife during the latter half of 1833 (a first for her, but rather too late for the commonly held notion that it was their honeymoon).  Joined in the Italian Lake Como village of Belaggio by his sister and some other relatives, Henry Talbot found himself to be the only one who could not draw.  We must remember that this was in the days before the ubiquitous mobile phone cameras, indeed it was before photography, digital or analogue, had been invented.  Landscapes and the built environment, portraits and selfies, all had to be either kept in memory or recorded with a pencil.  Perhaps embarrassed in front of his new wife and his relatives, Henry appealed to science and technology to make his visual efforts more respectable.

As he related in his ‘Introductory Comments’ to his 1844 The Pencil of Nature, “One of the first days of the month of October 1833, I was amusing myself on the lovely shores of the Lake of Como, in Italy, taking sketches with Wollaston’s Camera Lucida….” 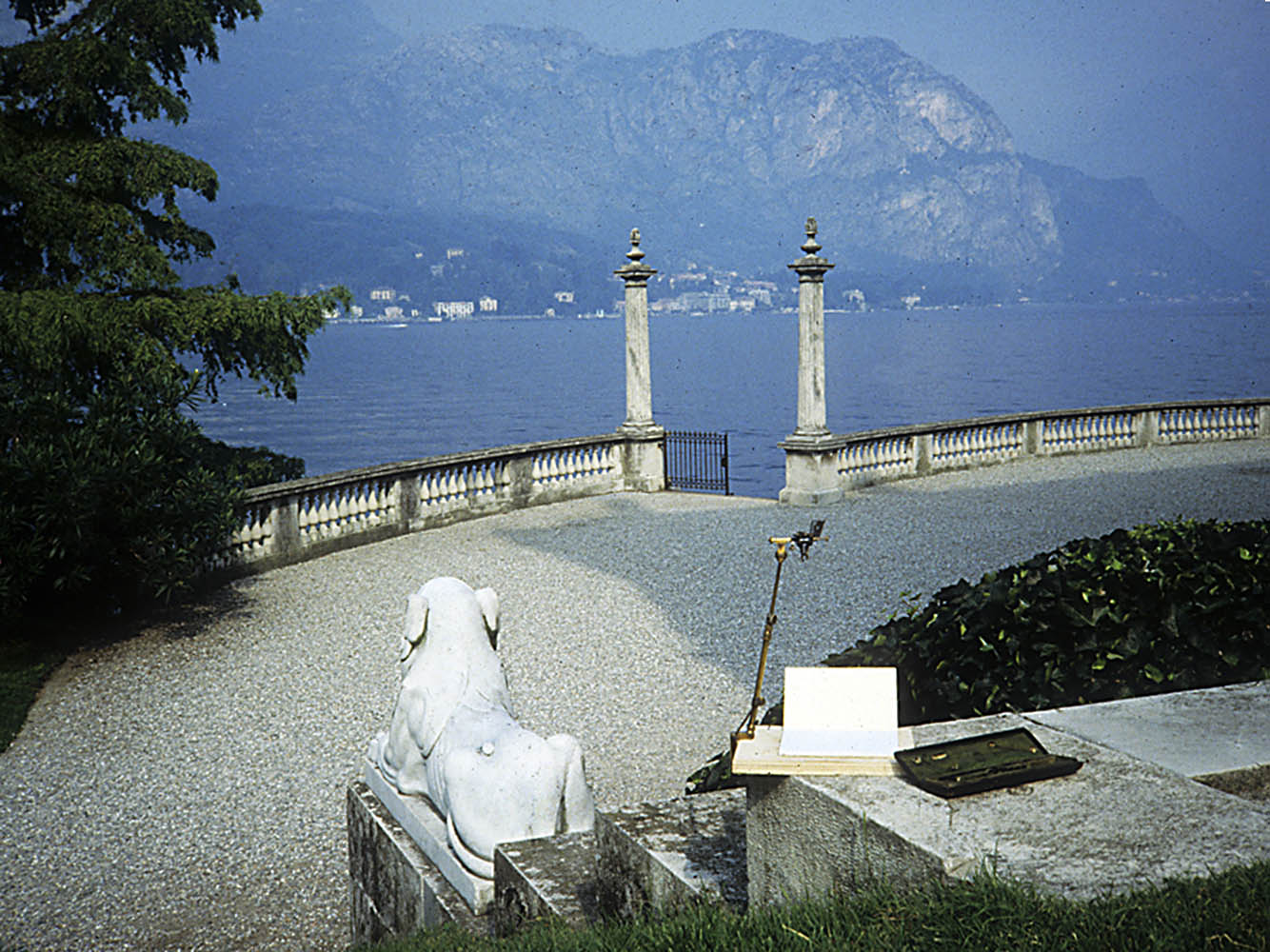 For those who have not tangled with a camera lucida, you might consider counting yourself as more fortunate than deprived.  William Hyde Wollaston’s invention was deceptively simple.  As its name implies, it was a ‘room of light’ used in the open air.  A small prism perched at the top of an extendable brass tube magically made the world appear on your drawing paper.  All you had to do was to take out your pencil and follow the lines. My wife Elizabeth’s camera lucida is here mounted on her portable drawing block at Villa Melzi, a scene that has changed remarkably little over the years.  She can draw.  I cannot.  I can explain the workings of the instrument fully.  I can even build one.  But I cannot draw and this little device cannot save me.  In this respect, I am channeling Henry Talbot.

Talbot’s first efforts hinted at the power of the instrument.  He made a reasonably good rendition of the outline of a leaf, embellished with possibly some architectural or landscape hints at the bottom.  On the right is a rudimentary view of the tiny village of Bellagio, marching from the lake up a steep hillside.  The camera lucida’s facility with perspective is demonstrated here but the lines are very tentative and the image Spartan at best.  The view of Bellagio is from the seaside Villa Melzi, just a short walk south of the village.  And it was at the Villa that Henry Talbot was to conceive of his new art. 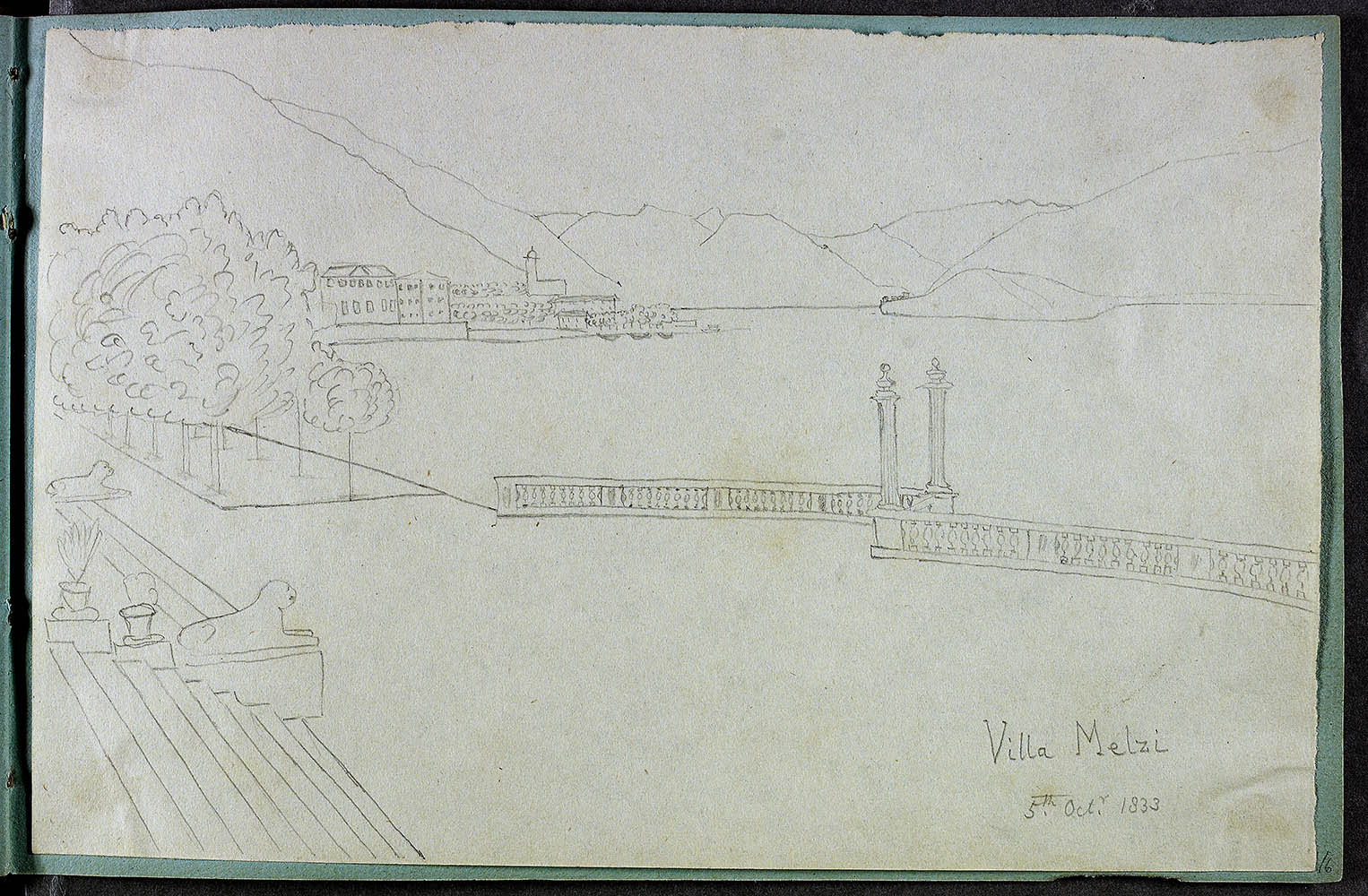 This well known drawing of the boat landing for Villa Melzi was titled and dated by Talbot 5 October 1833.  I have no proof of this but I have always fervently believed that it was this very drawing that goaded Henry into conceiving of his great accomplishment.  While it is perhaps the finest bit of draughtsmanship that he ever achieved, its shortcomings make it clear why he had to invent photography.  As he continued his narrative in The Pencil of Nature, Talbot lamented “or rather I should say, attempting to take them: but with the smallest possible amount of success.  For when the eye was removed from the prism – in which all looked beautiful – I found that the faithless pencil had only left traces on the paper melancholy to behold.  After various fruitless attempts, I laid aside the instrument and came to the conclusion that its use required a previous knowledge of drawing, which unfortunately I did not possess.” 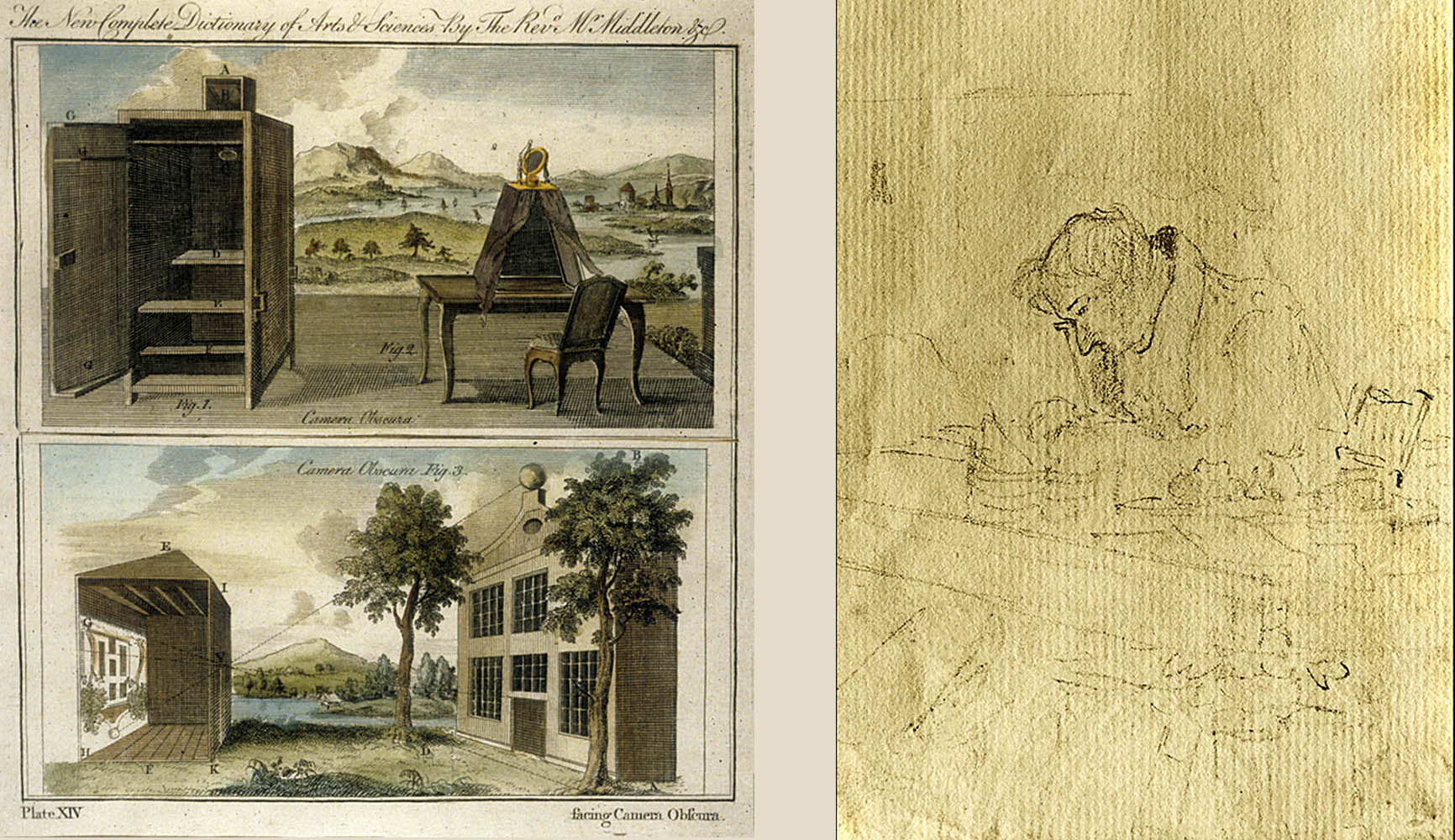 The camera lucida operated on a very simple principle.  The prism was positioned over the drawing paper and your eye lowered to its edge.  Slowly drawingg your pupil over the edge of the prism, you moved until half your pupil saw the image in the prism and half looked beyond to the paper (an aperture in a swinging paddle was a crutch for the newcomer).  When everything was just right, the image of nature in the prism and the view of the paper were fused in your brain, yielding an apparent ethereal scene displayed on your paper.  You could then trace it.  There was no projected image – somebody standing beside you would see nothing – it was all in your head.  But Talbot still had no idea how to reduce the colourfull three dimensional world into monochromatic lines on a flat surface (that is the problem that I have).

Talbot then harkened back to his earlier use of the much older invention of the camera obscura.  Originally a ‘room of darkness,’ it long ago had been reduced to the size of a shoebox.  Its lens projected an actual image.  Talbot recalled that “this led me to reflect on the inimitable beauty of the pictures of nature’s painting which the glass lens of the Camera throws upon the paper in its focus – fairy pictures, creations of a moment, and destined as rapidly to fade away.  It was during these thoughts that the idea occurred to me . . . . how charming it would be if it were possible to cause these natural images to imprint themselves durably, and remain fixed upon the paper!”

And it was here that Henry’s imagination took another giant leap:  “and why should it not be possible? I asked myself.  The picture, divested of the ideas which accompany it, and considered only in its ultimate nature, is but a succession or variety of stronger lights thrown upon one part of the paper, and of deeper shadows in another.  Now Light, where it exists, can exert an action, and, in certain circumstances, does exert one sufficient to cause changes in material bodies.  Suppose, then, such an action could be exerted on the paper; and suppose the paper could be visibly changed by it.  In that case surely some effect must result having a general resemblance to the cause which produced it: so that the variegated sense of light and shade might leave its image or impression behind, stronger or weaker on different parts of the paper according to the strength or weakness of the light which had acted there.”

And that is the essence of photography. 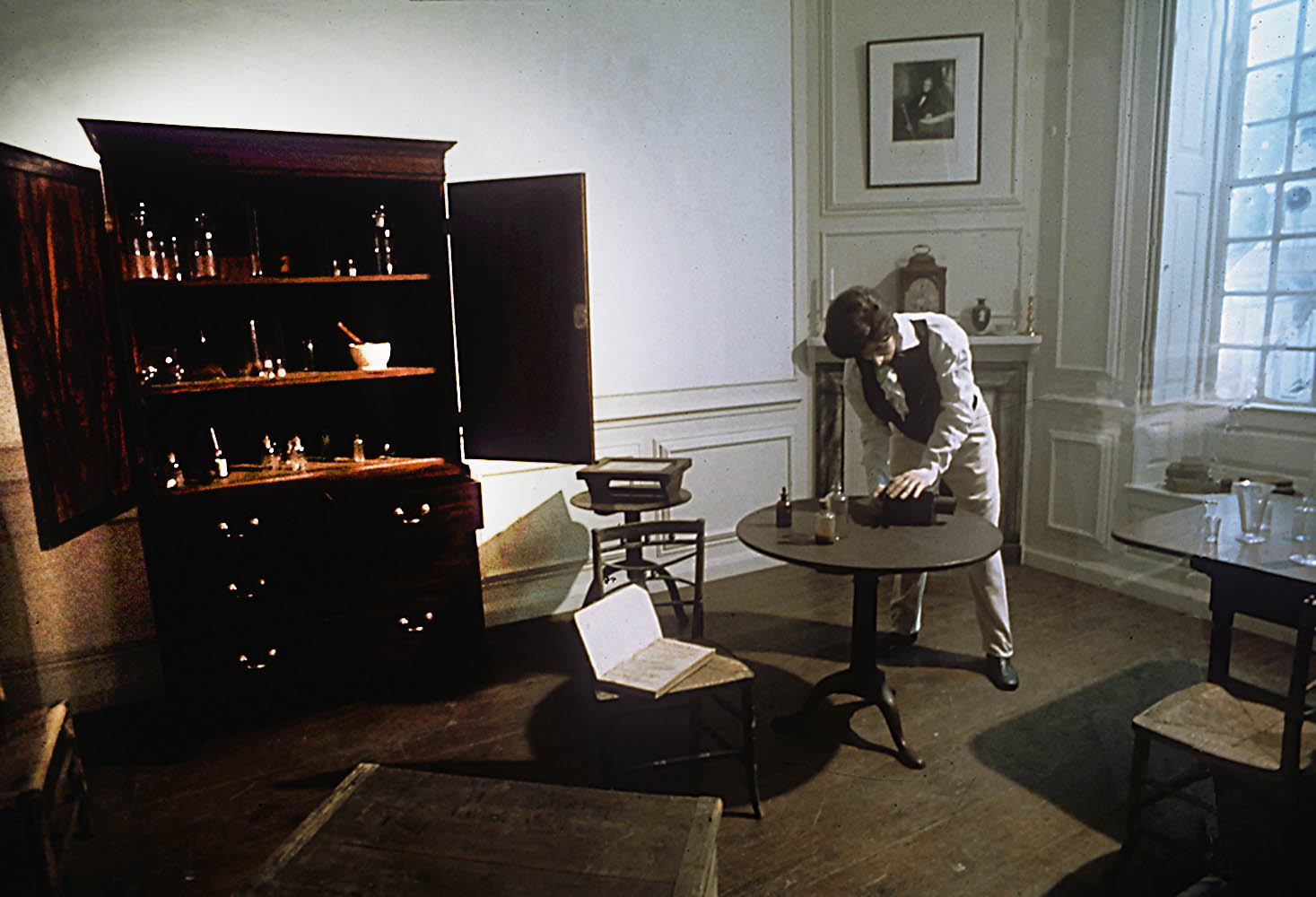 Talbot had neither chemicals nor undistracted time while he was travelling in the group and when he returned to Lacock Abbey at the end of 1833 he was immediately plunged into his duties as a Member of Parliament.  Sometime in the spring of 1834 he put his Lake Como musings to the test.  He began to experiment with the salts of silver, known to be light sensitive, applied to common drawing paper. 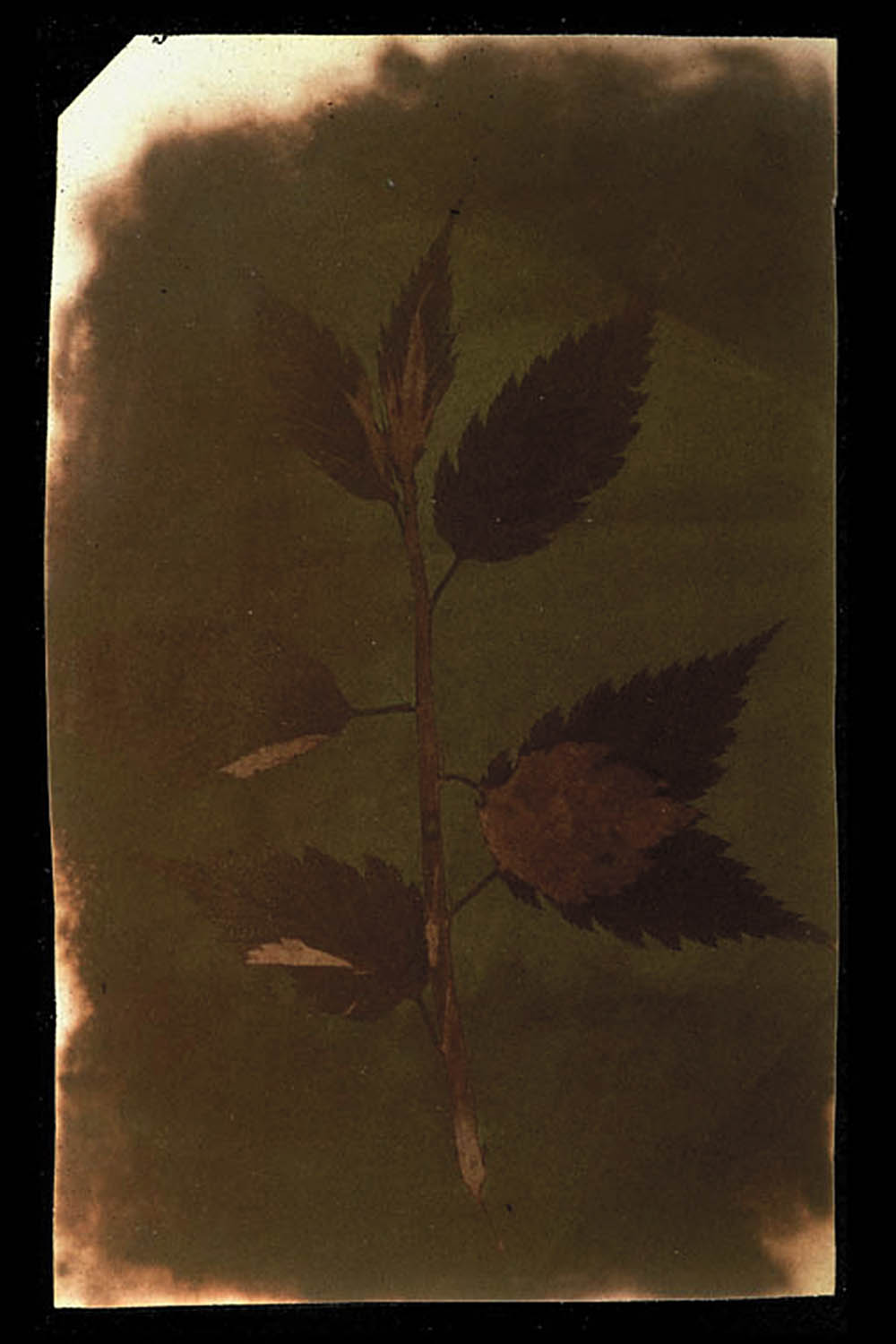 Although Talbot left us some contemporaneous notes, we don’t have a really detailed record of exactly how quickly he advanced, but it could not have been long before he achieved results by placing objects such as plants or lace on his sensitive paper and exposing this to sunlight.  The solar energy reduced the silver salts to small particles of metallic silver, creating an image.  He privately called these Skiagraphs, depictions formed of shadows.  But he just as quickly encountered the Achilles’ heel that had stymied previous inventors such as Thomas Wedgwood.  The light sensitive salts remained in the paper and the nascent image was literally destroyed by the light required to view it.  That might be a treat for a modern conceptual artist but for one trying to make a permanent drawing it was fatal.  One can imagine Talbot’s disappointment as nature’s beauty was plunged into overall darkness.

In the midst of this Stygian gloom, Henry Talbot’s keen botanical eye came to the rescue.  He had been trained to observe the slightest differences in specimens of plants.  As related in an earlier post, Talbot had resorted to a two-step process to sensitize his paper and that seeming complication in procedure opened the path to a breakthrough.  Silver nitrate was readily soluble in water but was not very sensitive to light.  Silver chloride could be exquisitely sensitive but was not soluble – it precipitated out of solution immediately.  So Talbot first coated his drawing paper with a solution of ordinary table salt and dried it.  He then brushed over silver nitrate, which reacted with the salt and precipitated particles of light sensitive silver chloride that were immediately trapped within the fibers of the paper.

Talbot’s eye must have been caught by an image that looked something like the above.  He noticed that the edges darkened during viewing while the center remained clear.  From this, he deduced that the difference resulted from accidental variances in the ratio between the table salt and the silver nitrate.  Counterintuitvely, a weak solution of salt produced a very sensitive silver chloride, whereas a more concentrated amount of salt greatly reduced this sensitivity.  He first made his exposure using a highly dilute table salt solution.  After the image formed, he plunged it into a very strong saline solution which altered the state of the remaining silver chloride.  Talbot had discovered a way to stabilize his images, so much so that some of these precious early results have survived for nearly two centuries.

But the real magic for me had its origins 183 years ago this week, when Henry Talbot’s fertile imagination turned his frustration at drawing into the idea for photography.

• Questions or Comments? Please contact Prof Schaaf directly at larry.schaaf@bodleian.ox.ac.uk  • I have shamelessly appropriated the title of one of my own books for this blog:  Tracings of Light: Sir John Herschel & the Camera Lucida (San Francisco: The Friends of Photography, 1989).  It illustrates Sir John Herschel’s mastery of the very instrument that frustrated Talbot.  Another point of view on this, showcasing Maggie Herschel’s critical contribution of colouring, is Brian Warner’s and John Rourke’s Flora Herscheliana: Sir John and Lady Herschel at the Cape, 1834 to 1838 (Houghton, South Africa: The Brentwood Press, 1996).  • The view of Elizabeth’s ca. 1810 Cary camera lucida was taken at Villa Melzi, outside Bellagio, during one of our visits to the great Verona printer Martino Mardersteig sometime in the 1980s.   •  WHFT, Leaf and Bellagio, camera lucida drawings, pencil on paper, October 1833, Talbot Collection, National Media Museum, Bradford, 1937-2537/2 and 1937-2537/7.  •  WHFT, Villa Melzi, camera lucida drawing, pencil on paper, 5 October 1833, Talbot Collection, National Media Museum, Bradford, 1937-2537/4. • Camera obscuræ from Gottfried Erich Rosenthal, Die Naturliche Magic (Berlin: Friedrich Nicolai, 1798).  The camera lucida illustration is from an 1826 scrapbook compiled by Henry’s cousin Emma Thomasina Talbot and probably depicts a relative; it is in a private collection.   •  I took the picture of the Smithsonian’s diorama around 1973, about a year after it was installed using some original furniture purchased from Lacock Abbey; tragically, it was dismantled and put into apparently permanent storage in 1992.  • WHFT, Botanical specimen, possibly Hornbeam, photogenic drawing negative, ca. 1839, the J Paul Getty Museum, 85.XM.150.12, Schaaf 3419. •  WHFT, Specimen of Lace, photogenic drawing negative, likely summer 1839, National Media Museum, Bradford, 1937-1579, Schaaf 5044.  The ‘W’ inscription indicates that this was made on Henry’s ‘Waterloo’ paper, first mentioned by him  in July 1839.  See my Records of the Dawn of Photography: Talbot’s Notebooks P & Q (Cambridge: Cambridge University Press, 1996).