While no secret, perhaps it is not so well known that Henry Talbot was a Member of the First Reform Parliament at the very same time that he was creating the art of photography.  In December 1832 Talbot was elected to Westminster as a Whig MP.  Occurring just ten days before his marriage to Constance Mundy, this delayed his present of a Continental tour, the first for her.  So Talbot was both a recently married man and a Member of Parliament (MP) when he set out with Constance for a six month tour of the Continent in June 1833.  The trip would lead him to the shores of Lake Como in October 1833 and hence to his inspiration for photography.

Politics was brought to mind by a seemingly pedestrian photograph of Talbot’s that recently caught my eye.  It immediately reminded me of the current situation in British politics and in turn suggested the title of this post.  It is a photographic copy of the 1831 satirical lithograph ‘Leap frog down Constitution Hill,’  by the artist and political cartoonist known as HB (John Doyle, 1797-1868). If dates could be taken at face value it might look as if the photograph pre-dated not only Talbot’s political career but also his first thought of photography. 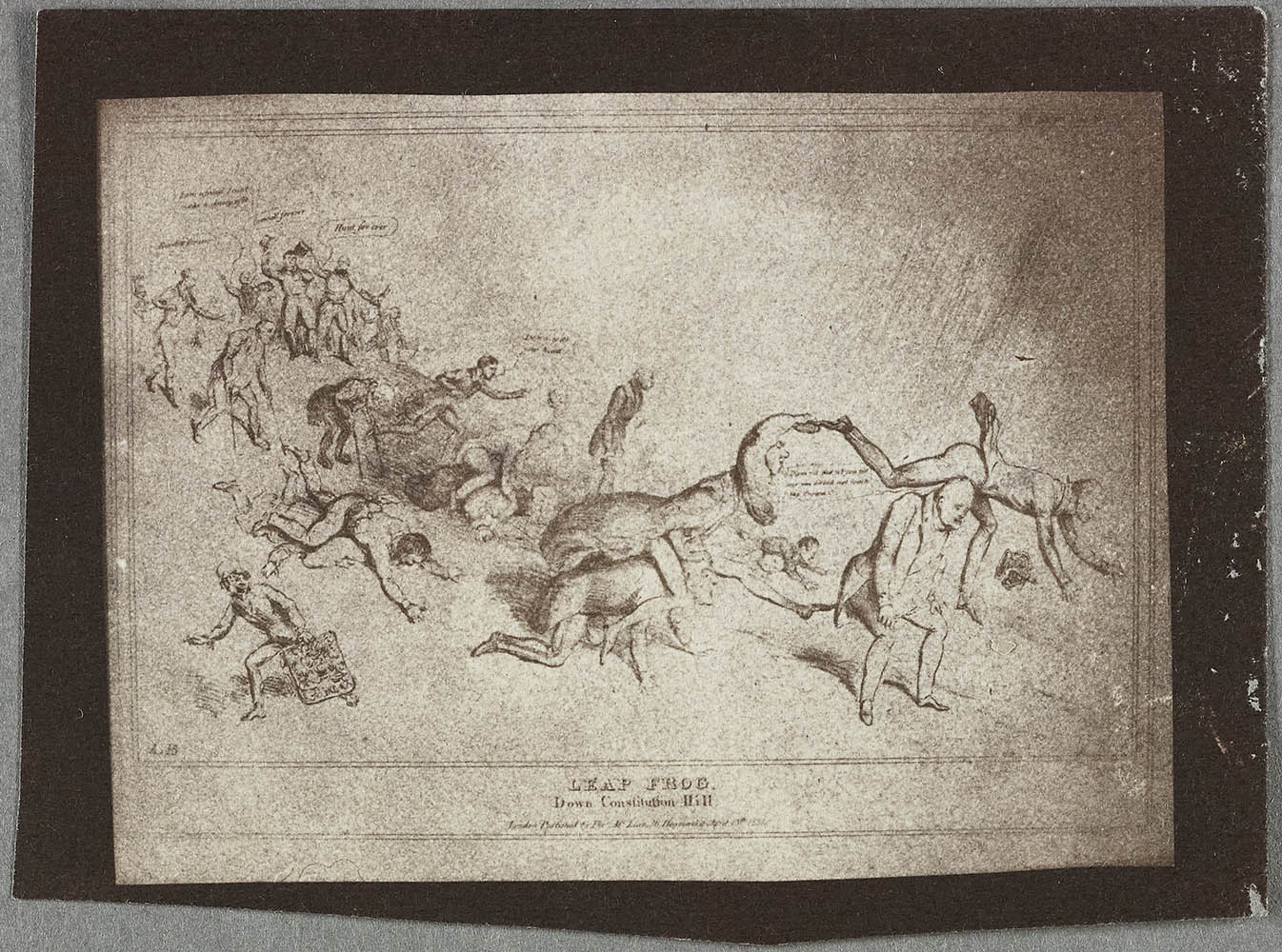 We don’t know precisely when Talbot made his photographic copy of this 1831 lithograph although it must have been the better part of a decade after its publication.  Clearly for Talbot to have kept the original so many years and then go to the trouble of copying it photographically implies that it had some special significance for him.  But this small photograph is important because it relates directly to the reason why Talbot entered politics and illuminates the political landscape of the period.  Talbot’s photographic copy of the lithograph is very much smaller than the original (more on that it a moment) but luckily amongst the myriad treasures of the Bodleian Library is an original Leap Frog lithograph. 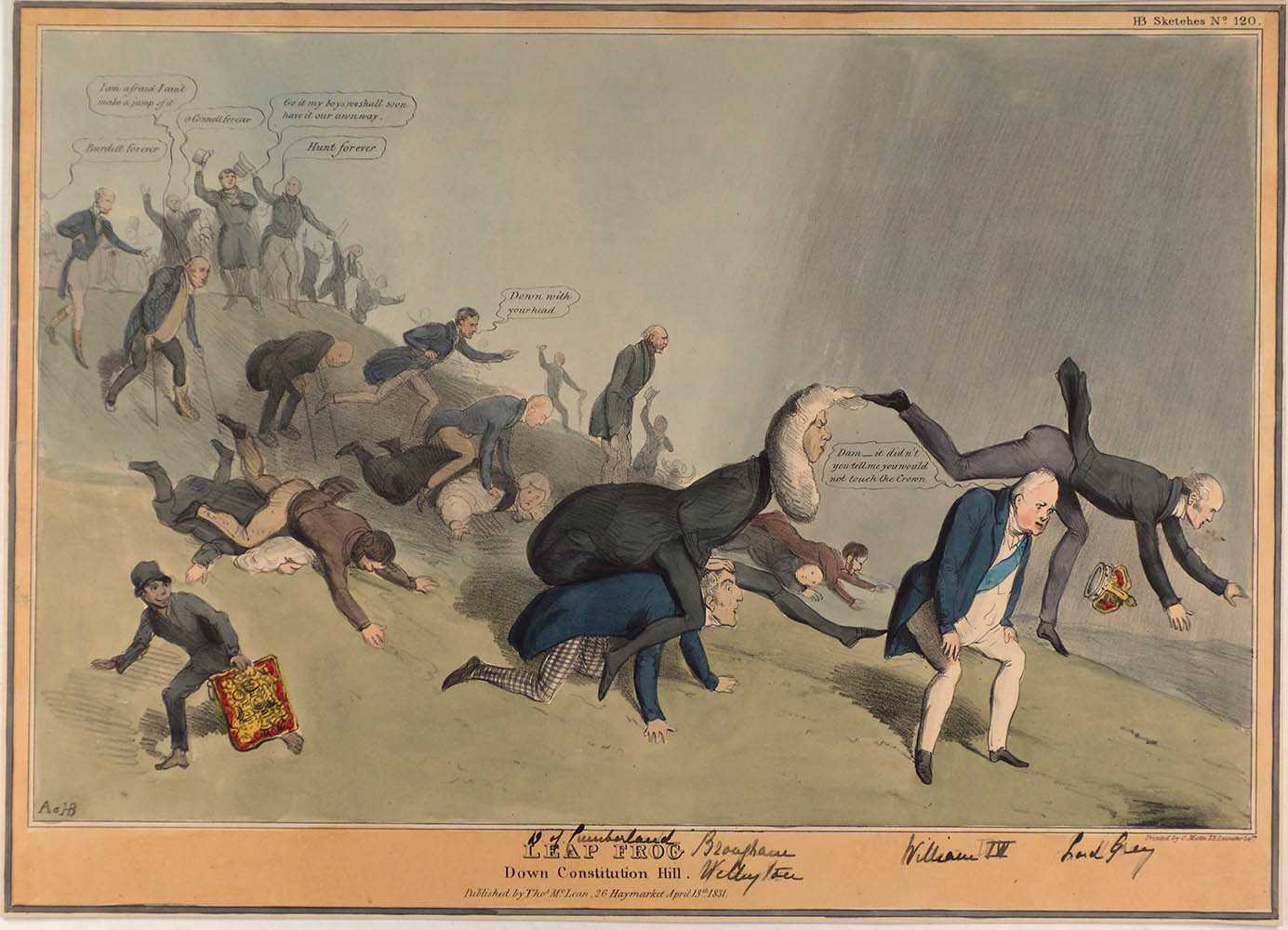 Nineteenth-century Britain had a long tradition of ridiculing prominent people through prints such as this.  Indeed, one of the results of The Glorious Revolution of 1688, which limited the power of the monarchy in favour of parliament, was a remarkable freedom of expression for the makers and publishers of satirical images.  As a result, nobody had immunity from the ire of the satirical artist, including the monarch.  While we don’t know how much Talbot may have personally enjoyed the regular and graphic lampooning of prominent people, we can be sure that he would have been familiar with a tradition so commonplace in the popular culture at the time.  So why, of all the political cartoons that Talbot must have seen over the years did he treasure a copy of this particular one and then photographically copy it years later?

For a start the lithograph is about the clamour for political or parliamentary reform in Britain at a time when Talbot was playing an active role as landowner and member of the privileged classes.  The lithograph depicts what looks like a dangerous downhill race with frenzied figures leaping over one another, exclaiming as they go.  In their day the men depicted in the lithograph would have been easily recognizable figures of the establishment (no women were necessary in the spectacle as they were disenfranchised at the time). The undignified sight of King William IV having his crown knocked off his head by the then Whig prime minister, Charles Grey, the 2nd Earl Grey is prominent in the composition.  After years in the political wilderness Grey had returned the Whigs to power with a pledge to bring in parliamentary reform – hence his place as the most conspicuous leaping frog.  Alongside the monarch and the prime minister, all but two of the identifiable figures are MPs and tellingly for 1830 all but two were titled aristocrats.  The strong political theme of the lithograph is hard to miss.

In 1830 Talbot was fully occupied with personal responsibilities of running his ancestral estate in Wiltshire, and although Lacock was some way away from the goings on of parliament and the capital he was not fully removed from them.  In addition to what he would have read in the press his family in London frequently sent him politically charged letters.  The unavoidable satirical cartoons of the day, like our leap frog lithograph, also conveyed elements of news. As a Whig with liberal leanings Talbot sympathized with the political message of Leap Frog.  From an early age Henry Talbot had been politically aware.  He was unusually attuned to how politics affected the daily lives and livelihoods of all those who lived and worked for him on the estate and in the village of Lacock.  He clearly took their welfare seriously and as a result seems to have been well-liked by those he was responsible for – even if he might not go quite so far as to say they should all be given the vote, but Talbot certainly believed that more people should be enfranchised than were at the time.

His feelings of responsibility were perhaps heightened by the fact that the country was going through an intense period of change and uncertainty.  A lengthy war with France was recently at an end and the population was re-growing.  The 18th century had seen a lot of enclosure across England whereby traditional small narrow strips of farmland leftover from medieval times were broken up and merged to form larger enclosed parcels of land.  Land traditionally available for common grazing was transferred into private hands.  Just as today, wealth was passing from communities to politically powerful already well off families.  Meanwhile the industrial revolution grew apace and traditional cottage industries were in decline.  Villagers began to move away from independent living on the land to becoming dependent on an industrial wage packet.  The Poor Laws in England and Wales, which had been set up as a system of social care as long ago as the 16th century began to fail.  Previously villages were expected to raise levies or tithes for the relief of the poor, but by the 1830s some wealthy landowners made a concerted effort to reduce the amounts they contributed to poor relief, while some landowning farmers deliberately paid low wages because they knew the Poor Laws would make up the difference.  Talbot was acutely aware of all of this and must have wondered how he could help to resolve these issues.  Was a role in politics the answer? 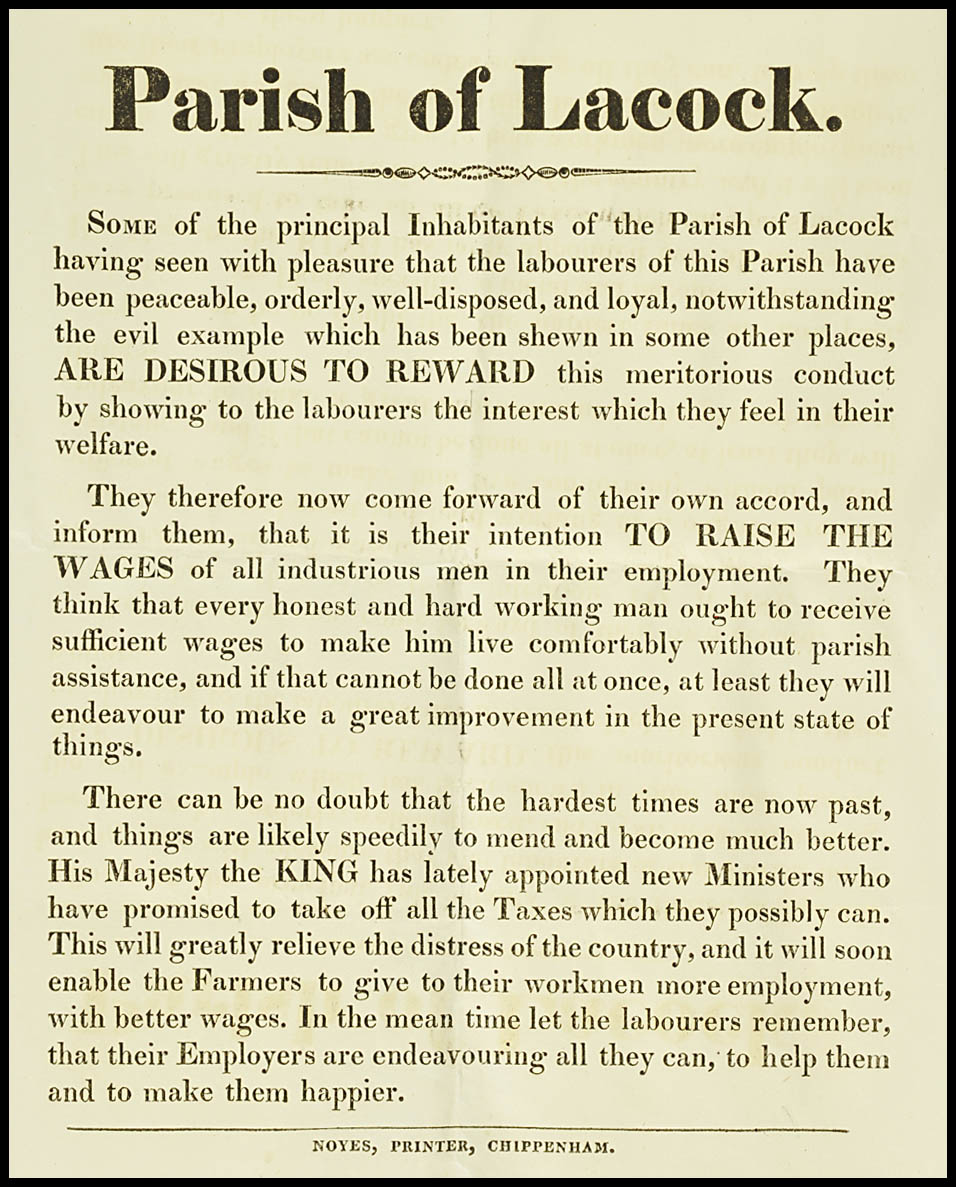 The second half of 1830 saw considerable political unrest.  Rioting, although sporadic, was greatly feared. Southern  rural counties like Wiltshire saw mobs smash newly emergent technology of the threshing machine because they were seen as a threat to jobs.  Talbot’s correspondence reflects both the fears of the surrounding district and the relief that Lacock itself had escaped pretty much unscathed.

In England in 1830 neither women nor Catholics were allowed the vote, and while large industrial cities like Birmingham, Leeds and Manchester did not have a single MP between them ‘rotten boroughs’ such as Dunwich in Suffolk (which only had a population of 32 in 1831) sent two MPs to Westminster.  The electoral system was outdated and unrepresentative.  To stand for reform was to be in favour of more people (but not everyone) having the right to vote in general elections.  Talbot could see that without some transfer power from the wealthier landowning classes unrest would only continue to grow.  He had proven himself to be a capable and sympathetic landlord; as a Whig, Henry Talbot cemented his reputation as a liberal fair-minded landowner by being in favour of parliamentary reform.

As soon as he invented photography Talbot recognized that one of its most important applications would be in copying documents, text, handwriting, etchings, engravings and sketches. Two waxed calotype negatives of the Leap Frog lithograph are known to survive, along with five prints from one of them.  One has the mysterious inscription: ‘HB’. You will search in vain for this abbreviation amongst Henry’s chemical notes as it stands for something entirely different. We know that the original lithograph was published by Thomas McLean on 13 April 1831, but at the time Talbot made his copy the identity of the artist and political cartoonist was a secret and known only by the initials ‘HB’ (formed from an elaborate doubling of the artist’s real initials, JD).  The identity of ‘HB’ as John Doyle was revealed in a letter to Sir Robert Peel in 1843, which implies Talbot made his copies before then.

One of the real strengths of photography was the ability to change scale.  A large painting could be accurately reduced to the size of a book page or a microscopic plant could be enlarged hundreds of times.  But perhaps the reason that so few photographic prints of Leap Frog were made was that Talbot realised that the image was ill-suited for such a change of scale.  Sadly, the finely delineated leap frogging figures and their speech bubble exclamations became unreadable in a reduced size. 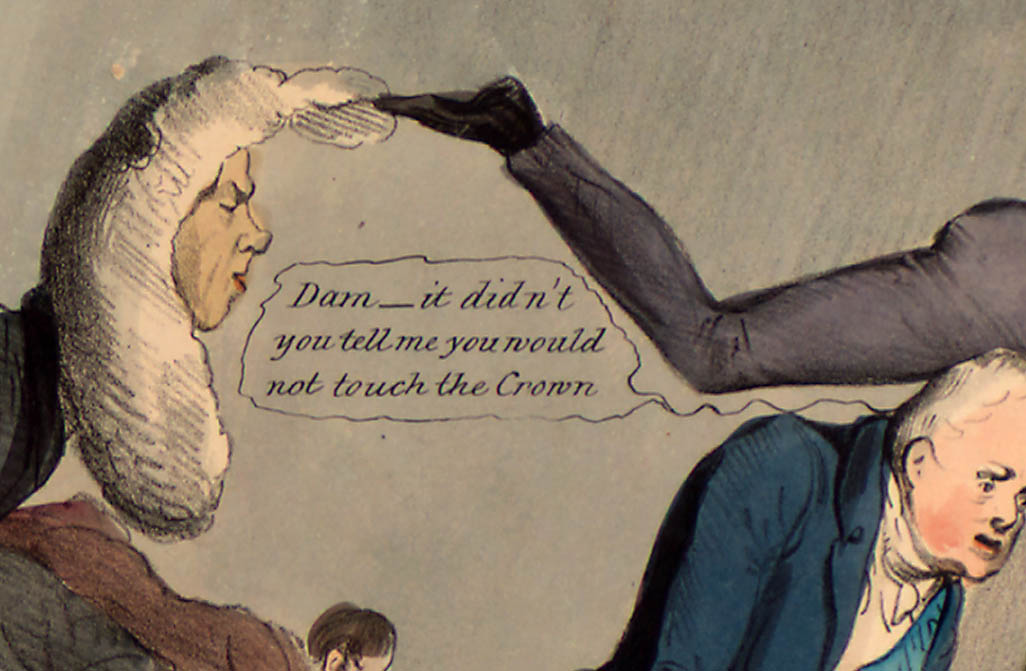 His calotype negatives measured 6.0 x 8.1 cm, reduced so much from the original lithograph’s 27 x 38.5 cm. that they represented less than five percent of the original’s surface area. Talbot was forced to turn to more graphic examples of works of art to illustrate this power of photography which eventually featureded prominently as plates in The Pencil of Nature.
I doubt Talbot ever read the work of his near contemporary, Karl Marx, but as a politically informed landowner Talbot was witnessing what Marx would later describe as the revolutionary transformation of a country from feudalism to capitalism. Talbot simply saw a need for reform and felt strongly enough that he decided to stand for parliament. His brief but important tenure in Parliament will be the subject of a future post. For now, let me just observe how incredible it is that so many of the letters on the Talbot Correspondence web site could be referring to recent political events, such as the government’s bail-out of failed commercial banks followed by austerity measures and the necessity for a network of food banks, the recent referendum on Britain’s membership of the European Union (a.k.a. Brexit), followed swiftly by ‘leap frogs’ in both the Conservative & Unionist Party and the Parliamentary Labour Party, to give them both their full and proper names. Meanwhile some would say that the need for electoral reform continues as 16 and 17 year olds are allowed to vote in Scotland but not in England, Wales or Northern Ireland. We have come a long way socially and politically since the 1830s, but as the French would say, “Plus ça change.”