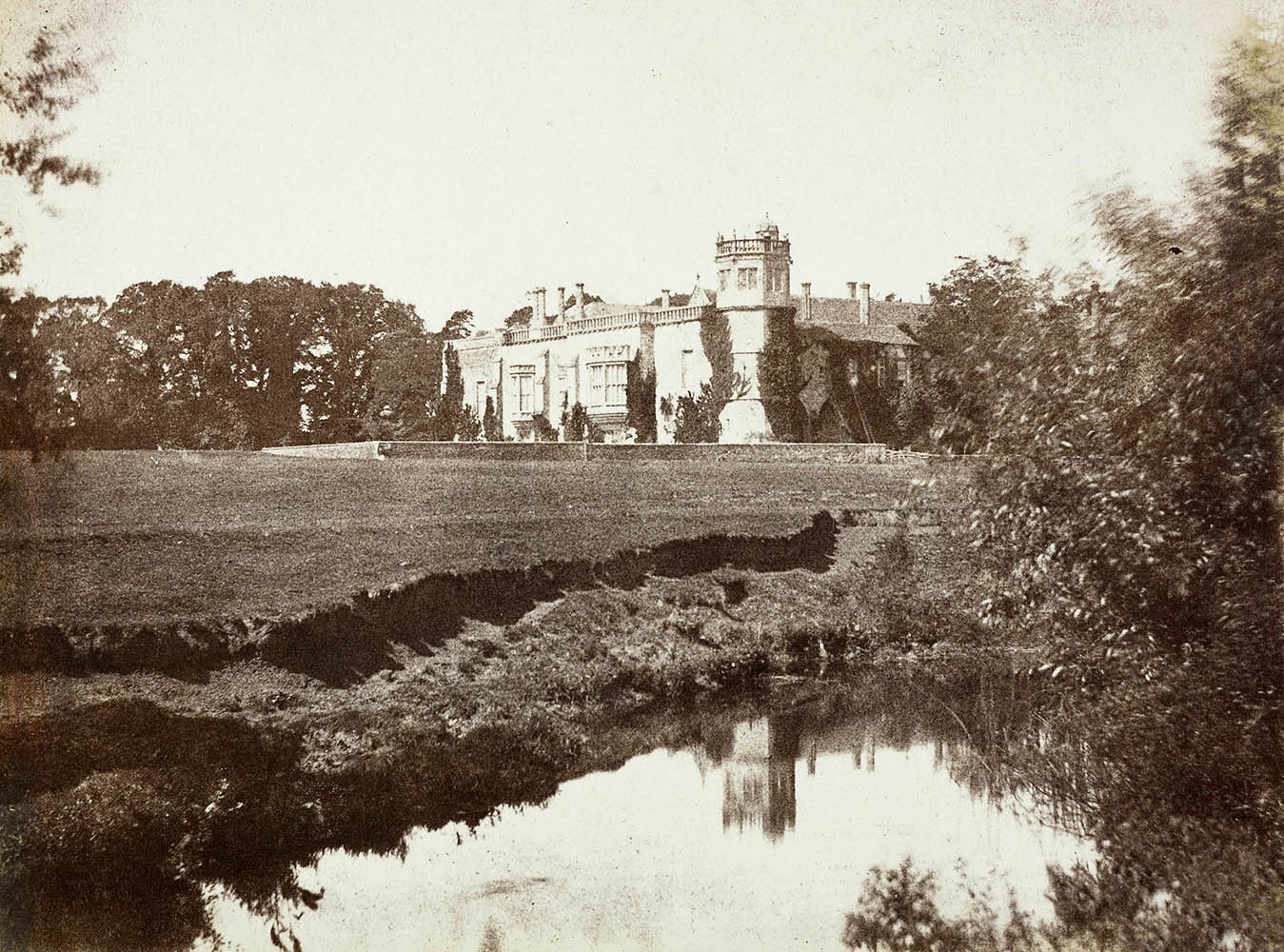 The most beautiful building in the world?  The most important architectural building in the country?  The grandest property owned by the National Trust?  Lacock Abbey may be none of the above, but even those who have never visited Talbot’s  home might recongise it from its star role in many major film and TV productions over the years.  With Jane Austen perhaps a close second, the Abbey has featured most famously in the Harry Potter movie franchise and carries a Grade 1 listed building status.

Perhaps the Abbey’s role in a movie about magic is not so very far removed from Henry Talbot’s amazement when it became  the first building ever “to have drawn its own picture”  (Niépce’s view was as yet unknown when he wrote this).  Yet Talbot’s supernatural claim is understandable, for his ancestral home was the first subject he trained his experimental camera upon, as described in his “Some Account of the Art of Photogenic Drawing”, read before the Royal Society in London on 31 January 1839.

Despite its considerable charm, Lacock Abbey has always looked a bit disjointed to my eye.  Sometimes when I see the extensive array of photographs that Talbot took of his home I wonder how they can all be of the same building.  Successive owners over hundreds of years made changes to the Abbey, but to me it seems that the way parts of the building from one period abruptly stop before another period starts, especially on the corners, almost makes the building look unfinished.

As his ancestral home Talbot knew Lacock Abbey was significant, but he did not always live there, and did not always love the place.  There will be more of that special relationship between Talbot and the Abbey in a future blog, but when Talbot came to decide which of his photographs should make the final selection for The Pencil of Nature, he included various views in and around the Abbey, acknowledging its importance:

“It is a religious structure of great antiquity, erected early in the thirteenth century, many parts of which are still remaining in excellent preservation. … The tower which occupies the South-eastern corner of the building is believed to be of Queen Elizabeth’s time, but the lower portion of it is much older, and coeval with the first foundation of the abbey.”

Although he respected its historic nature, Henry would eventually make considerable changes to the Abbey over time.

Lacock Abbey was founded by Ela, Countess of Salisbury in 1232 and its heart, the original medieval cloister lined with gothic arches, dates from this period.  The cloister often features in Talbot’s photographs of Lacock and is also the part of the house most people would recognize from the Harry Potter movies. 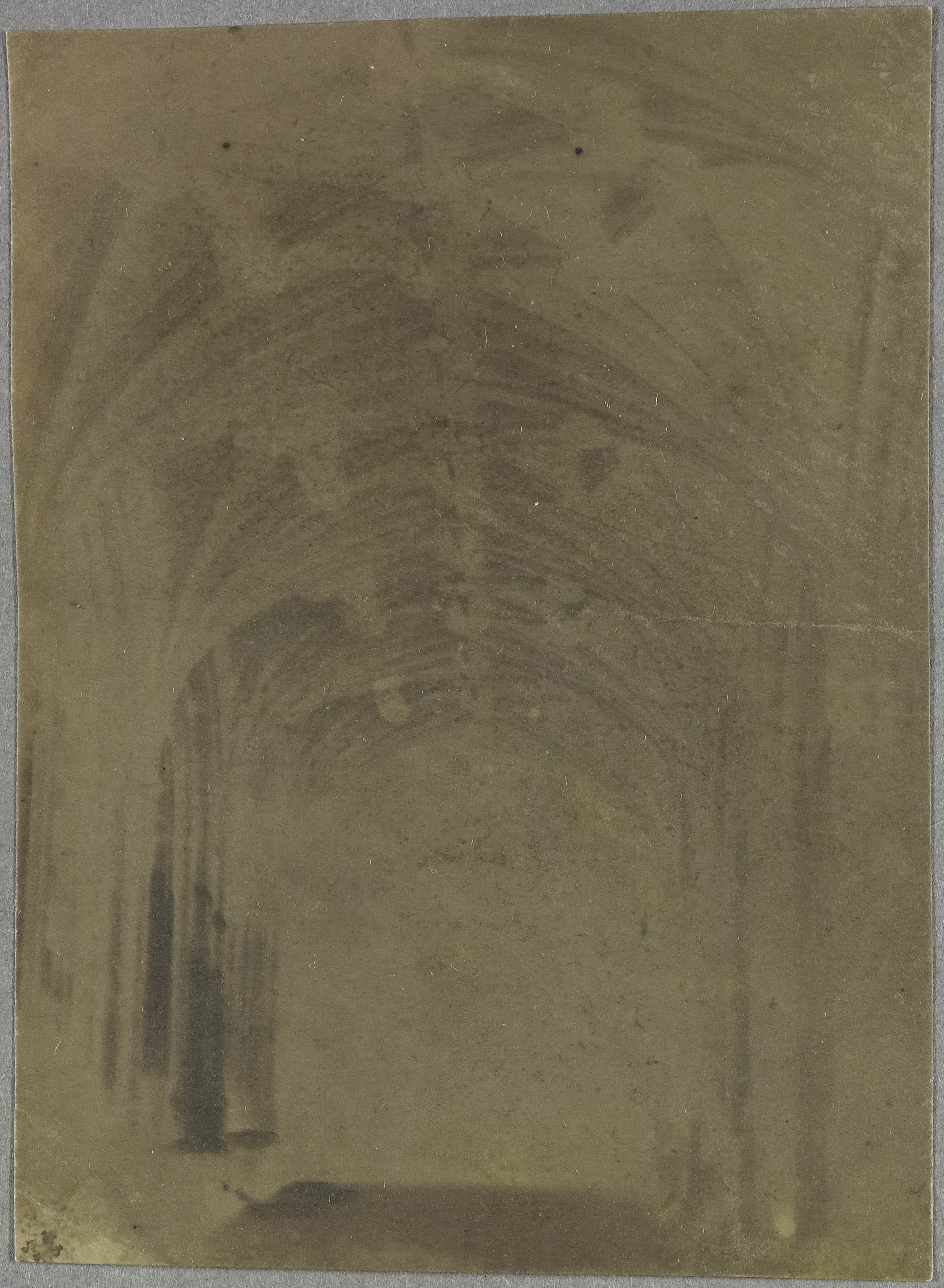 For over 300 years Lacock Abbey remained largely intact as an ecclesiastical structure and by the 16th century the nuns who lived and worked in the Abbey could be forgiven for assuming that the medieval fabric of the building would be preserved forever.  But everything changed when King Henry VIII decided to divorce the first of his six wives, Catherine of Aragon. The 1534 Act of Supremacy severed all links with the Catholic Church in Rome and made Henry VIII the Supreme Head of the Church in England.  In addition to clearing the way for divorcing his then-wife, the King could dissolve and sell any abbey or monastery and use the proceeds in any way he saw fit.  By 1537 it became clear that King Henry aimed to totally extinguish monastic life throughout the land.  Lacock Abbey’s days as an ecclesiastical institution were numbered.

The King’s courtiers employed as diplomats to Rome and as lawyers stood to make considerable personal gain from the Dissolution of the Monasteries. They were well placed to bid for any ecclesiastical property about to be stripped of its assets and  Medieval ecclesiastical buildings were turned into fashionable Tudor residences all over the country. Lacock Abbey did not escape this fate.  In 1540 the nunnery at Lacock was dissolved by the Crown and the building snapped up by member of the King’s Privy Chamber, Sir William Sharington, for the considerable sum of £783 13s 10d.  There are many pitfalls in trying to calculate the actual value of money in the past, but for comparison the £30 per annum that Hans Holbein received from Henry VIII for his work as court artist was considered to be quite substantial.  A highly paid soldier might get ten pence a day (at a time when there were 240 pence to the pound). 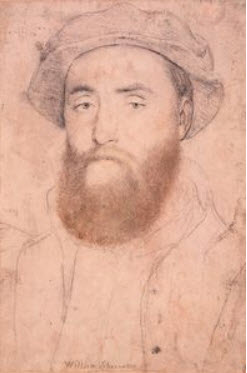 Although the medieval Lacock Abbey it was in good repair when Sharington bought it, its Gothic appearance would have been considered unfashionable.  So, Sharington updated his new home in the latest Renaissance style which had recently arrived in England from France.  This entailed wrapping the building’s medieval core with a new Tudor skin, re-fashioning the original monastic property with a new accent on symmetry. 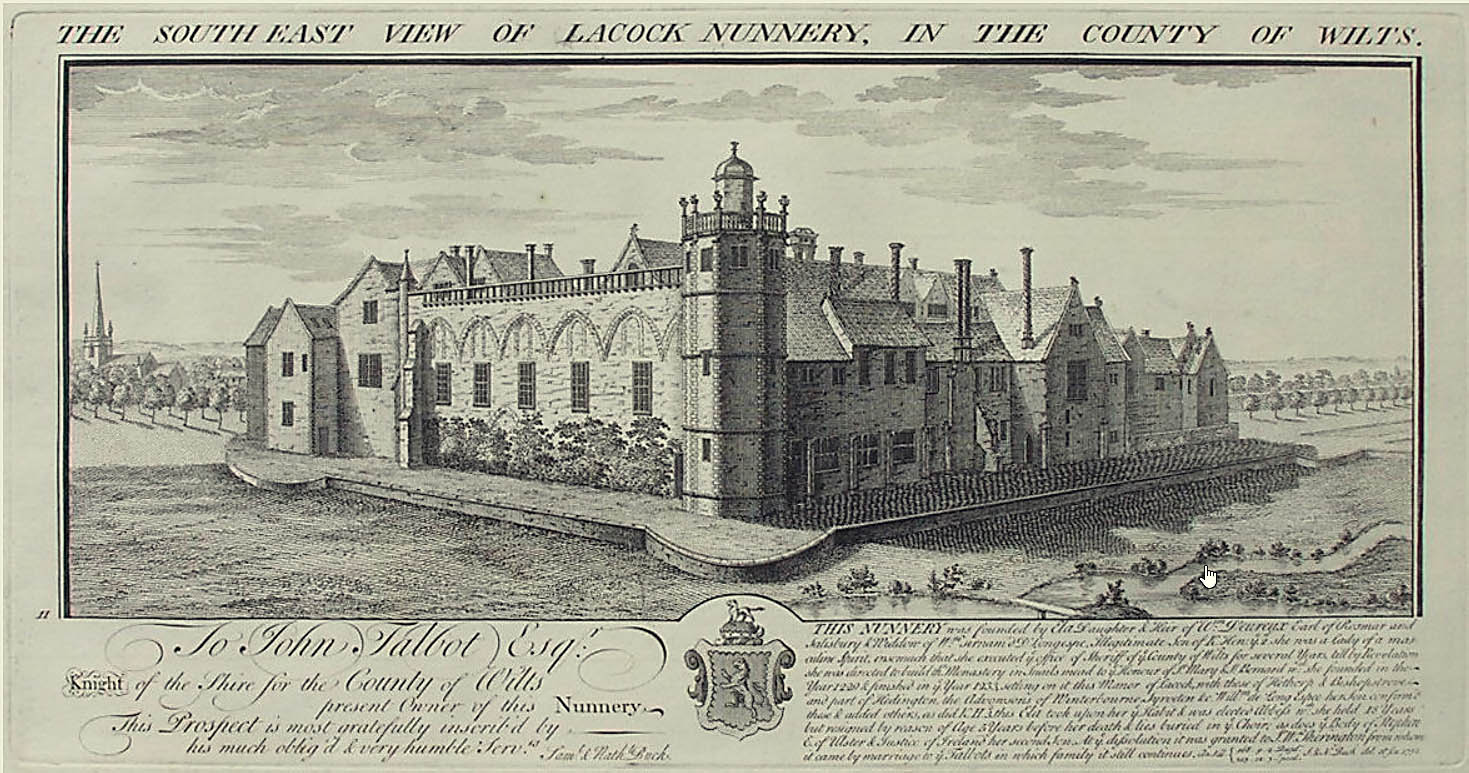 One simple but effective Tudor trick was to accentuate the corner of buildings with a tower.  This gave the effect of symmetry to the two adjacent walls even if  they weren’t exactly the same. The fine example of the celebrated octagonal tower at Lacock still bears Sharington’s name.

Another way the Tudors gave balance to an uneven elevation was to shift around original medieval features such as doorways and windows to make the elevation even more symmetrical.  The result was Gothic features balanced in a Classical way. 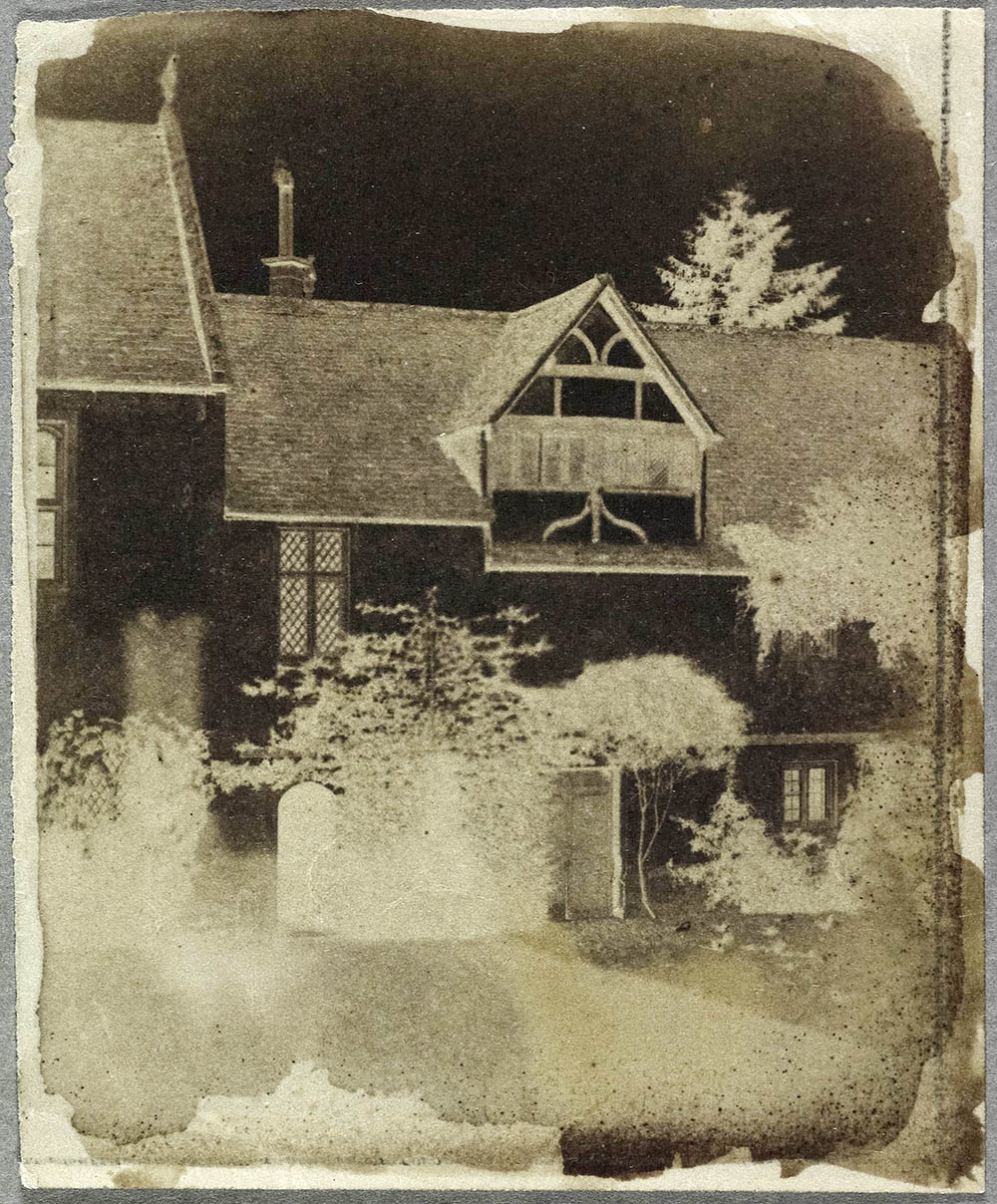 Sharington’s architectural exploits ceased in 1549 when he narrowly escaped execution for treason when his part in an embezzling the Royal Mint was uncovered.  The Talbot name first became associated with the Abbey in 1574 when Sharington’s niece, Olive Sharington, married one John Talbotte Esquire.  Nothing much changed the fabric of the Abbey for the next hundred years.  However, by the middle of the 18th century a new architectural style came int vogue, championed by the architect Sanderson Miller.Luckily, this new style also relied upon a Classical adoption of Gothic features, but in  a more delicate way, becoming known as Modern Gothick.

Miller was living the life of a country gentleman until his father died.  He then Gothicised his estate in a modern manner to his own designs.  Before long he was courted by friends and acquaintances who wanted him to do the same for their estates, including John Ivory Talbot (1691-1772), MP for Wiltshire and owner of Lacock Abbey.

Mr Talbot let it be known to some friends visiting the Abbey that he had thought about rebuilding the Great Hall at Lacock.  Everyone agreed that the medieval origins of the Abbey made Lacock the perfect project for Sanderson Miller, so an introductory letter to the famous amateur architect was written…

“As the house consists of the remains of an Old Nunnery it was agreed on all hands that it would be most proper to fit it up in the Gothic Taste … You will not be surprised that I mentioned your name … [John Ivory Talbot] was much pleased at the thought of having it under your direction as he had been informed before that no one would be more likely to assist him than yourself.” Miller agreed and a new Great Hall in the highly fashionable Modern Gothick style was the result. To complement the new scheme, the Great Hall’s interior was decorated with a series of monumental terracotta figures by Victor Alexander Sederbach set in Gothick niches.  One of the best known is of ‘Diogenes the Cynic’, which was also later photographed by Henry.  Less known is one of his ambitious early attempts to photograph a large and largely dark interior space. 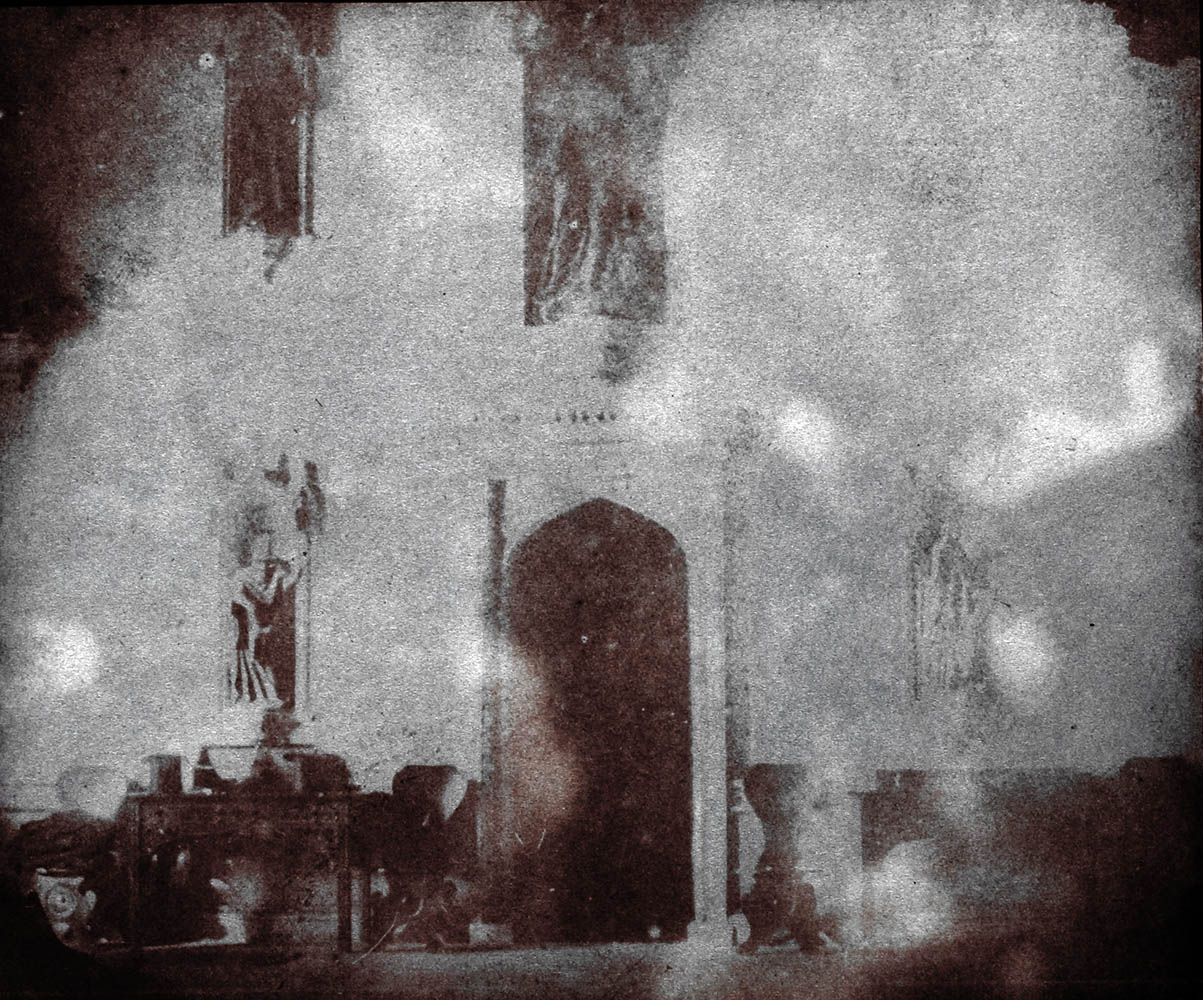 By 1754 the work was almost complete and a new Gothick archway large enough to allow a carriage to pass through was built from the  leftover masonry.  This became one of  Henry Talbot’s earliest camera subjects. 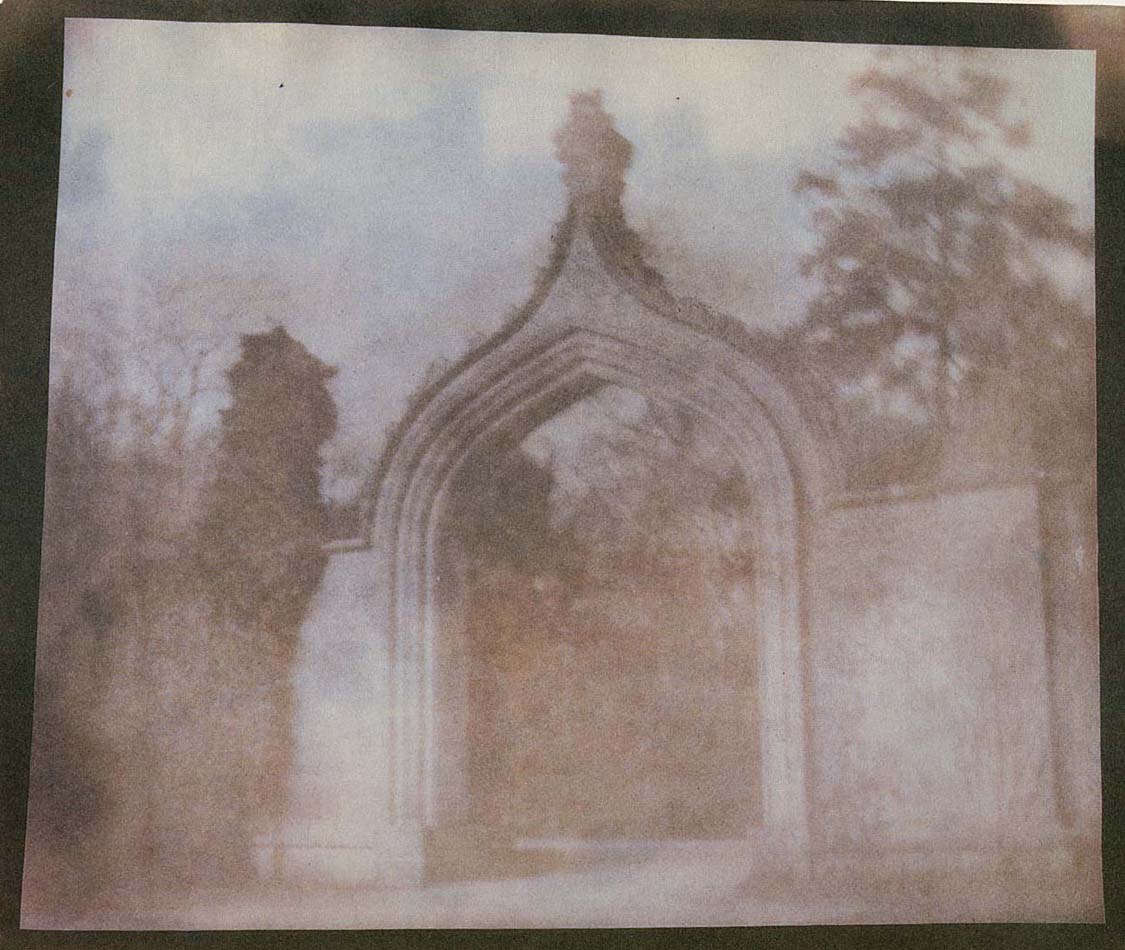 Sanderson Miller’s work at Lacock is among his finest, and with it another layer of architecture had been added to the already diverse styles built up at Lacock Abbey over hundreds of years.  More importantly for us, the Lacock Abbey we came to know and love via Talbot’s photography was now essentially complete. 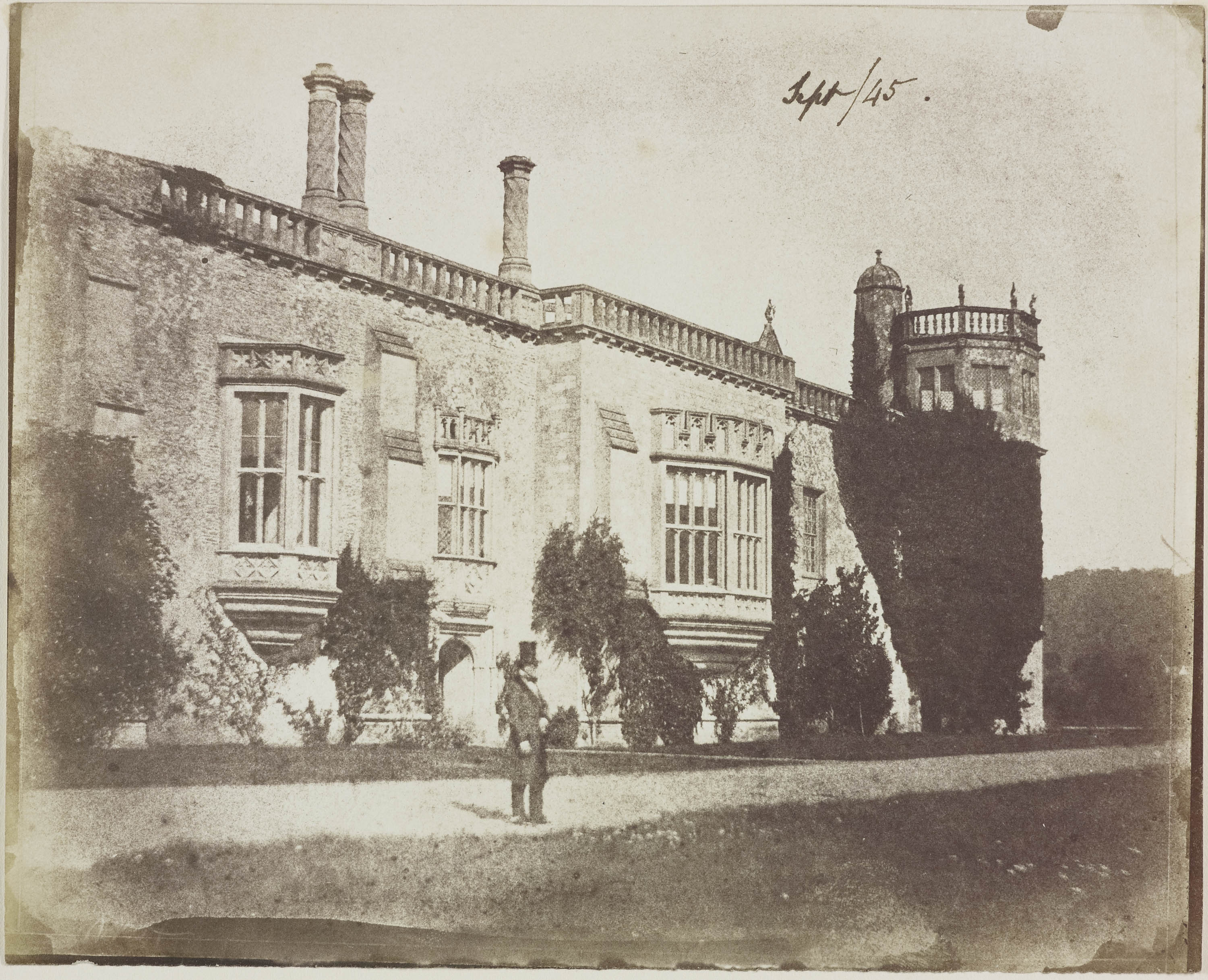 Lacock Abbey is a complex building made up of an incredibly diverse range of architectural styles amalgamated over hundreds of years.  It is difficult to read as a place if your only knowledge of it is from Talbot’s photographic studies, but after a visit to the Abbey everything falls into place.  And when you do visit, as I hope you will, you will recognise much of the Abbey from Talbot’s photographic work.  Not just the facades and the cloisters, but also the windows and doorways.  So many incidental features appear in Talbot’s photographs of his family and friends at Lacock.  Only during a visit to the place will it reveal its charm to you, and only then you will understand why Talbot grew to love Lacock, and felt compelled to turn his camera upon it time after time.