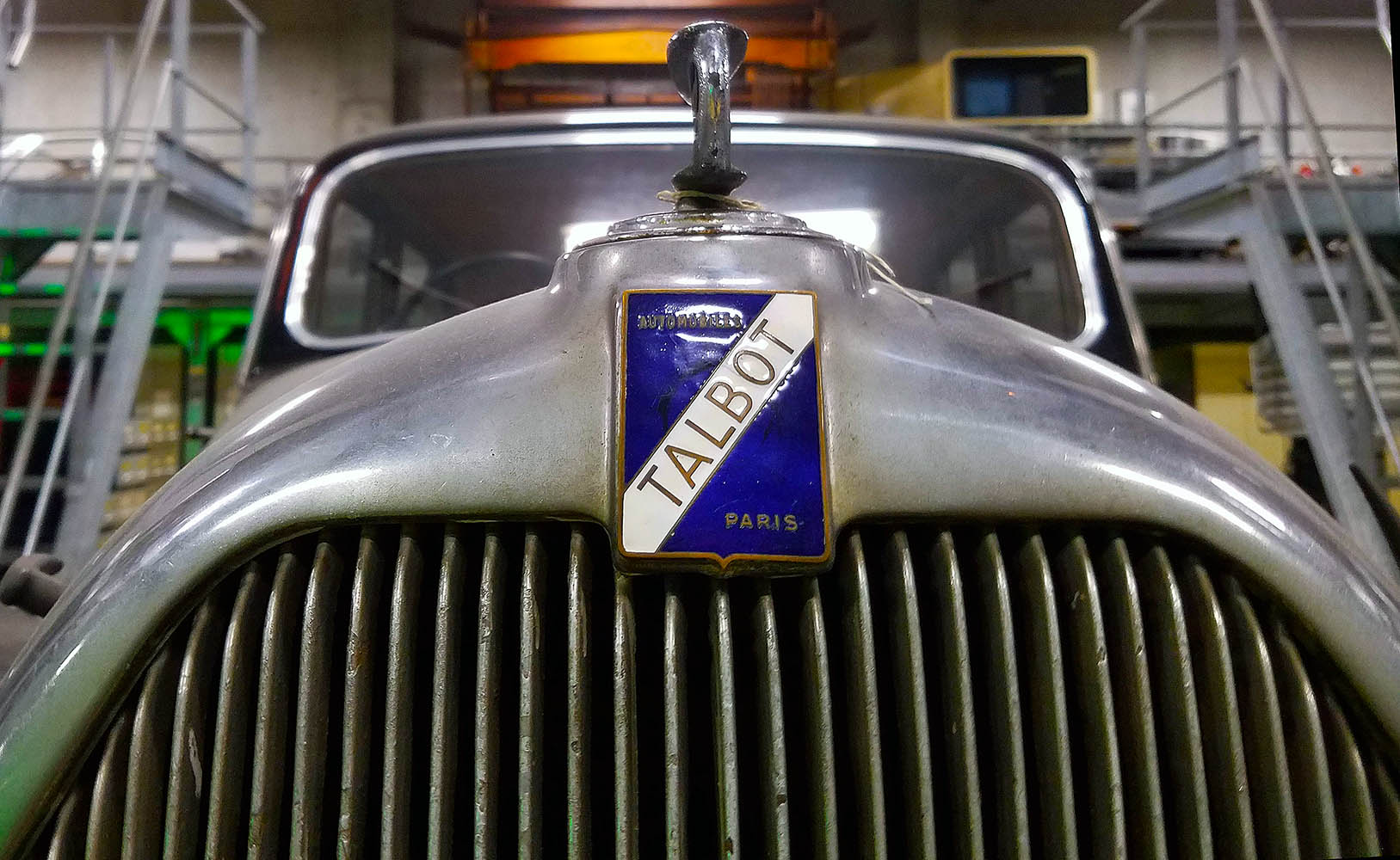 Earlier this week, Paul-Louis Roubert met up with me to travel to a remote storage facility just outside Paris. Paul-Louis is the President of the Société française de photographie and a member of our Advisory Board. I have long been convinced that there are more original Talbot photographs surviving in France than is generally known but they have proven elusive over the years. Recently Paul-Louis has been helping me to snare them. 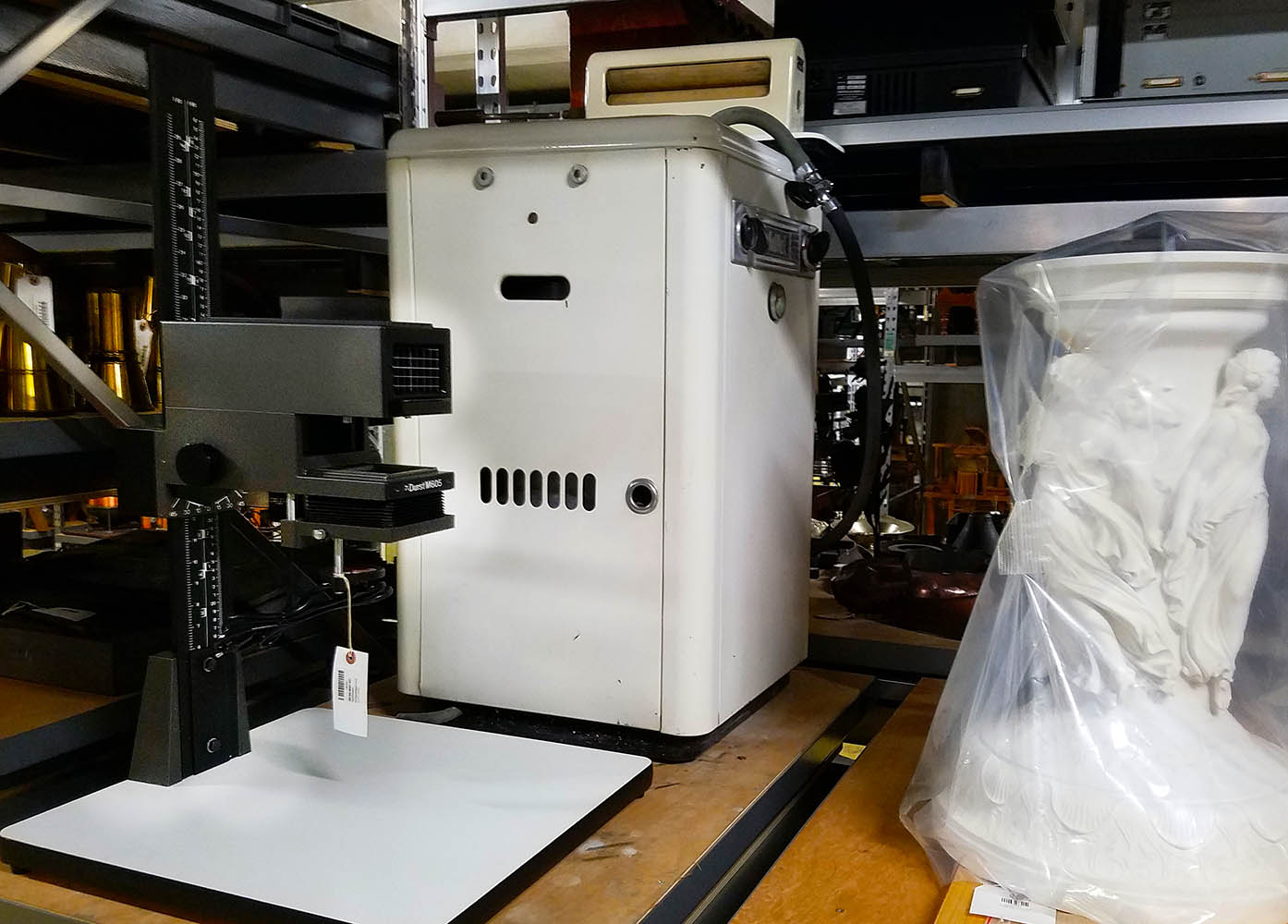 Finally finding our way around the tangled jumble of ultra modern buildings, we entered a grounded spaceship and were enthusiastically received by Marie-Sophie Corcy. She is the curator of the communications collection of the Musée des arts et métiers. Entering into her sprawling storage facility, the brace of cliches about Alladin’s Cave and Indiana Jones could not be avoided. Very carefully positioned and neatly tagged, thousands of incongruous neighbors sat side by side, each assigned a place on the industrial shelves not categorized by function or age or method of manufacture but rather by size and weight and compatibility of material construction. The imagination could not help but be stimulated no matter where the eye alighted. Picking out just one little shelf, the enduring values of the sculpture cast ensured its place in our material history. In the background is an early electric washing machine, its wringers perhaps a bit strange to the modern eye but something that we could all imagine putting into immediate service. Likewise, the grand brass lenses just visible to the left could be mounted on a wooden camera right now and used to take modern calotypes. But what of the late model photographic enlarger, neatly tagged in all its glory? Of everything displayed here it is perhaps the most obsolete. It could still be used, of course, but very few would either know how or even care to know. It is the only object in this scene where more modern folks may gently deceive themselves into thinking that there is an app for that. 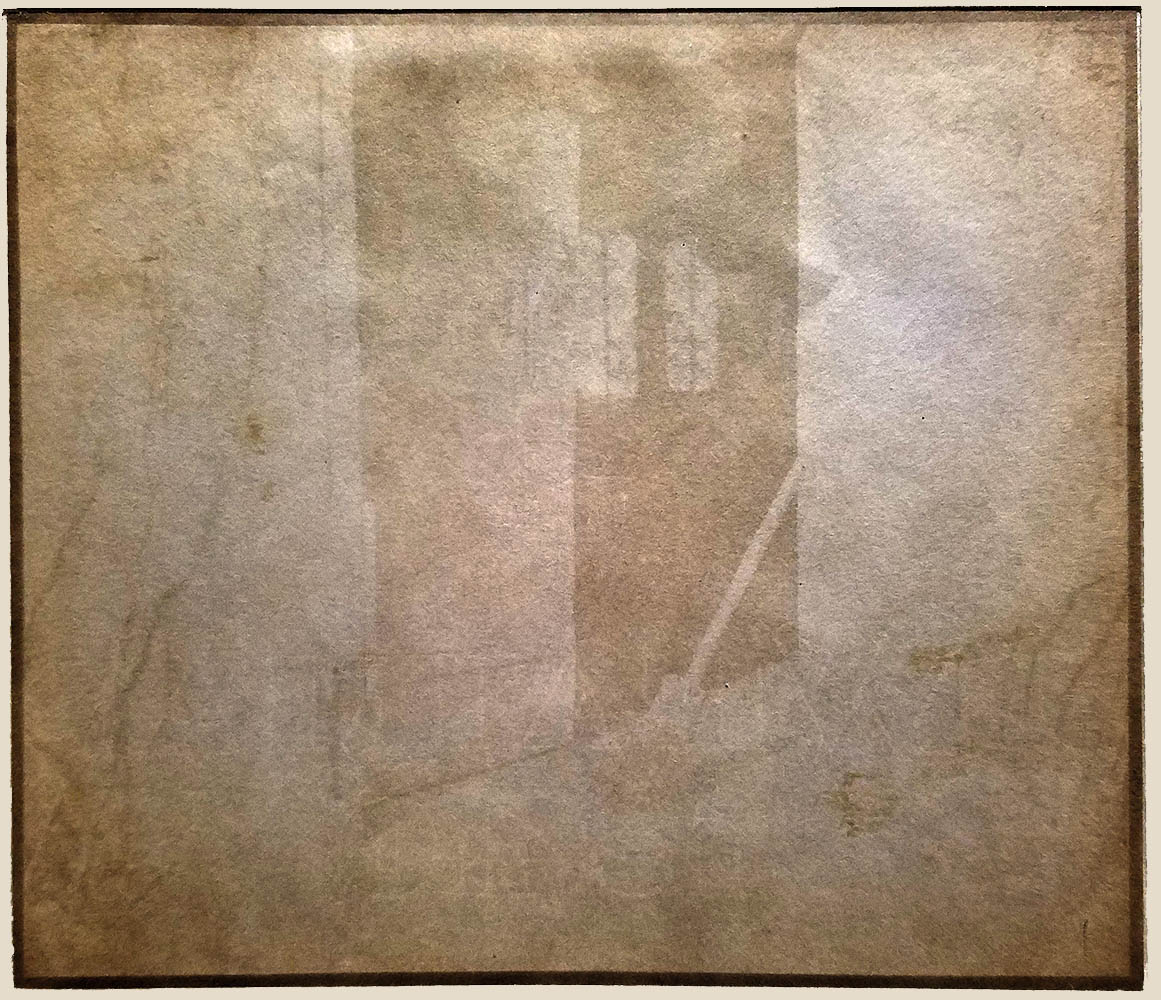 But on to the real mission. One small group of salt prints represented rare survivors from the personal collection of Hippolyte Bayard (1801-1887), the French artist and inventor who was forced off stage in 1839 by François Arago’s perhaps necessarily overly active promotion of Daguerre. Like Talbot, Bayard was confident of the originality and individual merit of his own invention and like Talbot he failed to receive the credit he was due. In some respects they were natural allies, not against Daguerre and what he accomplished, but rather against the historical narrative of exclusivity that was being created around him. We don’t know the exact nature of the relationship between Bayard and Talbot. He learned about Bayard’s work from several sources in 1839. In 1842, the optician Charles Chevalier praised Talbot’s latest productions that he had been shown by Amélina Petit and pointed out the importance of paper photography by both Talbot and Bayard. In February 1843, Calvert Jones wrote to his friend that “As I hear you are going to Paris, I hasten to enclose a note of introduction to M Bayard with whose Photographs you will be much charmed; I hope he has perhaps ere this published his method.” Jones, an artist, had initially used the daguerreotype and a month after this explained that “I am afraid that you imagine I either underrate or have not fairly tried your beautiful discovery; neither of which I assure you is the case; I admire it beyond measure, and tried it at Paris with M. Reynault and M. Bayard (the latter succeeded in making an excellent portrait of myself).” Talbot then wrote to his friend Sir John Herschel, discussing the merits of negatives versus direct positives: “M. Bayard at Paris whose efforts are directly solely to this point, does not seem to have succeeded. I think I shall shortly visit France & see how they are getting on there in matters of science.” Jones sent some of Bayard’s photographs to Talbot (these have yet to be found) and sent some more in 1844. I often wondered if Talbot and Bayard had ever met in person, for they may have been separated by questions of class or suspicion. However, Jonathon Pledge of the British Library recently located a mention buried in Talbot’s travel diary for May 1843: 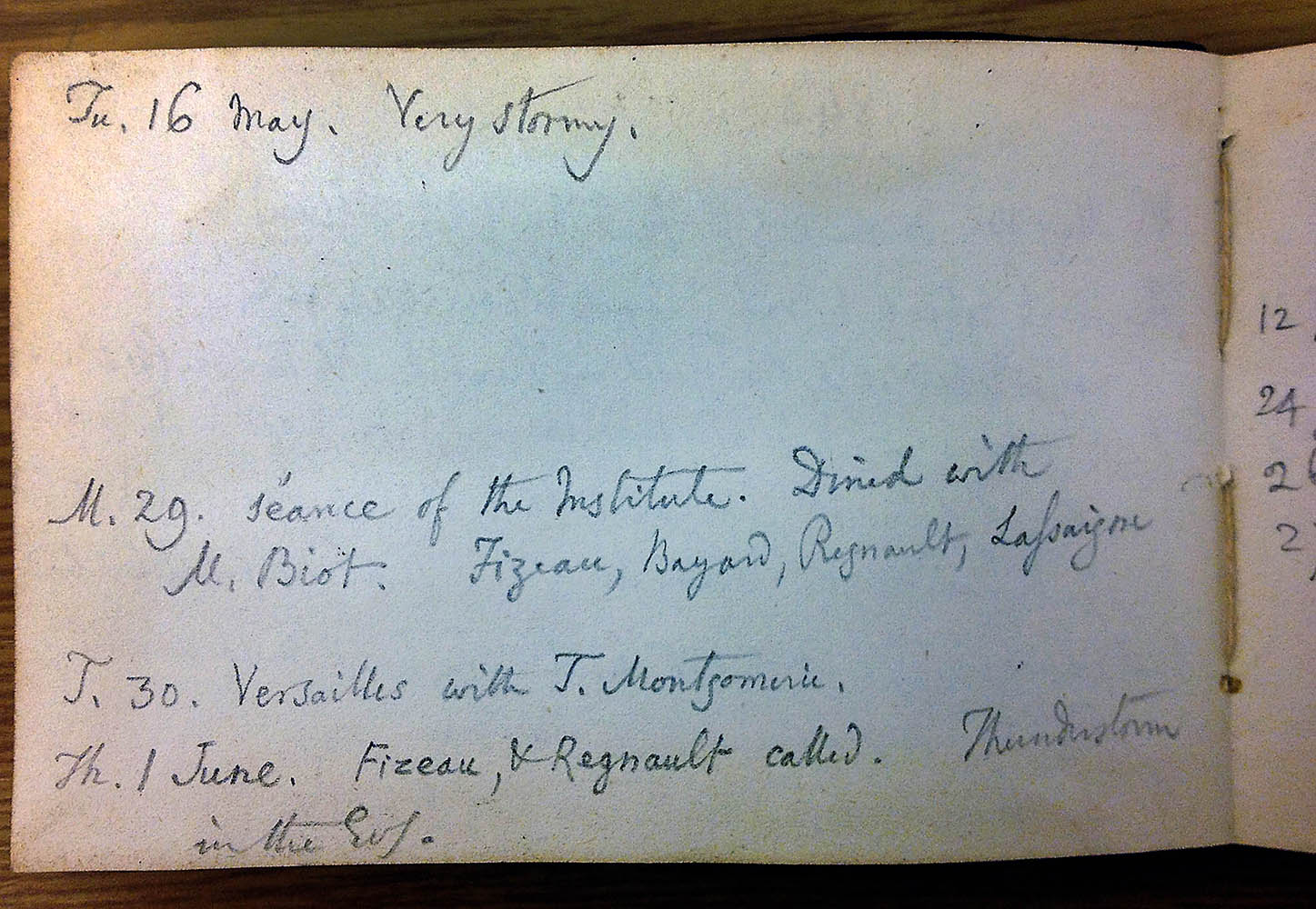 In any case, Amélina Petit and Calvert Jones seem to have been the main intermediaries in Talbot’s French connections.

There is a hint on the inscriptions on the verso of some of Bayard’s Talbot prints that supports the idea of Jones’s involvement. The dating of 1844 is wildly wrong for the 1841 Soliloquy – is it more likely the date that Bayard received these from Jones? Bayard’s Talbots were acquired in 1881 on the occasion of the opening of gallery of graphic arts and photography in the Arts et metiers – they were donated by Louis Alponse Davanne as examples of the first processes of photography.

As much as I had looked forward to seeing the Bayard group, Sophie-Marie surprised me even more with a second acquisition. This group entered the museum in 1927 and had originated with the Collège de France. Details are sparse at this point but research as to the provenance is ongoing. Talbot had opened his Pencil of Nature with a first plate of Oxford, but the very second plate took him into Daguerre’s territory.

In Talbot’s text, he observed that “This view was taken from one of the upper windows of the Hotel de Douvres … the time is the afternoon. The sun is just quitting the range of buildings adorned with columns: its façade is already in … the shade, but a single shutter standing open projects far enough forward to catch a gleam of sunshine…. They have just been watering the road, which has produced two broad bands of shade upon it … a whole forest of chimneys borders the horizon: for, the instrument chronicles whatever it sees, and certainly would delineate a chimney-pot or a chimney-sweeper with the same impartiality as it would the Apollo of Belvedere.” I had known of several variant negatives of The Pencil of Nature plate – after all, once he set up his camera Talbot would have been foolish not to have created backups (or at least tested the effects of the changing light).

The Collège de France collection produced two wonderful negatives previously unknown to me, one a close variant of The Pencil of Nature plate. Both are in beautiful condition and matched with prints. Just who in France Talbot presented these to is at this point unknown. The prints are typical of those produced by Nicolaas Henneman at Reading so my working theory right now is that rather than leaving them in Paris, Talbot took the negatives home, printed them and then sent them to some French colleague. Stay tuned. As unexpected as these negatives were, turning them over produced the best surprise.

From his and Henneman’s travel records we have always known that the Paris views were taken sometime between 19 May and 12 June 1843. These are the only Parisian negatives that I have seen where Talbot dated them precisely in his own hand on the negative itself. And having done so in French, he clearly did this for the benefit of his unknown colleague across the Channel. 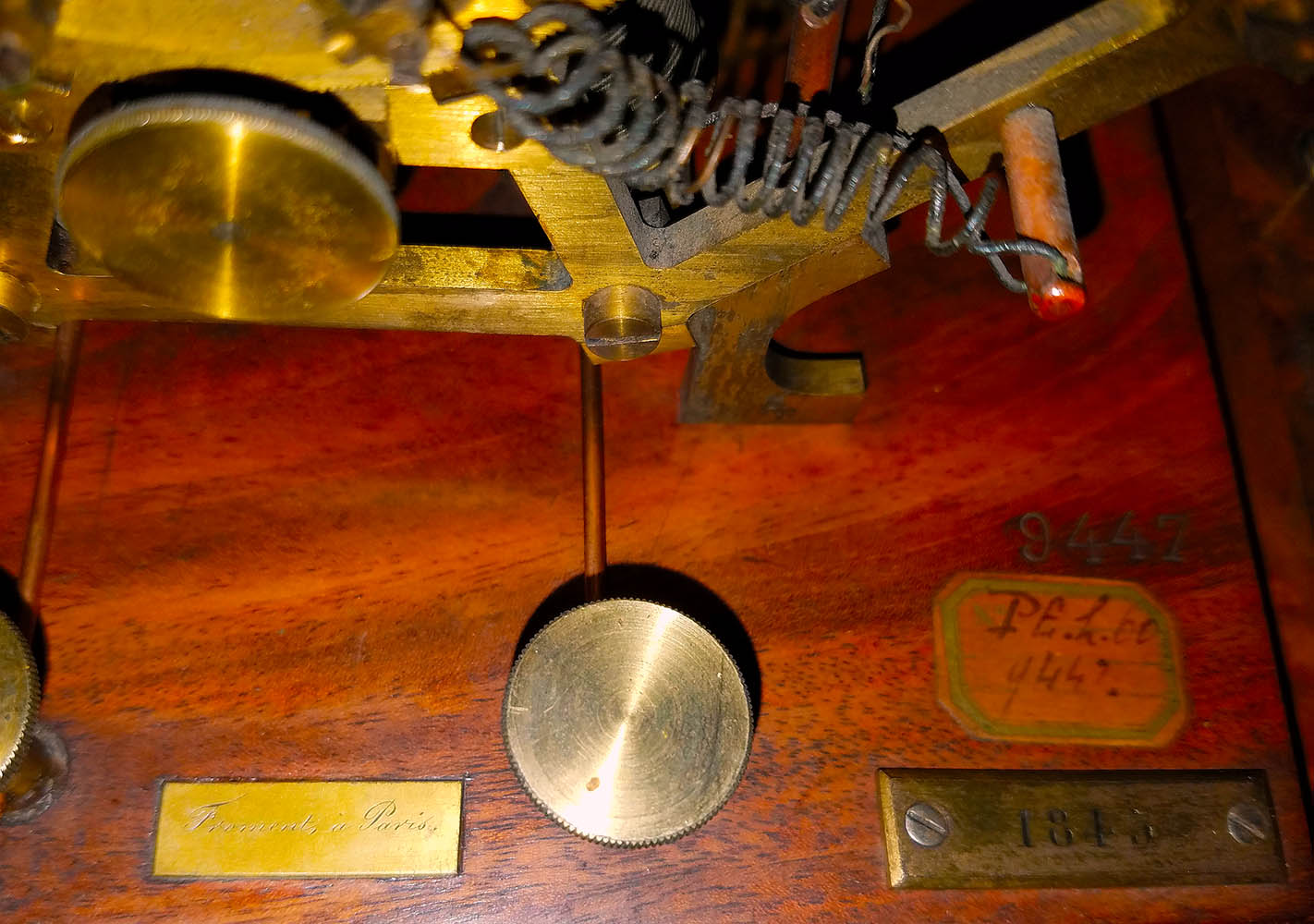 Finally, surrounded with all this glory of brass and mahogany, I couldn’t resist asking about possible examples by Paul Gustave Froment (1815-1864), a brilliant and talented scientific instrument maker who played a tantalizing but largely unresolved role in the very early history of photography. Sophie-Marie very graciously guided us to several scattered locations where his splendid instruments are preserved. But his possible role in photography is another whole peel of the onion that is currently being explored. It is something that we must take reserve for discussion in future.