This week’s offering is a counterpoint to Larry’s previous blog, A Tale of Two Photo Londons. 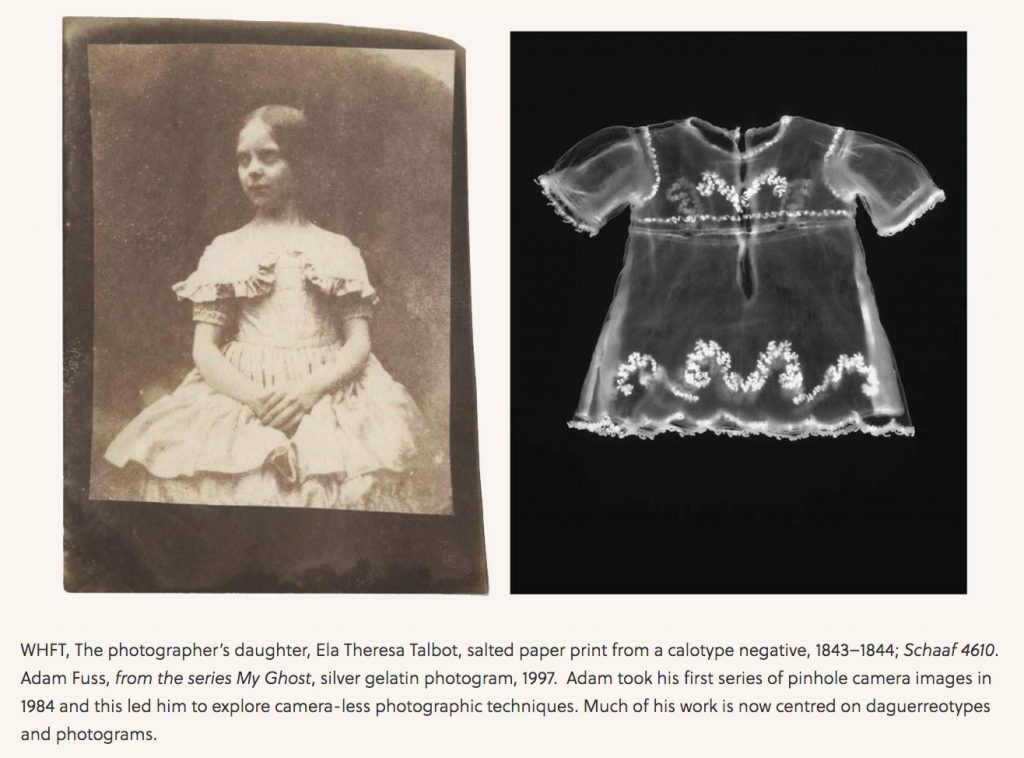 Larry’s blog alerted us to an exhibition curated by Hans P. Kraus Jr. which was soon to be unveiled at this year’s Photo London (not to be confused, of course, with the other photoLondon covered in the same blog). The self-explanatory title of the exhibition, Sun Pictures Then and Now: Talbot and His Legacy Today, along with a promotional leaflet for the exhibition inspired the format of Larry’s introductory blog to highlight the upcoming show, which of course no one had seen at the time the blog was written. The exhibition’s layout and juxtapositions were a mystery at that point. I’ll come back to that, but first I’d like to remind you of Larry’s important observation, that the venue for the exhibition was to be Somerset House, the very same venue where Talbot read his first paper on photography to the Royal Society. That was in January 1839, but knowing that fact made the exhibition even more thrilling than it already was, if such a thing is possible.

But I digress. Back to Larry’s introductory blog and how it relates to the finished exhibition. To illustrate the basic premise of the show (that Talbot continues to influence contemporary photographers in the twenty-first century) Larry made a sequence of comparisons between works by Talbot showing them alongside works by contemporary artists. Often the two images had something in common, whether they were both of the same subject, such as Lacock Abbey, or they may have had some formal quality in common. These pairings neatly and succinctly summed up the idea upon which the exhibition was built: that photographs taken by Talbot some time ago were to be displayed together with photographs taken recently with Talbot’s oeuvre in mind. 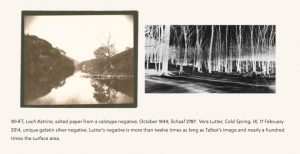 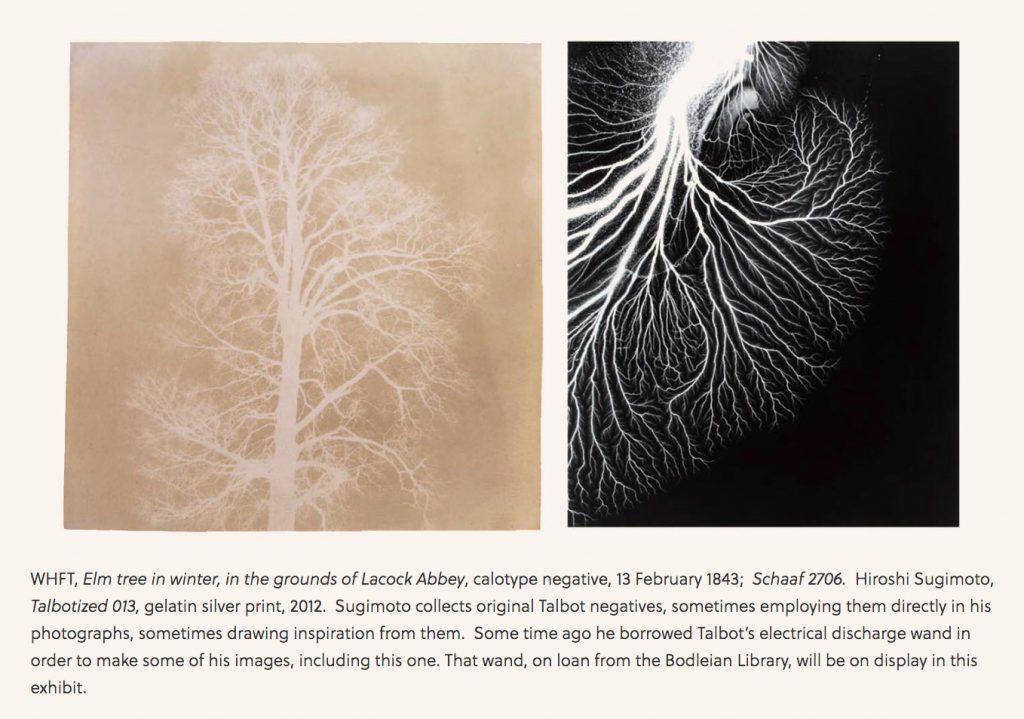 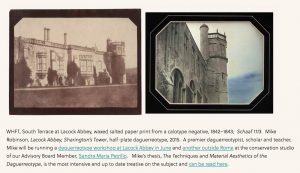 These pairs worked perfectly for the blog. But a blog is not the same thing as a gallery experience where the viewer can move around freely, going between the works on display as and how they like. Hans Kraus clearly knows this because he didn’t use the same approach for the gallery hang as Larry used in his blog. Instead Hans looked at the layout of the gallery, which is essentially a single space divided into two halves by an enormous glass staircase, and devoted the first half of the gallery to Talbot while giving the second half over to those modern artists who had been influenced by Talbot. It was an inspired decision, because it encouraged the viewer to constantly move backwards and forwards, over and over, time and again, to look at the Talbot material after being informed by a contemporary work, and vice versa. The result was an intriguing dialogue. I’m told they have a fitting expression in football circles when they say, it’s a game of two halves (a good title for an exhibition, maybe). 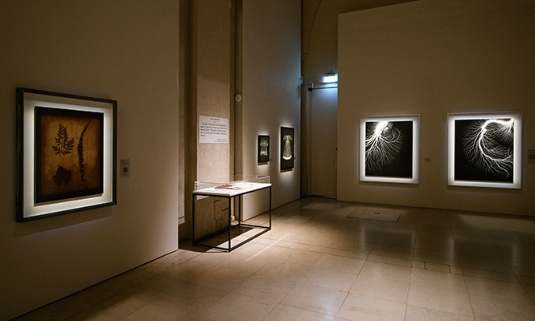 There were inklings in other previous posts by Larry of what was in store, such as the incredibly beautiful ‘Iotypes’ by Grant Romer, which Larry had highlighted at the foot of another recent blog. Oh, and before I forget, it’s worth saying that the exhibition was also simply beautiful. Not an easy feat in a room which when empty probably has the look and feel of a concrete bunker, but on this occasion the brute of a space was tamed. 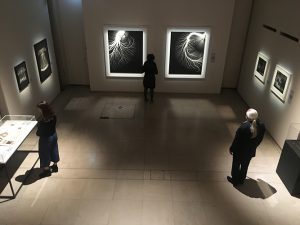 There were also important items on loan from the our very own Bodleian Library’s Talbot collection. Talbot’s personal electrostatic ‘wand’, which he used for experiments in electricity, was on display. The Bodleian had previously allowed Hiroshi Sugimoto to borrow the very same wand. Incredibly, the Bodleian gave permission for the wand to be used as originally intended, to carry electrical charges which were discharged in the creation of Sugimoto’s, Talbotized series of photographs. Some of these electrical field photographs by Sugimoto were also on display.

The Bodleian’s generosity fostered a second direct link between Talbot and a living artist when they allowed Cornelia Parker to borrow some of the original glassware Talbot had photographed in his now famous, ‘Articles of Glass’ of 1844. Parker cleverly used the Bodleian’s articles of glass to make a sequence of photograms. Glassware, Talbot’s photograph of the glassware, and Parkers photographs from the glassware were all on display. To find yourself in a gallery full of tangible links between Talbot and his personal effects which either appear in, or were used to create the photographs on display (or both) is a rare and special event.

For those of you who couldn’t make it to Somerset House, you missed a trick. However, you can get a good sense of what the Talbot exhibition was like as Photo London have taken the time and trouble to create a virtual 360-degree walk-through tour of the exhibition. Click here then go to the window labelled ‘Embankment’ to experience it. 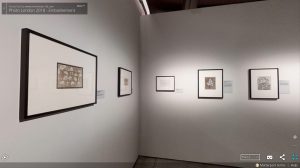 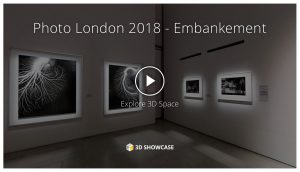 It truly is a shame that the exhibition was only on show in London for a few days. Its brevity was perhaps another layered meaning, or passing reference to the fact that photographic images are essentially fugitive and do fade. I would urge any museum or gallery that has a gap in their programme contact Mr Kraus to discuss the possibility of recreating the exhibition so that it can be enjoyed by a wider audience. There would probably have to be a new selection of Talbot images made for any revival of the exhibition, but that wouldn’t affect the idea at the heart of the show, which is to prove that even in this digital age Henry Talbot remains an important influence on contemporary photographic practice.