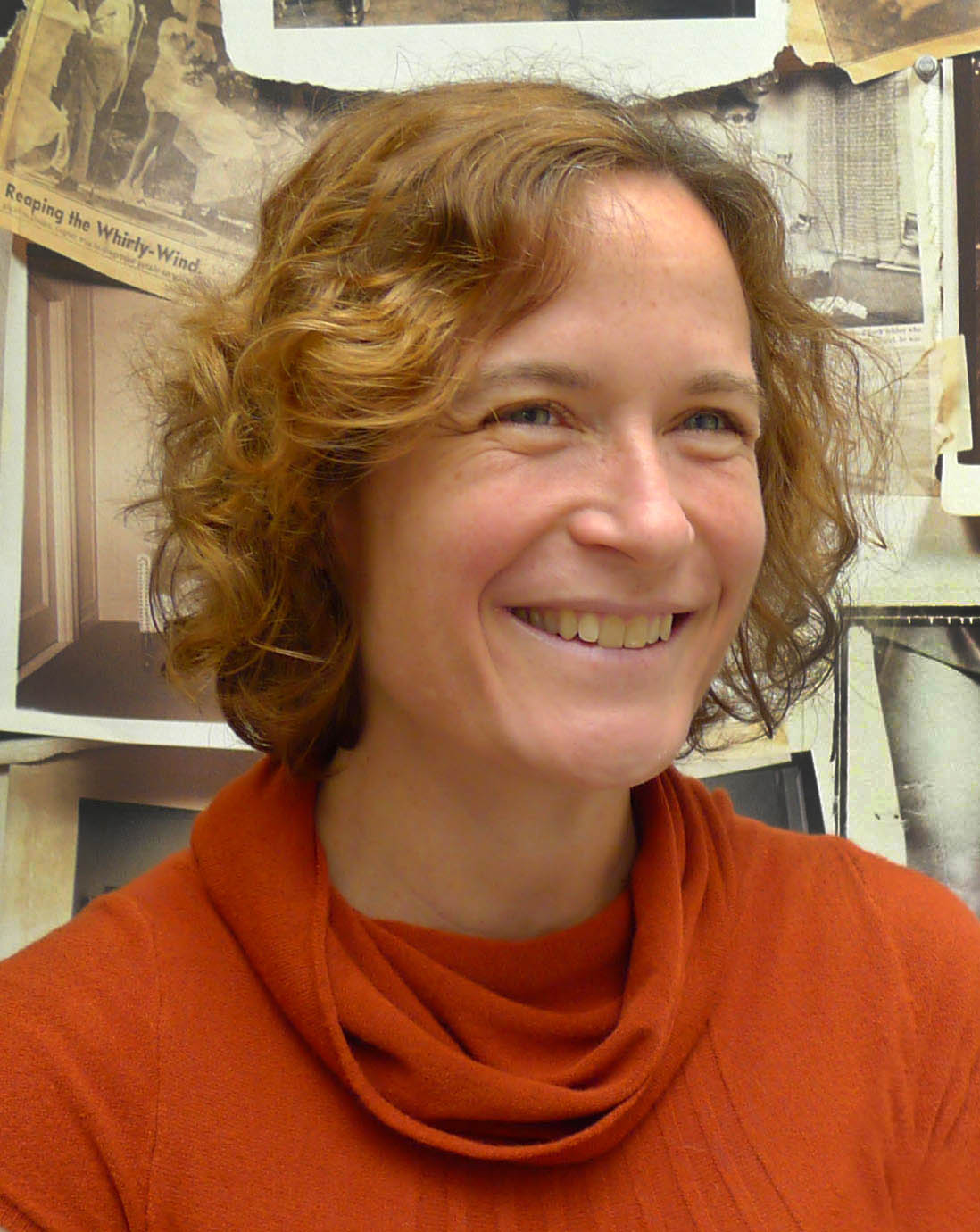 Last week was half-term in many places around the UK, and I suspect that many of us were hiking for at least part of the time if the weather held. If we had been more like the 21-year-old Henry Talbot, we might have embarked as he did on a strenuous series of hikes over the Swiss Alps. On the 19 July 1821, Talbot hiked over the Gemmi, a famous pass connecting Kandersteg (where he had been the day before) to Leukerbad. As you might expect, Talbot observed all sorts of interesting effects along the way. One in particular stands out in his letter to his mother, the Lady Elisabeth Fielding sent on 31 July.

I will mention a curious thing I saw in the morning before I went over the mountain. A cliff of immense height rises [above?] Kandersteg, the top of it is fringed with pine trees, that appear from the distance like little nettles, as I have said before. I placed myself just within the shadow of this cliff, so that a part of its edge just hid the sun, and all the [illegible deletion] trees that grew near that point became like the finest gold lace, brightly illuminated – While I was looking at this, I saw something like a shower of gold dust above the trees, the particles of which [illegible deletion] were flying backwards & forwards in all directions – I stayed some time observing them, being one of the most curious things I ever saw – They were either little birds or butterflies, I have not a guess which – There was one brighter & more sparkling than the rest which appeared by fits & starts, I think it must have been a transparent butterfly.

The scene he describes took place not far from Sion, where this copy of allegedly a lithograph, but it might have been an engraving (which itself was a copy of a watercolour painting) originally by Samuel Prout, shows a town square. But I promised you more about crystals and if we get into copies of copies we’ll be here all day…

To continue our foray into polarisation and crystals, the letter above tells us a great deal about time and the nature of visual observation. Notice the sensibility needed to get down visual observations with pen and paper. Talbot was an able writer – more able than most – with a fine sense for the Picturesque that makes reading his travel writing immensely entertaining. He manages to call our attention to not only how he places his body, but also his line of sight, in relation to sun and shadow. To evoke the image of what he saw, he refers to nettles, clearly assuming a great deal of shared botanical knowledge. Talbot not only paints a vivid picture of the scene, he also manages to convey a sense of wonder and intense patience. His vigorous walk halted as his attention was focused on looking and absorbing a scene. Quite likely he also wrote down a few notes about the phenomena straight away in order to recreate it so accurately later in his letter.

The idea that optical phenomena could be arrested for a more leisurely style of observation, as I hinted in my previous blog, is closely coupled with the idea that different ways of observing certain phenomena might also show or reveal different characteristics. Talbot was limited, with his Calotype process, to colours at the blue, violet and ultra-violet end of the spectrum. Talbot’s clear wish to have pictorial evidence of his optical observation of the beautiful cross of dark lines in the rainbow of colours that occur in calcite under conoscopic illumination persisted. But the Calotype proved challenging as a medium of reproduction for highly colourful experiments because of its limitations in reproducing equally all colours of the visible spectrum. You might remember that Talbot had acquired several drawings of the phenomena, and copied them photographically. We will reproduce them again for you so you can compare them directly with the other images below. 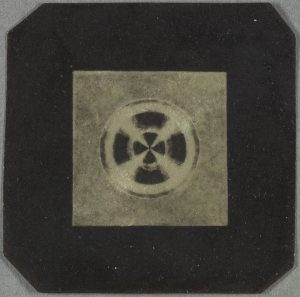 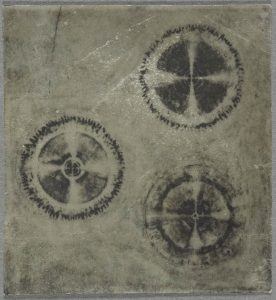 Soon, others followed in Talbot’s footsteps, making and exhibiting monochrome photographs of crystals under polarised light. In 1854, William Crookes exhibited ‘Photographic Copies of the Phaenomena of Polarised Light in Crystals’ at the London Photographic Society. Many of Crookes’s photographs of crystals still exist, although we may never know which ones he exhibited in 1854. Several of the images made in the polariscope on wet collodion on glass are mounted carefully and labelled neatly in handwriting that is much better than his usual scrawl. It makes me want to imagine them as quite striking exhibits, when you imagine those yellow mounts all arranged in a row to draw in the visitors. 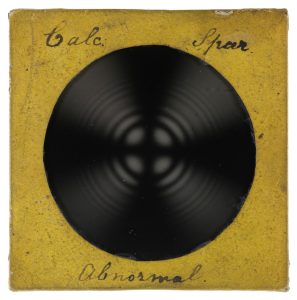 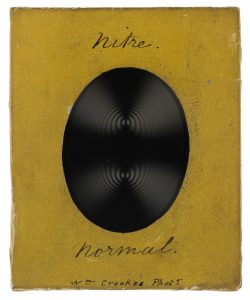 These images of crystals give us a good idea of what Crookes and indeed Talbot, meant to convey by photography by stopping and freezing the phenomenon for leisurely examination and more importantly, for sharing with colleagues. Exhibition of these sorts of images continued through to the 20th century in various photographic media. But one could imagine that the most perfect sort of observing was imagined to be in the full and startling colour as Herschel, Talbot, Brewster and others had originally observed.

As soon as they were able, photographers obligingly tried. In 1901 W. E. Bond used the Sanger-Shepherd process to photograph crystals in polarised light. I have looked for Bond’s images but have yet to find them. Perhaps they are tucked at the back of a cupboard somewhere and will one day come to light. We can imagine what they might be like, because there is, in a small treasure-trove of a box in the George Eastman Museum, in Rochester NY, a collection by Edwin E. Jelley, RPS member and Kodak employee. 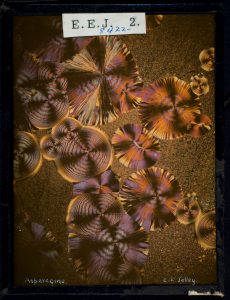 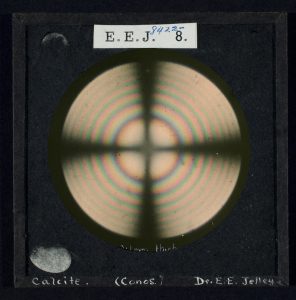 Jelley’s work with the microscope and polarising light has yet to be fully explored, but it is captured here on full colour lantern slides, known more commonly as the Autochrome process. He took most of the series in 1935, making them contemporary with colour negative film and very early Kodachrome. Although this might seem surprising, glass was a popular photographic support in the sciences because of its dimensional stability in variable temperatures. It would also have rendered the images quite easy to project as part of a lecture. So, we come full circle from Herschel’s projection in 1820 to nearly a century later.

All of these images are part of a long-held fascination in observation through polarisation. From Herschel, Brewster and Talbot through Crookes and Bond, to Jelley, these images show a consistent history of photography in fields like crystallography, forming established patterns of observing both crystals and polarisation.