I generally try to avoid talking about myself but one or three of you have noticed that I have been AWOL for some weeks now – Richard hinted at this in a recent note. I also try to avoid meetings, but the one in Oxford on the 15th May about our new backend software, Django, was exceptionally productive.

I meant to leave shortly after lunch with my colleagues Thaddeus, Brian and Jaanika for the rail station to go to the opening of Photo London. Suddenly the Flat Earth Society people asserted themselves and the platter that is Earth began to to tilt. Brian summoned a taxi and Thaddeus accompanied me to the rail station. Again the earth swayed. It was only quick thinking on the part of Thaddeus (thank you!) that kept grass stains on my nose from betraying my violation of ‘keep off the lawn’. Thaddeus led me near-comatose to the station bus stop and soon we were bouncing along in an ambulance to the John Radcliffe Hospital. It turned out that I had experienced a stroke.  And in the best location – Oxford’s John Radcliffe Hospital is a world leader in stroke research and treatment. 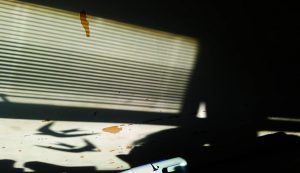 It is difficult to describe what it is like living – trapped – within the artificial landscape created by a stroke. Our sgrafitto artist is the ever-unpredictable Errant Cart, whose interactions with the shadows from the setting sun keep the blank wall opposite me lively…. Waking up surrounded by earnest young men and women, their black shirts emblazoned boldly Hyper-Acute Stroke Unit speaking in urgent hushed tones about what turns out to be your body and your mind.

You may be relieved that it is unlikely that you will be hearing from  me anytime soon.  This little post  has consumed more than half a day of excruciating concentration.  But my colleagues and supporters will do just fine.  They have zoomed past me, which was the original goal, and I am so proud of and thankful to all. Brian and Jaanika have kept plugging away on the core project, Thaddeus has steered the project away from technical shoals, and Richard Ovenden and Hans Kraus have maintained the diplomatic front.

I’ve been intrigued with this gentleman since I first met him forty years ago.  What a modern pose. Not unlike an  exceptional carte-de-visite around 1870, it in fact dates to early 1841.  I know of no parallels to it for the period save for a daguerreotype or two.  It is the only known print (negative not identified) in a small album – Talbot’s No. 11 – that contains 22 small prints of diverse subjects, some positively dated.