It is reassuring to know that the Talbot catalogue raisonné will continue to be freely available online long after we have added the last image to the website at the end of this year. However, this may be the last chance we have to officially celebrate the birth of the calotype on this forum (although I’m sure there will be many other forums in the future that will continue to celebrate it unofficially). In the meantime, we want to go out with a bang. So, instead of selecting one fine calotype for dissection in detail as Larry has done on previous calotype birthdays, this year we thought we’d simply offer you a visual feast to showcase the sheer versatility of Talbot’s calotype process. In other words, a cornucopia of calotypes. 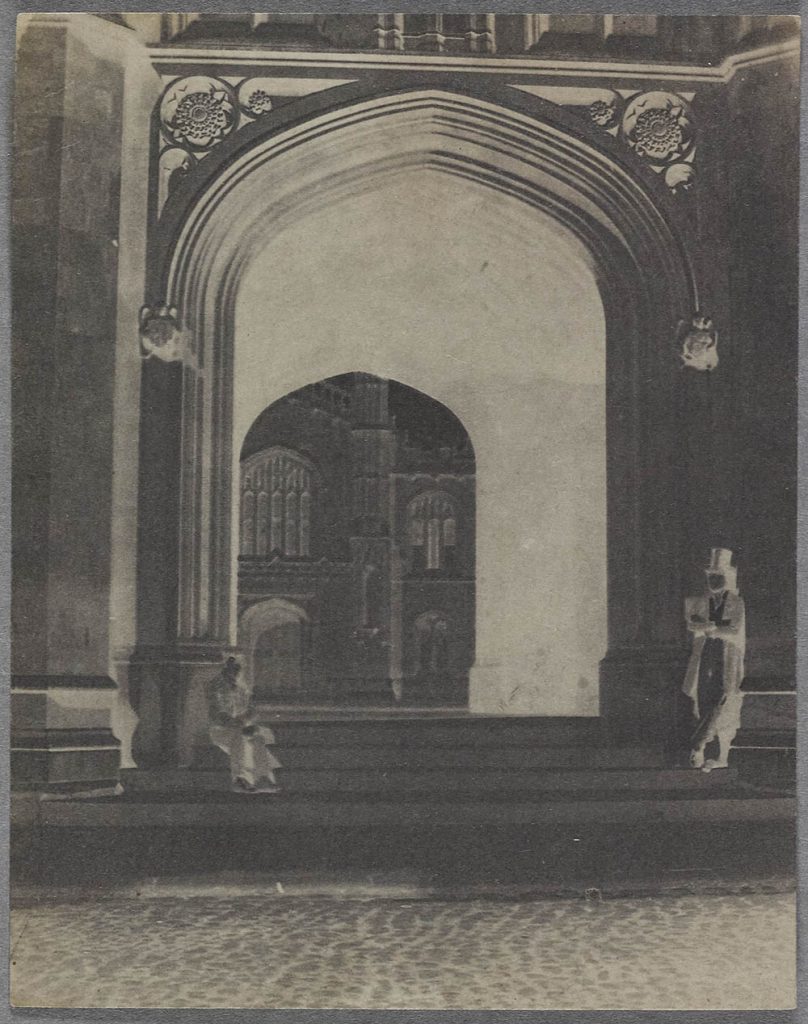 This year sees the calotype reach the ripe old age of 178. Larry first celebrated Talbot’s breakthrough discovery of what came to be known as the calotype negative, on its 175th birthday way back in September 2015. As Larry has already written extensively (and eloquently) on the subject I don’t want to delay access to this week’s selection of calotypes. So, I’ll try to keep it short and say the reason for our annual celebration is Talbot’s discovery of a mysterious invisible image, some time between the 20th and 23rd of September 1840. Up until then Talbot had the know how to produce photographic negatives using a system of his devise, otherwise known as photogenic drawings, but these beautiful chemical images could take almost an hour to materialise, whether a camera was used or not. With Talbot’s almost accidental later discovery of the existence of an invisible, or latent image that could be chemically developed by the addition of Gallic acid he revolutionised matters.

With this new, faster development Talbot overcame various technical issues. The result was the calotype negative: a sophisticated, versatile process capable of producing remarkable photographic negatives in different atmospheric conditions, all in a matter of minutes or less! Not only was the new process quicker, the resulting negatives were of a higher quality, whether a camera was used or not. And with that, let’s take a look… 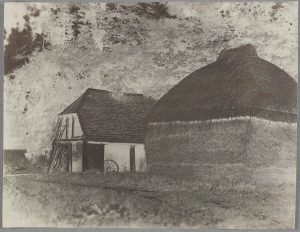 Talbot made his breakthrough discovery at his ancestral home, Lacock Abbey. This lesser-known view shows the Abbey as an agricultural industry rather than an historic architectural seat of a member of the landed gentry and one-time Member of Parliament. 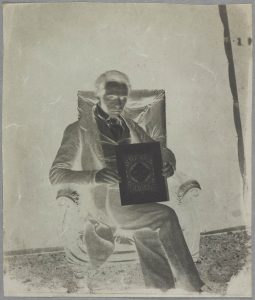 Once Talbot had refined his photographic process he took the bold decision to produce a photographically illustrated publication to promote his discovery: “The Pencil of Nature” had twenty-four photographic plates published in six fascicles between 24 June 1844 and April 1846. Here we have Talbot’s partner in crime, Nicolaas Henneman, proudly photographed in negative with one of those fascicles balanced on his knee to show the cover. It’s thought that the cover was probably designed by the notable, Owen Jones. It is strange how certain features seem more noticeable when viewed in negative than in positive. For some reason my eye keeps wandering away from Henneman towards the edges of the backdrop behind him, and every time I see a backdrop in a Talbot photograph I wonder what’s behind it. 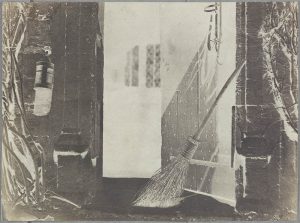 This is (possibly) the image Talbot is best known for. So much has been written about it that I’m going to resist the opportunity to add to that burden. As we’re talking about calotypes, all I want to make is the simple observation that when viewed in reverse this now looks like a night time view of a brightly lit interior, as opposed to the gloomy interior we’re all familiar with from prints made from this negative. 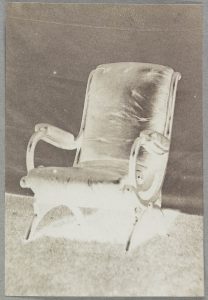 Talbot and Henneman never did get around to producing a fascicle of “The Pencil of Nature” dedicated to portraiture, but it’s almost certain he did plan to. In the meantime, I leave you with a symbolic reference to that unrealised fascicle in the form of an empty posing chair, waiting to be filled. Would you be brave enough to accept Talbot’s offer to take a seat and have your portrait taken using his new photographic process? 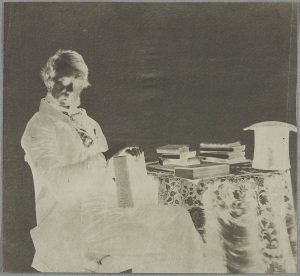 The calotype is wonderful, and was revolutionary, but it wasn’t perfect. For a start, it wasn’t instantaneous. Talbot achieved a remarkable feat with the calotype when he reduced the exposure time from an hour down to a minute, but try to sit perfectly still for sixty seconds right and see how tricky it is. In that minute a simple thing, like the passing of a breeze can be discerned in the movement of leaves on trees, causing them to blur the image. Conversely, the calotype renders the surface of a body of water glacially smooth because any ripples failed to register. Likewise, the edge of a tablecloth can flutter causing that part of the photograph to be blurred. Even so, we shouldn’t be so negative. These small signs show the passage of time, and reminds us that time waits for no one. 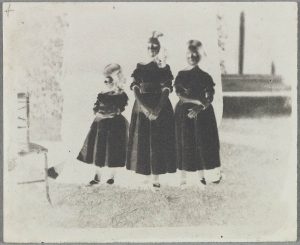 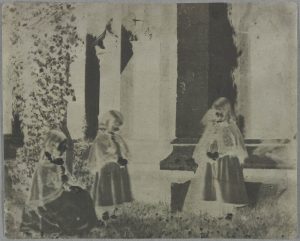 These two group portraits of Talbot’s daughters show another potential calotype problem. The calotype starts out as a sheet of paper, which is far from transparent. The paper fibres that absorb the photosensitive chemicals contribute to the soft, sometime painterly appearance of the photographic image. But the resulting lack of detail can make it difficult for us to distinguish between Talbot’s daughters. As you can see here, the three girls were often dressed in matching outfits with similar hairstyles. It’s easy to see the eldest and youngest in the first portrait because the girls are stood upright and close together. But separate them and pose them differently, and it’s not so simple to distinguish one from the other with certainty. 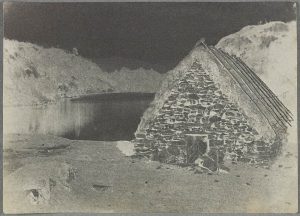 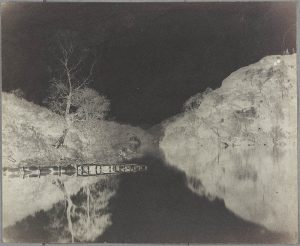 In the October of 1844 Talbot and Henneman spent a fortnight in Scotland. Their autumnal photographic expedition resulted in, “Sun Pictures in Scotland”, published the following year in 1845. This new photographically illustrated volume contained 23 plates inspired by the work of Sir Walter Scott and was sold as a single bound volume by subscription only. For me the revolutionary, or revelatory aspect of this publication is that no text accompanies the photographs. In that sense it is the first photo-essay – in idea ahead of its time if ever there was one. As for this pair of calotype views of Loch Katrine, the texture of the stone walls of the hut leap out of the calotype, where as it tends to be more muted when viewed as a salted print from the negative. While the remarkable composition of converging triangles in the second view verges on abstract forms when viewed as a calotype. 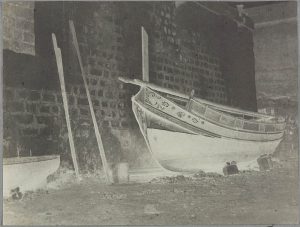 No review of the calotype would be complete without at least one example by the maestro, Richard Calvert Jones. His calotypes are seldom anything but a technical tour de force of the medium. Need I say more. 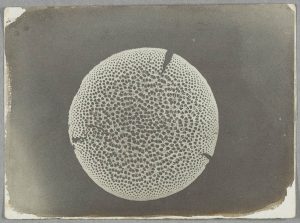 The word, ‘calotype’ is from Kalos, the Greek word for ‘beautiful’. Of all the calotypes to feature in today’s cornucopia I’d say that this one is the most deserving of that title. As Talbot was a man of science it would be wrong to leave out a scientific calotype, in this case a cross-section of a plant stem. To get this degree of photographic detail Talbot would most likely have had to call upon his solar microscope. 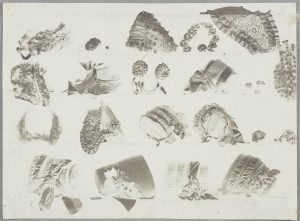 At first glance this image may seem to be scientific, possibly showing an array of exotic diatoms or random botanical specimens. It is, however, Talbot’s attempt to recreate a milliner’s shop window display. My question to Talbot is, did the women who lived at Lacock Abbey consent to their lace, bonnets and bows being gathered up so that they could have their photographs taken? Not only is the resulting composition a fashion-historian’s delight, it may also be one of the most baffling and potentially abstract compositions Talbot ever created. I also include it here to represent a blog that got away as I’ve harboured a notion that it might be fun to track these bonnets down in photographic portraits which show the bonnets as worn by their owners. 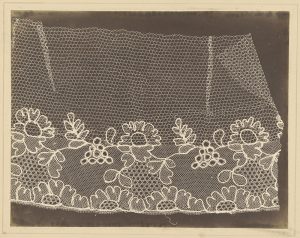 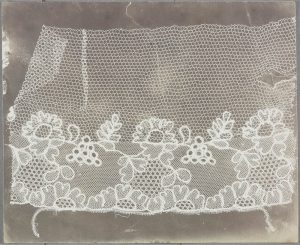 Consider the poor fragment of lace used to create these two calotype negatives. Starched to within an inch of its life, it was brought out over and over again and pressed into service. All in an attempt to produce near identical plates for ‘The Pencil of Nature’, just so that Talbot could illustrate his publication with an example of the very calotype process he discovered. Only, the lace eventually began to show obvious signs of wear and tear. It’s another blog that got away as I’ve always been intrigued as to what would result if every photograph of the starched piece of lace were to be placed in sequence, from “new” to “care-worn”. The calotype would chart the lace fragment’s slow and inevitable decline.

And so, we come to the close of another calotype birthday celebration. It’s worth mentioning that in this digital age there are still practitioners of Talbot’s calotype process. As well as professional practitioners, in university and college photography departments students are putting away their digital cameras in favour of the calotype. It may be an historic alternative photographic process, but the calotype is far from redundant and we wish it many happy returns.