Published in the first number of The Pencil of Nature in June 1844, the third and fourth plates demonstrate the particular virtues of allowing Nature to handle the task of drawing.  Articles of China and Articles of Glass brilliantly showcase the descriptive properties of photography.  Talking about the china, Talbot speculated that “from the specimen here given it is sufficiently manifest, that the whole cabinet of a…collector…might be depicted on paper in little more time than it would take him to make a written inventory…and would a thief afterwards purloin the treasures—if the mute testimony of the picture were to be produced against him in court—it would certainly be evidence of a novel kind…. The articles represented on this plate are numerous:  but, however numerous the objects—however complicated the arrangement—the Camera depicts them all at once.”  In fact, more than a century later, a 1950s tourist pilfered some of this china from Lacock Abbey – continue to keep your vigil up on ebay but there is no record that this photograph was brought into evidence at the time. In the next plate, Talbot went on to observe that “the photogenic images of glass articles impress the sensitive paper with a very peculiar touch, which is quite different from that of the China in Plate III…. White china and glass do not succeed well when represented together, because the picture of the china, from its superior brightness, is completed before that of the glass is well begun.”

In addition to their powers of description, another tie between these two iconic images is the set of shelves, plain deal boards with a dark backdrop.  The ‘Peripatetic Shelves.’

It shouldn’t be surprising that Talbot started photographing the bookshelves spread out through Lacock Abbey.  In December 1839 he wrote to his friend Sir John Herschel: “I find that a bookcase makes a very curious & characteristic picture: the different bindings of the books come out, & produce considerable illusion even with imperfect execution.” The image he sent Herschel was taken on 26 November 1839 and is one of my favourites.  Many of these are not positively dated, but the left hand one above is in an album containing primarily images from 1840, right after Talbot’s discovery of the calotype, to 1841.  A circa 1841-1842 dating is appropriate.  Although there are windows opposite these shelves, the sunlight was diminished by the time it bounced off their contents, leading to long exposure times.  That is part of the reason for the lack of clarity, for as the earth turned the shadows moved with it, softening the outlines of the gilt stamping on the bindings.  Still, Talbot’s idea of representing and cataloguing sets of related objects was clearly beginning to take form.  The photograph on the right is a typical scene that Talbot would have looked at daily in the Abbey.  On the left, he has begun to figure out how to extract a photograph from this scene. 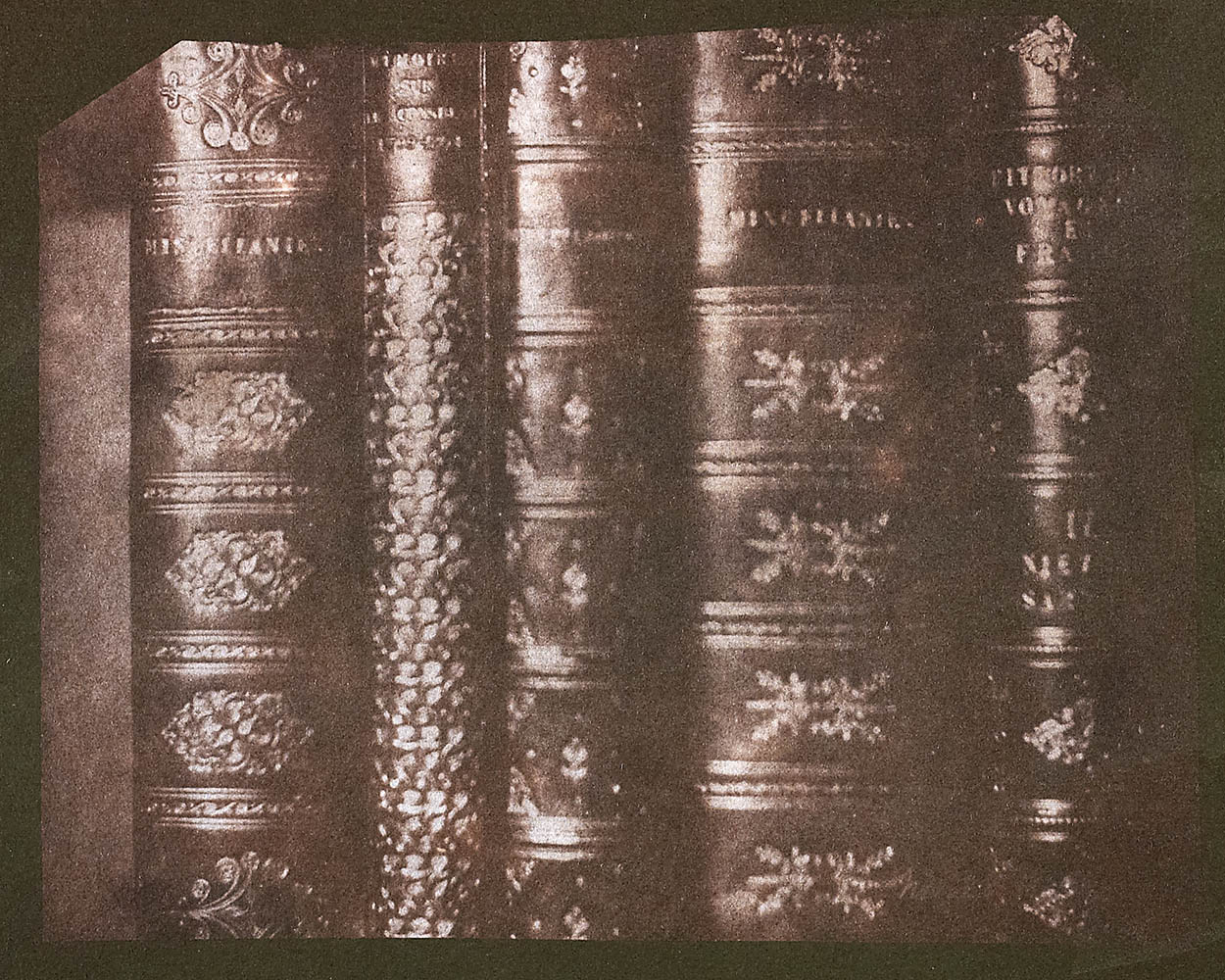 At some point there is a dramatic shift in the clarity and sparkle of these images.  Frustratingly, we have absolutely no positive dating for this image or the ones that will follow, but I think it is safe to assume that they range from perhaps 1842 to early 1844.  In his comment on Articles of Glass, Talbot explained that the lens “should be diminished by placing a screen or diaphragm before it, having a small circular hole….  The resulting image is more sharp and correct” even though “it takes a longer time to impress itself upon the paper.”  Today we know these holes as f-stops and those who are photographers, particularly those who remember using a view camera, know that ‘stopping down’ to a smaller diaphragm opening both increases depth of field and rids most lenses of any inherent aberrations that might limit their sharpness.  This little negative is probably a trimming from a much larger one, making the sharpness challenge even more severe.  Using a small diaphragm opening to increase the sharpness was certainly a factor, but length of exposure and quality of light also come into play.  This level of sharpness could only be achieved with good skylight or open sunlight. 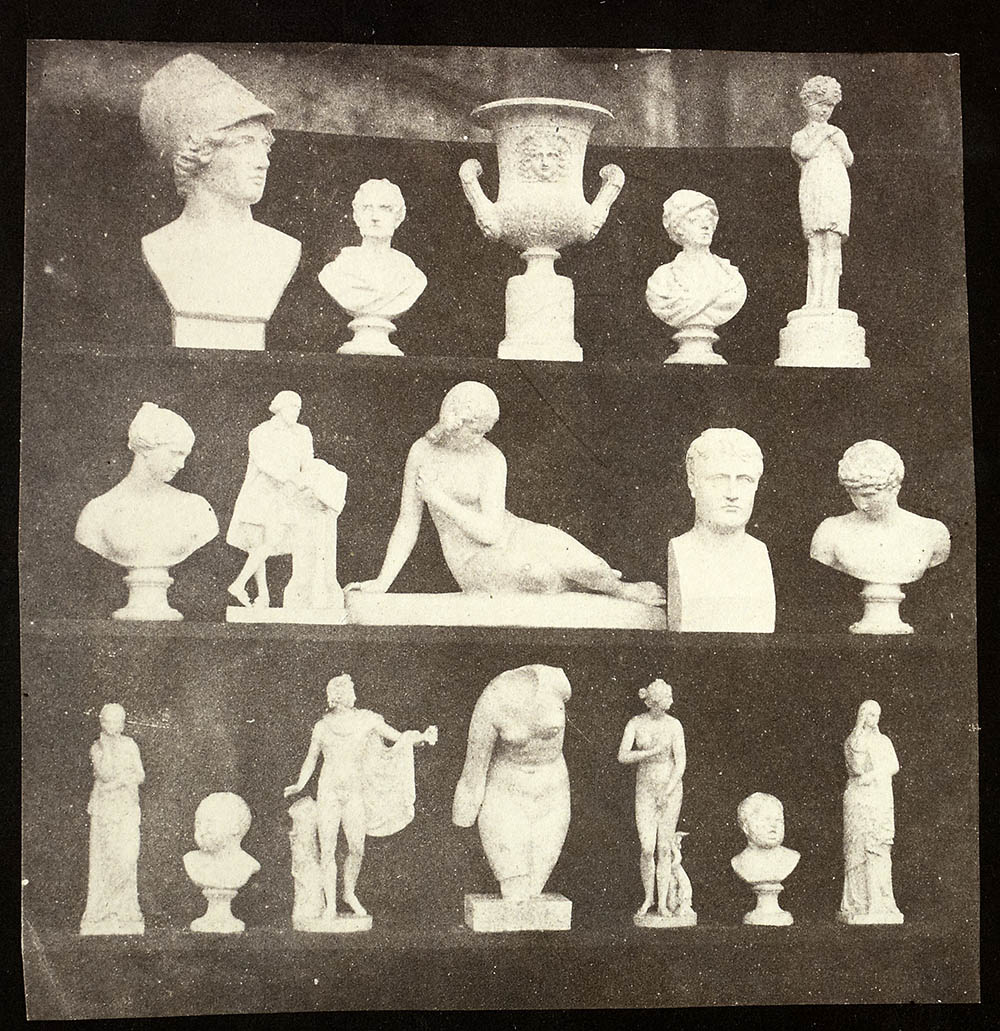 I doubt that Talbot carefully eliminated the background of these images out of a sense of deception, but rather to keep the visual concentration on the subject at hand.  We have only a handful of examples where the background sneaks in, but they confirm that Talbot began taking his set of shelves outdoors to take advantage of the light.  Peeking over the top of the shelves here is the distinctive architecture of Lacock Abbey’s Cloister garth. 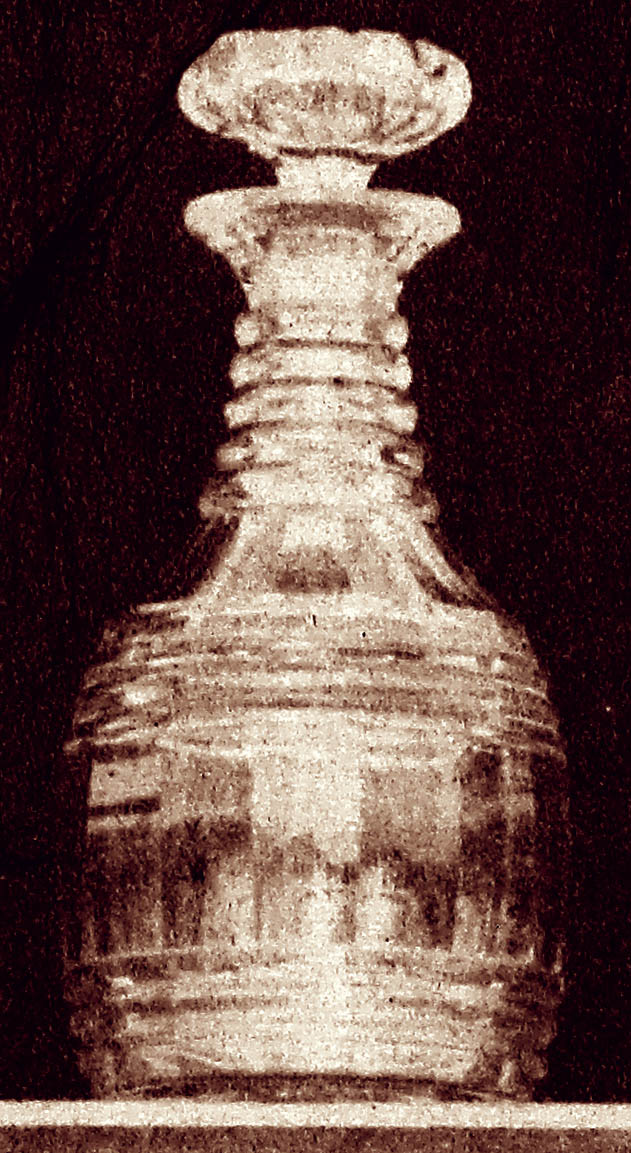 Talbot would have sought out sheltered places at Lacock Abbey to avoid the wind disturbing his camera and fortunately this complex building offers a number of possibilities. While the South Front (home of the latticed Oriel Window) got plenty of light and made it a varied subject itself, it was relatively exposed to breezes coming off the expanses of lawn and probably proved less than ideal for studies like this.  He might have set up his shelves in the North, or Tudor Courtyard, the scene of The Open Door and other photographs.  It was convenient to the kitchen (the source of chemicals and containers) but this was a working courtyard, with carriages and horses and the bustling activity of servants.  Fortunately, just as the nuns had experienced long before his time, Talbot had the tranquility of the Cloister available to him.  It is large enough that sunlight reaches its interior much of the day.  In fact, its walls casting large patches of shadows that were gently filled by reflected light from opposite walls may well have been an advantage.  Pure direct sunlight is great for casting sharp shadows but too harsh in contrast for most subjects. Shadows partially filled by reflected light are sympathetic to most subjects.  Glass is a particularly good witness to what is happening on the other side of the lens and Articles of Glass teases us with a multitude of reflections and refractions in its subjects.  There will be dozens of little portraits of Talbot in there (perhaps someday a clever bit of software will enable us to extract them) and there is also evidence of the whole scene.  Talbot might have hung a large drape to ‘tent’ the glass.  Or perhaps the contrasting patches that we can see reflect the openings on the stone walls opposite. 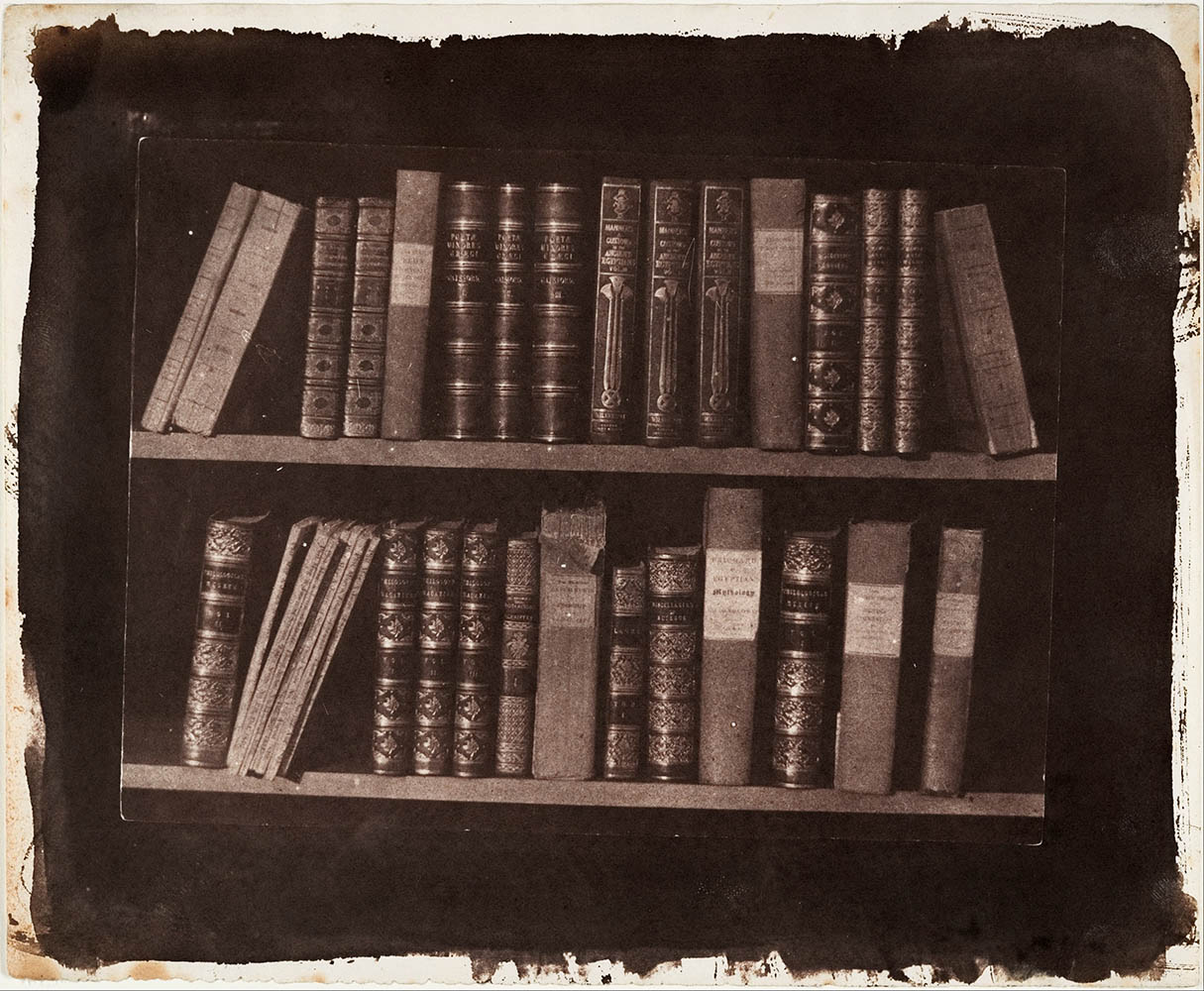 Another famous plate from The Pencil of Nature is the Scene In a Library.  Talbot’s text here completely avoids talking about the setting, indeed speculating on the rays of a light inside a room, but the clear implication is that this depicts his own library.  His title is Scene In a Library, not A Picture of Bindings. 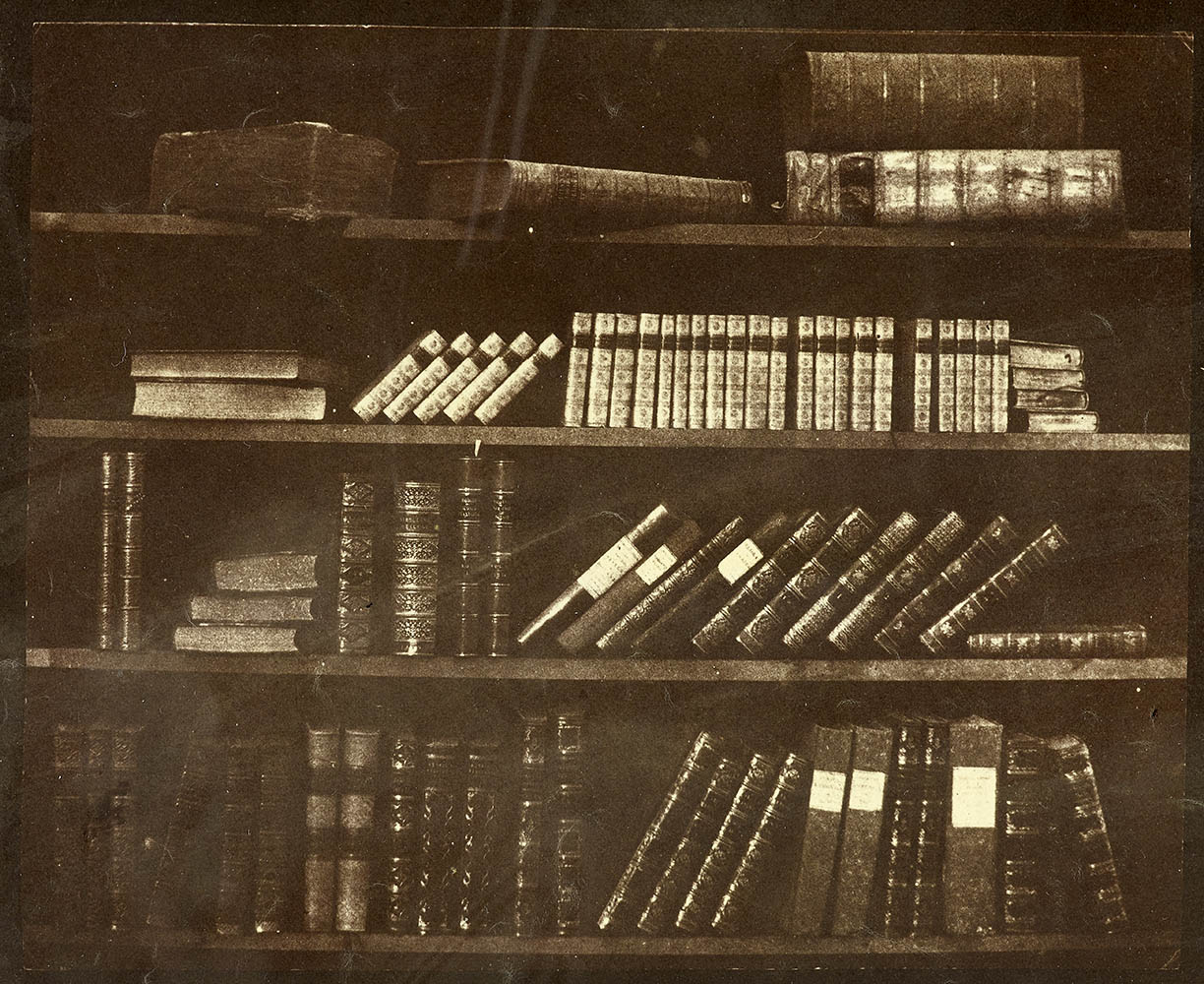 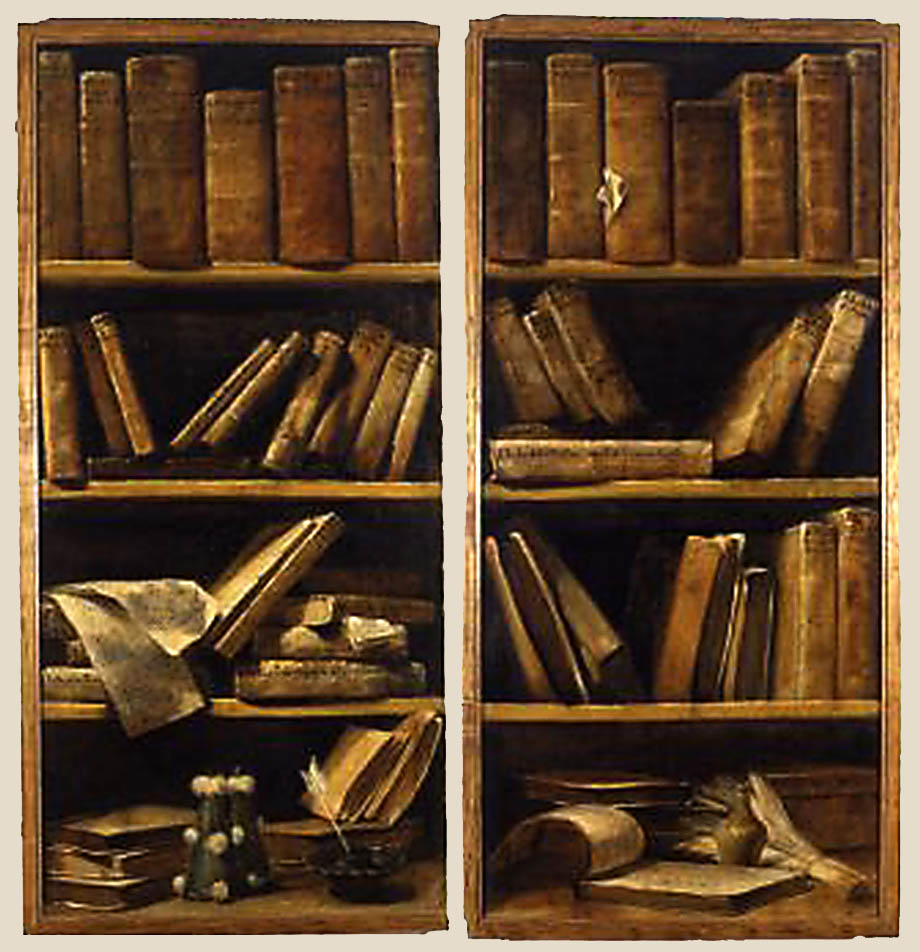 Was Nicolaas Henneman, or perhaps another servant, assisting Talbot in setting up the scene here, or do we see the aftermath during the process of disassembly? Or was this meant to imply a less formal or less organised section of the library? The larger tomes askew at the top look fairly natural, as if somebody was just barely able to reach the top shelf in order to shove a volume up there. But the tumbled set in the middle is more as if one has taken one too many volumes out of a row for consultation. In The Pencil of Nature, Talbot made explicit reference to the parallels between his photographs and Dutch paintings.  Was he also influenced by still lifes such as Giuseppe Crespi’s marvelous adornment of library doors?

What was the nature of this set of shelves?  They turn up again and again in all sorts of variations, nearly three dozen that I’ve traced so far, but I have not found any reference to their actual use.  Sometimes Talbot employed a full set of four shelves, sometimes three, sometimes only two (I’ve not found an instance of only one shelf being depicted). Sometimes, as in the casts farther above, the shelves were totally draped with a black cloth, making a display stand. More often the cloth was behind, creating the illusion of an interior environment.  Was the set of shelves a bespoke unit, perhaps cobbled together by John Gale, the Lacock village carpenter?  Were they some sort of ad hoc arrangement of boards and supports (the way students used to make bookshelves with cinder blocks)?  Were they adapted from a potting cart drawn from the greenhouse, perhaps even one conveniently on wheels, that could be adjusted to changing angles of sunlight? 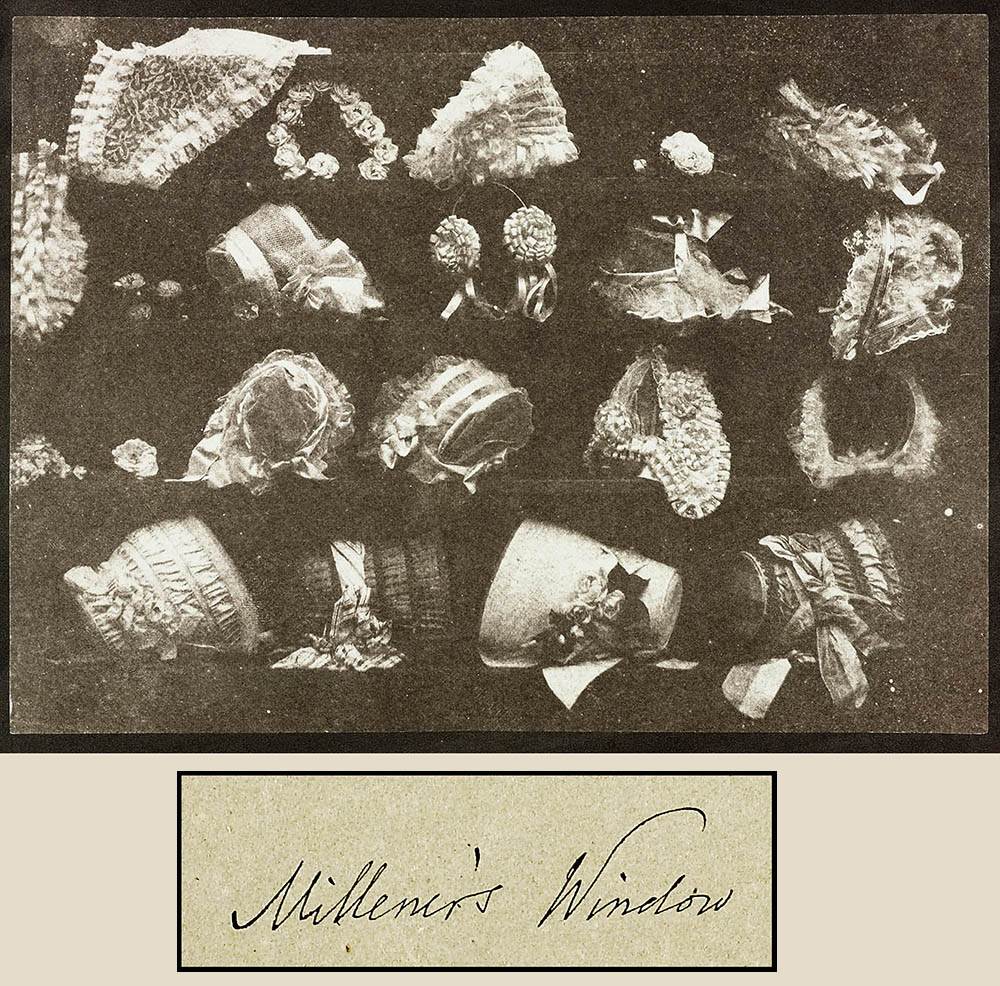 Titles shape expectations (something artists seem to be counting on more and more these days).  In this case, Lady Elisabeth’s fanciful title in one of her albums draws our thoughts away from a domestic collection towards an on-street recording of a commercial situation.  Of course these bonnets were extracted from the dressers of the ladies of Lacock Abbey and artfully arranged on The Peripatetic Shelves.  They are delightful in their variety, stimulating our imagination about Victorian lifestyles while at the same time giving photography a good platform in which to demonstrate its descriptive virtues.  But just to show the power of words, Lady Elisabeth’s personal title has also stimulated the imaginations of more recent historians.  The most common speculation that I have seen repeated is that this must have been taken by Henneman in his base of Reading, for this market town was one of the first to sport large plate glass display windows in its shops.  Although this is one of the prints that Henneman offered for sale commercially, its birthplace was certainly Lacock Abbey. Talbot seems to have had a bit of fun with this series of photographs.  This tumbled tumbler, like the Books in Disarray, may have simply recorded the perils of arranging household objects on temporary shelving rather than in the more secure environment of the pantry.  But Talbot must have perceived the additional interest of disorder within order and seen it as an interesting photographic subject as well. 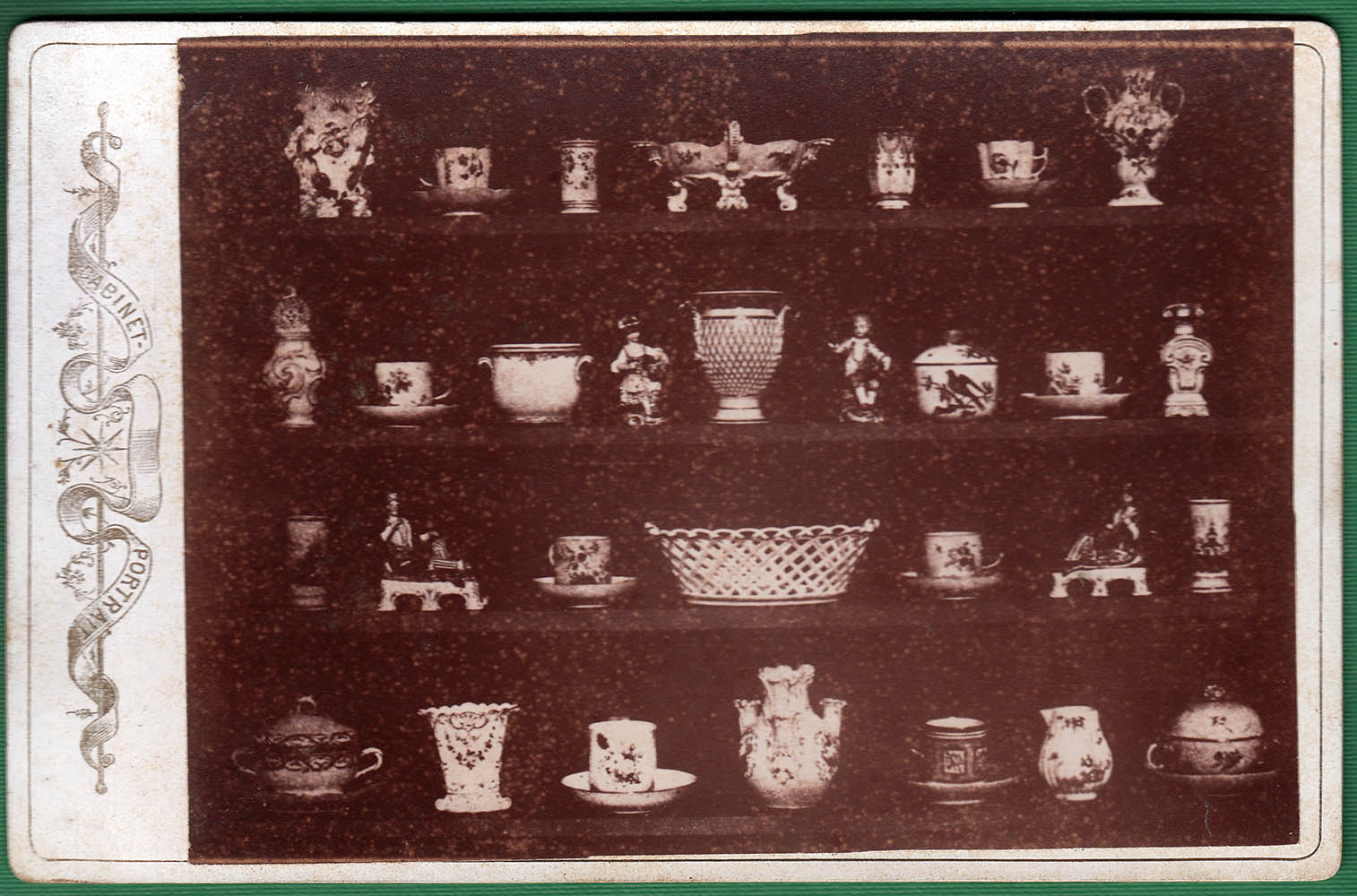 We’ll end with a little mystery.  Probably in the 1870s or 1880s, perhaps in Talbot’s lifetime, perhaps after, this cabinet card copy of Articles of China was produced.  Why?  There is no studio identification.  Did one of Talbot’s children simply like the image?  Was it produced for a philanthropic fundraiser?  As far as I know this is a unique example, preserved in Lacock Abbey and now part of the Bodleian’s collection.  I would be delighted to hear from anybody who has found a similar one in a jumble sale or photographica event.