Myself and the cats were amused to get a staff notice from the University this week, warning that the temperature in Oxfordshire might approach 30 degrees C (86 F) and offering advice on how to cope with the extreme heat.  Here at the colonial Rock House editorial office in Baltimore, we grumble only slightly when it hits 100 degrees (38 C), exacerbated by humidity of a similar number, but I do have to confess that the thought processes and indeed the general pace of life slows down during the summer.  So, unless there is some breaking news, I imagine that the blog postings for the balance of the summer will take the form of brief looks at a different Talbot photograph each week.  The choice will be random and you are encouraged to suggest images that you might like to see. 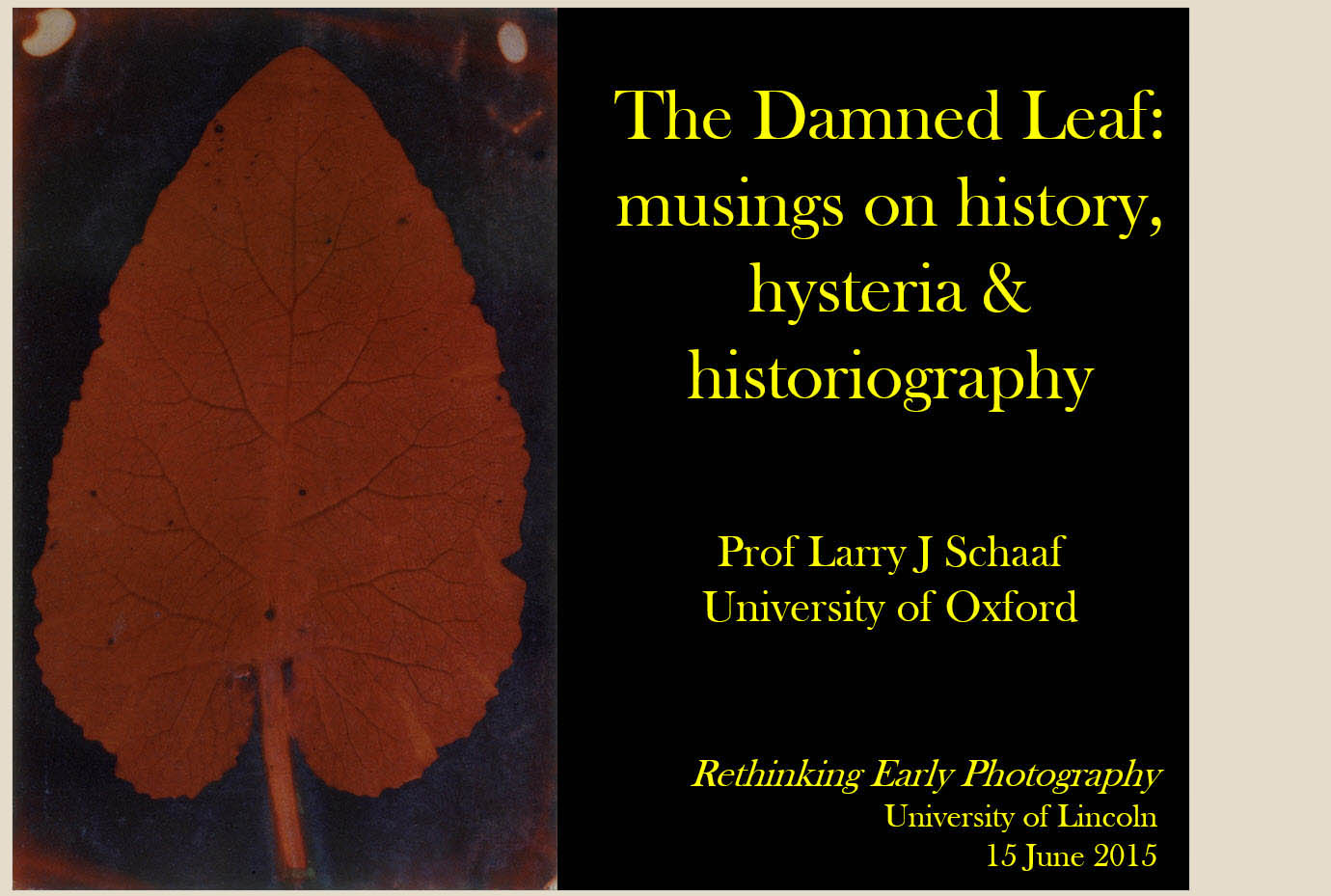 A fortnight ago this blog carried a preliminary summary of a talk that I gave at the ‘Rethinking Early Photography’ conference at the University of Lincoln.  Thanks to the extraordinary efforts of photographer Adam O’Meara, you can now view the full talk online (the other conference keynotes will also be available).  Is it wishful thinking to believe that this should put the simmering brouhaha over this lovely photograph out to pasture?  The controversial leaf and its five known companions were made by the pioneering Bristol photographer Sarah Anne Bright, the latest addition to our canon but surely not the last, and I hope that her productions stimulate further research into what appears to be a hotbed of photographic activity in the Bristol area in the pivotal year of 1839.  And perhaps the maker of her photogenic drawing paper, William West, published sufficient clues about his fixing process to guide conservators and curators on handling these precious early objects. As far as I know, he published only once on this, which you can see here.

And now on to Summer Pleasures.  One of the most fascinating aspects of photography is its dualistic and complex relationship with time. The German title of Hubertus von Amelunxen’s book on Talbot is Die Aufgehobene Zeit roughly translates into “Time Suspended.”  I believe that the phrase “Time Reprieved, Time Retrieved” originated with him as well. It is a paradox that while a photograph is inescapably tied to a particular moment in time, it simultaneously immortalizes that moment as well.  As one contemporary reviewer of The Pencil of Nature put it, “photography has already enabled us to hand down to future ages a picture of the sunshine of yesterday.” 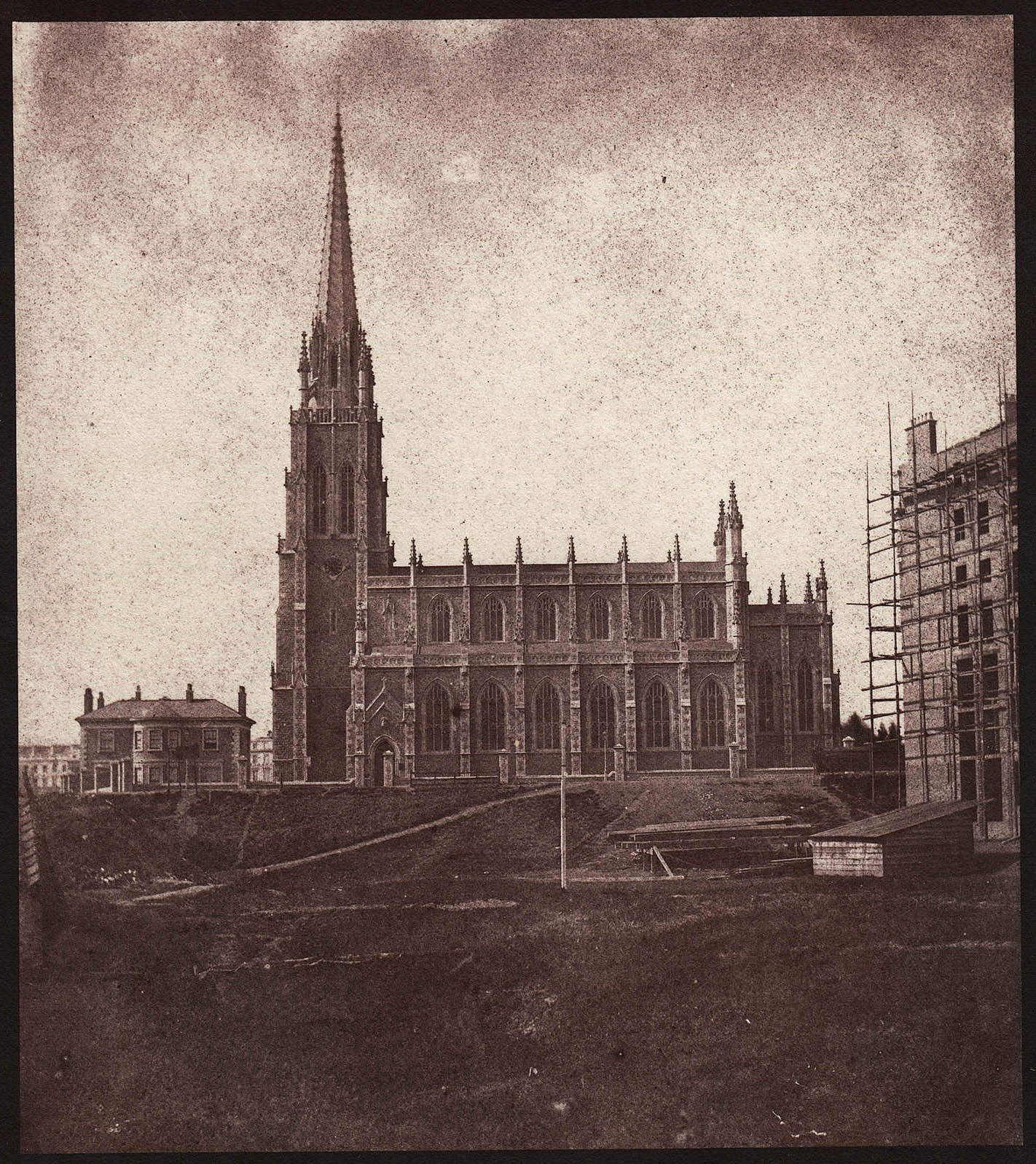 The imposing structure of London’s Holy Trinity Church was hastily erected between March 1845 and its consecration in July 1846.  Its 250 foot high tower briefly dominated a landscape of intense construction north of Hyde Park, an explosive growth stimulated by the 1838 railway terminus for Brunel’s Great Western Railway, itself to be expanded a decade later into Paddington Station. Thomas Cundy’s design immediately prompted criticism that “it is externally a heap of misapplied ornament; battlements, finials, gargoyles guiltless of gutters, panellings &c &c. all carved in good stone, figure in tasteless confusion…such monsters are the inevitable birth of a transitional age like ours.” With Talbot fascinated by railways  (as long as they did not cut through his grounds at Lacock Abbey), in June 1844 he hired rooms at 32 Sussex Gardens near the terminus, an area now familiar to modern travelers as a long street rich in small hotels convenient to Paddington Station.  His interest was sustained, for the following summer his mother Lady Elisabeth  noted that “H. went to live in Sussex gardens.”  By then the church construction was far enough along to permit this recording.  Talbot positioned his camera to the northwest of the present Paddington Station, facing North; the monumentality of the church was enhanced by a low camera angle (in fact, a position dictated by the local requirement to elevate the roadways and building sites – so much photographic ‘intent’ is the result of such restrictions).  The grand townhouse with the bow window to the left was also new, first appearing on maps by 1846.  Weakened by a bungled 19th c conversion, the decaying spire of Holy Trinity was taken down in 1972, and with a congregation weakened by changing demographics, the balance of the church was demolished in 1986.  An agreement reached at the time to convert the ecclesiastical grounds into housing for the poor mysteriously gave way to the development of luxury flats, but the three views Talbot took of the construction of Holy Trinity timelessly continue to preserve the sunshine of yesterday. 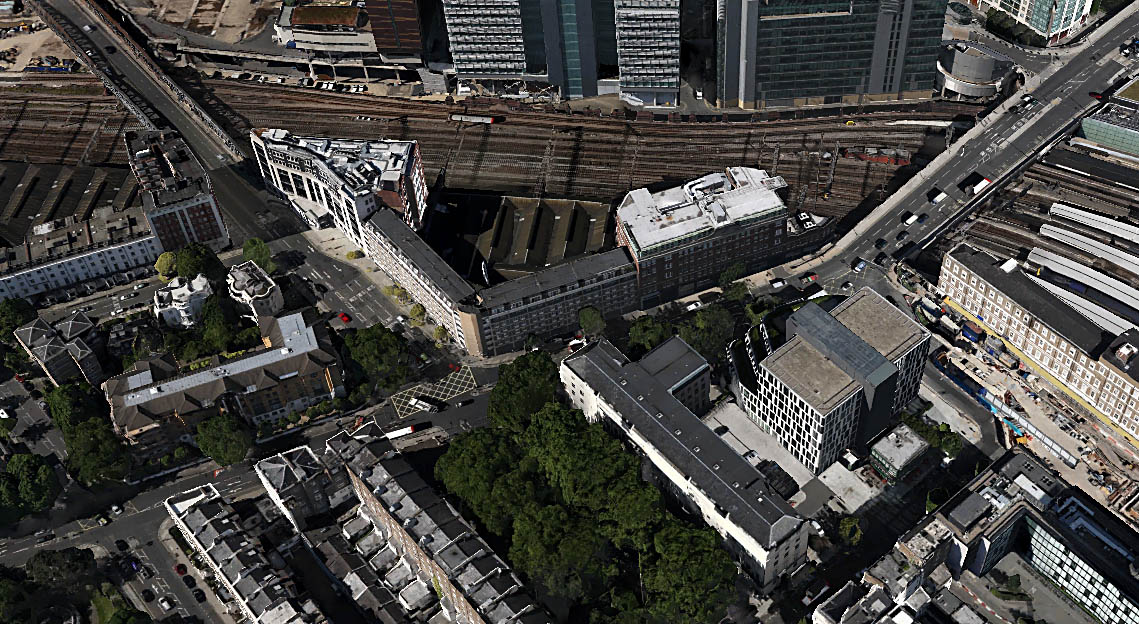 If one takes a Harry Potter besom view of the scene today (courtesy of Google Earth), the area has evolved almost beyond recognition. The tracks exiting the rear of Paddington Station still head off towards Reading and beyond, but if you look closely at the middle of the left edge, the distinctive bow window of the house serendipitously captured by Talbot links us to the past.  Talbot’s photograph remains the most evocative statement on urban progression in this area.