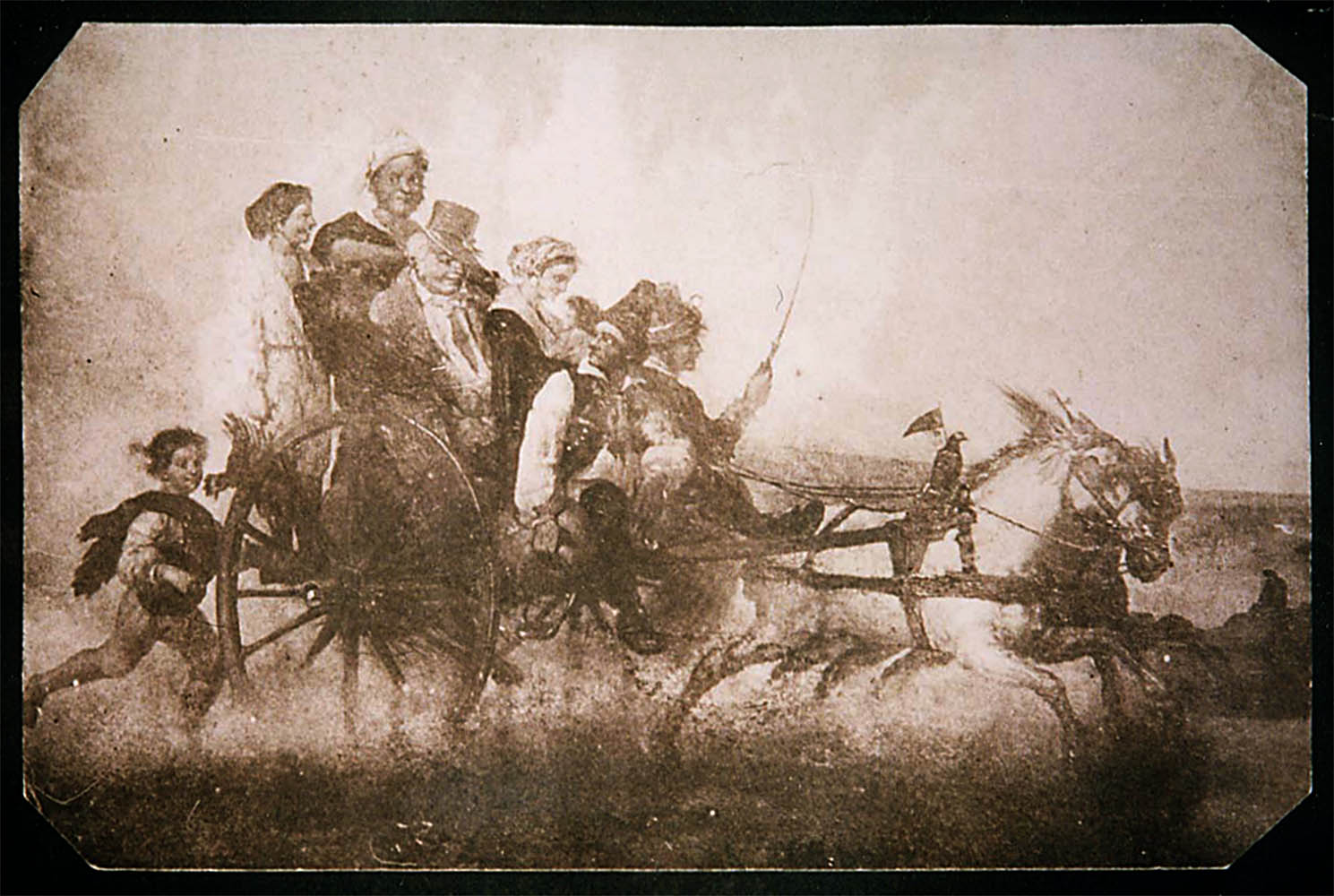 Talbot’s Neapolitan Conveyance is a copy of an oil painting then at Lacock Abbey.  Art historians sometimes conveniently overlook the fact that Talbot has been their main tutor, for far more works of art have been considered by them via photographic reproductions than in the original.  Whether it was from faded examples drawn from the dreaded slide library, illustrations in books, or today increasingly from Google’s image search, such reproductions are so commonly employed that their influence is almost invisible.  In Talbot’s day, this application was far more special, for while the relatively new art of lithography was having a democratizing effect as visual reproductions were spread across a broader spectrum of society, even they were expensive and time-consuming to produce.  Photography promised not only greater accuracy, but also increased speed of production and lower costs, bringing a museum without walls to nearly everyone. 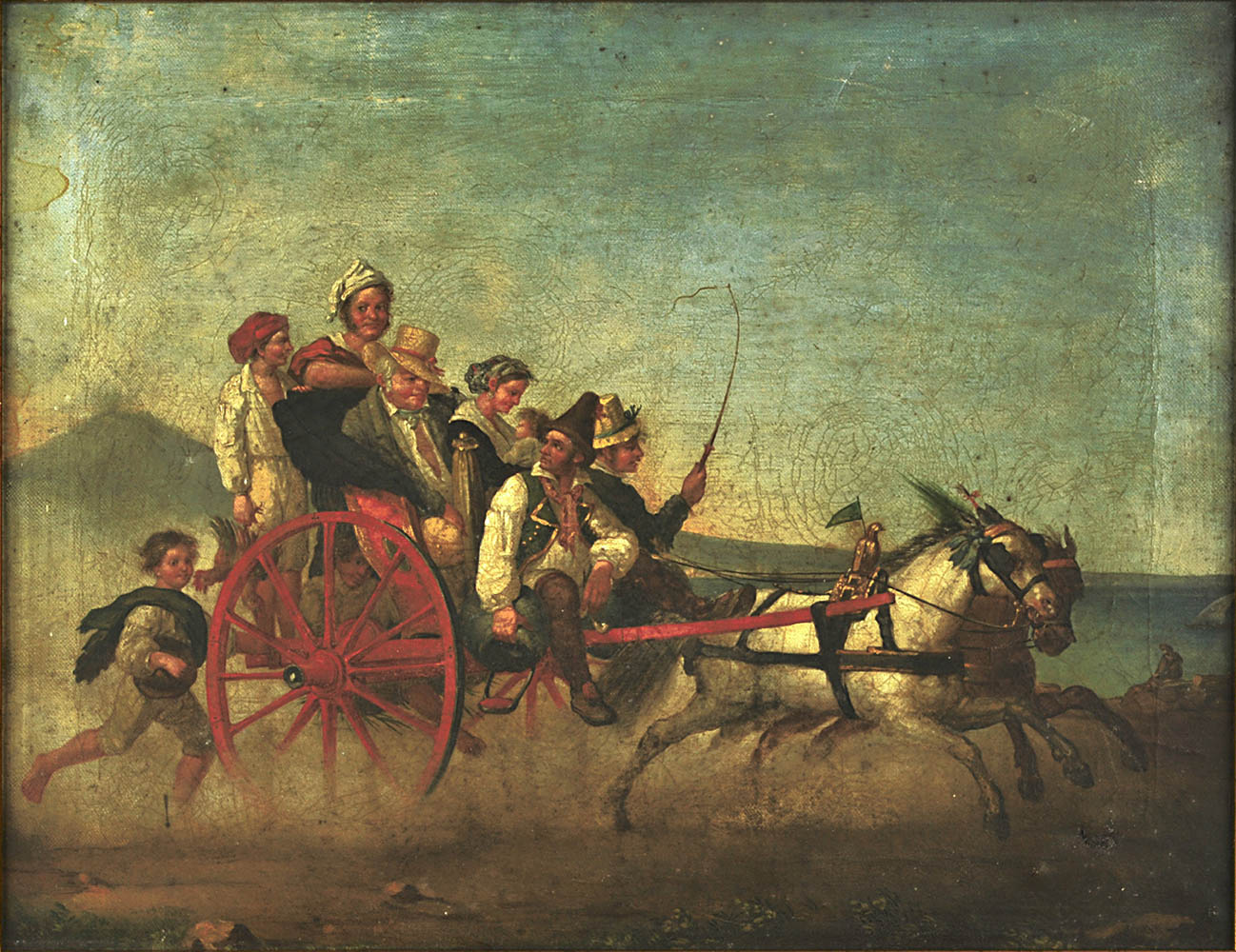 The original oil here was itself probably a copy, most likely acquired as a tourist souvenir during one of the family’s many visits to Italy – one print from Talbot’s negative is inscribed ‘from an oil painted at Naples.’  About 36 x 43 cm. in size, Talbot’s camera reduced it down to a more manageable area of about a quarter of that, another of photography’s powers.  Most of the colours were translated remarkably well into the photograph, although sadly Etna has been lost; the predominantly blue colours of the sky area registered too strongly in the negative.  Talbot’s son, Charles Henry, recorded that the original was still hanging in Lacock Abbey in 1889, presumably still in the now-lost frame included in another of his father’s photographs.  This photographic copy must have been an indoors winter subject for Talbot; in January 1844 he acknowledged receiving a large quantity of prints from Nicolaas Henneman, including eleven copies of ‘Neapolitans in a Carriage.’ Talbot anticipated using this in The Pencil of Nature (originally projected as having 50 prints rather than the 24 eventually realized).  One of his manuscripts indicates plans to include ‘Neapolitan Caratella’ in fascicle four; ‘caratella’ was almost certainly a phonetic spelling for carrozella, a Neapolitan regional term for a horse-drawn conveyance. 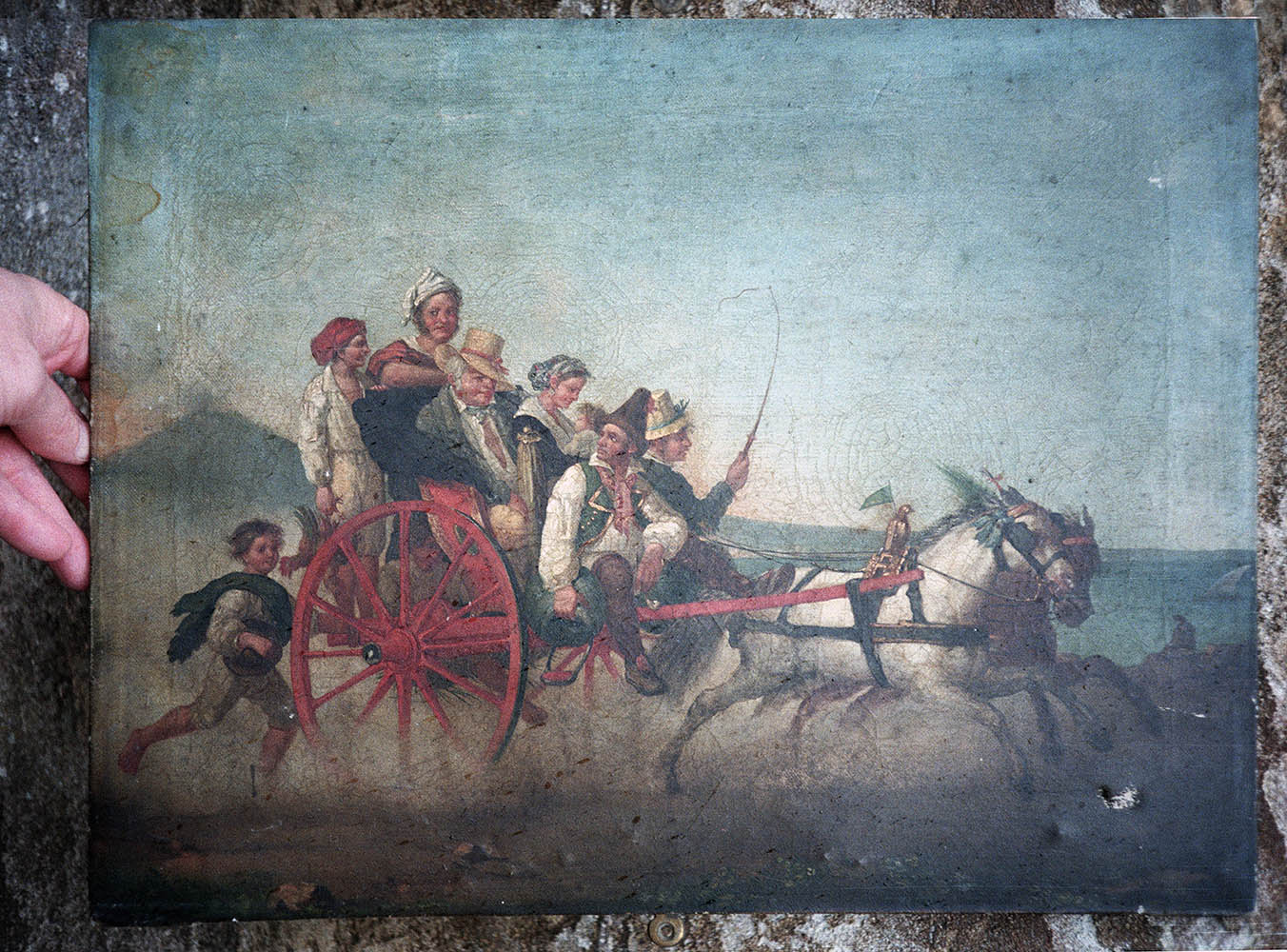 Perhaps not perfect even in Talbot’s day, at some point the painting was removed from its frame and disappeared into the deep recesses of Lacock Abbey.  The late Anthony Burnett-Brown, Talbot’s great-great grandson, had patiently listened to my requests for many years to trace it.  Finally, during a visit in 1998, with a wry smile he suddenly produced it, long forgotten in storage in one of the rooms in the North Courtyard, punctured in a couple of places but in remarkably good nick.  By coincidence, Anthony’s hand was preserved by his ancestor’s art, accidentally captured in the snapshot that I took in the courtyard that October day.  For me, it is a visual touchstone to a great person and a sustaining supporter in the formative years of the Catalogue Raisonné.  Today the original painting has been sensitively restored and is now preserved in the Bodleian’s Fox Talbot Archive.

• Questions or Comments? Please contact Prof Schaaf directly at larry.schaaf@bodleian.ox.ac.uk  •This print is in the Fox Talbot Collection, The British Library, London. Its negative is in the National Media Museum, Bradford, 1937-3200, and a number of prints survive in various collections; Schaaf 377.  •The image showing the original frame is a negative in the National Media Museum, Bradford, 1937-3202; no prints from it are known, Schaaf 631.   •The original oil is in the Bodleian, FT11322.