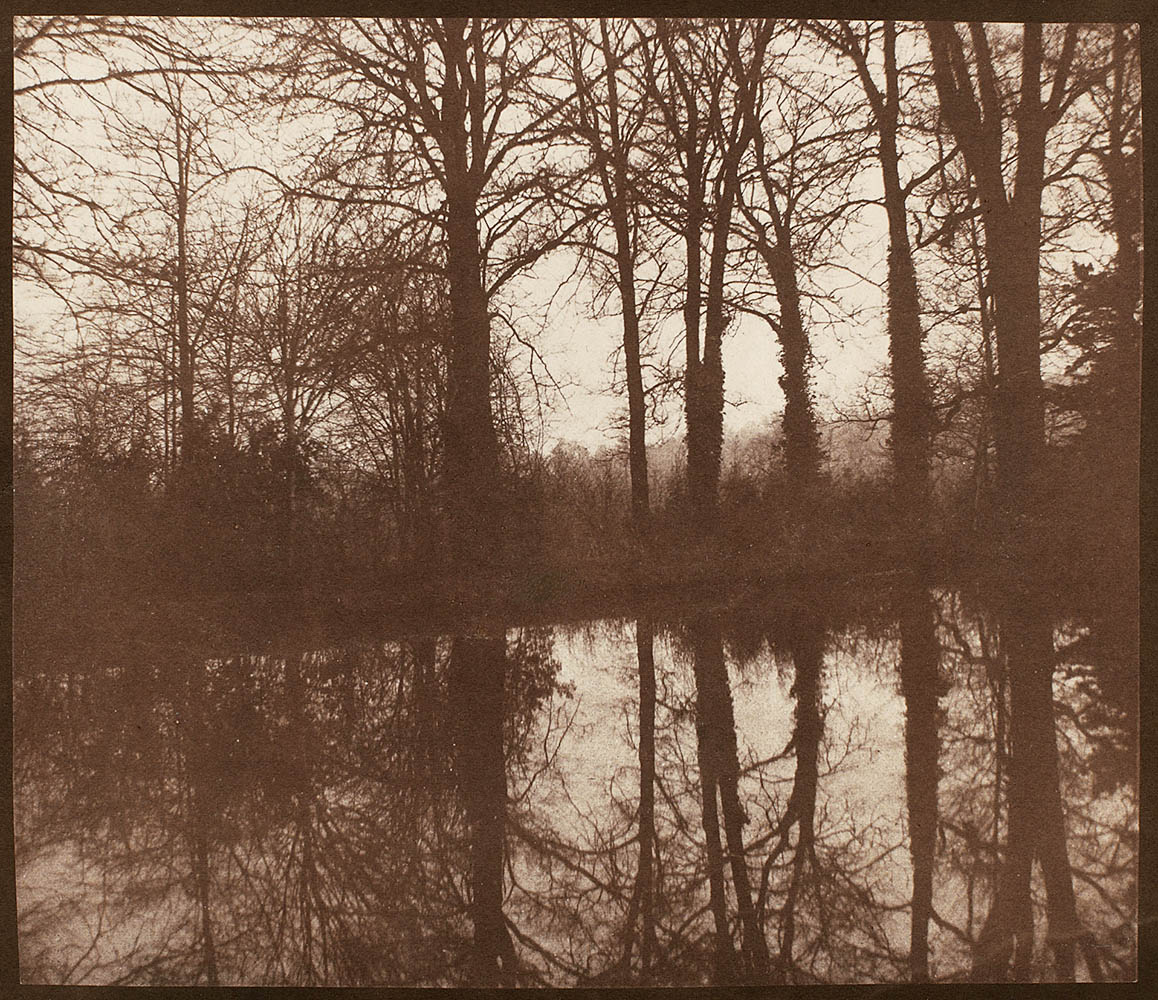 With our current hot and muggy weather, this refreshingly calm wintry view encourages the imagination to wander. It is such a timeless photograph – converted to more conventional black and white tones it might well have been taken by a pictorial photographer in the 1890s, or a proud member of a camera club in the 1930s, or even by a digital photographer last week.  One could easily be forgiven for being reminded of Edouard Steichen’s Moonrise.  Talbot’s photograph defies all boundaries, temporal or spatial.  Last week I had the pleasure of visiting Malcolm Daniel in his new home at the Museum of Fine Arts Houston. He had arranged for an informal lunchtime conversation with me for staff and supporters.  Del Zogg was happily still there, a week before his retirement, and he quickly organized a  study room display of an impressive number of their holdings.  Of the several splendid Talbots that had been collected by Manfred Heiting, this one certainly held its own.

It had always seemed likely to me that Talbot stayed close to his home of Lacock Abbey to find this subject. I recall with great fondness a misty winter day when the late Anthony Burnett-Brown handed me a spare pair of wellies and we went tromping around the grounds. During May 1840, Talbot had made up a list of things “to be copied,” including “trees in pond.” At first we thought it might have been referring to the nun’s old stew pond, the source of fish for their Friday evening meal. But the background matched the contours of the Bowden Hills and we finally concluded that it was taken near the site of the old decorative canali northeast of the Abbey.  Less than a decade before this photograph was made, Henry Talbot wrote to his Uncle William, saying that “you will be glad to hear the Canal Company have quitted the gravel pit…and I have begun planting it with pretty large young trees, already they make a good effect.” These trees are regularly spaced, as if planted, and they certainly make a “good effect.” Talbot must have placed his camera right on the ground in order to get this point of view, one that confounds concepts of size and space.

Talbot would originally have seen this image upside down in his camera (and you can readily duplicate this on your screen) – if anything, the composition is even stronger that way. After his advances in the spring of 1840, Talbot might possibly have been able to take this negative with photogenic drawing paper, but with the weak light of winter, the exposure time would have been so long as to encourage mischief from the wind.  It is more likely that he took it in the winter of 1840 or 1841, after he had discovered the much more rapid calotype process,  a developed-out rather than printed-out one.  In March 1841, his friend Sir John Herschel marveled at Talbot’s freshly-announced calotype negative paper, saying that he wished he “had a sheet of it here at this moment where I am sitting in a warm summer house on the edge of what we call our lake with the brightest sunshine sparking on the water and the reflexions of the oak trees in all the Bays and creeks touch out most delicately in the most heavenly sky and temperature it is possible to concieve. Never was surely such a succession of blue Skies and Photographic weather since Britain was an Island as we have had since this time 12 months, and finely indeed you have availed yourself of it.” Talbot modestly replied that “lakes and old oak trees are very much to my taste….”