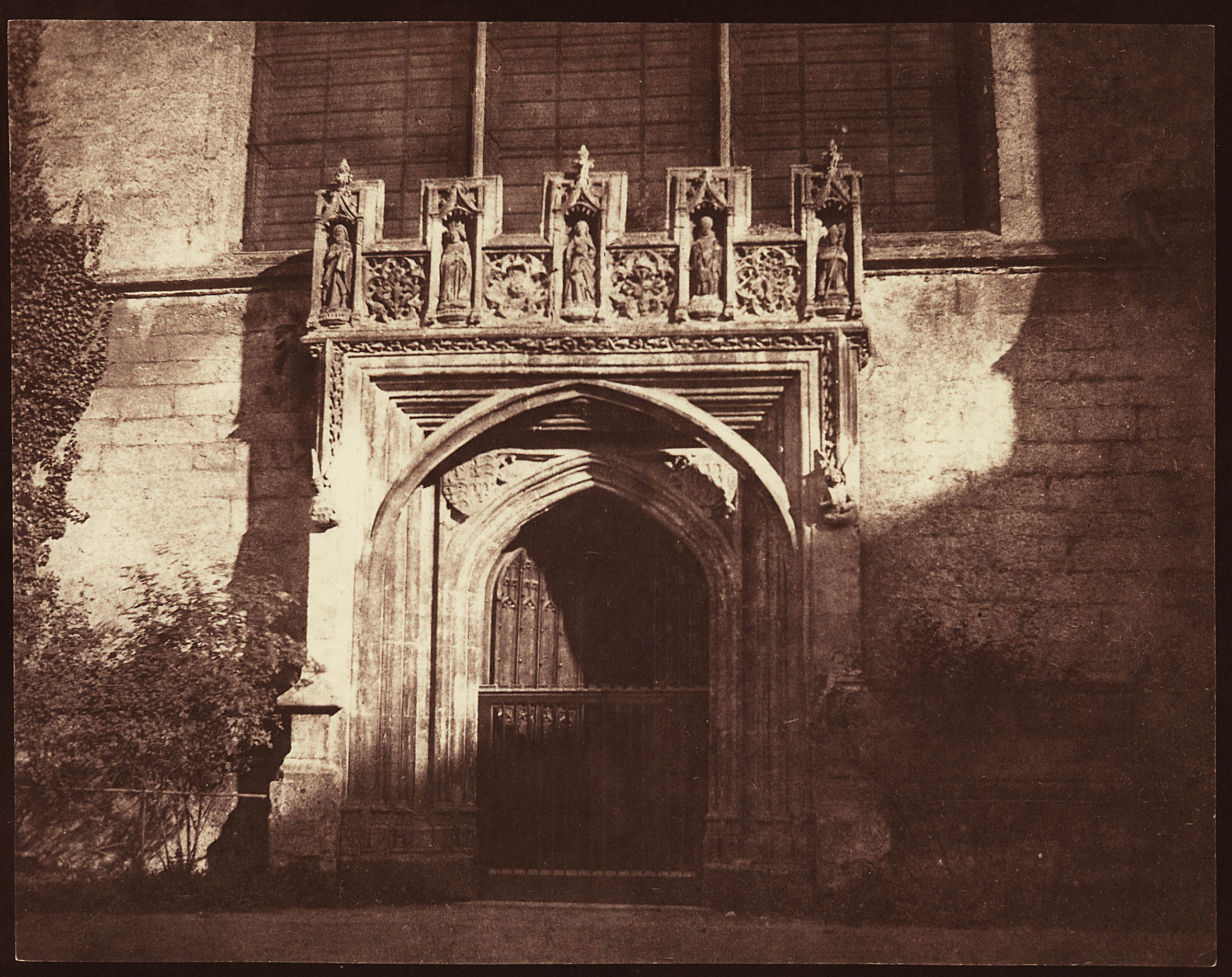 The Summer Bank Holiday passed earlier this week in the UK and on Monday the Labor Day holiday will mark the unofficial end of summer in the US.  The Rock House garden is now at its peak and producing an almost embarrassing bounty, but it won’t be long before we will be lamenting the paucity of good tomatoes and fresh basil.  Even though the Michaelmas term for Oxford is still more than a month away, the signs are clear that the return to schedule is nigh. Each week this summer we have picked out one of Henry Talbot’s photographs to celebrate, and to mark the end of this series, what could be more appropriate than a return to Oxford?

Aside from its inherent beauty, what really intrigues me about this photograph is that Talbot opened up about his reaction to the scene in a way that he rarely revealed. Beyond its significance as an architectural recording, he paid acute attention to light and shadow, remembering that “when we visited this interesting spot ye summer sun was getting low, & ye shadows of ye neighboring buildings were fast incroaching upon it the object we wished to delineate. Perhaps the resulting effect is none the worse on that account. Painters love objects visited in partial gloom.” By this point, Talbot’s artistic evolution was strongly underway. The “we” was not the Royal Plural, but rather a recognition that Nicolaas Henneman had been an invaluable helper, if not co-author, of the series of images of Oxford of which this is a part. Upon seeing this photograph, Calvert Jones wrote enthusiastically that he thought “the entrance to the chapel the finest that has yet been done.”

In person, this doorway is a bit less monumental in size than Talbot’s photograph implies, and indeed today it frequently serves as a cozy frame for wedding couples. Dating to the 15th c., it is set in a projection below the West windows of Magdalen’s Chapel.  The four statues are either more modern additions or are replacements for the originals and include, appropriately, representations of St. Mary Magdalen and the founder of Magdalen College, William of Waynflete. The doorway and its statues were restored in 1996 but look much the same as Talbot’s nearly two century old view.

Talbot had intended this picture as a plate for his Pencil of Nature, but sadly before the ‘Ancient Door’ could be published this publication collapsed after six of the projected twelve fascicles.  In the text for an earlier Oxford plate, Talbot observed that “those who have visited Oxford and Cambridge in vacation time in the summer must have been struck with the silence and tranquility which pervade these venerable abodes of learning. Those ancient courts and quadrangles and cloisters look so beautiful so tranquil and so solemn at the close of a summer’s evening, that the spectator almost thinks he gazes upon a city of former ages, deserted, but not in ruins: abandoned by man, but spared by Time. No other cities in Great Britain awake feelings at all similar. In other towns you hear at all times the busy hum of passing crowds, intent on traffic or on pleasure – but Oxford in the summer season seems the dwelling of the Genius of Repose.”

How strange that feeling of tranquility must sound to the visitor crowded into the summer hordes of today!

This marks the end of Summer Pleasures for this year. Barring any breaking news, this blog will now switch over to a weekly to fortnightly publication. Your suggestions for future topics are welcome. I hope to begin including some guest authors in the not too distant future.

• Questions or Comments? Please contact Prof Schaaf directly at larry.schaaf@bodleian.ox.ac.uk  • WHFT, An Ancient Door, Magdalen College, Oxford. Salt print from a calotype negative, 9 April 1843. Courtesy of The Richard Menschel Collection, Schaaf 44.  • WHFT’s observations are recorded in his manuscript where he first wrote “when we visited this interesting building” but then crossed out building in favour of “interesting spot,” revealing his more nuanced reaction to the special nature of the place at that particular point in time; the Fox Talbot Collection, the British Museum, London.  • Calvert Jones to Henry Talbot, 6 October 1845. LA45-134, Fox Talbot Collection, the British Museum, London, Talbot Correspondence Document no 05404. • WHFT, text for Plate XVIII, the “Gate of Christchurch,” The Pencil of Nature (London: Longman, Brown, Green, & Longmans), No. 4, June 1845.