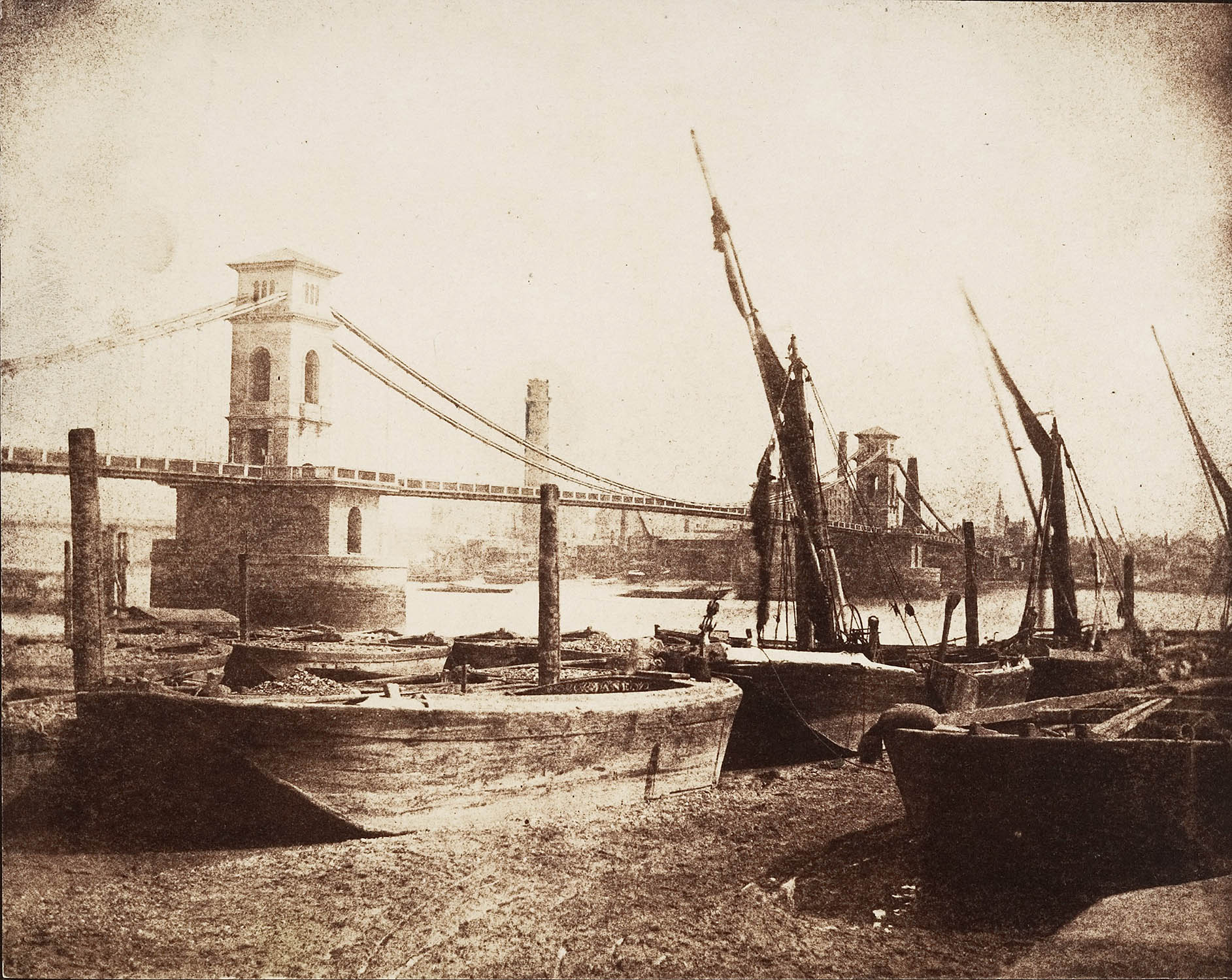 In a daring composition, Talbot commands our attention to the bustle and speed of the rapidly growing metropolis of London.  His central subject is the Hungerford pedestrian bridge, started in 1841 and opened on 1 May 1845. The boats that it was meant to replace compete for our attention, seemingly racing onshore to get ahead of the traffic of the bridge. In an image strangely devoid of actual people, the presence of mankind is completely dominant. For various reasons, Talbot began to edge away from taking photographs himself during 1845 and his last known images were taken that autumn. Some of his final and most successful work was that which he did in emerging London. 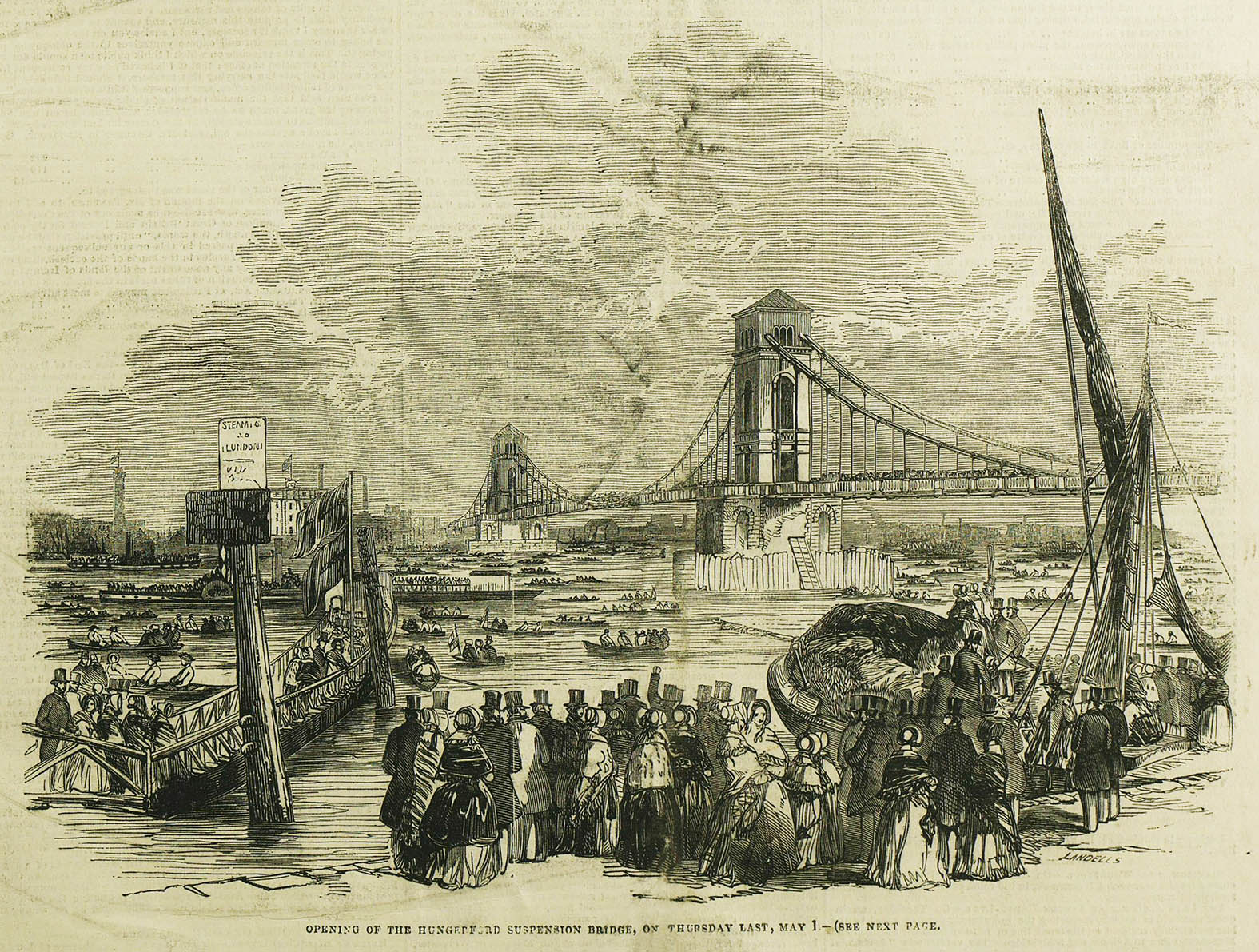 One of the visionary and bold  (and ultimately commercially unsuccessful) projects conceived of by the great engineer, Isambard Kingdom Brunel, the Hungerford toll bridge was meant to quickly and efficiently convey the large populations of labourers living in the crowded quarters of the South Bank to the economic powerhouse of the North Bank. It was built solely for pedestrians. In the background of Talbot’s view, projecting into the sky is the 1826 Shot Tower, built just around the time that Talbot was moving back into Lacock Abbey – it was demolished in the 1960s. Hidden behind the central mast is the brewery site that would be cleared to make way for the optimistic 1951 Festival of Britain. But the Hungerford Bridge itself was to have a much shorter life. Ironically, the railways that so interested Brunel were the downfall of his pedestrian bridge. In 1860, after a working life of just fifteen years, it was taken down to make way for the unlovely Charing Cross railway bridge.  Parts of the original towers were used, but the most interesting recycling was that of the long chains from which it was suspended.  They supported a total length of 1353 feet (412 meters) with a central span of 677 feet (207 meters). Each of the 2600 links of chain was an inch thick, seven inches wide and twenty-four feet long (2.5 x 18 cm x 7.3 m long) and each weighed 615 pounds (280 kg).  An astonishing amount of precision wrought iron – they were too good to waste.

After a short time in storage, the chains were recycled as a memorial to Brunel, who had died in 1859, becoming the support for the breath-taking suspension bridge across the gorge at Clifton, outside Bristol.  During the decades of debated planning for the Clifton Bridge, William West (yes, of ‘The Damned Leaf’ fame) had vigourously advocated for the Continental method of using metal cable for suspension bridges.  However, the sudden availability of Brunel’s Hungerford chains settled the argument once and for all. 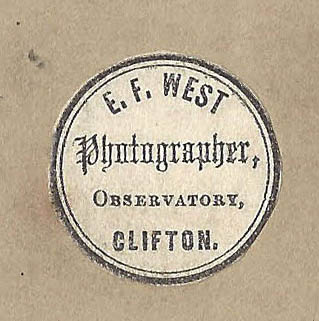 William West had been living in London for some time before his death in November 1860. His son, Edwin Francis West (1822-1880), had long since taken over management of the Clifton Observatory and Camera Obscura.  Edwin described himself as a ‘Portrait Painter’ in the 1851 Census, as ‘Photographer’ in the 1861 Census and as an ‘Artist Photographer’ in 1871 Census.  Overlooking the site, he was in a perfect position to document the progress of the Clifton Bridge, and, of course, to benefit from sales of stereo cards of the amazing sight.

• Questions or Comments? Please contact Prof Schaaf directly at larry.schaaf@bodleian.ox.ac.uk  • WHFT, The Hungerford Suspension Bridge, London, salt print from a calotype negative, summer 1845? Gilman Collection, The Metropolitan Museum of Art, 2005.100.608; Schaaf 1219.  This print was formerly in the collection of Harold White.  • The woodcut of the opening is from the Illustrated London News for 3 May 1845  • The view of the Clifton Bridge and the E. F. West label are part of a group of related images in a private collection, used with permission and thanks.   • Adrian Andrews, an authority on Isambard Kingdom Brunel and the Clifton Suspension Bridge, contributed valuable information on the Clifton/West connection.