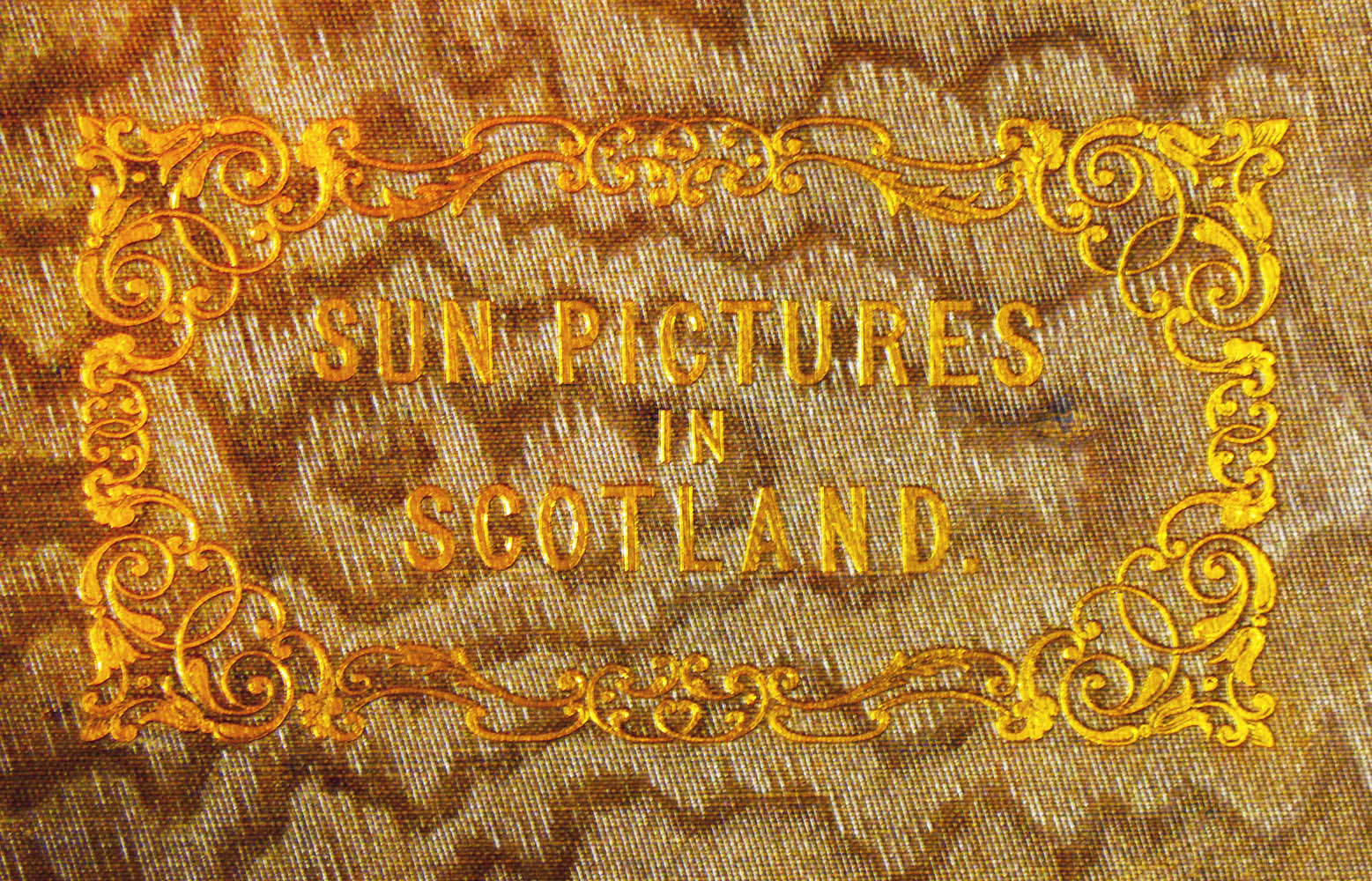 Earlier this week (in 1844), Henry Talbot departed from York where he had been participating in the annual meeting of the British Association for the Advancement of Science.  Accompanied by Nicolaas Henneman, once his valet but now the proud owner of his own Talbotype establishment in Reading, the two men must have been in high spirits.  The Pencil of Nature was enjoying good initial success and the second fascicle was already in production.  Queen Victoria’s interest in the exotic region north of Hadrian’s Wall had only intensified the public’s cravings for the enormously popular writings of Sir Walter Scott. Talbot’s journey was undertaken in order to create photographs for a new book, Sun Pictures in Scotland, intended to “represent scenes connected with the life and writings of Sir Walter Scott.”  In spite of the variable Scottish weather and the fragile state of Talbot’s health, this venture led to what I believe are some of the most sophisticated and modern photographs that Talbot ever created. 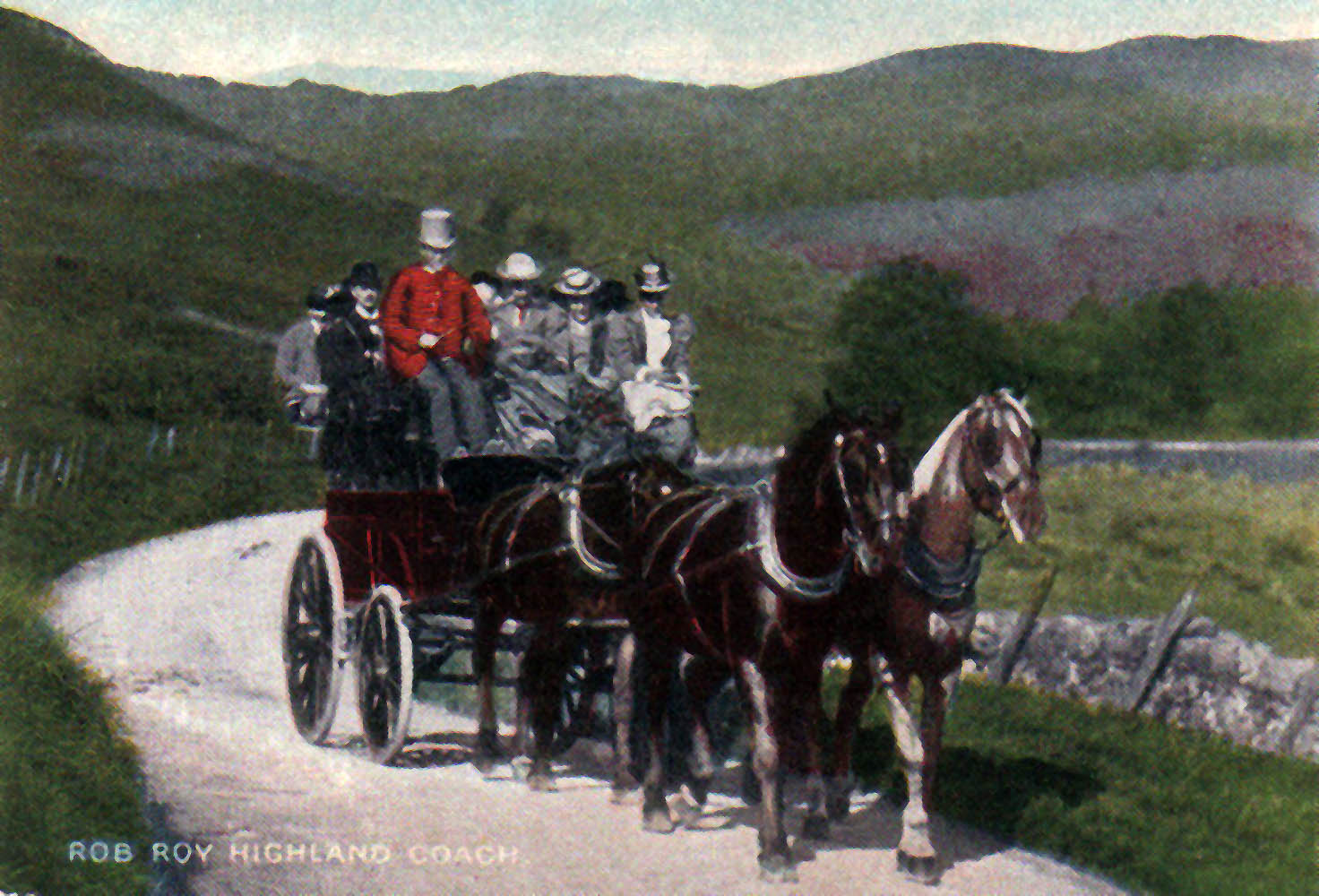 Talbot and Henneman ventured into a Scotland just beginning to open up to tourism, a region far more primitive than the later postcard above implies.  We can trace some of the perils of the journey through the account book kept by Henneman and by the letters Talbot received from his wife Constance, who remained at Lacock Abbey.  Even though travelling, he preserved her letters and took them home with him; curiously, his correspondence to her, which should have remained at Lacock Abbey, is at present undiscovered. 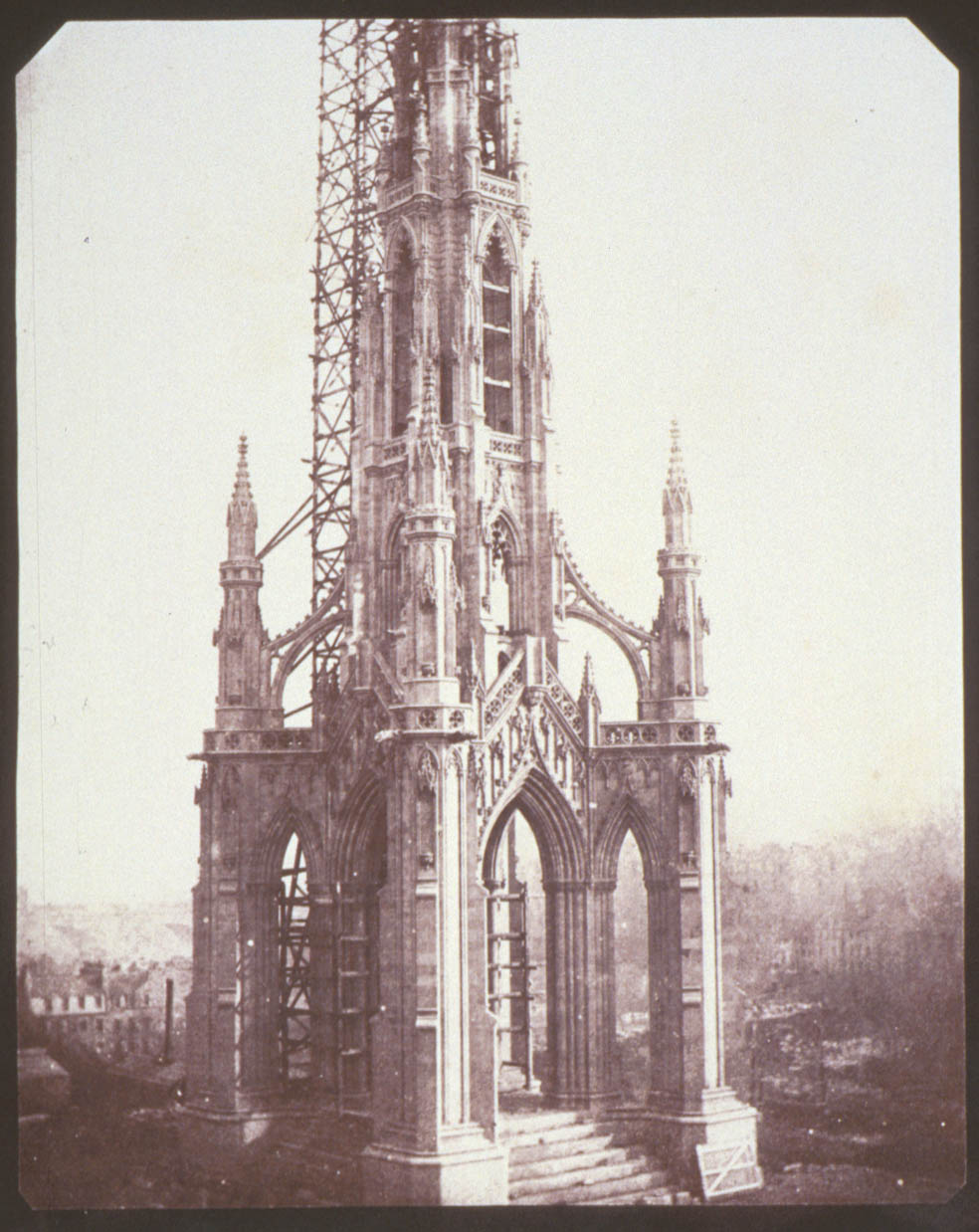 Talbot arrived in the ‘Athens of the North,’ Edinburgh, on 12 October. Taking a room in a hotel on Princes Street, he was able to shelter his camera from the Scottish wind and frequent showers. The somewhat overcast day actually worked to his advantage, softening the shadows and obscuring the other side of the vale in haze.  In spite of the recent tragic drowning of its architect, George Meikle Kemp, the monument was proceeding on schedule. Just days after Talbot’s visit, the last stone was put in place. His decapitation of the top is uniform through several negatives – apparently he had taken to heart the advice not to point the camera upward, but rather to keep things square. This view not only become the second plate in Sun Pictures in Scotland, but was also later sold by Henneman with a printed title. In some ways it is a very predictable photograph, but still a good one.  Talbot’s Scottish colleagues, Robert Adamson & David Octavius Hill, with Adamson’s studio nearby, calotyped the monument through various stages of its construction. 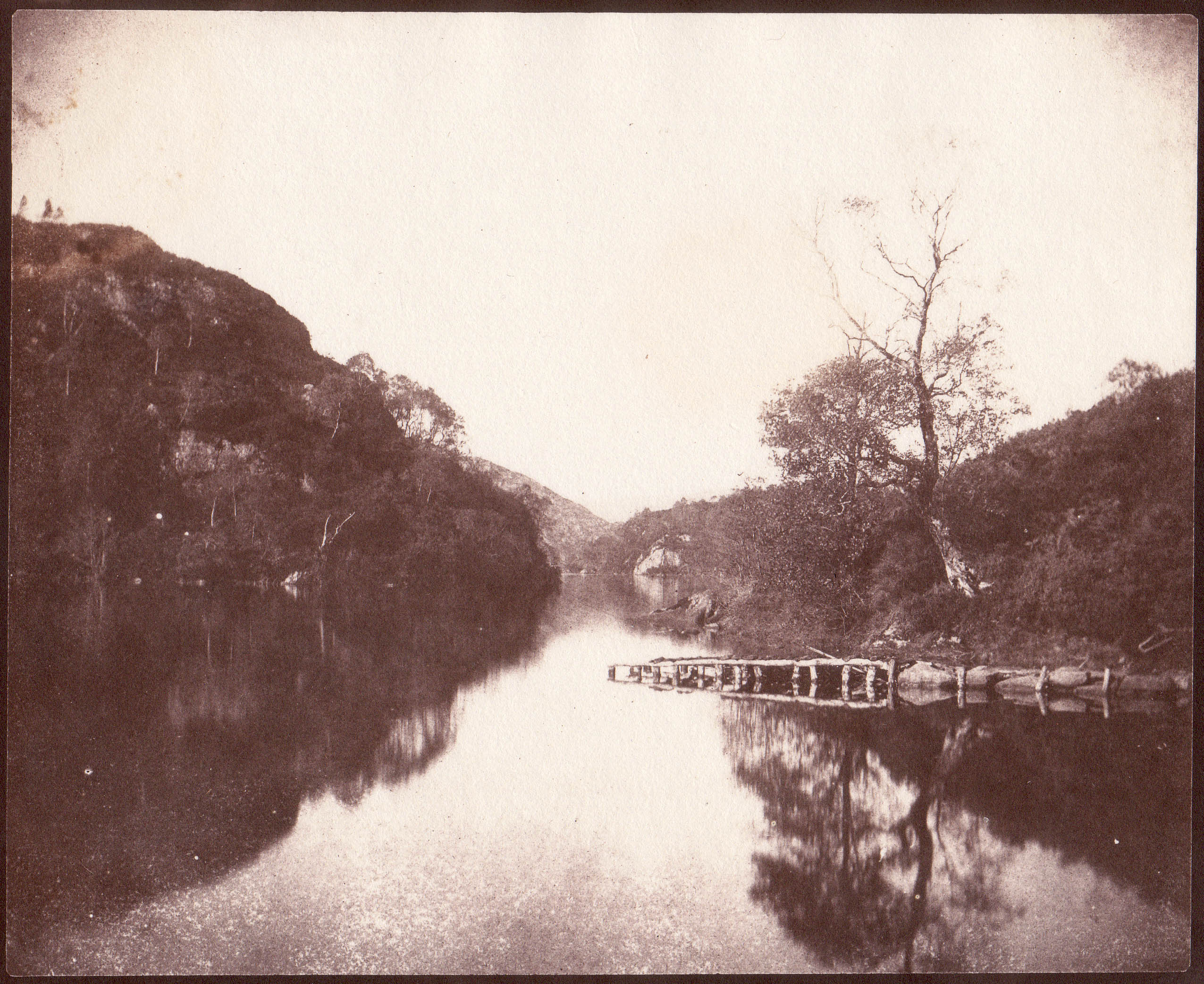 “Loch Katrine Pier, Scene of the Lady of the Lake”

Emerging from the wilds of the Trossachs Dell (Gaelic for ‘bristled territory’), Talbot suddenly came upon a scene of great beauty, so sudden it was if it was extracted by Talbot’s black magic from the very pages of Sir Walter Scott’s poem. Carefully balancing pairs of triangles of dark and light in an almost perfectly symmetrical composition, Talbot managed to invoke the beauty and mystery of the haunts of The Lady of the Lake. A slender tree reaches for the sky as a a rustic pier inserts itself into the silvery sheet of water.  There is a wonderful balance between the crisp rendition of a short exposure with the broadening effects of the calotype paper.  Constance recorded that the sun had become more kind to Talbot after he left Edinburgh: “I am charmed to hear that you had such fine weather for Loch Katrine – &c – and I am very glad that you did not turn back at Edinburgh as I fancied you would.”

Rendered in black and white, when would you assume that this photograph was taken? Most likely your answer would be closer to 1944 or even 2014 than 1844. It demonstrates that lacking the constraints and preconceptions of a trained artist, Talbot was both willing and pleased to accept what his new art had to offer. 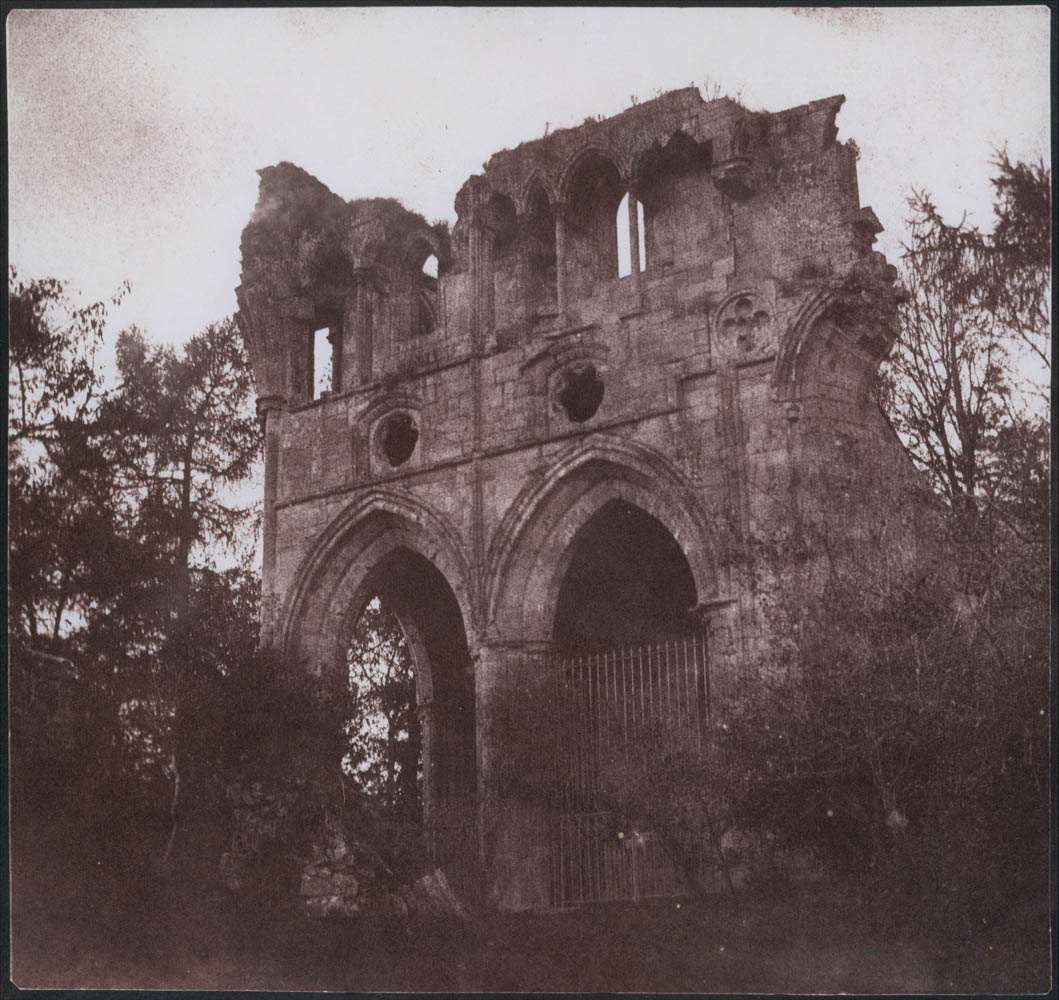 “The tomb of Sir Walter Scott, in Dryburgh Abbey, taken late in a autumnal evening”

Only twelve years before Talbot’s photograph, Sir Walter Scott was buried next to his wife at Dryburgh, only six miles from his fantasy home of Abbotsford.   At the time, George Smith wrote that “the ruins of Dryburgh abbey are so overgrown by foliage, that…every where you behold the usurpation of nature over art.”

In contrast with the plentiful 19th c. commercial views of Scott’s final resting place, Talbot’s photograph is somber and mysterious, charged with feeling and infused with spirits. Talbot’s photograph of the final resting place of Sir Walter Scott evokes an image that might well have come from the bard’s own words. The severe angle infuses life into the stones and the spindly trees add an air of tension. The Abbey struggles to remain above the earth. Talbot’s photograph poetically conveys the contemporary description that Talbot’s choice of lighting is especially appropriate, with his full title revealing that the exposure was ‘taken late in a autumnal evening.’ The air is still. The light is softened but clear. This powerful photograph was made possible by Talbot’s confidence in his own process.  When he first discovered the calotype almost exactly four years before this, he first noticed the dramatically reduced exposure times.  Then came explorations of new subject matter as well as exploitation of what had before been impossible lighting conditions.  The late evening glow of light was perfectly matched to his subject.

There are two known variant negatives, one of which is perfect but not as sharp. This one, which is waxed, exhibits coating defects and spots which show as black patches. Talbot made a wise decision that these had minimal visual impact. 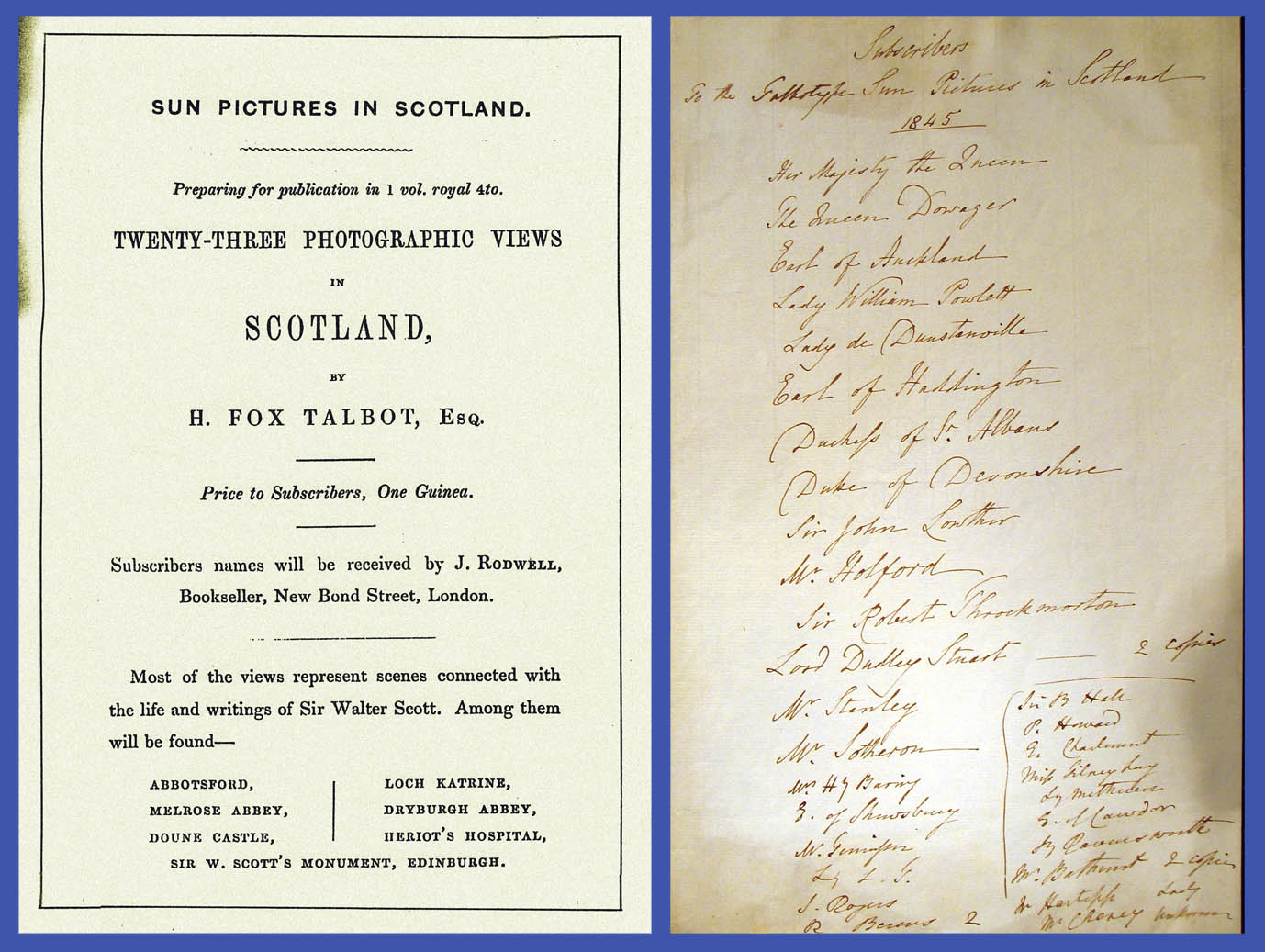 Unlike The Pencil of Nature, which was freely available through conventional booksellers, this new publication was to be sold strictly by subscription. Lady Elisabeth Feilding was the main impetus behind the project and her social connections and persuasive pen insured that all one-hundred copies were subscribed for. Indeed, the lists of subscribers could have been torn from her social diary. In one case, however, it is more likely that Talbot’s sister Caroline Mt. Edgcumbe played a role: heading the list of subscribers was Her Majesty the Queen.

Talbot and Henneman’s Scottish venture occupied nearly a fortnight, so we will continue this story in next week’s blog.