November frequently proved to be a significant month for Henry Talbot.  The month’s birthstone is topaz, a mineral imbued with virtues of wisdom, courage, serenity and healing, all traits that infuse his November photographs. 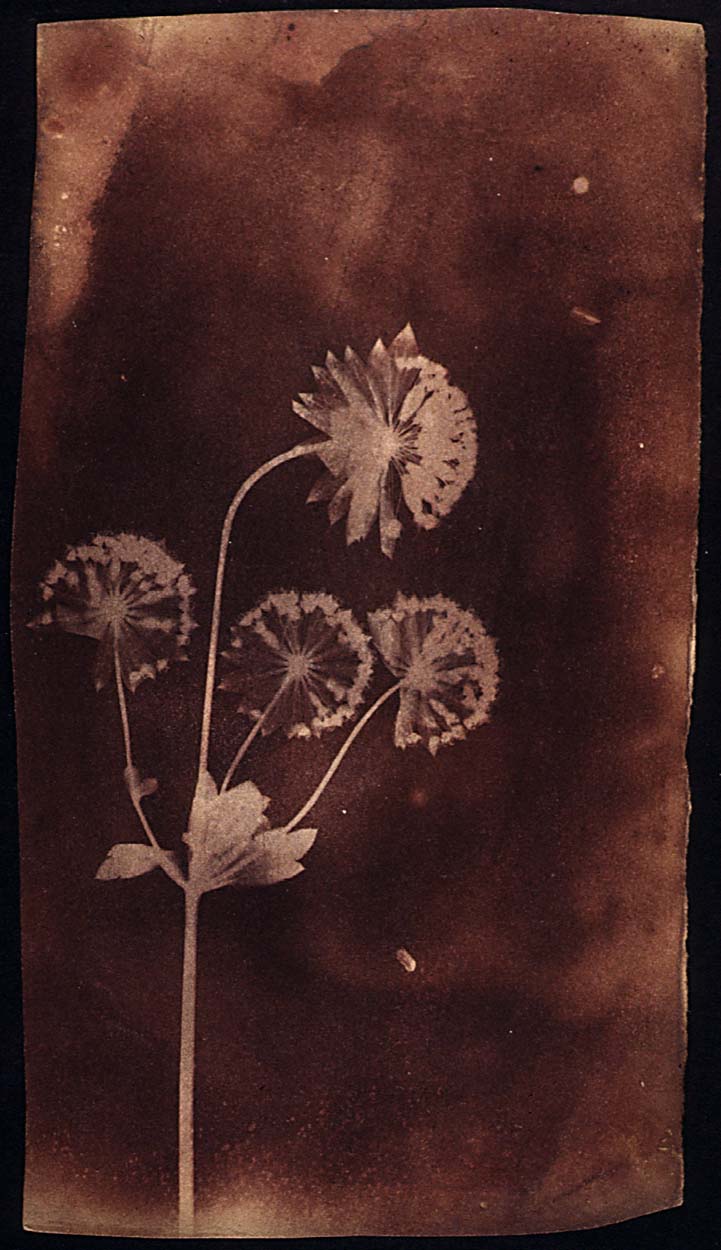 Since Guy Fawkes Day was little over a week ago, perhaps we can start with a photograph of fireworks. There soon would be good cause for celebration. Within days of making this picture, Henry Talbot attended a meeting of the Royal Society in London and was surprised to be asked to sit in the front row.  As he reported to Constance,  “the Council had awarded me the Medal for my Mathematical papers published in their Transactions….”  The prestigious gold medal was in recognition of years of Talbot’s groundbreaking work in mathematics.  As we know, Talbot conceived of the idea of photogenic drawing whilst in Italy in late 1833.  By the summer of 1835 he had gained virtually complete mastery of the process – and then put it in a drawer.  This was typical of him, changing interests as soon as he had climbed one intellectual mountain and starting to look for the next.  He was very busy with scientific and political matters in the second half of the 1830s, and it wasn’t until the autumn of 1838 that he return to his invention of photography.

Surprisingly,  this is one of only three Talbot negatives that can be positively dated prior to 1839 (although others are probable).  It is by far the best and the most beautiful, and also the most significant.  The common name for this plant, The Melancholy Gentleman, was uncannily appropriate, for within two months of him making this image, the private philosopher was shocked into public action by the announcement in Paris of the Daguerreotype.  And this gave Talbot every reason to be a ‘melancholy gentleman.’ He lamented that he could not “help thinking that a very singular chance (or mischance) has happened to myself, viz. that after having devoted much labour and attention to the perfecting of this invention, and having now brought it, as I think, to a point in which it deserves the notice of the scientific world, – that exactly at the moment when I was engaged in drawing up an account of it, to be presented to the Royal Society, the same invention should be announced in France.”

Had Talbot in fact commenced publishing his process shortly before he could have known of Daguerre’s impending announcement? This photograph is proof that he had returned to photographic studies and on 26 March 1839 Talbot wrote to the noted botanist, William Jackson Hooker: “I beg your acceptance of the enclosed Photograph, representing Camp. hederacea from bog on the summit of a mountain, Llantrissent Glamorgan. It was done with a November Sun” (which of course must have been November 1838).  By the way, I haven’t located that photograph, so perhaps Hooker took Talbot up on his suggestion to “try whether it is well fixed, by putting it in the sun.” 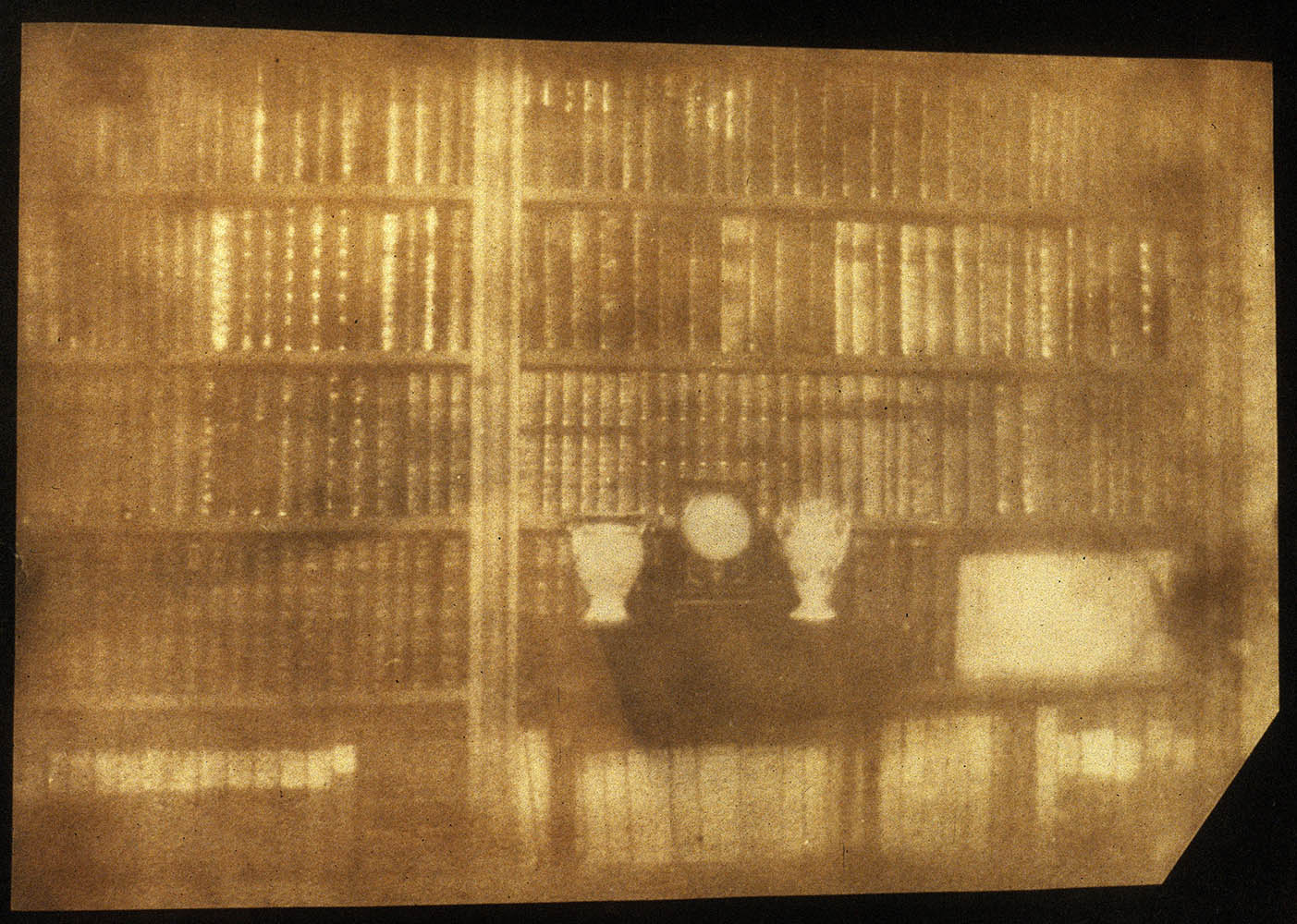 As the first public year of photography drew near to a close, Talbot had taken a battering.  The weather had been some of the worst on record, inhibiting his ability to make fresh photographic examples.  The Royal Society and other British institutions had completely failed him in supporting photography, in stark contrast to the adulations and treasures heaped on Daguerre by the French.  In this photograph, Talbot has documented the world in which he is more comfortable.  A mantle clock and Dresden china shimmer as emblems of the fine possessions of the landed gentry. But dominating the scene is the background, shelves of finely-bound books, the title blocks on the spines standing in as windows into other worlds.  This was Henry Talbot’s world!  The books were timeless and placeless and priceless to him.  He wrote to his friend and colleague Sir John Herschel a fortnight later, enclosing a companion photograph, “a little sketch of the interior of one of the rooms in this house, with a bust of Patroclus on a table.”  He too-modestly felt that “there is not light enough for interiors at this season of the year, however I intend to try a few more.  I find that a bookcase makes a very curious & characteristic picture:  the different bindings of the books come out, & produce considerable illusion even with imperfect execution.”

This photograph possesses far more ‘considerable illusion’ than ‘imperfect execution’.  It is all the more extraordinary when you consider that he made the negative with his photogenic drawing process – all of the effort of reducing the silver had to be provided by the energy of light.  Talbot was challenging the limits of his own technology here.  The Wiltshire sun would have been at a low point, with very little penetrating through the windows.  I don’t know what the exposure time was for this negative, but it certainly would have been half an hour and possibly considerably more.  That helps to explain the ethereal softness and luminosity of this image.  There might have been a little camera movement, although the thick walls of the Abbey would have protected his camera from gusts of wind, and the rumbling of tourist coaches was safely far into the future.  But as the earth turned, a considerable amount in fact during this exposure, the angle of the light kept changing.  The shadows moved in synchronisation, softening sharp outlines without totally obscuring fine detail.

Looking at this photograph, one can easily imagine Henry Talbot relaxing in his chair contemplating the year’s events, dreamingly surveying the satisfying world presented by his library, his gaze perhaps softened by the rarely taken glass of sherry.  It had not been such a bad year after all. 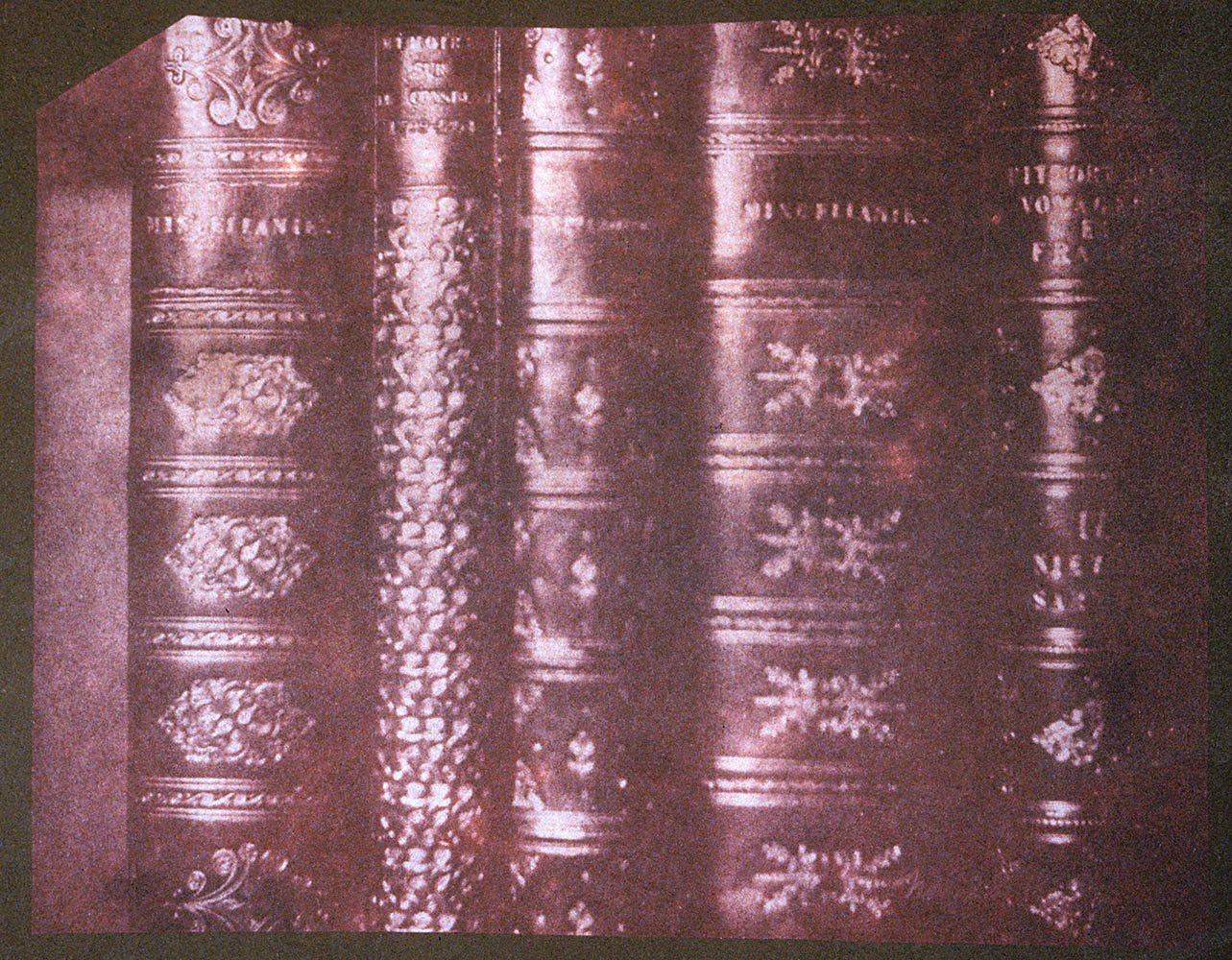 Just a month before he took this photograph, Talbot had discovered the latent image and the powers of chemical development.  His new negative process was to become known as the calotype (or, as his mother and loyal friends would prefer, the Talbotype). The most dramatic effect was the drop in exposure times from photogenic drawing – what had been minutes or decades of minutes suddenly became seconds. Four years after this, his “Scene in a Library,” published in The Pencil of Nature, would show whole shelves of books, sharply defined.  It is a fabulous photograph, familiar to many, but in some ways the present one is even more of an accomplishment.  Once again, Talbot was testing the limits of his own technology, challenging it to see what it could do.

These books are likely to octavo in format, roughly 23 cm. tall.  This negative is 10.4 cm. tall, meaning that this section of the bindings is reproduced just about life-sized.  In the present-day world of digital photography, macro (close-up) photography can seem to be pretty simple, just the matter of sliding a switch to the ubiquitous flower symbol.  Today’s photographers have been pretty well isolated from some of the nastier pitfalls raised by macro photography by the cleverness of the electronic engineers.  Focusing is automatic and dynamic, exposure compensation is automatic, and motion stabilization eliminates one of the biggest problems.  Talbot had to conquer all of these problems on his own.

In many ways, working with macro photography is much like working with a long telephoto lens. Camera movements are magnified.  The depth of field becomes extremely shallow.  The lens to negative distance becomes extended.  Talbot probably was still using a homemade camera at this point, perhaps one with sliding boxes, but in order to achieve this magnification he would have had to extend the lens a considerable distance from the sheet of sensitive negative paper.  At a 1:1 magnification like this (ie, life size), either the aperture has to be opened up two stops or the exposure time must be four times as long.  Very wide apertures lead to a very shallow depth off field, not quite as much a problem with a relatively planar subject like these spines, but imposing a high degree of criticality on the focus.  Was this taken out of doors (as was the later ‘Scene in a Library’) in order to take full advantage of the sun?  Or was it done near a window indoors, the camera protected from gusts of wind?  The highlights on the gilding could have been produced by either.  By any measure, this photograph is a great technical accomplishment, one that would have been impossible with photogenic drawing just a few weeks before.

Does the photograph have additional layers of meaning?  Examining the 1844 ‘Scene in a Library’, the reviewer for the Art-Union was “enraptured: it is two shelves of a bookcase, in which the volumes are represented in the most exquisite miniature that can possibly be conceived; yet, small as they are, we can read “Poetae Minores Graeci”—“Lanzi”—“Egyptian Mythology,” &c &c.”   The great photohistorian André Jammes pondered whether that image might not have been autobiographical and explored the possible meanings of the readable titles.  In the present closeup, we can make out two volumes of Miscellanea, a Pitturesque Voyages en France, and a Memoire sur la Commune 1789-1794.  Perhaps one of our readers can make a clever reading of that?