Yesterday, in 1800, William Henry Fox Talbot was born in his uncle’s home of Melbury, in Dorsetshire (as it was then known, Dorset to post-Edwardian types). 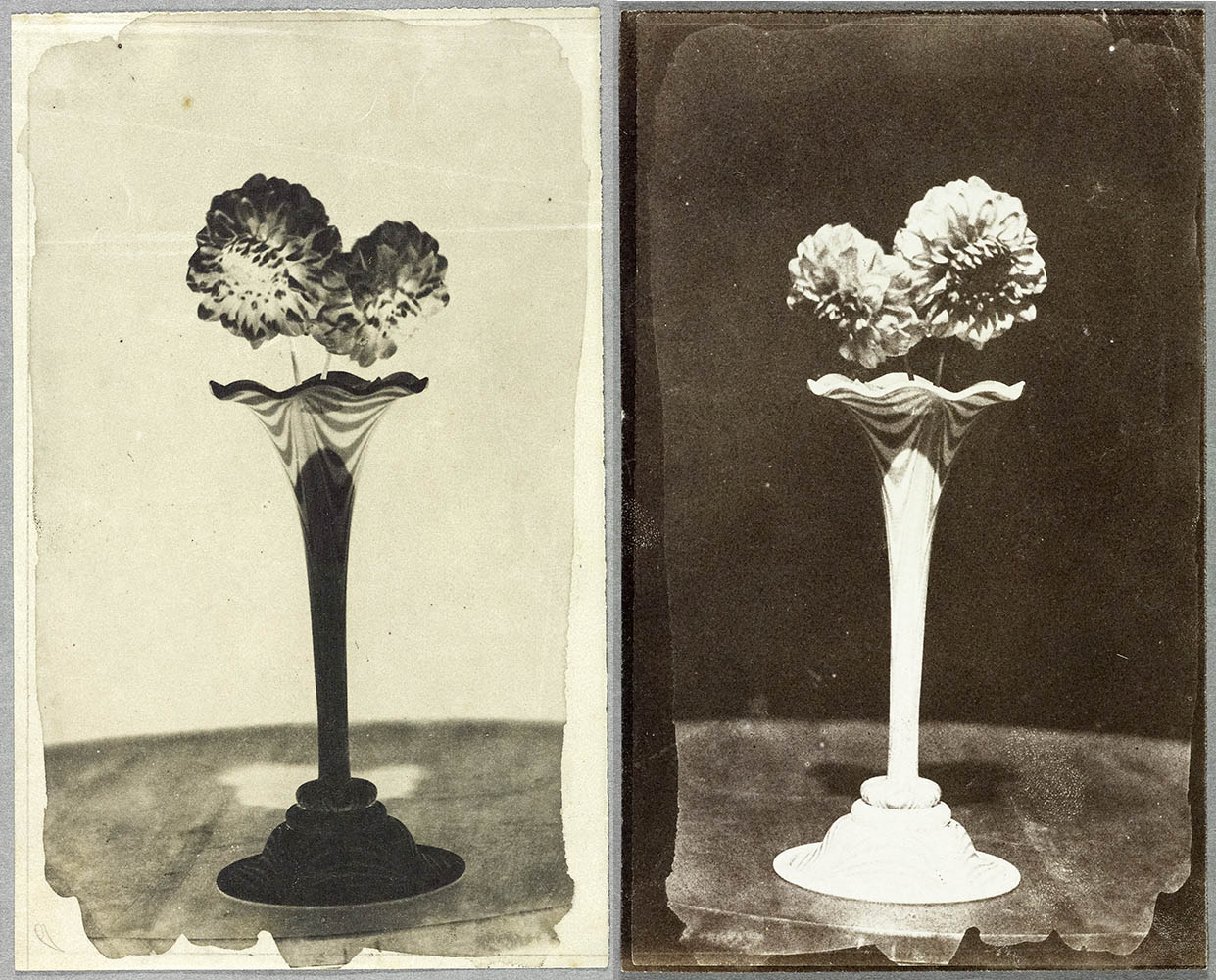 Happy Birthday Henry!   May we offer  you some of your own flowers in celebration, perhaps from Lacock Abbey’s garden, perhaps from its hothouse. But first, no tribute to Talbot would be complete without simultaneously celebrating the February 11th birth of Mark Osterman, the Process Historian at the newly-renamed George Eastman Museum in Rochester. 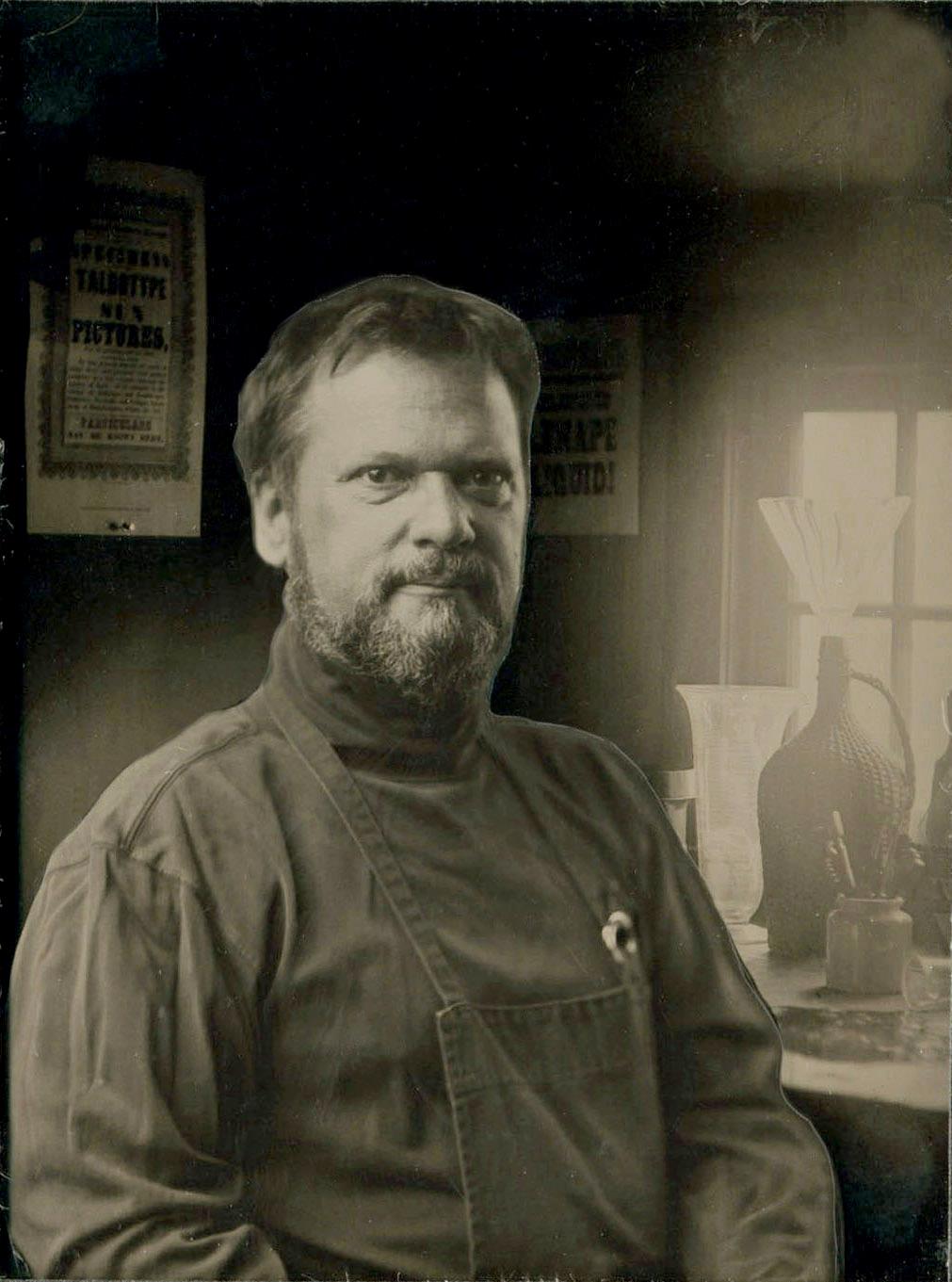 Who else would take up making his own 35mm photographic film on a salvaged machine once crowding the 1919 Ford Model T Speedster resident in his garage?   How I would have loved to have been able to sit these two down in the parlour, fasten my seatbelt and try to follow the lively interchange between two crazily inventive minds that would follow! 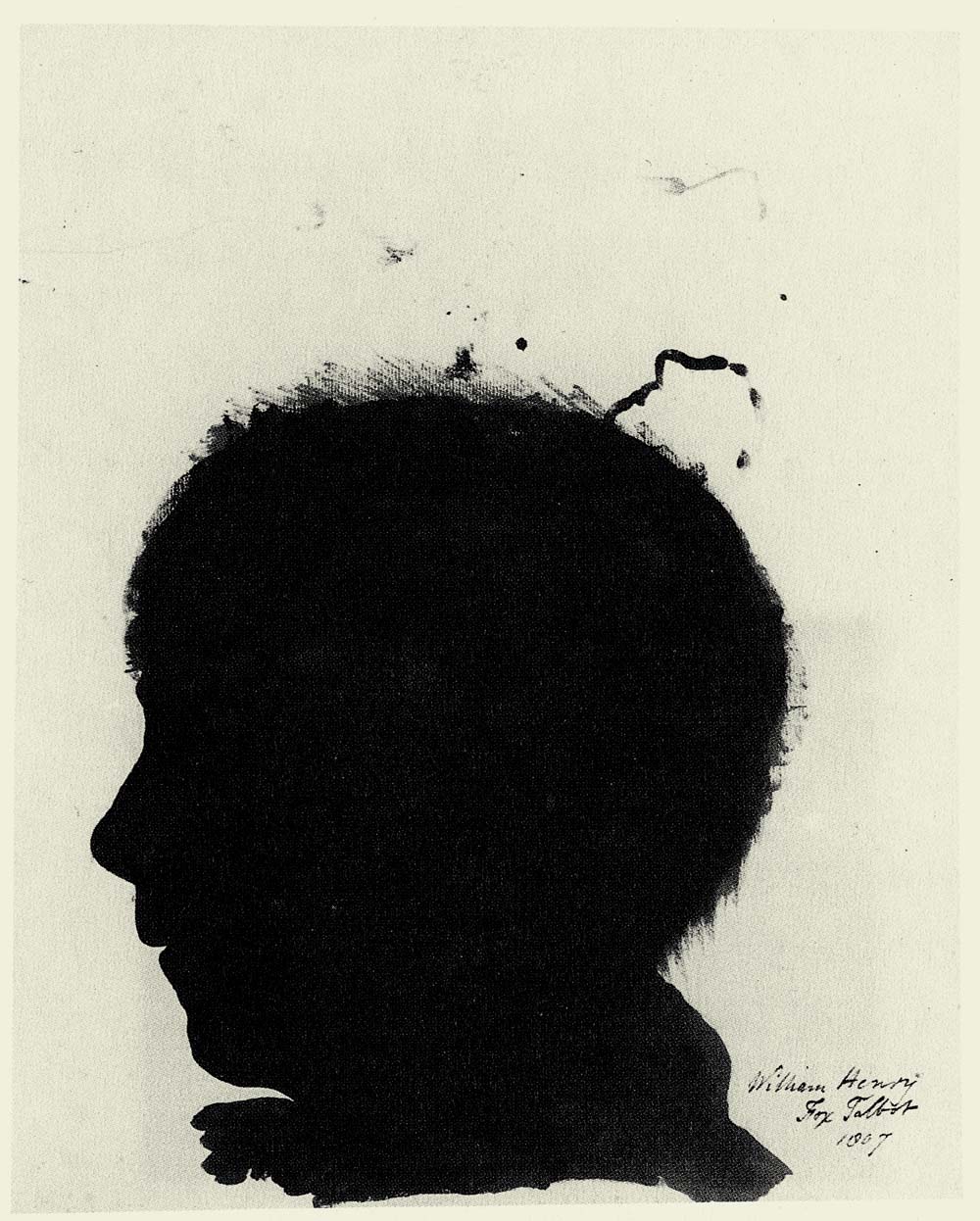 Even at the age of seven, Henry looks self-assured and brimming with ideas.  On the occasion of him obtaining his majority, his step-father, Admiral Charles Feilding wrote that “it was always my intention to have written you a few words of advice at this moment of your life; but really you do not want it, for all I could do would only be to desire you to go on as you have begun.“ Go on has he had begun.   His mother, Lady Elisabeth, confessed that “you cannot judge of the rapture with which I first beheld you.”  Of course, she went on in her characteristically assertive way: “For myself I shall preserve the right which Nature gives me, of suggesting any thing which from your youth & inexperience may not occur to you.”  And that she did, sharing an intellectual life with her son right up to her death in 1846.  Talbot’s creative photography died at the same time, but not his curiosity nor inventiveness.

It seemed to me that we needed a bit of colour to properly celebrate this birthday.  This is one side of a highly enigmatic document.  Why was he testing these artists’ colours? 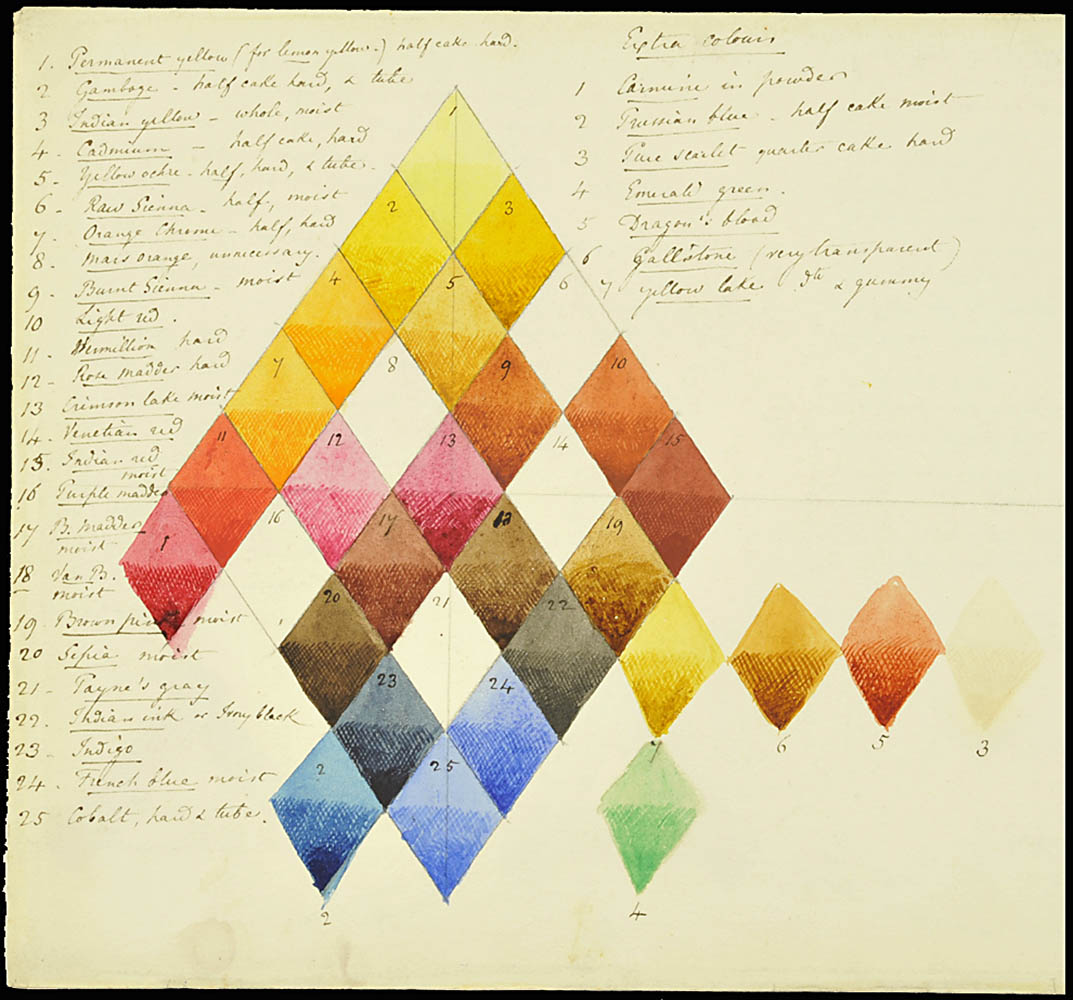 The only thing that we know at present about this document is from physical examination – the paper has a clear watermark of ‘Whatman’s Rough Imperial.’  Was it possibly a research tool in connection with his Revolving Photometer ? 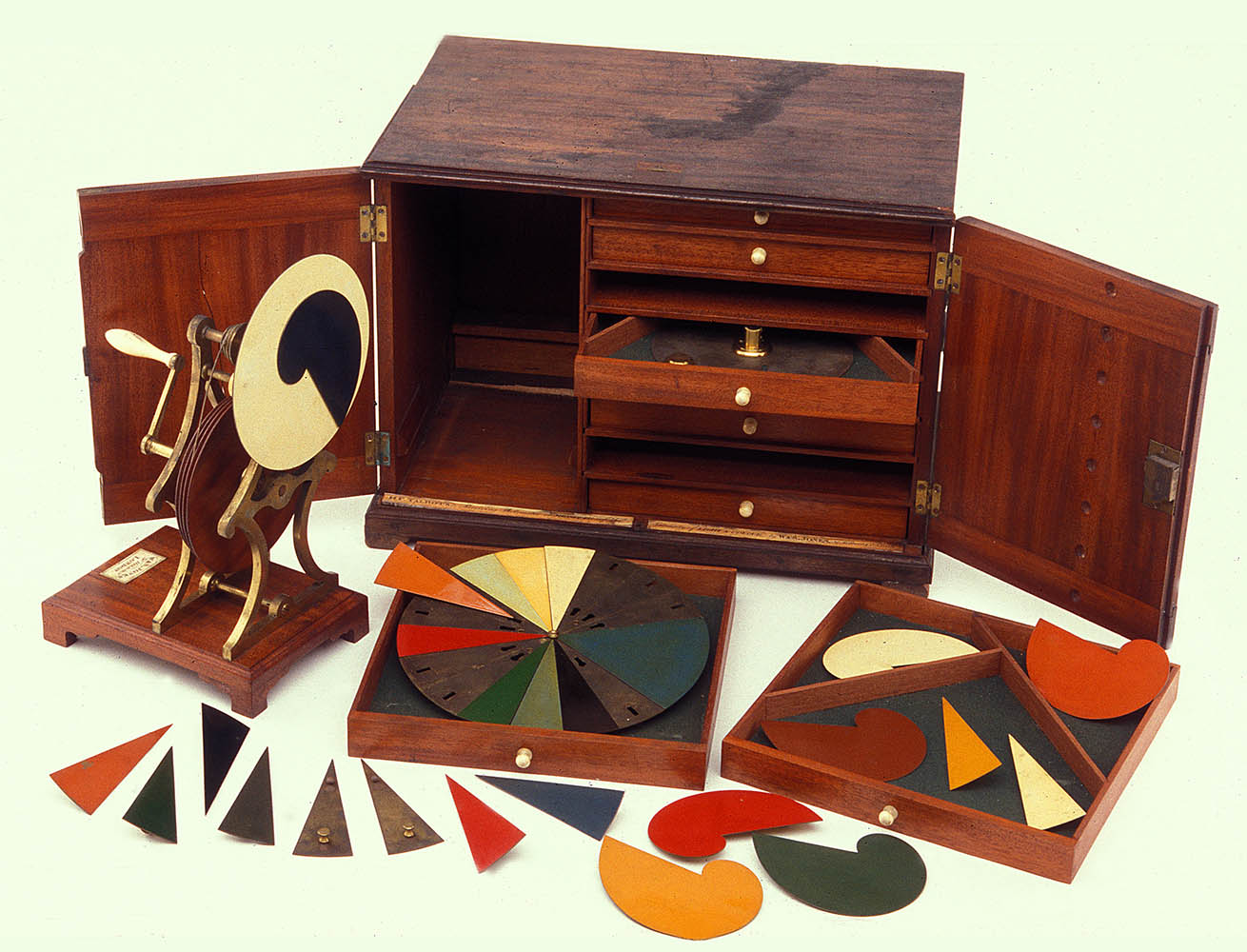 The full name of the instrument is H.F. Talbot’s Revolving Photometer or Measurer of the Intensity of Light and Colour.  For a long time it was known only through Talbot’s description in his 1834 series of “Experiments on Light,” a series of largely speculative papers presented to the Royal Society.  He wrote these up in July 1834, right at the very time when he was making his first successful photogenic drawings.  The written description was unexpectedly turned into a physical reality in 1995, when the sharp-eyed Alan Simpson, a curator at the Royal Scottish Museum (as I shall always call it) spotted it in the advertisement for a Philadelphia sale.  This particular example, perhaps unique,  had been made around 1835 for a Philadelphia insurance executive, Charles Nicoll Bancker and carefully preserved in a family collection ever since.  By rotating the various coloured segments, the experimenter could test various theories about the colour of light.  Talbot is often criticised for delaying revealing his 1834 invention of photography until after Daguerre made his surprise announcement in January 1839, but this was characteristic of the man. In 1833 he had written to Sir John Herschel that he had “contrived a Photometer upon principles I consider perfectly accurate. I wish therefore to ask you if you think that any Photometer has been described that is quite free from objection?”  As a form of prequel to the situation he would face in photography six years later, Talbot lamented that  “I don’t know why I have suffered these experiments to slumber in my portfolio for seven years; but I am now thinking of presenting them in the form of a short paper to the Royal Society.”  There is so much we have yet to divine of Talbot’s imagination, both in and out of photography.

Talbot shares a birthday with a number of unsavoury political characters, but also with another hugely inventive mind in the person of Thomas Alva Edison.   It was from his friend Walter S Mallory that we get the observation that “I then learned that he had thus made over nine thousand experiments in trying to devise this new type of storage battery, but had not produced a single thing that promised to solve the question … my sympathy got the better of my judgment, and I said: ‘Isn’t it a shame that with the tremendous amount of work you have done you haven’t been able to get any results?’  Edison turned on me like a flash, and with a smile replied: ‘Results!  Why, man, I have gotten lots of results!  I know several thousand things that won’t work!’ ”  I keep that in mind whenever I am thinking of Henry or Mark.  Happy birthday to both.

Questions or Comments? Please feel encouraged to contact Prof Schaaf directly at larry.schaaf@bodleian.ox.ac.uk  • WHFT or Nicolaas Henneman, Two Dahlias in a Striped Vase on a Round Tabletop, calotype negative and salt print from it, National Media Museum, Bradford, 1937-2219 and 1937-2221, Schaaf 2005.  • Mark Osterman, Self portrait, collodion relievo ambrotype, 2014. • Portrait of Henry Talbot, aged seven, ink on paper, probably done by one his Welsh cousins, possibly using an optical drawing device, Hans P Kraus, Jr.   • Charles Feilding to WHFT, 11 February 1821, Talbot Correspondence Document no. 00910.  • Elisabeth Feilding to WHFT, 11 February 1821, Doc. no. 00911.  •  WHFT, Experiment with watercolours, Fox Talbot Archive, the Bodleian Libraries, FT10206.  •  W. & S. Jones, H. F. Talbot’s Revolving Photometer, ca. 1835, National Museums of Scotland.  A review of this instrument and its modern rediscovery by Alan Simpson is “Talbot’s Photometer, or Developments Before Photography, Studies in Photography, 1996, pp. 5-7.  •  WHFT, “Experiments on Light,” London and Edinburgh Philosophical Magazine and Journal of Science, 3rd series, v. 3 no. 29, November 1834, pp. 321-334. • WHFT to John Herschel, 4 March 1833, Doc. no. 02625.  •  Quotations from Edison are widely echoed on the web and some of these may even have a kernel of authenticity.  My thanks to Rachel M. Weissenburger of the The Thomas A. Edison Papers at Rutgers University for providing a documented quote of this widely paraphrased statement.