Out of respect to busy schedules during this festive season,
we are returning to our tradition of pleasantly brief Holiday Treats 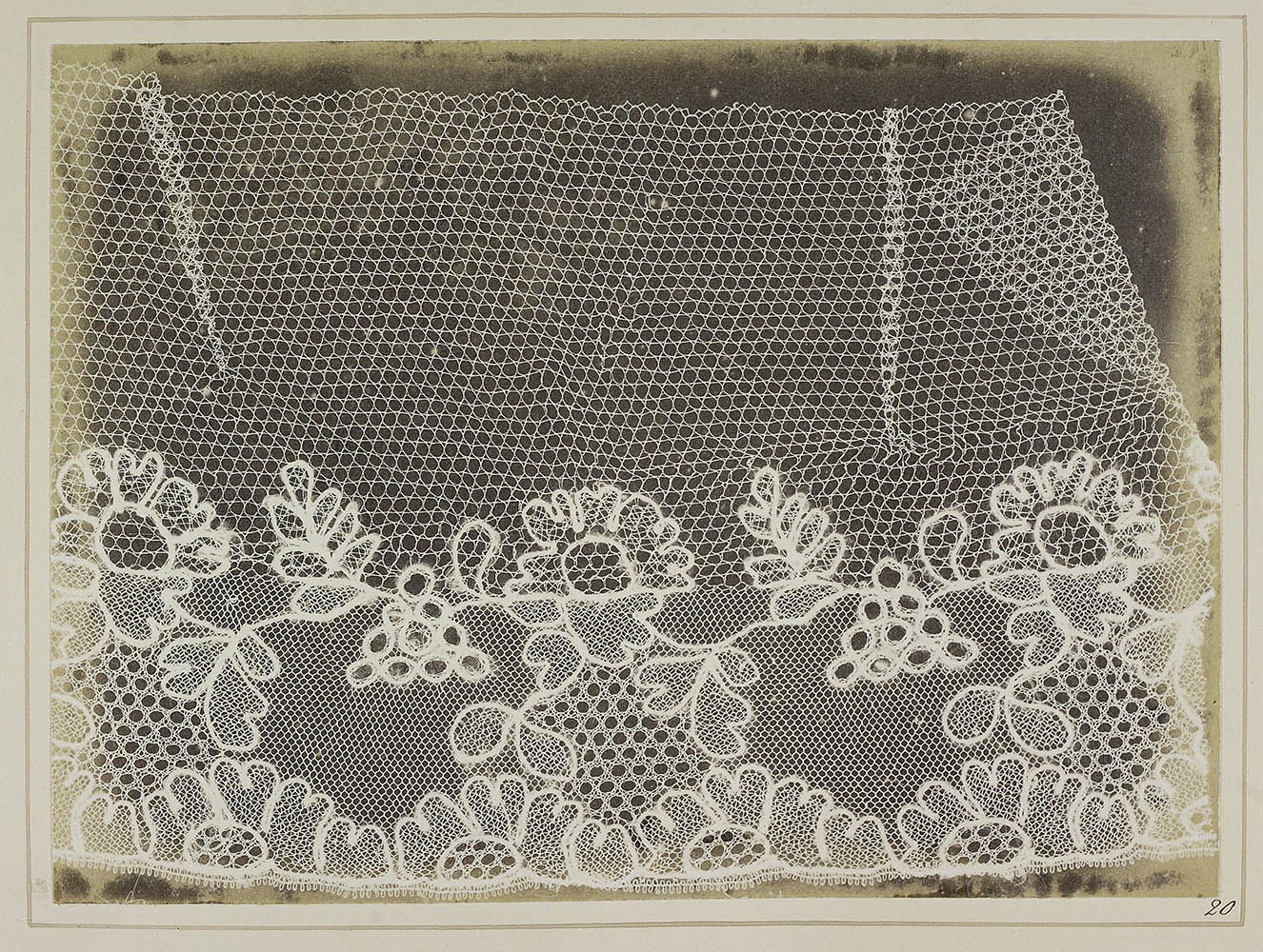 As a native of what was once called North Britain and currently resident in blistery Oxford, I like to wrap up warmly at this time of year. But what has this to do with Talbot’s photographic study of a piece of lace? My reply would be that 171 years ago this month, in December 1845, his photographic copy was published as plate XX in The Pencil of Nature. In the text accompanying the image Talbot explained his choice…

“In taking views of buildings, statues, portraits, &c. it is necessary to obtain a positive image, because the negative images of such objects are hardly intelligible, substituting light for shade, and vice versa.  But in copying such things as lace … a negative image is perfectly allowable, black lace being as familiar to the eye as white lace, and the object being only to exhibit the pattern with accuracy.”

I am sure that Talbot would have liked to have included an original negative in each copy of one of the fascicles of The Pencil of Nature but he faced two problems with this, the first being that he didn’t have enough spare negatives to give away. The lace, being easily repeatable, solved this problem and also addressed a second issue.  Not everybody understood just what negatives were, but representations of lace, which came in both white and black forms, was perfectly legible to all.

Plate XX therefore holds a singular place in The Pencil of Nature.  Every other plate  is one of many prints made from a single negative – that was the true advantage of Talbot’s approach over Daguerre’s.  However, every plate XX  is a unique negative generated from the same actual piece of lace (which I suppose should really be designated The Negative).

Logistical concerns may have been the chief reasons for choosing a piece of lace for his demonstration negative, but I wonder if there may have been some aesthetic thoughts that influenced his choice?  Did he choose to reveal this delicate image to his readers at a chilly time of year for similar reasons to why I chose it for this winter holiday treat?  The Russian Orenberg shawls created from incredibly fine goat’s hair are a commonly used barrier against bitter cold, but in general a lacey open structure would appear to be the antithesis of winter wear.  This is, after all, a summer motif with a decorative floral border.  And yet, on a subconscious level, the image could be viewed as a wintry one.  The dark background and white lace reminds me of the long nights and corresponding short days.  Talbot has presented the lace fragment so that there is a dense border of white along the bottom of the image which to my eye is reminiscent of a blanket of snow which almost covers the foliage in the design, just as a blanket of snow might cover the ground.

The Danish tradition of ‘Hygge’ (pronounced, ‘Hooga’) translates roughly as ‘cosiness’.  Scotland is on a similar latitude to Denmark, and liking winter myself I can appreciate the Danes’ method of coping with the time of year when the days are short, the nights are long and the temperatures are low. There’s also well-worn expression in the household I grew up in which was deployed whenever a garment was considered unfit for winter wear.  My mum might look at my jacket, chosen for looks rather than warmth and say, “You can’t go out in that – you can spit through it!”  The message was clear and unambiguous.  We didn’t have a Scottish equivalent for the Danish concept of Hygge, and cosiness is not really celebrated as a national trait in Scotland, but there was another Scots expression that fits the bill.  As youths we always left the house ‘happed-up against the cold (traditional woolen shawls from Shetland, known as ‘Haps’,  are thick and warm but have a lace-like structure).

Just one more thing. I can’t say that in choosing Lace for The Pencil of Nature that Talbot sought to remind his readers of snow and long winter nights.  But I am confident that it was not his intention to make a connection between photography, winter and traditional Scottish knitwear.