Last week’s blog looked at the international dissemination of photographs by Talbot and his circle, so it is fitting that this week’s guest blog comes to us from one of those distant locations: St. Petersburg, Russia.

We are pleased to introduce you to Dr. Maria Medvedeva, Head of the Scientific Archives of the Institute for the History of Material Culture at the Russian Academy of Sciences. Maria gives us an intriguing glimpse into two photographs by Talbot which have made their way to Russia and how they may have got there. In this final ‘Summer Pleasures’ instalment she takes us back to sometime before the summer of 1844 in Oxford, when Talbot took those photographs. 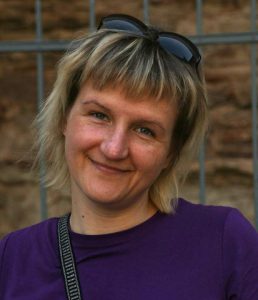 It is rare to meet photographs by William Henry Fox Talbot in a Russian archive, however one place is the Archive of the Institute for the History of Material Culture at the Russian Academy of Sciences in St. Petersburg, where two ‘talbotypes’ are found in its collections. They show Oxford scenes, one is of Christ Church Cathedral while the other is of the gate of Christ Church College. According to Professor Larry Schaaf the photographs were taken no later than the summer of 1844. 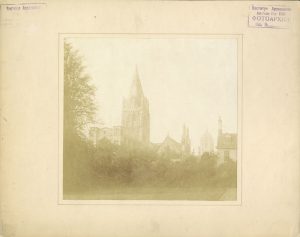 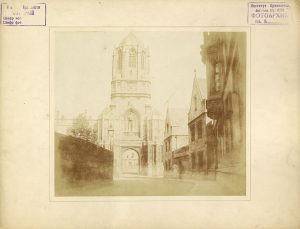 The style of the mounts, with their ruled lines, along with the inscribed titles in a hand other than Talbot’s (verso) suggest that these photographs were most probably acquired from Nicolaas Henneman, but how did they come to be in St. Petersburg? Here we must say a few words about the history of the Archive of the Institute for the History of Material Culture at the Russian Academy of Sciences, which dates back to the middle of the 19th century, and is connected to the activities of the Imperial Archaeological Commission (IAC), the leading archaeological institution in pre-revolutionary Russia. The earliest photographs in the IAC archive date from the early 1860s, however the lead characters in our story came from an entirely different collection. 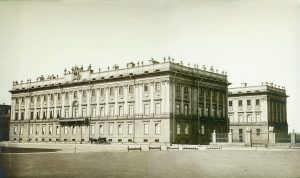 Unlike many other imperial institutions, the Archaeological Commission was reformed rather than destroyed after the revolution. The archives and library of the Commission were preserved and also significantly enlarged in the 1920s and 30s. Materials were added to its collections from organizations disbanded in the early years of Soviet power, augmented with personal collections of the nobility. The result is one of the richest collections of historical photography within the archive. The photographic collections from the library of the Marble Palace were added to the archive around the same time. The Marble Palace had belonged to the imperial family before the 1917 revolution, but from 1919 to 1937 it housed the Academy for the History of Material Culture which was the precursor to the current Institute for the History of Material Culture at the Russian Academy of Sciences (IHMC RAS).

The two views of Oxford originate from the Marble Palace library collection. It was only in the 1990s that it became possible to openly say that this was the personal photo collection of the Grand Dukes, General-Admiral Konstantin Nikolayevich (1827-1892) and his son, Konstantin Konstantinovich (1858-1915). They were the son and grandson of Tsar Nicholas I (1796-1855), and Konstantin Konstantinovich became President of the Russian Academy of Sciences. Between 1924 and 1932 several thousand photographic documents (mostly prints) were received by the photographic archive of the State Academy for the History of Material Culture. 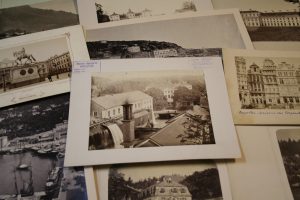 The two Talbot photographs were accepted as part of the first lot in 1924. The collection contains carefully selected high-quality photographs of monuments of architecture and art, magnificent panoramic and ethnographic images, primarily of the Russian Empire, but also of Western European and Asian countries. The collection features real chefs-d’oeuvre of Russian and European photographs by famous masters such as Eduard Baldus and the Bisson Brothers, Alinari Brothers, Paul Nadar and Lydia Poltoratskaya. The two talbotypes are held in an album that was created by archive staff during scientific and technical processing of individual photographs. The album includes photographs of various European cities, few of which can be dated to earlier than the 1870s.

One of the most difficult questions is how did William Henry Fox Talbot’s photographs end up among the Grand Dukes’ collections? At present, we can only make a guess, but perhaps the answer can be sought in the original owners’ biographies. As the talbotypes belong to the early part of the collection their acquisition can probably be linked to Grand Duke Konstantin Nikolaevich.

Konstantin Nikolayevich was one of the greatest statesmen in Russia at the time. He actively participated in the development of liberal reforms in the 1860s. Having received an excellent and versatile education, he was well-versed in diverse areas of culture, science and art. Undoubtedly, a popular, progressive and fast developing new invention like “photogenic drawing” could not leave him indifferent. Konstantin Nikolayevich’s outstanding photograph collection demonstrates that he appreciated the new art of photography highly. He also travelled extensively, which contributed to the constant replenishment of his photo collection. The Grand Duke made about fifty voyages, during which he visited many cities in Europe and Asia. In the 1840s and 50s he repeatedly visited England, where, during one of his trips, we believe he bought the two talbotype photographs of Christ Church which are now held in the Marble Palace Library collections in the Scientific Archive of IHMC RAS.