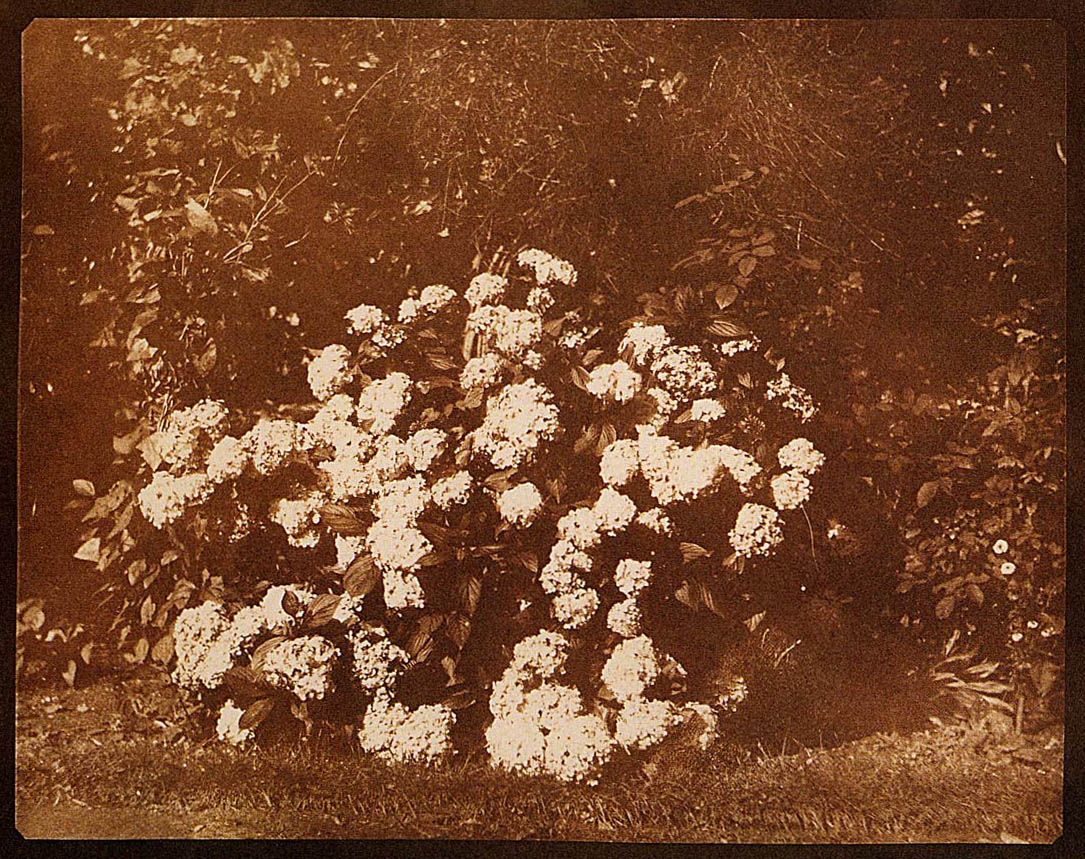 The pompoms of the hydrangea insistently demand the attention of the gardener. Its name, derived from the Greek ‘hydor’ (water) and ‘angos’ (jar or vessel), reflects its copious thirst for water. Hydrangea are at their best when the sunshine is plentiful, as it is here. Most varieties bloom in the spring or early summer but a few linger until autumn.

Simply a sharply-rendered and sunny rendition of this bush would have been satisfying, if a bit static, but Talbot has enlivened his image by careful framing. Counterbalancing the burst of flowers is a dancing string of little white blooms on the right – it is as if clusters of butterflies were mesmerized by a rising snake.

With such a flashy countenance, it is not surprising that in the Victorian era hydrangea could symbolize vanity. However, a bouquet of hydrangea could also express appreciation for the recipient’s past understanding. After the struggles of 1839, was Talbot rewarding his supporters’ patience with the present of a beautiful scene? The Chinese consider the hydrangea to be a symbol of enlightenment, feeling that one can get so lost in the abundance of its petals that insight can be gained by becoming lost within one’s own thoughts. Perhaps this symbolism fits best, for this is a photograph that one can return to again and again without any diminishment of the pleasure of studying it.

Depending on the variety and more especially on the acidity of the soil, hydrangea can range in color from near-white to blue. In capturing this bush, Talbot made good use of one of the characteristics of his calotype negative paper. The paper naturally responded most vigorously to blue light, so either white or blue flowers would have rendered brightly. In fact, for the same reason that television presenters once wore blue shirts in the black & white days (to keep the whites from being too blinding), blue flowers might have recorded with better detail than white ones. In any case, his paper responded very poorly to green light, a frequent problem for early landscape photographers, but something that Talbot made a virtue of here. The luxuriant leaves of the hydrangea bush itself are rendered nicely, with deeply toned contrasting veins, and the subtly darkened gray leaves behind add depth to the scene without distracting from the main subject.

This was a very popular image and must have been printed in some quantity. Note that the corners of the paper negative are gently clipped – they were the most vulnerable parts in handling and softening the corners helped preserve their useful printing life. This particular negative survived all this exposure and remains in good condition. The other two known negatives of this bush, one with slightly tighter framing than here, are both smaller in format.

The title comes from the printed label that Nicolaas Henneman employed for copies offered for sale. He offered three variations, numbered 163-165, hinting perhaps that the three surviving negatives were all used to feed Henneman’s stock.

• Questions or Comments? Please contact Prof Schaaf directly at larry.schaaf@bodleian.ox.ac.uk  • WHFT, A Bush of Hydrangea in Flower, salt print from a calotype negative, ca. 1842. The Larry & Sharon Hite Collection; Schaaf 165. • The variant views are Schaaf 15 and Schaaf 166 and are about one-quarter the size of the present image.