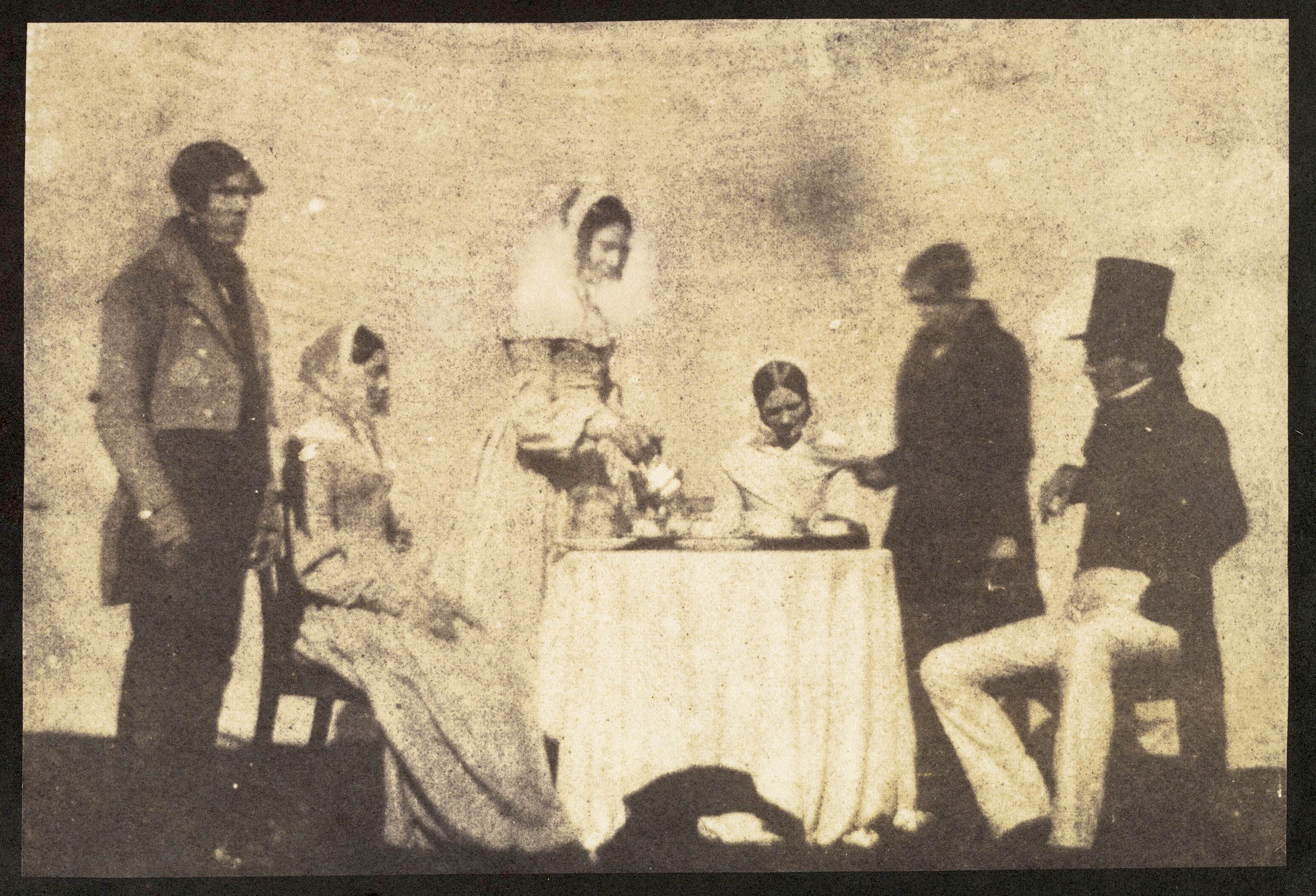 The process of arranging group photographs can fairly be compared to the problem of herding cats.  Unlike drawing, photography at least captures all the players simultaneously, however they stand.  Writing about ‘The Ladder’ in The Pencil of Nature, Talbot explained that “when a group of persons has been artistically arranged, and trained by a little practice to maintain an absolute immobility for a few seconds of time, very delightful pictures are easily obtained. I have observed that family groups are especial favourites: and the same five or six individuals may be combined in so many varying attitudes, as to give much interest and a great air of reality to a series of such pictures.”

In spite of the need “to maintain an absolute immobility for a few seconds of time,” there remains a charming verisimilitude to this lively tableau vivant.  A large sheet of hanging cloth divorced the scene from the backdrop exterior of Lacock Abbey while still permitting the use of bright sunlight. Members of the domestic staff – and perhaps a sister and a wife – have been recruited to form the theatre company. In re-creating a typical household scene, Talbot was reflecting a more modern view of tableaux. During the 19th c. these had evolved from their strict German roots, inevitably tied to classical and literary scenes, emerging instead as parlour entertainments drawing their inspiration from the modern world around them.  They were ‘selfies,’ writ large. Tableaux were familiar within the Talbot household; his half-sister Horatia wrote him in 1830 that “we had tableaux again last Tuesday at Lady Dudley Stuarts. They had me act Rowena in the last scene in Ivanhoe.”

The lively placement within this carefully composed scene is anchored by the master of the household, seated in his tophat. One is tempted to think that this might be someone like the Rev Calvert R Jones, or perhaps Henry’s Welsh cousin, Christopher ‘Kit’ Rice Mansell Talbot, but he may just possibly have been a visiting artist. In May of this year, Talbot’s publisher Thomas Longman had written to say that “I have this morning called on Mr. J. Calcott Horsley, a nephew of Sir A Calcott, who has taken a very great interest in your process and will be quite willing to assist in the arrangement of some out of door tableaux,” showing recent plates from The Pencil of Nature, “ with which Mr. Horsley is delighted.” Horsley, a brother in law of I K Brunnel, was busy at the time designing frescos for the new Houses of Parliament, but he immediately sent a note to Talbot saying that he had heard from Longman and would “have much pleasure in meeting you at his house on Sunday next.”

This picture is so engaging that we should be reminded that the Catalogue Raisonné will not only serve to locate such images, but will also be an item-level record of each hand made negative and print. This image was included in the 1934 exhibition at Lacock Abbey organised by Matilda Talbot and her brother (it is in the middle of the cluster of portraits and groups on the right). Lacking the holes that would have resulted from pinning it to the screen, the present print is not the one displayed then. Perhaps that punctured print will turn up some day, but for now, this one is the only known survivor. But it is a particularly interesting one. Very rarely are we able to trace the exact paper used in a particular print.  Close examination shows that this one has tracings of gilding along the edge. Just a fortnight after this negative was made, Talbot’s wife Constance informed him that “your paper arrived this morning – 20 quires of gilt edged Whatman Turkey Mill 1842 – you said it was to be 1840. In consequence of this difference I have given none to Porter but await your directions. Can the variation in the date be of any importance?”  Like fine wines and malt whiskys, each batch of paper had its own quirks, some beneficial to the photographic chemicals, some catastrophic, and some simply different.  Talbot had his favourites and the present print was made on a prized cache of paper.

Finally, this particular print also has a distinguished provenance. It would have been sufficient lineage to say that it was once in the collection of the distinguished connoisseur, André Jammes, but in more recent years it was owned by the childrens’ book author and illustrator, the late Maurice Sendak. Thinking about Peter Rabbit, he proclaimed that “no story is worth the writing, no picture worth the making, if it is not a work of imagination.” And surely he found Talbot’s imagination here.

• Questions or Comments? Please contact Prof Schaaf directly at larry.schaaf@bodleian.ox.ac.uk  • WHFT, A Group Taking Tea at Lacock Abbey, salt print from a calotype negative, 17 August 1843. The Metropolitan Museum of Art, Bequest of Maurice B. Sendak, 2012,2013.159.50; Schaaf 2755. • Horatia Feilding to Henry Talbot, 2 December 1830. LA30-56, Fox Talbot Collection, The British Library; Talbot Correspondence Document no. 02094. • Thomas Longman to Henry Talbot, 24 May 1843. LA44-29, Fox Talbot Collection, The British Library; Doc. no. 05001. • John Callcott Horsley to Henry Talbot, 25 May 1843. Fox Talbot Collection, British Library, London, Doc. no. 04990. • Constance Talbot to Henry Talbot, 31 August 1843. LA43-75, Fox Talbot Collection, British Library, London, Doc. no. 04872. • The exhibition commemorated the centenary of Talbot’s first successes in 1834, particularly the negative of the oriel window (illustrated in this blog on 5 June of this year). An exhibition and symposium was held at the Abbey on 23 June 1934 and a ‘Centenary Exhibition of Early Photographs and Photo-Engravings”’ was on display from 27-29 July. It appears that most if not all of the interior was filled with screens and tables of photographs. The best visual record of these panels is the set of monochromatic prints from the estate of the late Alexander Barclay, the curator at the Science Museum who collected Matilda Talbot’s 1934 donation from Lacock Abbey; this set of prints was donated to The Royal Photographic Society, now part of the National Media Museum, Bradford.