In previous posts I found myself recoiling from the effects of harsh sunlight, so as August slips by and the summer mellows I find myself withdrawing indoors to contemplate sunlight streaming through a window.  Meanwhile, Geoffrey Batchen’s recent post has given me the courage to choose images which are far from the punchiest of surviving Talbot prints. 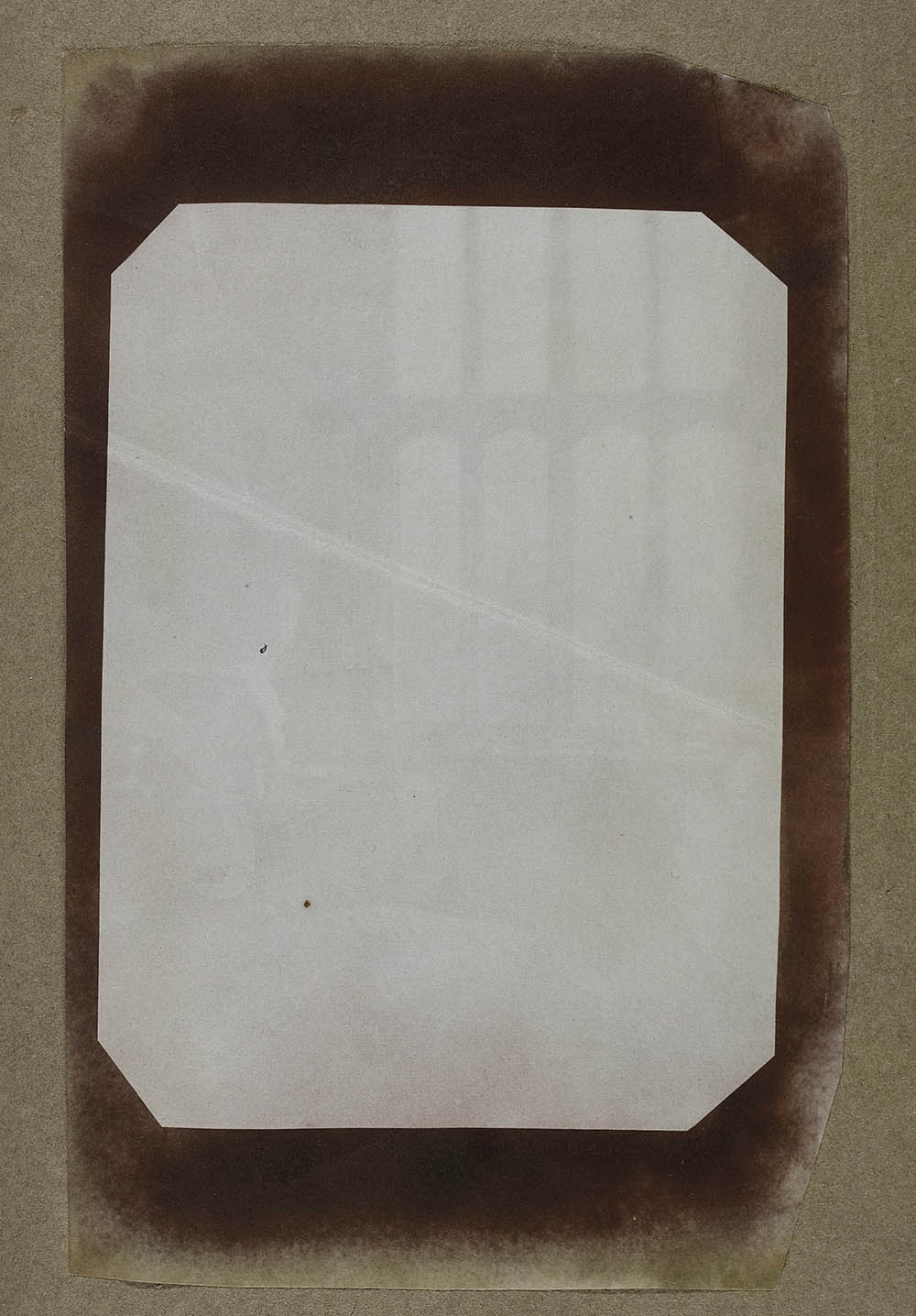 Part of an album, this delicate photograph illustrates the technical difficulties that came with photographing interiors in the early 1840s.  The reduced light levels indoors have resulted in a muted image.  Having said that, the subject is ideal.  A long exposure compensated for the low light, while any length of time the camera needed to sit motionless on the mantelpiece opposite the window was effortlessly matched by the inanimate objects arrayed before it, including our friend, Patroclus.  The recently installed oriel window could almost have been devised with early photography in mind as it was designed to admit the maximum amount of sunlight into a room for as long as possible.  As the earth turned and the sun arched across the sky the window’s bay arrangement was able to take full advantage.  Hence the name, oriel, a gallery or porch.  This was still not enough to prevent a strong chiaroscuro effect in the finished photograph.

What at first looks like sunbeams or lasers being fired across the room are in fact two parallel creases in the paper  made at some point before the print was pasted into the album.  Perhaps the creases were less noticeable in Talbot’s day when the image was stronger, but even so, the fact that Talbot saw fit to preserve the compromised print in an album indicates that he still found it to be of worth.  There is no known negative for this image and only one other print we know of survives. 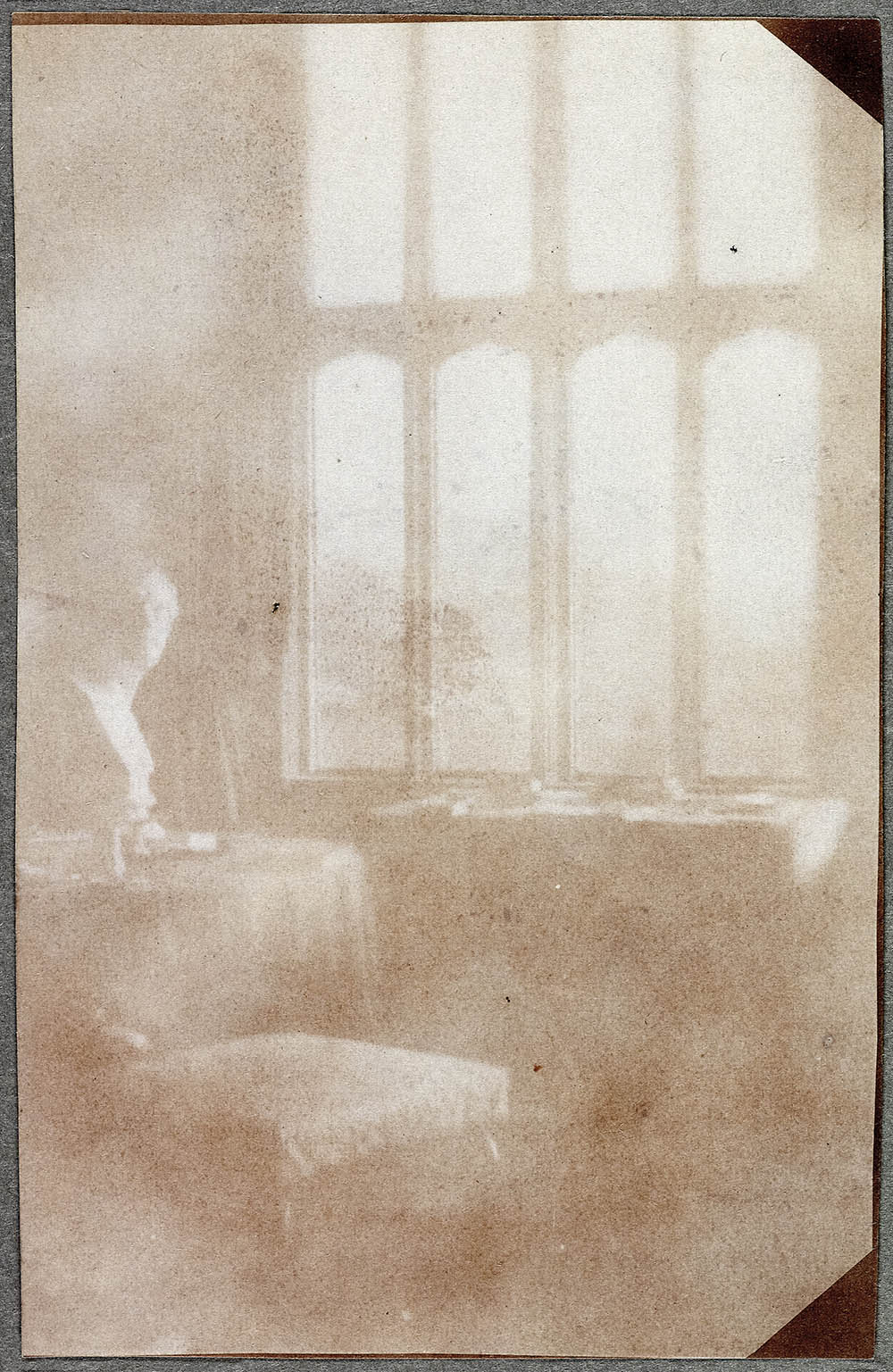 This loose print is not creased and has never been pasted in an album. Talbot often trimmed and cropped his paper negatives and prints, but the rationale for his cropping of this print is difficult to comprehend.  It has the same muted tones and subdued air as the print from the album but its image has remained more distinct.

The more I look at the photograph the more I am reminded of Albrecht Dürer’s, Melencolia I (1514). 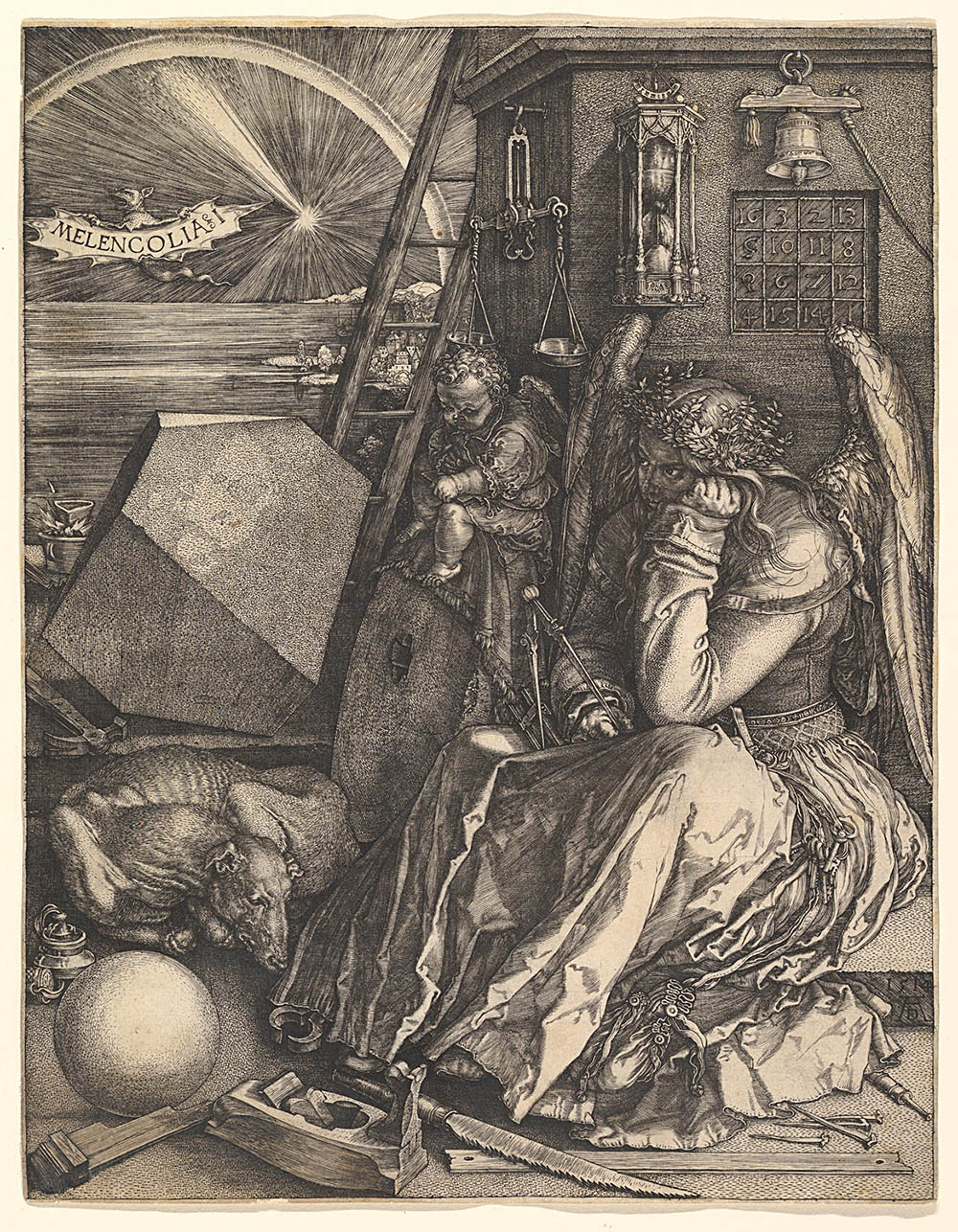 The bust of Patroclus to the left of the composition takes the place of Dürer’s winged figure of Genius, while the cluster of three pieces of furniture correspond to the strange geometric objects scattered throughout the Dürer etching.  The comet that streaks across Dürer’s sky seems to be mirrored by the crease of the Talbot print.

Even the bizarre and unevenly hewn polyhedron in the Dürer seems to echo the uneven clipped corners and edges of the Talbot negative and print borders. I would not suggest that Talbot knowingly made these as direct comparisons. How could that be the case when the crease is the probable result of an accident, while the clipping of corners of negatives and prints was usually done as a simple and practical way of avoiding unsightly dog-eared photographs.  But scholars have theorized that Melencolia I may in some way be an allegory of a self-portrait of Dürer, so perhaps this sunlit interior is in some way an unintentional self-portrait of Talbot.

• Questions or Comments? Brian Liddy can be reached at brian.liddy@bodleian.ox.ac.uk  • Please feel encouraged to contact Prof Schaaf directly at larry.schaaf@bodleian.ox.ac.uk  • WHFT, The Oriel Window at Lacock Abbey, with the bust of Patroclus, c. 1840, salt prints from a photogenic drawing negative, 1937-365/3 and 1937-1546, National Media Museum, Bradford, Schaaf 2317. • The first photograph is from Talbot’s Album No. 3; most of the 45 photographs in the album date from 1840 and 1841. Taken as a whole, the album is a portrait of the Abbey and its estate, from exterior views of the house and grounds, through to leaves of plants (probably grown within the estate) to individual items of glass and ceramics owned by the family. • Although Lacock Abbey was Talbot’s ancestral home he did not grow up there as his mother rented the estate out to make ends meet. In 1826 the tenant vacated and Talbot, his mother and two half-sisters were able to move in. In the coming years the famous oriel and latticed windows were installed substantially altering the south facade of the Abbey and the corresponding interiors – see Talbot Correspondence Document No. 01701.  • Albrecht Dürer (1471 – 1528), Melencolia I, 1514, engraving, The Metropolitan Museum of Art, New York, Harris Brisbane Dick Fund (43.106.1). It was most notably the art historian Erwin Panofsky who considered the print to be an allegorical self-portrait of Dürer. • Talbot produced many variations on the theme of the oriel window with objects often appearing more than once but in slightly different arrangements. See, Oriel Window with Patroclus – interior view, photogenic drawing negative, 23 November 1839, National Media Museum, Bradford 1937-1514; Schaaf 2317, reproduced in Schaaf, Out of the Shadows; Herschel, Talbot & the Invention of Photography (London: Yale University Press, 1992), p. 90. See also  Doc. no. 03988.  • My thanks to Vanessa Torres, Conservator at the National Media Museum for confirming the presence of the two parallel creases and suggesting they are historic as there are no corresponding creases to the album page.