This week’s contribution is courtesy of guest author, Dr Michael Pritchard FRPS, and comes from his home, the beautiful city of Bath in the south-west of England. As Michael shows us, Bath is a special place with many Talbot connections. We are especially pleased to welcome Michael’s post, as regular followers of the blog will recall Larry’s frequent references to his invaluable help, from efforts to resurrect the PhotoLondon website to current photography related news items. Michael’s influential website dedicated to British photographic history is a one-stop-shop where you can find up to the minute photographic developments far beyond the shores of historic Britain. Michael is also the Royal Photographic Society’s Director of Education and Public Affairs. 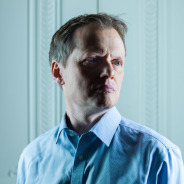 Writing from Bath to her husband, Henry Talbot, at Lacock Abbey, on 31 March 1872 Constance (1811-1880) reported that she had ‘made a wonderful discovery’ that ‘Bath houses should be so cheap!’. As a recent Bath resident I can only wonder at how different the 1870s were when compared to today’s high property prices.

Constance was residing at no. 4 Circus, itself an impressive address, just along from the Royal Crescent, and a place where she, and sometimes Henry and their children, regularly sojourned from Lacock for Bath’s shopping, social and intellectual life throughout the year. She had been discussing property prices with Mr (sic) Calvert Richard Jones (1804-1877) who lived in Lansdown Crescent, in a house which he told Constance that he had paid only £2000 [Footnote 1]. A house there today is in the region of some £3 million. Jones had disclosed that his house had been worth some £300 more and that ‘it is far cheaper to pay the interest of the purchase money than the yearly rent of an unfurnished house’. Constance vowed to meet with a property agent the next day [Footnote 2]. 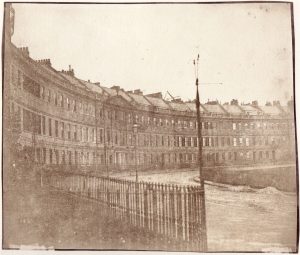 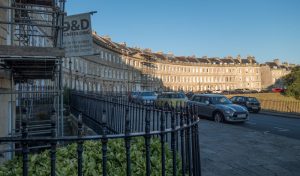 Bath was only some 15 miles from Lacock Abbey, and even in the 1840s would have been a relatively easy journey, but it was a world away from the agricultural economy. Although Bath’s Georgian heyday as a spa and social centre was behind it, the city still retained a vigorous community of well-to-do residents. Its place on the main railway line from London to Bristol, Wales and the south west, and to Oxford, gave it ready access to Britain’s political, scientific and academic communities.

Constance’s letter and a calotype of Lansdown Crescent attributed to Nevil Story Maskelyne (1823-1911) provide an insight to Talbot and his circle, linked through time, location and astronomy [Footnote 3]. 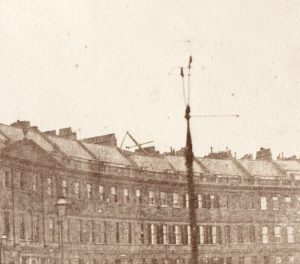 When Maskelyne, who was living in Oxford, visited Bath and photographed Lansdown Crescent in 1847 number 7 was occupied by Henry Lawson FRS FRAS (1774-1855) [Footnote 4]. Lawson had been apprenticed to Edward Nairne, the well-known optician and philosophical instrument maker, but ended up devoting himself to scientific study in Hereford. His apparatus, including an observatory with a Dolland 11-foot achromatic telescope, was removed to Bath in 1841 when a legacy allowed him to relocate to the city. Maskelyne’s calotype shows the supporting structure of the telescope on the roof of No. 7. In a paper published in 1844 Lawson described how he directed that the roof of the house be removed to create a platform for his instruments, half for the astronomical and half for his meteorological instruments [Footnote 5].

Elsewhere in Bath, at an earlier time, the city had been the home of the astronomers William Herschel (1738-1822) and his sister Caroline Herschel (1750-1848) who left in 1782 and 1784 respectively. William’s son, John, would of course become an astronomer in his own right and played an important role in photography, too. 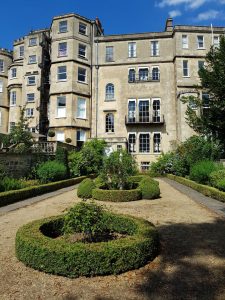 For Constance and Henry, Bath provided a more convenient place than Lacock for cousins to visit and for Henry to meet with like-minded scholars. Maskelyne was described by Constance as ‘friend’ as early as 1843 and would be more closely linked when he married Thereza Llewelyn (1834–1926) in 1858. She was also a keen amateur photographer, and a Welsh cousin to Talbot, the daughter of John Dillwyn Llewelyn. In a letter to Henry announcing the marriage he commented: ‘they have equal pleasure in scientific pursuits and I hope are really well suited to one another’ [Footnote 6].

Constance, particularly, spent a lot of time at no. 4 Circus writing regularly to Henry at Lacock about household accounts, purchases, as well as sending news of visitors and of their children. Reading through the letters one gets a sense that Lacock Abbey was not a place she always enjoyed.

Calvert Jones died on 7 November 1877 at 12 Lansdown Crescent, just two months after Henry Talbot. By then Lawson’s astronomical apparatus had long since been dispersed from Bath, with the 11 foot Dolland telescope going to the Royal Hospital School in Greenwich. Constance was to survive barely three more years, and Maskelyne who had long since put aside photography was living in Wiltshire managing the family estates. His view of Lansdown Crescent depicts a scene that has barely changed over the intervening 170 years, with only the value of property bearing witness to the economic progress and the demand for accommodation in Bath.