Recently, Stephen Harris kindly supplied us with Latin names for many of the botanical specimens Talbot pressed into use to make his photograms. Although Latin was never compulsory in any of the schools I attended, my interest was piqued. So, I called upon that wonder of our age, the internet, to find out more about those Latin names for plants. The results were unexpected and fascinating in equal measure. 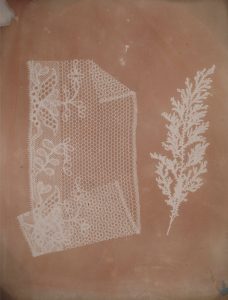 Take for example, Schaaf number 886. I admit this is one of my favourite Talbot photographs. I love the natural plant form juxtaposed with the equally delicate but totally artificial piece of lace. Stephen tells me the botanical specimen goes by the Latin name of Selaginella (Selaginellacae). The internet tells me it is also known as ‘Spikemoss’. Fossilised examples of Selaginella show that this organism has changed very little over millions of years. Some members of the family have remarkable properties which may explain why this modest plant-form has attracted the attention of the United States’ Department of Energy. They have mapped Selaginella’s genome sequence. Could that be because some members of the Selaginella family can survive extreme dehydration over long periods of drought, only to miraculously revive when water returns? I do not know, but plants with this remarkable property are sometimes referred to as resurrection plants.

What did Talbot have in mind when he placed the folded lace fragment alongside the Spikemoss to make this photogram? Why place a plant that hasn’t changed since prehistoric times alongside a delicate lace fragment? I suspect that the lace is not a traditional handmade sample but is a modern machine-made piece.

In 1837 the Jacquard system was first applied to the making of lace with the bobbinet machine. The Jacquard loom system of weaving has been compared to an early form of computerisation as it was controlled by a punched card system, just as early computers were. This means that by the time Talbot made this photogram, machine-made lace was well established and able to produce a high-quality product. Could there have been some correlation between these two seemingly very different items in Talbot’s mind at the time he paired them?  Or was Talbot simply pairing a plant that has not changed since prehistoric times with that delicate modern marvel, a fragment of lace made by a machine?

One of Talbot’s simplest photograms is of a single plant leaf. Thanks to Stephen we now know the leaf is from the Solanaceae family. At the risk of sounding knowledgeable when it comes to the Latin names of botanical specimens (you know where I got this information) the Solanaceae family’s common or garden name is ‘nightshade’. This is a huge and varied family that includes some trees, tomatoes and potatoes, as well as some ornamental plants. When I sought more web-sourced information about the Solanaceae family, my computer screen quickly filled with pretty flowers.

It is thought that the name ‘Solanaceae’ might come from the fact that the flowers of plants from this family often look like the sun (‘Sol’ being the Latin name for the sun). A fitting subject for a photogram by Talbot, as the same sunlight used for leaf photosynthesis converts a prepared sheet of paper into a photographic image.

Some time back I wrote about how my job on the Talbot project had reduced me to looking at pictures of kittens on the internet. Flowers don’t alarm me quite as much as kittens, but I still don’t like the idea of my colleagues seeing my computer screen when it is crowded with pictures of flowers. And yes, I do hold Henry Talbot personally responsible. If only he hadn’t perfected his photographic process, I wouldn’t have to contend with cute kittens and pretty flowers invading my web searches, especially at work.

• Questions or Comments? Brian Liddy can be reached at brian.liddy@bodleian.ox.ac.uk • WHFT, Fragment of lace and botanical specimen, Selaginella (Selaginellaceae); Schaaf 886. • Some insight into the value of mapping the genome of Selaginella can be found at https://www.osti.gov/sciencecinema/biblio/1038849. (If you are like me, you will smile when the automated subtitles struggle to keep up with what the speaker is actually saying.) • Close up view of Jacquard loom; By User Ghw on en.wikipedia [Public domain], via Wikimedia Commons. • Internet search results for term “Solanaceae“.